How to watch Chicago PD season 8 online from anywhere 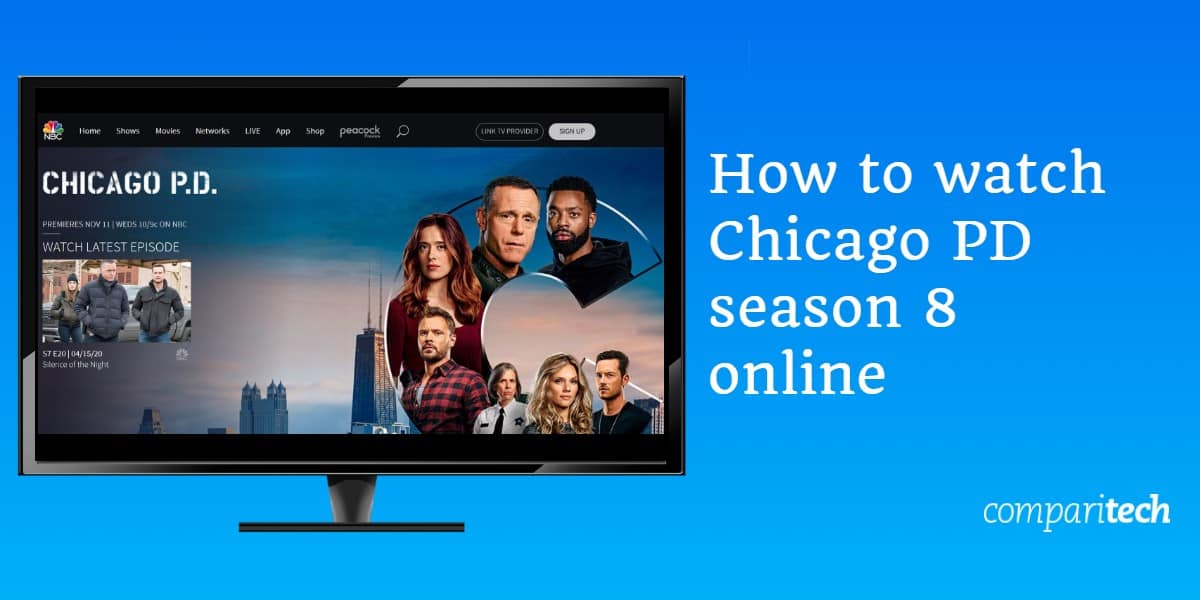 Season eight of Chicago PD will premiere at 10 PM EST (7 PM PST) on November 11. We saw some pretty significant changes to the show’s plotlines and cast throughout season 7, but with another three seasons ordered, fans can rest assured that there’s plenty left to look forward to. Instead of 22 episodes, there’ll be just 15 this year, but on the plus side, you can watch them all online for free; read on to find out how.

It’s worth mentioning that we’ll only be recommending official sources for watching Chicago PD. This show is hugely popular, so it’s likely that unauthorized sources will be available. However, these generally offer an inferior experience, with low-resolution video and unreliable streams. Luckily, you can watch the new series of Chicago PD for free, so there’s really no need to resort to shady unofficial sources.

Chicago PD will only be broadcast on geo-restricted streaming services. As such, you’ll need a Virtual Private Network (VPN) to watch it on your usual home services if you’re currently traveling outside of the US.

New to VPNs and not sure how to get started streaming Chicago PD? It’s much less difficult than you might think.

Here’s how to watch Chicago PD Season 8 online, from anywhere:

Chicago PD will be broadcast live, so it’s a good idea to spend some time making sure your VPN works as expected ahead of the premiere. This way, you’ll have plenty of time to get help with any technical issues and won’t have to miss the start of the new season.

How to stream Chicago PD for free on US TV

There are a couple of ways to watch Chicago PD season 8 online. Your first (and likely best) option is NBC: if you have a cable subscription or an account with a supported streaming service (Hulu, fuboTV, YouTube TV, or Sling TV), you’ll be able to watch new episodes live. Alternatively, you can just wait until the following day, since NBC allows you to stream the last five episodes on-demand, completely free. You don’t even have to create an account!

Hulu will also be getting new episodes the day after they air, but there isn’t much reason to watch on this platform given that NBC lets you watch for free. Further, NBC currently offers seasons 6 and 7 on-demand, whereas Hulu only has season 7.

If you’re looking to start watching from the beginning, your best bet is Amazon Prime Video. This is the only major streaming service to offer the first five seasons, and if you’re already a Prime customer, it’s included for free. Otherwise, it costs $8.99 USD per month, after a one-month trial.

The streaming platforms above are all region-locked. This means that if you’re outside of the US at the moment, you’ll need a VPN to be able to use them. ExpressVPN offers a 30-day money-back guarantee, meaning you can try it out completely risk-free and simply claim a refund if it fails to impress.

Where else can I watch Chicago PD?

While there’s no word on an international release for season 8, it’s possible to stream older seasons in quite a few other countries. Here’s how to stream Chicago PD wherever you are:

Historically, Chicago PD has aired on Sky, and if this continues, subscribers will be able to watch new episodes online via the Sky Go app. Given that all seven prior seasons are available on Now TV, it seems likely that British fans will be able to stream season 8 without cable as well. Now TV’s Entertainment pass costs £9.99 per month and offers a seven-day trial.

If you wanted, you could purchase seasons 1–7 on Amazon Prime Video for around £14.49 each. However, this is not only expensive, it’s essentially pointless since you can stream the same episodes far more cheaply on Now TV.

Sky Go and Now TV are both geo-restricted. If you’re traveling outside of the UK, you’ll have to connect to a British VPN server to use them.

The good news is that Australian fans can watch the first six seasons of Chicago PD on Amazon Prime Video. This service costs $6.99 AUD per month and comes with a 30-day trial. Unfortunately, though, the only way to stream season 7 is to buy it on the Microsoft Store for $34.99. To make matters worse, there are no details on when we can expect to see season 8 arrive.

Amazon Prime Video changes its content based on your location. This means that if you’re not in Australia, you may not be able to stream Chicago PD. However, you should be able to access the Australian library from anywhere by connecting to a VPN.

From November 11, CityTV will be showing new episodes at 10 PM EST  — the same time that they’re broadcast in the US. If you have a cable TV subscription, you can watch online at no added cost. Unfortunately, there’s no support for over-the-top providers just yet, making it effectively impossible to stream season 8 online without cable in Canada. On the plus side, there’s no need to worry if you miss an episode since they’re added to the service’s on-demand library shortly after airing.

Canadian fans get the short end of the stick when it comes to streaming past seasons of Chicago PD online. Amazon Prime Video ($7.99 CAD per month) has the first four seasons, and ICI Tou TV ($6.99 per month) has the first two in French, but that’s it. To watch later episodes, you’ll have to purchase them on the Google Play Store ($1.99 per episode) or iTunes ($29.99 per season).

These platforms are geo-restricted, but you can access them as normal while traveling by connecting to a Canadian VPN server.

What should we expect from the eighth season of Chicago PD?

The show’s writers certainly have their work cut out for them, with a love triangle and a separate “will they, won’t they” relationship between Hailey and Jay to address. Still, with the show green-lit for at least another three seasons, we may not see any resolution right away. Plot-wise, the teaser trailer hints that Kevin will face repercussions both in his personal and professional relationships for his actions in the season 7 finale.

The other major change is that Lisseth Chavez, who plays Vanessa Rojas, will not be returning, having landed a regular role on DC’s Legends of Tomorrow. There are no details on who’ll be replacing her as yet, so you’ll just have to tune in to find out.