Whether you’re living in Panama or going there for work or a holiday, most websites and online services can be accessed without issue. However, unrestricted access doesn't keep you safe when accessing your accounts over public Wi-Fi networks and you can still be faced with content geo-blocking. We look at how a VPN can provide you with additional layers of security and access to restricted content and suggest some of the best VPNs for Panama.
Mark Gill TECH JOURNALIST, VPN AND PRIVACY SPECIALIST 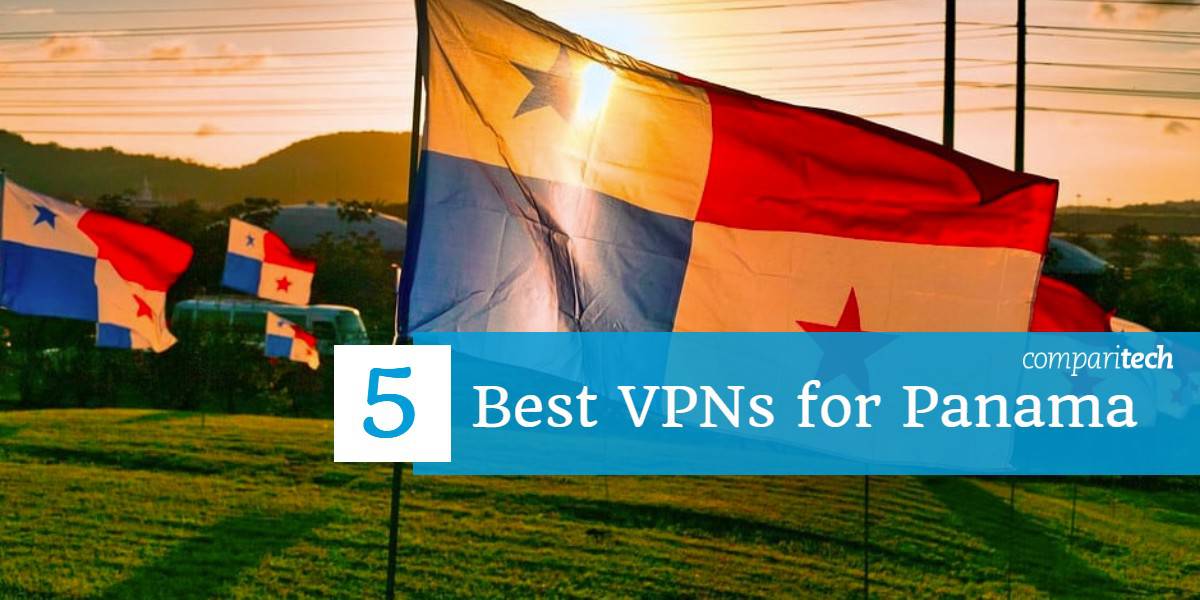 VPN stands for “virtual private network”. A VPN allows you to connect your device (this may be anything from your desktop computer or laptop to your mobile phone) to one of its servers. In doing so, all traffic going to and from your device is encrypted and routed through the VPN server.

Not only does a VPN serve to protect your anonymity by hiding your IP address, it also lets you unblock geo-restricted content in other countries. For example, if your VPN in Panama has servers in the USA, you might be able to unblock content on streaming services such as Netflix US, Hulu, and Amazon Prime Video.

Just in case you’re short for time, here are the 5 best VPNs for Panama (we cover each of these in more detail further down):

What’s the best VPN for Panama?

There are plenty of VPNs that you can use in Panama, free and paid. However, a number of factors influence the quality of a VPN. These include the number of servers, the ability to unblock major streaming sites, the availability of customer support, and so on. When choosing the 5 best VPNs for Panama in 2018, we looked for those that met the following criteria:

ExpressVPN has an extensive network of servers and is known for its high speed connections. Whether you live in Panama or you’re there for a holiday, ExpressVPN ticks all of the boxes. ExpressVPN has a network of more than 2,000 servers in 94 countries, including Panama. This is a popular choice due to the sheer number of streaming services it can unblock including Netflix, HBO, Hulu and Amazon Prime.

What we’ve noticed time and again is that ExpressVPN lets us stream HD videos with ease. Should you have any issues, ExpressVPN offers arguably the best customer support we’ve encountered in a VPN. Our testing of the 24/7 live chat feature resulted in a reply and resolution to our problem in minutes. ExpressVPN’s apps are designed to be user-friendly and are available for a wide range of operating systems. There’s even the option of adding a browser extension should you wish.

ExpressVPN can unblock many websites but it can also keep you safe online. Based in the British Virgin Islands, ExpressVPN isn’t subject to data retention laws and keeps no identifying logs. When you combine this with 256-bit AES encryption, DNS leak protection, a kill switch, and split tunneling, you’ve got a highly secure VPN that provides peace of mind when browsing online. It’s worth mentioning you can pay for ExpressVPN in Bitcoin which, when used with a Bitcoin mixing service, allows for anonymity.

BEST VPN FOR PANAMA:ExpressVPN is our top recommendation.  Servers in 94 countries including Panama. Fast speeds, strong security and excellent customer support. Try it risk free with the 30-day money-back guarantee.

NordVPN is based in Panama where there is no mandatory data retention law. This is a VPN with more servers than most (over 5,200 in 63 countries at the time of writing). The advantage of this is that NordVPN can unblock most geo-restricted content you’re likely to come across. With so many servers available, you’re unlikely to ever have performance problems. Indeed, our testing of NordVPN with popular streaming sites such as Netflix showed it to be fast and consistent without buffering or lag.

With a NordVPN account, you can protect all of your internet-connected devices thanks to the availability of easy to use apps. Notably, NordVPN lets you secure up to 6 devices simultaneously, which is particularly good value. Aside from having the option of servers that offer double encryption and Onion over VPN, NordVPN has 256-bit AES encryption, DNS leak protection and a kill switch. What’s more, it has a no logs policy, which means your data remains private.

PANAMA-BASED VPN:NordVPN offers excellent overall security, unblocks many streaming sites and has a network of over 5,000 servers worldwide. 30 day money back guarantee.

CyberGhost lets you access 60 countries and over 3,000 online servers from Panama. This is a great choice since it offers high speeds and reliable connections for a highly competitive price. When you combine this with the 45-day money-back guarantee offered, CyberGhost is an option well worth considering. It’s particularly well suited to beginners since it offers apps that make setting up a VPN and connecting to a server nice and simple. Aside from Netflix, CyberGhost is also able to unblock Amazon Prime Video and BBC iPlayer.

We found CyberGhost’s chat support to be very efficient. We made an enquiry via the live chat feature and quickly had a helpful response. However, it’s CyberGhost’s security that really stands out among VPNs. This VPN provider offers security in the form of 256-bit AES encryption as well as DNS leak protection and a kill switch. Located in Romania, CyberGhost is not a member of 14 Eyes, an intelligence sharing network. It has a strict no logs policy. You can secure up to seven devices on one CyberGhost account – more than most VPNs allow.

GOOD BUDGET VPN:CyberGhost is one of the safest VPNs on the market. Offers good speeds for streaming and has live chat support. 45-day money back guarantee.

IPVanish has no shortage of servers with 1,100 spread across 60 countries. This means you’ll be able to unblock geo-restricted content from around the world. Where IPVanish particularly stands out is that it lets you connect up to 10 devices simultaneously from a single account. As such, this VPN provider is perfect for families who have multiple devices to secure. When it comes to performance, IPVanish is very reliable and has more than enough speed to stream high definition videos.

Another thing worth noting about IPVanish is that this VPN owns its servers, rather than renting them like many VPNs. IPVanish servers can unblock popular streaming sites such as Amazon Prime Video, BBC iPlayer and HBO. Known to have a strict no logs policy, IPVanish is one of the safer VPNs on the market today. It also has 256-bit AES encryption, DNS leak protection and an internet kill switch. Live chat support is also offered should you have any issues.

PERFECT FOR FAMILIES:IPVanish can be used on up to 10 devices simultaneously. Also provides live chat support. 7-day money back guarantee.

PrivateVPN excels when it comes to unblocking popular streaming sites. You can use it to watch anything from Netflix to BBC iPlayer to Amazon Prime Video. It may only have around 100 servers but these are located in 57 countries around the world. Performance from this VPN is impressive and it stands out for its fast speeds and reliable connections. What’s more, you can connect up to 6 devices simultaneously.

We like the PrivateVPN apps, which are very easy to navigate. Beginners will appreciate the simple menu while users seeking more configuration options can head to the advanced menu. It’s well worth noting that PrivateVPN offers good customer support. While the live chat feature isn’t available 24/7, we usually receive very quick responses to our enquiries. PrivateVPN offers all of the security features expected from a quality paid VPN. These include 256-bit AES encryption, a kill switch and DNS leak protection. It also has a zero data logging policy.

PrivateVPN apps are available for Windows, Mac, Android and iOS. Manual setup is required for Linux and routers.

Is it legal to use a VPN in Panama?

It’s perfectly legal to use a VPN in Panama. Panama is a country with no internet restrictions.  In fact, NordVPN – one of the biggest VPNs in the world – is actually based in Panama. This is due to the fact that Panama has no mandatory data retention laws. It’s also not part of the 5 Eyes or 14 Eyes intelligence alliance. However, you’re still vulnerable to hackers and spammers when browsing and you’ll still encounter region restricted content in Panama. For these reasons, a VPN in Panama is a sensible solution.

Can I use a free VPN in Panama?

While you can use a free VPN in Panama, we don’t advise it. In our experience, free VPNs are often very slow due to network congestion and data caps. This makes streaming videos a frustrating experience. Even if performance happens to be good, many free VPNs can’t unblock streaming services such as Netflix. That’s because Netflix and many other websites are now implementing anti-VPN measures. For this reason, only the best paid VPNs consistently find ways around blocks.

Free VPNs rarely offer customer support. Rarer still is a free VPN offering 24/7 live chat. So if you have a problem with a free VPN, you’re usually on your own! Perhaps most important of all, free VPNs are not as safe. Very few have advanced encryption or features such as a kill switch (this protects your data from being leaked should the VPN connection drop). What’s more, some free VPNs have been known to infect your device with malware and even sell your data to third parties.

A quality paid VPN features plenty of fast servers, is able to unblock the most popular websites, offers live chat support and provides a high level of security. In short, the contrast between free VPNs and the best paid VPNs for Panama is night and day.