Best VPNs for HBO GO so you can watch from anywhere

We take a look at the best VPNs for HBO GO so you can watch abroad, when outside of the United States. There's no need to miss Game of Thrones, Big Little Lies or any of your other favorite shows!
Paul Bischoff TECH WRITER, PRIVACY ADVOCATE AND VPN EXPERT 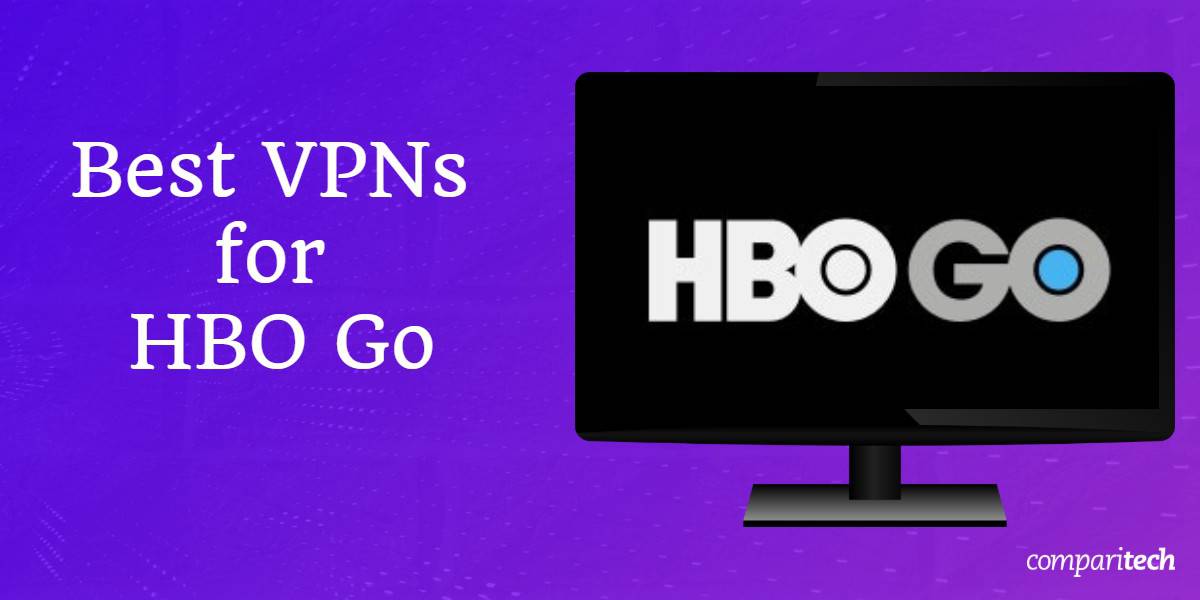 HBO GO is a great way for HBO subscribers to watch all of their favorite movies and original television series such as Game of Thrones while away from home. That is, unless, you’re traveling outside the United States. Even with a premium cable TV subscription package that includes HBO, the HBO GO streaming service cannot be accessed from any country other than the US. Attempting to do so will result in an error message: “Not in Service Area” or “To access HBO GO, you must reside within the fifty states of the United States of America.”

If you reside in this area and are still experiencing difficulties, please contact your television provider.

But there is a workaround to access HBO Go outside America from any overseas destination. By using a VPN, you can get an American IP address that will make HBO GO believe you are located within the US. Short for Virtual Private Network, a VPN encrypts your internet traffic and routes it through a remote server in a location of your choosing. By connecting to a VPN server location in the US, you can easily unblock HBO GO and watch your favorite HBO shows from anywhere in the world.

Note that not all VPNs work with HBO Go as it actively blocks many VPNs.

We get into some detail about each of the VPNs that made this list, but if you’ve not got time to read through the rest of this article, here are the best VPNs for watching HBO:

The Best VPNs for HBO GO

We ranked our list of the best VPNs for HBO GO based on the following criteria:

If you want to be sure to catch the latest episode of Westworld before it gets spoiled on Facebook or Twitter, NordVPN has your back. You can live chat support or just check the knowledge base on the company website to find out which servers work best for a particular streaming service.

It operates over 1,700 servers in the United States alone. It’s also capable of unblocking Netflix, Hulu, and BBC iPlayer among others. NordVPN touts a true zero logs policy and uses military-grade encryption on all OpenVPN connections. You can connect up to six devices at the same time on a basic subscription.

Apps are available for all major platforms including Linux, Windows, MacOS, iOS, and Android.

BEST VPN FOR HBO GO:NordVPN is our top choice. A secure service that works reliably with HBO GO and most popular streaming sites. Connects up to 6 devices simultaneously. Comes with a risk-free 30-day money back guarantee.

Surfshark is a strong choice for anyone looking to stream geo-blocked content abroad. It has over 1700 servers in 63+ countries, provides high enough speeds for HD streaming, and in addition to unblocking HBO Go, it also lets you use major services like Netflix US and Hulu. What’s more, Surfshark permits an unlimited number of simultaneous connections, so you’ll be able to stream whatever you want, wherever you are, on whichever device you prefer.

Luckily, this VPN is as secure as it is versatile. It keeps your activities hidden from prying eyes using 256-bit encryption, protection against IPv6, WebRTC, and DNS leaks, and a kill switch (which automatically stops all traffic should your connection drop suddenly). Surfshark doesn’t log any personally identifiable information, although if you’re concerned about privacy, you can register anonymously (by paying in crypto and using a throwaway email address). Live chat-based support is available 24/7.

ExpressVPN operates servers in well over a dozen locations in the US alone, and in 94 countries worldwide. You really can’t go wrong here. Speeds are fast. Security is cutting edge.

The company keeps no logs of your activity or IP address. Live customer support is available all day every day, so if HBO has blocked a server, just ask the staff which one to connect to.

Not only can ExpressVPN unblock HBO GO, but it also works with US Netflix, Hulu, BBC iPlayer, and Amazon Prime Video.

Apps for all major platforms, including Windows, MacOS, iOS, Android, and even Linux, are easy to use so you can start streaming the first episode of your favorite show as soon as it is broadcast.

GREAT FOR STREAMING:ExpressVPN is quick and secure. Reliably unblocks HBO GO as well as many other streaming services. Exceptional speeds for buffer-free HD viewing along with total security and privacy. Has a 30-day money back guarantee.

IPVanish owns, rather than rents, its huge global network of servers. That includes eight locations in the United States that you can connect to when you want to stream an episode of High Times. You can view a server’s current load and capacity right in the app.

IPVanish has a zero logs policy, meaning it doesn’t record any of its users’ activity or connection logs. 256-bit AES encryption will keep all of your traffic in a secure tunnel. Customer service usually replies within four hours of submitting a ticket. Apps are available for Windows, MacOS, iOS, and Android.

NO CONNECTION LIMITS:IPVanish has a large network of servers. Generally solid for watching HBO GO. Adhere to the highest standard of privacy but can struggle with unblocking some popular media streaming sites. 30-day money back guarantee.

VyprVPN is another top choice for Americans living abroad. Even if you’re in China, the service can unblock HBO GO in addition to Netflix and Hulu. For an added fee, you can avail of the proprietary Chameleon protocol to further obfuscate your connection to ensure that your Internet Service Provider can’t detect whether or not you’re using a VPN.

Only the best encryption standards are used, although VyprVPN does record the user’s source IP address when they connect. Other than that, privacy and security are airtight. Live chat support is available on the website if you run into any issues when trying to stream Season 2 of Insecure.

PrivateVPN, not to be confused with Private Internet Access, is a relative newcomer in the VPN space. Despite that, it’s proven itself to be a competent unblocker of media streaming services like HBO GO, Hulu and Netflix.

Live chat is available during business hours. PrivateVPN has a smaller network of servers than others on this list, but don’t let that dissuade you–it ranked near the top in our speed tests.

A single account lets you connect up to six devices simultaneously so everyone in the house can watch Veep at the same time. The service keeps no logs.

GREAT SPEED:PrivateVPN is a good family choice. Unblocks HBO GO shows and allows up to 6 devices on the same account. Small network of servers but fast connections. 30-day money back guarantee.

How to watch HBO Go outside the US

Even if you’ve never used a VPN before, getting started is simple. Just follow our step-by-step guide below to start watching HBO Go Abroad.

Here’s how to watch HBO Go online from anywhere with a VPN:

Free VPNs abound, but HBO GO users should probably avoid them. HBO takes an aggressive stance towards VPNs and frequently blocks them. Even if you manage to find a free VPN server that works, it probably won’t last.

Many free VPNs are out to collect your personal data and sell it to advertising companies. Some even inject tracking cookies and advertisements into your browser. This is a huge violation of privacy and defeats the purpose of using a VPN.

One of the core purposes of using a VPN, other than unblocking streaming services, is to improve privacy. Unfortunately, some big names in the VPN space have done just the opposite.

PureVPN recently handed over logs containing personally identifying information to US authorities that led to the arrest of a man who attempted to use the service to hide his activity. PureVPN advertises itself as a logless service when in fact it retains users’ real IP addresses, which was enough to charge the man with cyber stalking. While we don’t condone illegal behavior, PureVPN is not transparent with its users about its privacy policy.

Hola is a peer-to-peer proxy service posing as a VPN. Instead of using centralized servers like everything else on this list, it uses the idle bandwidth of its users’ computers. This can run up your data usage, make you responsible for other people’s activity, and sacrifice your online privacy. At one point, the company infamously turned all of its users computers into a giant botnet used to carry out massive distributed denial-of-service (DDoS) attacks on websites.

Note that HBO GO is a separate service from HBO Now. HBO GO requires a premium cable TV subscription package that includes HBO. HBO Now is a standalone streaming service that doesn’t require cable. If you have an HBO Now subscription and are traveling abroad, these VPNs should work for you as well, or you can check out our list of the best VPNs for HBO Now.

The apps from the VPN providers in our list will work on a web browser like Google Chrome or Firefox, but you may run into issues when using the HBO GO app on a smart TV, set-top media streaming box, or the mobile app on Android and iPhone. HBO GO can force its app to use different DNS servers than what the VPN uses, which gives away the device’s true location.

If you’re having difficulties, we recommend watching on a web browser instead of the app. Roku, Chromecast, Amazon Fire TV and other set-top boxes don’t have web browsers, so you need to set up the VPN on a router. You can either do this on your home wifi router if it supports VPNs, or configure a virtual router on your laptop. We’ve got tutorials for how to configure a VPN-enabled virtual wifi router using Windows and MacOS.

⭐Is it legal to access HBO GO from outside America?

It is not illegal to access HBO Go from outside the USA, but it is against HBO's terms of service, and could result in account termination.

In order to sign up for HBO Go, you need a cable subscription that already includes HBO. If not, opt for HBO Now or HBO Max, which offer standalone streaming subscriptions.

If you have HBO on cable...

⭐Does HBO GO stream in 4K with a VPN?

Not all VPN providers can ensure enough stable bandwidth to stream HBO Go. This will largely depend on your location and choice of VPN. NordVPN is the fastest VPN in this list as of time of writing, so it has the best chance of being able to stream 4K UHD video.