How to watch NFL Draft 2021 free online (from Anywhere)

The 2021 NFL Draft will be live streaming on ABC, ESPN, the NFL Network, and worldwide through NFL Game Pass. We explain how to watch online for free from any location or country.
Sam Cook Data journalist, privacy advocate and cord-cutting expert 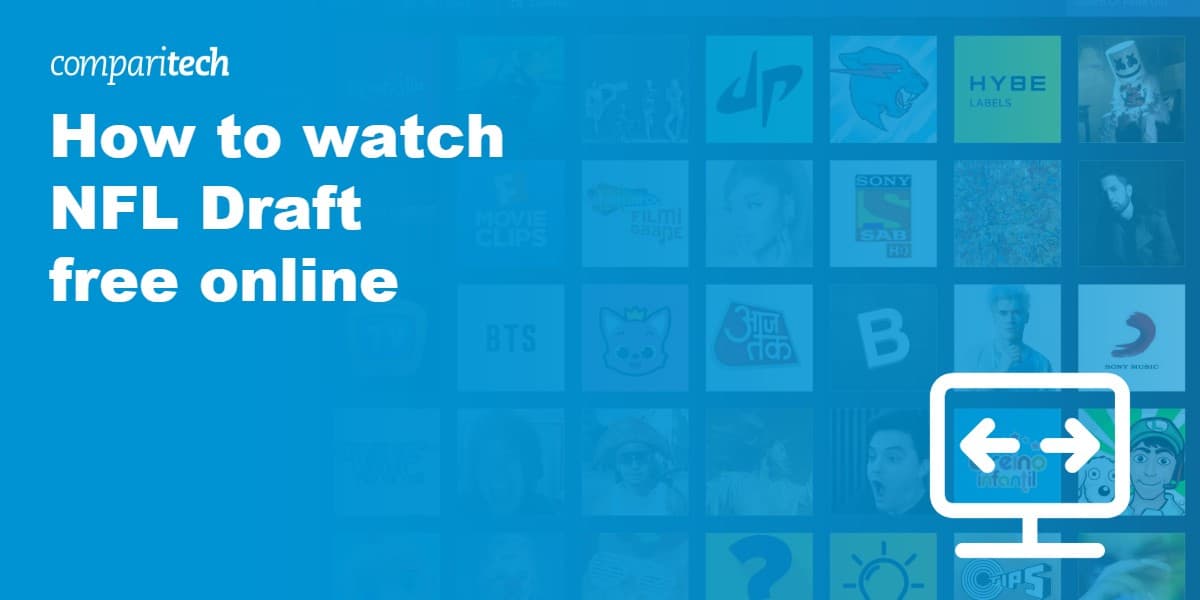 The 2021 NFL Draft will live stream online from Thursday, April 29 to Saturday, May 1. Fans can watch the NFL Draft in the US, Canada, the UK, or abroad to see which college stars or newly independent agents will turn into the NFL’s hottest draft picks for the upcoming 2021-2022 NFL season and beyond.

You can even watch the 2021 NFL Draft online free thanks to a few key streaming options.

Important note: Our guide only recommends official sources for the 2021 NFL Draft. The NFL Draft is a highly anticipated event for NFL fans, but the broadcast is often streamed through unofficial sites. These sites may also hide malware and adware or may serve as a gateway to other privacy and security threats.

Meanwhile, unofficial sources won’t offer the best streaming quality and are more likely to go offline unexpectedly. As the 2021 NFL Draft is available through numerous official sources, there’s no need to turn to sites that may put you at risk or cause you to miss out on the action. We recommend only official options, some of which may be free and accessible from anywhere in the world.

If you’re traveling abroad, you may need to use a VPN to watch the 2021 NFL Draft on your usual services.

How to watch the 2021 NFL Draft online with a VPN

The NFL Draft was previously only broadcast in the US. However, thanks to negotiated contracts, NFL Game Pass is now a viable option almost anywhere in the world to watch not just one but every round of the 2021 NFL draft online. US fans who want to use NFL Game Pass to live stream the 2021 Draft will need a VPN.

Here’s how to watch the 2021 NFL Draft live stream online:

That’s it! If you find a VPN connection is not working to help you bypass region-locking, try clearing your cache and cookies in your web browser, closing the browser completely, and then opening up a new session. You may also want to try running in a private browsing window, such as Chrome’s Incognito mode, or Firefox’s Private Window.

NordVPN is offering a fully-featured risk-free 30-day trial if you sign up at this page. You can use the VPN rated #1 for streaming the NHL Draft games with no restrictions - great if you’re looking to stream the games while traveling abroad.

Many mobile apps now require you to verify your location using GPS. There is often no effective bypass for this, so we recommend sticking to using a web browser, or a TV-connected device, such as the Amazon Fire TV. (Note that there are no VPN apps for the Roku or Apple TV.)

Let’s explore some of your best options to watch the 2021 NFL Draft online from anywhere in the world, including free options.

Where to watch the NFL Draft 2021 free online

The best news about the NFL Draft this year is that it’s completely free to watch with free trials. Although several pay-TV channels will be offering streams, you’ll be able to watch free with NFL Game Pass pretty much anywhere in the world. Otherwise, you can sign up for service with one of several other alternatives, such as Sling TV, fuboTV, YouTube TV (in the US), or DAZN (for fans in Canada) or Sky Sports (in the UK).

NFL Game Pass will have the NFL Draft live streaming in every country except one: the US. That being the case, we have two recommendations:

1. If you’re outside the US, sign up for NFL Game Pass and watch the NFL draft when it’s streaming in your time zone. This is simple enough. Just load up the NFL Game Pass website, create a free account the day of the draft (7-day free trial available), and then make sure to cancel once the event ends. If you find you want to watch NFL throughout the season, you may want to stay subscribed, or just suspend your account until August once the pre-season begins.

2. If you’re in the US, sign up for a VPN service and then use NFL Game Pass. Because broadcast rights to the 2021 NFL Draft in the US are split between several other broadcasters, including ABC, ESPN, and the NFL Network, US fans can’t normally use NFL Game Pass to watch the Draft. To get all of those channels, you’d need to sign up for a higher-costing multi-channel service, such as Sling TV, fuboTV, or YouTube TV.

US fans can get the same high-level coverage that international fans enjoy by signing up to NFL Game Pass and then connecting to the service using a VPN.

Here’s how to watch the NFL Draft free on NFL Game Pass in the US:

You’re now ready to stream the NFL Draft! Note that you can also maintain this VPN+Game Pass setup for the pre-season and regular season of the 2021-2022 NFL season. Doing so will allow give you much cheaper access to live NFL games compared to the alternatives.

As noted above, NFL Game Pass is now the best option for worldwide to live stream the 2021 NFL Draft. That said, not everyone is going to want to use NFL Game Pass. Here are some alternatives for this year’s Draft.

How to watch the NFL Draft in the US

The NFL Draft will be broadcast through all of the following networks:

If you’re in the US and have a digital over-the-air antenna, you can pick up your local ABC broadcast and watch for free. Alternatively, you could use Locast if you live in one of the cities where Locast is available. (Note: Locast often doesn’t work with VPNs and unless you pay the $5 donation, Locast will display a ton of ads that might ruin the viewing experience).

Alternatively, you’ll need to sign up for one of the following services to get access to ABC, ESPN, ESPN Deportes, or the NFL Network. Each option below has a free trial period, so you may be able to sign up for free, watch the 2021 NFL Draft, and then cancel your subscription afterward.

Sling TV is the cheapest option to watch the NFL draft if you want to use NFL Game Pass and a VPN. You can subscribe to Sling TV with a 3-day free trial, so you’ll need to time it right and sign up right before the Round 1 of the Draft.

Should you choose to keep Sling TV after the draft for the regular NFL season, each individual package costs $35 per month.

Sling TV does not offer ABC in any of its streaming packages.

Offering a 7-day free trial with over 85 channels available, YouTube TV is a good option for NFL fans in the US. YouTube TV provides ESPN, NFL Network, and ABC (most markets).

If you decide to stick with YouTube TV, it now costs $64.99 per month.

An interesting TV option, Hulu + Live TV combines Hulu’s on-demand library with a package of live channels similar to what’s available on YouTube TV. The service carries ABC (in most markets) and ESPN. There’s no NFL Network coverage available, however.

The lesser-known service Vidgo provides offers up to 95 channels, including every channel you need to watch the NFL Draft this year. ABC, ESPN, ESPN Deportes, and NFL Network are all available through its single channel package. Unfortunately, this service does not have a free trial. Instead, it provides a heavy discount on the first month of service.

After undergoing major changes in 2021, the service that was previously known as DirecTV Now, and then AT&T TV Now, is officially just AT&T TV. Its live TV streaming packages offer ABC and ESPN coverage, but no NFL Network.

The NFL Draft is a three-day event covering with 7 rounds. The event schedule is as follows:

How does the NFL Draft work?

The NFL Draft is the primary event for NFL teams to draft new young players. However, a fair amount of player trading occurs, which teams can do in order to increase their draft pick order, or increase their number of draft picks.

This year, there are 259 picks across all 32 teams in the NFL.  Every team will be exercising picks, although the pick order has been slightly altered due to trades that occurred during and after the 2019-2020 NFL season.

The first-round pick order this year is as follows:

With only 261 picks to go around, not every prospect will make the cut. However, here are some of the top 2021 NFL Draft prospects to watch, many of whom may be grabbed up in the first round.

Check The Draft Network for a longer list of 2021 NFL Draft prospects.