How to watch Match TV online from anywhere (with a VPN)

If you’re traveling outside of Russia, you won’t normally be able to watch Match TV online. Below, we’ll cover the best VPNs for Match TV so you can live stream sports while abroad.
Ian Garland Streaming, Kodi and VPN Expert 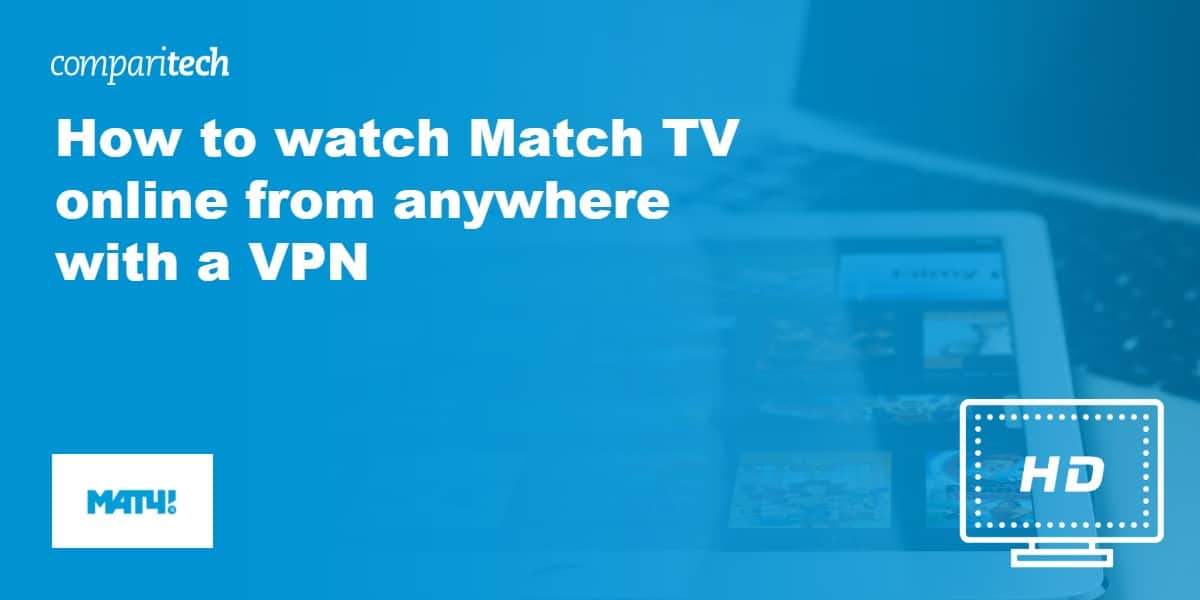 Like most major streaming platforms, Match TV is geographically restricted. If you try to play anything on Match TV when traveling abroad in a country outside Russia, you’ll simply see the following error: “bидeo нeдocтyпho для пpоcmoтpa иэ Baшeй cтpaны”. Loosely translated, this says, “Video is unsuitable for viewing in your country.”

This error appears because Match TV has checked your IP address and determined that you’re not in a supported region. To prevent this and watch Match TV from anywhere, you can simply connect to a Russian VPN server back home. Another benefit of this is that your data will be encrypted and unreadable by hackers, your employer, or the government. Naturally, if you’re in a country with widespread online surveillance (like Russia), the privacy VPNs offer can be extremely appealing.

How to watch Match TV from anywhere using a VPN

Match TV is region-locked, but the main issue isn’t that its protections are hard to bypass. Rather, only a handful of reputable providers have Russian servers. Still, once you find one, unblocking Match TV should only take a second. Below is a step-by-step guide.

Here’s how to watch Match TV from anywhere:

Surfshark is offering a fully-featured risk-free 30-day trial if you sign up at this page. You can use the VPN rated #1 for Match TV, free from any restrictions, for a month—great if you want to stream your favorite team’s matches while you travel abroad on vacation.

There are no hidden terms—just contact support within 30 days if you decide Surfshark isn't right for you and you'll get a full refund. Start your Surfshark trial here.

Jargon and technical specifications are some of the first things any newcomer sees when they visit a VPN website. If you’re not familiar with computer networking, this means that you’ve already hit a roadblock. However, deciding which VPN to use doesn’t need to be difficult. Rather than trying to find one service that’s the best at everything, it’s usually better to opt for a VPN that does everything reasonably well. That’s why, when making our decisions, we decided to only recommend providers that offer all of the following:

If you’re in a rush, just take a look below for a brief guide to the best VPNs for Match TV. See any you like? In that case, scroll down for a more detailed review.

The best VPNs for Match TV

Below, we’ll examine each of our recommended VPNs a little more closely:

Surfshark is our top choice for anyone hoping to stream Match TV abroad. To begin with, it’s blazing fast, with an average speed of 207 Mbps. Further, there are very few streaming services it can’t unblock; this VPN even works with Netflix and Amazon Prime Video. This is one of the few major providers to allow an unlimited number of simultaneous connections. In other words, it’s a particularly high-value option for families (or those who simply have lots of devices).

Straight away, you can tell that this service values your privacy. In addition to its 256-bit encryption (which is currently considered uncrackable), kill switch, and leak protection, it offers a host of more advanced security tools. These include a NoBorders mode for bypassing online censorship and a feature that blocks ads, malware, and trackers automatically. Just as important, Surfshark refuses to keep any logs at all. Support staff is on-hand 24/7 (over email or live chat) to assist with any issues you might have.

BEST VPN FOR MATCH TV:Surfshark is our go-to option for Match TV. Its speeds are unmatched, its security features are some of the strongest available, and it allows you to protect as many devices as you like. It also boasts a risk-free 30-day money-back guarantee.

Interested? Why not check out our full Surfshark review?

CyberGhost is our first pick for anyone on a budget. Not only is this service affordable, but it’s also extremely easy to use. With 60 fast and reliable Russian servers (and over 7,000 elsewhere in the world), it makes watching Match TV abroad very simple and straightforward. There are even specific servers designed for unblocking larger platforms like Disney+ and HBO. Up to seven devices can be connected at any one time.

All of this VPN’s security features come pre-configured. These include a kill switch, DNS and IPv6 leak protection, 256-bit encryption, and an automatic ad-blocker. CyberGhost isn’t content to stop there, though: it also recently added WireGuard support and released its own password manager, plus a security checkup tool for Windows PCs. CyberGhost doesn’t log any data that could be used to identify you. 24/7 live chat is available to help with any problems.

CyberGhost has apps for MacOS, Linux, Windows, Android, and iOS devices. If you’d prefer, you can manually configure it for supported routers, thereby securing an entire network at once.

Check out our in-depth review of CyberGhost.

PrivateVPN has expanded its network lately and now has around 200 servers in 63 countries including Russia. It’s a particularly strong choice for watching TV, thanks to its very high speeds (averaging 71 Mbps) and incredible unblocking abilities. In fact, as well as Match TV, this VPN works with services like Netflix, BBC iPlayer, and DAZN. Better still, users can secure up to six of their devices simultaneously.

This service goes above and beyond where your privacy is concerned. Its apps offer 256-bit encryption, protection against DNS and IPv6 leaks, a customizable kill switch, and a stealth mode that can help you bypass country-wide internet blocking. Further, PrivateVPN follows a no-logs policy and recently became its own hosting provider, ensuring no other company ever has access to your traffic. Support staff can be reached at almost any hour over live chat.

PrivateVPN users can install apps for Windows, Android, Linux, MacOS, and iOS. Select routers are supported too, although these must be configured manually.

IMPRESSIVE SECURITY:PrivateVPN, as you might have guessed, values user privacy very highly. With a no-logs policy, some of the strongest protections around, and the ability to unblock Match TV from anywhere, it’s a highly-versatile VPN. Also has a 30-day money-back guarantee.

For more info, take a look at the complete PrivateVPN review.

Hotspot Shield users can choose from 1,800 servers in over 80 countries, making this provider a great choice for live streaming TV abroad. There are specific servers designed to help you access platforms like Netflix US, but even the regular ones boast impressive unblocking ability. For instance, the standard Russian servers work perfectly with Match TV. A maximum of five devices can be connected at once.

This provider uses 256-bit encryption, a kill switch, and protection against DNS and IPv6 leaks to help hide your activities from snoopers. That’s not all: the most recent versions of the apps include support for the IKEv2 protocol (instead of just the proprietary Hydra protocol) and a feature that connects automatically whenever you use an unsecured network. Hotspot Shield doesn’t store any personally identifiable info. Support staff can be reached day or night via email and live chat.

Hotspot Shield provides its own Android, iOS, Linux, MacOS, and Windows apps. A good range of wireless routers are supported too, though you’ll have to install the VPN manually.

GREAT FOR LIVE STREAMING:Hotspot Shield has plenty to offer, including specific servers for unblocking popular streaming services and a great set of security tools. There’s also 24/7 support, a no-logging policy, and a 45-day money-back guarantee.

VyprVPN has around 700 servers in 70+ locations including Moscow. It’s also capable of unblocking a huge range of streaming platforms, from Netflix to Match TV and everything in between. This VPN’s speeds aren’t the fastest we’ve seen, but they’re still enough for lag-free streaming. With up to 30 simultaneous connections permitted, you’ll be able to protect every device you own with a single account.

Thanks to this service’s 256-bit encryption, kill switch, and protection against IPv6 and DNS leaks, it’s easy to stay safe online. What’s more, this VPN can connect automatically if you use a public wifi hotspot. WireGuard support arrived in a recent update. Finally, VyprVPN doesn’t keep any logs at all. 24/7 live chat is available in the unlikely event you have any issues.

VyprVPN apps are available for Linux, MacOS, Windows, iOS, and Android. If you’d like to protect an unlimited number of devices, you can also manually install the VPN on select routers.

VALUES PRIVACY:VyprVPN is a strong all-rounder, but security is where it really shines. Follows a strict zero-logs policy and ensures you can stream, torrent, or browse safely, wherever you are. Additionally, users can take advantage of a 30-day money-back guarantee.

Check out our comprehensive VyprVPN review.

Methodology: How we found the best VPNs for Match TV

Finding a VPN capable of unblocking a specific streaming platform can be difficult in and of itself. However, when the platform requires you to use Russian servers, there are additional privacy aspects to consider. We evaluated all of our selections on the following criteria to ensure we only recommend VPNs that are both safe and suitable for streaming Match TV abroad:

The steps above are just the beginning of our more extensive VPN testing methodology.

Many people are understandably confused by Russia’s VPN law, especially with all of the coverage given to the “VPN ban” that came into effect in 2017. However, VPNs remain legal to use, provided you don’t use them to circumvent the country’s online restrictions. While the government is allowed to force VPNs to provide access to their servers, any provider worth its salt will have a no-logs policy, ensuring no identifiable data is revealed.

Data privacy legislation is extremely complex and differs from one country to another. If there’s any doubt in your mind about whether VPNs are legal in your location, we strongly advise you to consult your region’s laws before attempting to use one.

Can I watch Match TV with a free VPN?

The chances of being able to watch Match TV with a free VPN are vanishingly small. First of all, you’ll have to find one that offers Russian servers, which is no small task given that the majority tend to favor high-traffic locations like the US. The next challenge is getting a service that’s fast enough for live streaming that hasn’t already been blacklisted by every major streaming service.

There are significant security risks to consider too. Paid VPNs are extensively tested and continuously audited to ensure that they’re as secure as they claim. There are no such guarantees from free services. In fact, one survey found that 18% used no encryption at all, which would leave you wide open to Russian online surveillance. We strongly advise you to consider a provider’s security and privacy credentials rather than making a decision on price alone.

What can I watch on Match TV?

Match TV covers a broad range of different sports, so there’s something for almost everyone. Here’s a quick rundown of some of the platform’s biggest offerings: