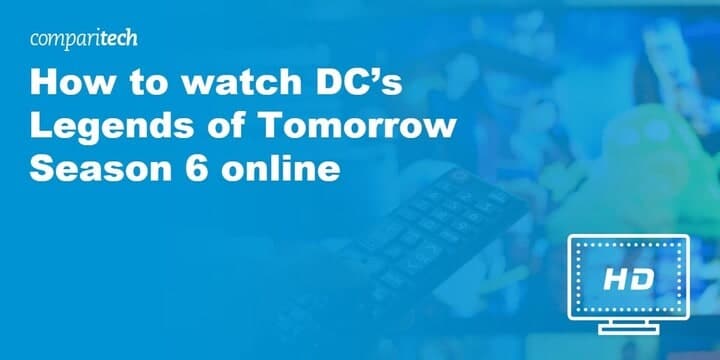 The seventh season of DC’s Legends of Tomorrow will begin on Wednesday, October 13 at 8 PM EST/PST. In total, there’ll be 13 episodes, with one released each week, meaning we can expect this season to end sometime in early 2021. However, as it is only shown on region-locked services you’ll need a VPN to watch while traveling abroad. Read on to find out how to live stream Legends of Tomorrow season 7 online from anywhere (even abroad).

You should note that Legends of Tomorrow will only be broadcast on region-locked streaming services. This means that if you’re traveling abroad and there’s no official broadcaster in your country, you’ll need a VPN (Virtual Private Network) to connect to your streaming services back home.

Streaming services are often only available in specific countries, and won’t let you watch from abroad. However, by changing your IP address using a VPN, you can easily spoof your location and watch Legends of Tomorrow online, even while abroad.

Here’s how to watch DC Legends of Tomorrow online from anywhere:

To make sure you don’t have to wait to see new episodes, we recommend trying out this method on other shows or early episodes before the new ones are posted. This way, you can change servers or contact your VPN’s customer service ahead of time if something goes wrong.

NordVPN is offering a fully-featured risk-free 30-day trial if you sign up at this page. You can use the VPN rated #1 for The CW with no restrictions for a month—great if you want to stream your favorite shows while traveling.

How to watch Legends of Tomorrow for free on US TV

Legends of Tomorrow airs on The CW, a free, over-the-air broadcast network in the U.S. Every new episode that airs on The CW is also posted to their official website, CWTV.com, a few hours after it airs. If you are located in the US, this means you can watch new episodes of Legends of Tomorrow for free by simply opening a browser, navigating to the site, and clicking on the latest episode.

Another option is to sign up for a “skinny bundle” online TV service. This will allow you to watch the show live in high-definition. Here is a list of a few “skinny bundles” that include The CW:

Seasons 1-5 of Legends of Tomorrow are available on Netflix US (plans start from $8.99 USD) and it’s therefore likely that season 6 and, eventually season 7, will be added in the near future.

Remember, all of the above services are region-locked. As such, you’ll need a VPN to watch if you’re abroad. NordVPN offers a 30-day money-back guarantee, allowing you to watch risk-free and claim a full refund if you’re unsatisfied.

Where else can I watch Legends of Tomorrow online?

Legends of Tomorrow will also be live-streamed in HD on CTV Sci-fi at the same time it is broadcast in the U.S. Unfortunately, though, you’ll have to sign in with your cable provider details to watch. On the plus side, if you miss an episode, you can stream it a few hours later on-demand.

Not quite caught up? All six earlier seasons are included with Crave. This service costs $9.99 CAD per month, following a seven-day trial. CTV is geo-blocked, so you’ll have to either be in Canada or using a Canadian VPN server to access it.

At the moment, there’s no official release date of Legends of Tomorrow season 7 in the UK. Previous seasons have aired on Sky One and Now TV shortly after their US release, and all six older seasons are currently available on these services. Sky Go and Now TV are region-locked, so you’ll need a VPN to use them abroad.

If you are located in Australia, you can catch the Legends of Tomorrow season 7 premiere on Thursday, October 14 at 5 PM AEDT on Binge. This service costs from $10 AUD per month and includes a two-week free trial. Better still, it currently has all six seasons, making it a great way to get caught up. Foxtel services are only available in Australia, so if you’re abroad, you’ll need a VPN.

Can I stream Legends of Tomorrow with a free VPN?

We do not recommend using a free VPN. While some free VPNs may allow you to get around geographic content blocks temporarily, they often will not work well enough for buffer-free HD streaming. Some will even buffer with SD streams.

Free VPNs often have thousands of users trying to connect to outdated infrastructure. This leads to server outages and dropped signals. Additionally, most free VPNs will limit your data usage. The data limit is often far below what you’d need to stream either SD or HD video.

In addition, they often keep logs of users’ activities, leading to invasions of privacy that VPNs are supposed to eliminate. To protect your privacy, we recommend using a VPN with a record of protecting users’ privacy.

For a detailed list of VPNs that are great for streaming video, check out our guide to VPNs.

What is DC’s Legends of Tomorrow?

Legends of Tomorrow is a superhero television series developed by Marc Guggenheim, Phil Klemmer, Andrew Kreisberg, and Greg Berlanti. The show is based on characters from DC comics and takes place in the “Arrowverse,” a shared fictional universe that incorporates characters from The CW shows Arrow, The Flash, Vixen, Supergirl, and others.

It stars Arthur Darvill (Doctor Who’s “Rory Williams”) as Rip Hunter, a time-traveling adventurer and leader of the group of heroes; Caity Lotz (MTV’s Death Valley) as an assassin and vigilante; Wentworth Miller and Dominic Purcell (from Prison Break fame) as two thieves who have no superpowers; and Brandon Routh (the star of 2006’s Superman) as a scientist/engineer who created a mechanical suit that allows him to change size.

The plot of the show revolves around the threat of an evil immortal being named Vandal Savage, who intends to destroy the world. The heroes travel through time, visiting Ancient Egypt, the Soviet Union, the U.S. in the 1970’s, and other exotic places and times while chasing and fighting this evil being.

In addition to the time-travel aspect of the show, many viewers enjoy the witty dialogue and fast-paced action in DC’s Legends of Tomorrow.