How to watch Arrow Season 8 online abroad (outside the US)

Want to watch Arrow season 8 live online for free? Below, we'll explain how to live stream Arrow from abroad (outside of the US) using a Virtual Private Network (VPN).
Tom Blackstone 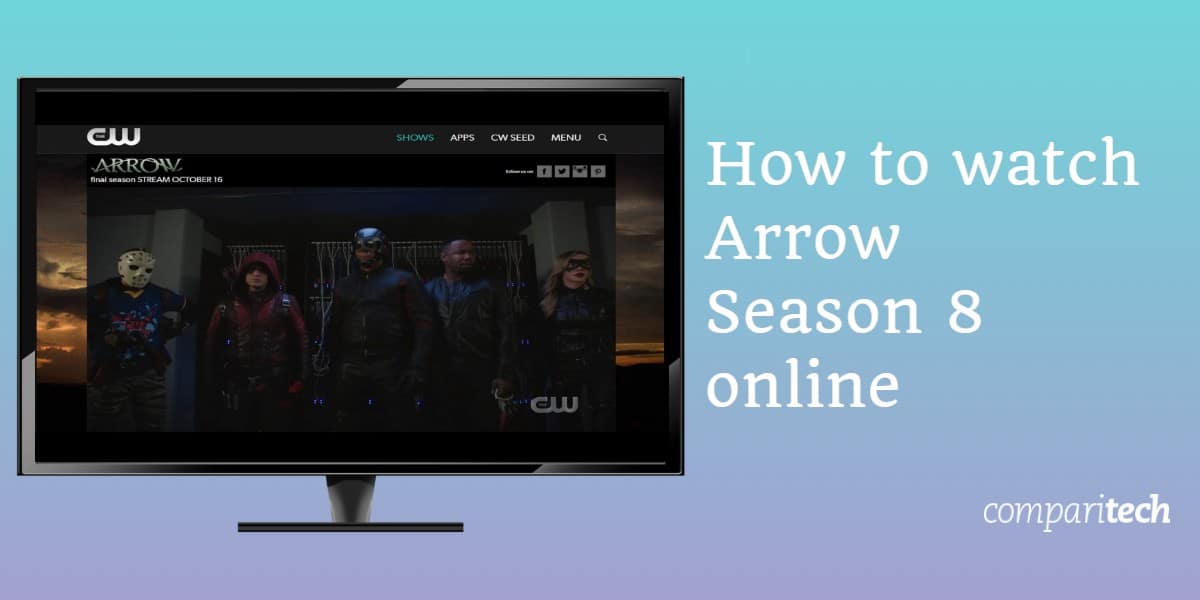 Arrow season 8 is set to premiere at 9 PM EST (6 PM PST) on October 15. It’s worth noting that this series will be significantly shorter than in previous years, with just ten episodes. Take a look below to find out how to watch Arrow season 8 online from anywhere.

It’s important to note that we’ll only be recommending official sources for Arrow season 8. Although third-party streams will likely be available, these are often laggy and only available at very low-resolutions. Further, unauthorized streams can be taken offline at any moment for copyright infringement. You can watch Arrow for free online anyway, though, so there’s no advantage to using unlicensed streams.

Arrow‘s final season will only be shown on region-locked streaming services. As such, you’ll need a VPN to watch it from abroad.

How to watch Arrow season 8 online from anywhere

How to stream Arrow season 8 for free on US TV

If you are located in the US, watching Arrow season 8 online is fairly simple as it’s broadcast on The CW. While this service doesn’t have an online live stream, it does allow you to watch on-demand, free-of-charge. Better still, you don’t even have to create an account. New episodes are usually added the day after they air and remain available for at least a week (longer in some cases).

If you’d prefer to watch Arrow live, you’ll have to sign up for YouTube TV, fuboTV, or Hulu with Live TV. All of these services include a free trial but unfortunately, none is long enough to stream the whole season. We’d recommend using Hulu, just because it’s slightly less expensive, at $44.99 USD per month.

Additionally, if you want to watch older episodes of Arrow (Seasons 1-7), you may want to get a Netflix subscription. Currently, Netflix US has every episode from the previous seasons.

All of the above services are region-locked, meaning you’ll need a VPN to watch Arrow on them from abroad. ExpressVPN comes with a 30-day money-back guarantee, allowing you to stream Arrow risk-free and claim a refund if unsatisfied.

Where else can I watch Arrow online?

Arrow is a hugely popular show, and understandably, it has broadcasters in several different countries. Take a look below to find out who’s showing Arrow season 8 where you are:

British fans have a little longer to wait as Arrow season 8 won’t arrive in the UK until October 30. It’ll premiere at 8 PM BST on Sky One. If you’re already a Sky TV customer, you can stream it online using the Sky Go app.

Don’t have cable? You can also stream Sky One live online using Now TV. This costs £8.99 per month and comes with a one-week free trial. Currently, Now TV’s on-demand library also includes seasons 6 and 7, so it’s perfect if you’ve got some catching up to do. Seasons 1-5 are free-to-watch on Amazon Prime Video.

These streaming services are all geo-blocked. You can access them from abroad using a VPN, though.

Australian fans can stream new episodes of Arrow every Tuesday at 9:30 PM AEST on FOX8. Existing Foxtel TV subscribers can simply sign into the Foxtel Go app and watch online at no added cost.

If you don’t have cable or are with a different provider, you can register for Foxtel Now instead. This service costs $25 AUD and includes a ten-day free trial during which you can watch any channel you like.

Foxtel services are only available in Australia. Despite this, you can use a VPN to access them abroad.

In Canada, Arrow will be shown exclusively on CTV Sci-Fi. New episodes will air weekly, starting October 19 at 10 PM EST. If your cable subscription already includes CTV, you can log in and start streaming immediately at no extra cost. Unfortunately, there’s no way to watch this channel online unless you have cable TV.

CTV Sci-Fi is region-locked and only available in Canada. As such, you’ll need a VPN to access it abroad.

What can we expect from Arrow season 8?

Details surrounding Arrow‘s plot are few and far between but we do know that five of the final season’s episode will be devoted to setting up the “Crisis on Infinite Earths” storyline. This pivotal arc will see the DC multiverse collide, with characters from The Flash, Arrow, Supergirl, Batwoman, Smallville, and Legends of Tomorrow crossing over.