TV Now is only available in Germany. Fortunately, there’s a solution! With a VPN, you can watch TV Now abroad. We’ll even show you the best VPNs to watch TV Now outside Germany.
Mark Gill TECH JOURNALIST, VPN AND PRIVACY SPECIALIST 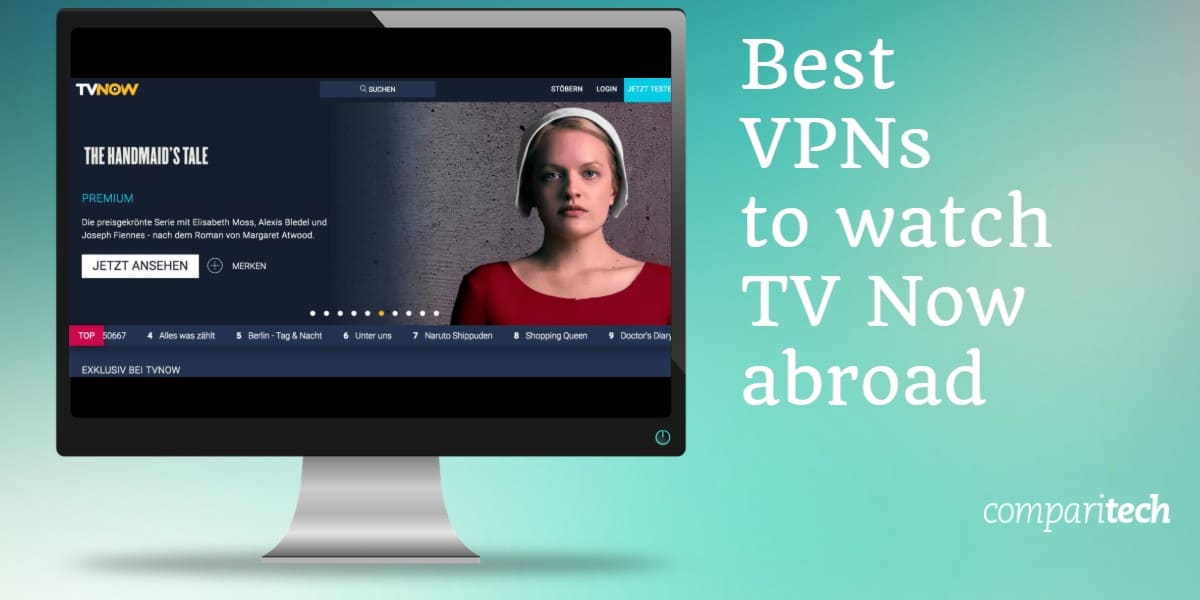 In order to access TV Now abroad (outside of Germany), you’ll need a VPN. Short for “Virtual Private Network”, a VPN routes your internet traffic through an encrypted tunnel, shielding it from your ISP and snoopers, providing you with greater online privacy as a result. The best VPNs have servers in many countries, including Germany. By connecting to a server in Germany, you’ll be able to obtain a German IP address and unblock TV Now abroad in Austria, Switzerland, USA or anywhere else in the world.

Short of time? Don’t worry! Here’s a quick summary of the best VPNs for TV Now:

While many VPN services have servers in Germany, some are best avoided. That’s because VPNs can vary in all sorts of areas including speed and security. To save you some time, we’ve narrowed down the options to 5 VPNs all meeting the following criteria:

Here’s our list of the best VPNs to watch TV Now outside Germany:

ExpressVPN offers some of the fastest and most reliable servers for watching TV Now outside Germany. Overall, this popular VPN service has over 3,000 servers in 94 countries, a number of which are spread across 3 German cities. Streaming TV Now with ExpressVPN is seamless with no buffering or lag. Better still, ExpressVPN also performs well with notoriously hard-to-unblock sites such as Netflix and Amazon Prime Video.

This service offers a wide range of user-friendly apps and browser extensions, meaning you can use ExpressVPN on whichever device you prefer. Connecting to a fast server in Germany only takes a few seconds though 24/7 live chat support is available if you have any issues. It’s also worth knowing that ExpressVPN allows you to connect up to 5 of your devices simultaneously.

Aside from providing excellent performance, this British Virgin Islands-based VPN service offers a high level of security. Your data is secured through the use of 256-bit AES encryption. Further security features include DNS and IPv6 leak protection, a kill switch, and split tunneling which lets you choose which of your traffic is and isn’t routed through the VPN. Last but not least, ExpressVPN doesn’t keep any of your connection or activity logs.

ExpressVPN apps are available for the following: Windows, Android, Mac, iOS, Linux, and routers. Browser extensions are offered for Chrome and Firefox.

BEST VPN FOR NOW TV:ExpressVPN unblocks most geo-restricted content including TV Now, Netflix, and BBC iPlayer. It offers fast and consistent connections, 24/7 live chat support, and a high level of encryption. You can try it risk-free as it includes a 30-day money-back guarantee.

NordVPN has almost 250 servers in Germany (in both Berlin and Frankfurt) and over 5,000 worldwide. This service even offers specialty servers which allow you to safely use P2P networks, get a dedicated IP address, or use the internet in countries with strict online censorship. As well as unblocking TV Now, NordVPN unblocks a wide range of region-locked content including Netflix, BBC iPlayer, and Amazon Prime Video. The speeds offered make for smooth streaming of content, even in 1080p HD.

There are several features that make NordVPN a strong choice. For starters, you can have up to 6 simultaneous connections. The apps and browser extensions on offer are easy for beginners to use, plus there’s also 24/7 customer support via live chat. Its security features are equally impressive: there’s 256-bit AES encryption, DNS, IPv6, and WebRTC leak protection, and a kill switch. Furthermore, NordVPN is headquartered in Panama where there are no mandatory data retention laws.

You can use NordVPN via the apps for desktop (Windows, Mac, and Linux) and mobile (Android and iOS). There’s also an app for Android TV as well as Chrome and Firefox browser extensions. Manual setup is required for compatible routers.

BEST FOR THE BUDGET:NordVPN has almost 250 servers in Germany for unblocking TV Now. Allows up to 6 simultaneous connections. Easy-to-use apps and browser extensions and secures your data with encryption and no-logs policy. 30-day money-back guarantee.

CyberGhost has more Germany-based servers than most VPNs on the market today. Indeed, it has over 600 servers in Germany across the cities of Berlin, Dusseldorf, and Frankfurt. Connections are fast and reliable, allowing for consistent high-quality streaming with platforms like TV Now, Netflix US or the BBC iPlayer. CyberGhost is a good option for families, particularly considering that it lets you connect up to 7 devices simultaneously.

While connecting to a server is quick and easy with CyberGhost, you also have the option of choosing a specific server and seeing how many users are currently on each. Should you have any problems, 24/7 live chat and email support is available. CyberGhost improves your online security with its 256-bit AES encryption, ad-blocker, malware-scanner, DNS and IPv6 leak protection, and automatic kill switch. This Romania-based VPN service operates a strict no-logs policy, serving to protect your privacy.

600+ SERVERS IN GERMANY:CyberGhost easily unblocks TV Now thanks to having over 600 servers in Germany. It offers good speeds for streaming and lets you have up to 7 simultaneous connections. Has a strict no-logs policy. 45-day money-back guarantee.

IPVanish allows the whole family to unblock TV Now. Offering up to 10 simultaneous connections per account, it’s another excellent value VPN. You can take advantage of the fast speeds offered by IPVanish by streaming the likes of TV Now and even Netflix US. This US-headquartered VPN service has dozens of servers in Germany and around 1,300 in 60+ countries. It states that it offers unlimited bandwidth and doesn’t throttle your network connection, allowing for seamless browsing and streaming.

The user-friendly apps for desktop and mobile make IPVanish accessible for beginners. While you can search for a specific server by city and latency, there’s also the quick and easy option of connecting to the best available server. IPVanish includes 24/7 live chat customer support should you have any questions. 256-bit AES encryption, a kill switch, and DNS leak protection all serve to protect your privacy, as does this VPN’s strict zero-logs policy.

10 SIMULTANEOUS CONNECTIONS:IPVanish unblocks TV Now and is great for families as it allows up to 10 simultaneous connections. Offers good speeds for browsing and streaming and includes 24/7 support. No-logs policy. 7-day money-back guarantee.

PrivateVPN is a smaller VPN service with fast speeds for browsing and streaming. It can unblock most geo-restricted content you’re likely to find including TV Now, Netflix, and BBC iPlayer. Apart from servers in Frankfurt and Nuremberg, Germany, PrivateVPN has servers in 59 other countries making it ideal for accessing restricted content worldwide. You can use this Swedish VPN to connect up to 6 devices simultaneously, all to unique IP addresses.

This VPN caters to both novice and experienced users; its desktop and mobile apps feature simple and advanced settings menus. When you use the live chat support, you’ll speak directly to PrivateVPN’s developers which means they should be able to help with almost any issue. If you’re looking for a VPN that secures your data, PrivateVPN is worth considering. It offers 256-bit AES encryption, IPv6 and DNS leak protection, a kill switch, and no-logs policy.

PrivateVPN apps are available for Windows, Mac, iOS, and Android operating systems. Manual installation is required in the case of Linux and routers.

How to watch TV Now abroad with a VPN

If you want to be able to watch TV Now outside Germany, all you need to do is the following:

The above steps should work in most cases. If you’re still having problems unblocking TV Now abroad, make sure you try numerous servers (it may be that certain IP addresses are blocked). Alternatively, contact the customer support of your VPN.

Can I use a free VPN to watch TV Now abroad?

Yes, some free VPNs will successfully unblock TV Now. Unfortunately, the performance of free VPNs leaves much to be desired. Often with very few servers and an overwhelming number of users, the result is stuttering streaming. Some free VPNs even struggle to unblock region locked content such as Netflix, DAZN and HBO Go.

What’s more, free VPNs are a risky choice, particularly because many log the activity of users, selling this information to third parties. Some free VPNs may even bombard you with inappropriate and irrelevant adverts. After all, free VPNs have to make money somehow. Few free VPNs use a high level of encryption to secure your data or have a kill switch feature to prevent data leaks. All in all, free VPNs simply aren’t worth the risk.

What can I watch on TV Now?

TV Now is a video-on-demand (VOD) platform from German broadcaster RTL. Through TV Now, you can watch the following RTL channels live:

Aside from live TV, TV Now offers a wide range of German and international TV series and movies on-demand. Here are some examples of what you can find: