Interested in streaming Viafree.no while traveling outside Norway? In this article, we’ll explain how to watch Viafree.no with a VPN and the best ones for this purpose.
Osman Husain Tech journalist, VPN and streaming expert 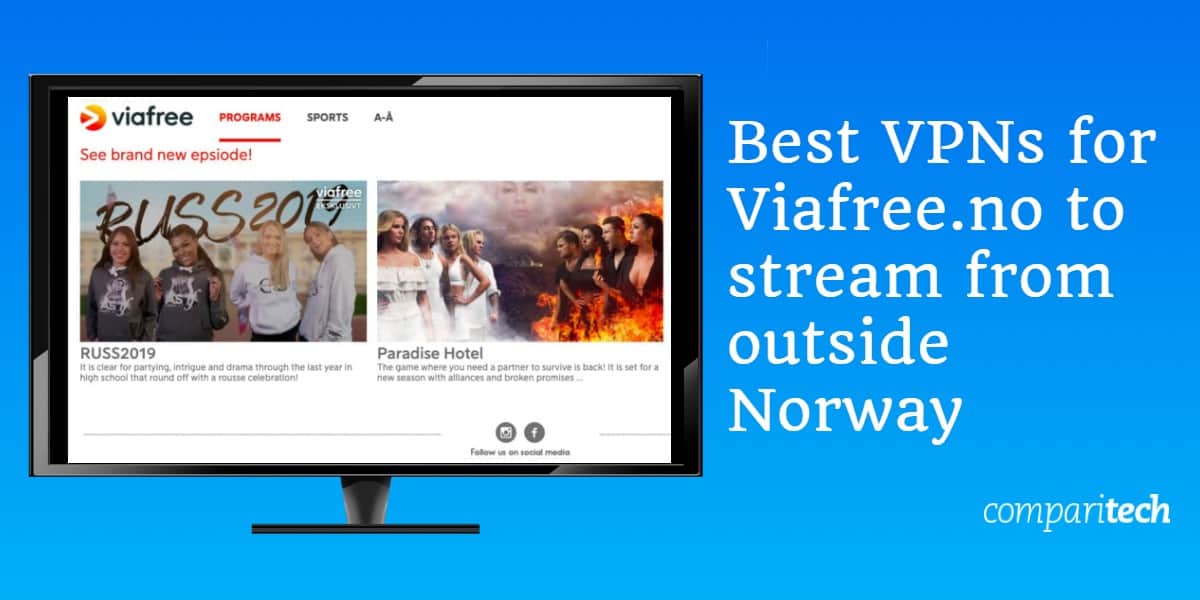 The Norwegian on-demand online television channel is only available for those streamers that possess a Norwegian IP address. Try to access the service without it and you’ll be welcomed with the following message:

“Video not available in country.”

What should you do to circumvent this restriction? Use a Virtual Private Network (VPN) — software that hides your actual IP address and transports you to almost any location in the world. Through the encrypted tunnel that your VPN provider sets up, you can reliably obtain a Norwegian IP address with a stable internet connection.

By connecting to a VPN server in Norway, you will be assigned a local IP address. Streaming websites such as Viafree.no and others like BBC iPlayer will see the address and assume you’re physically in the Scandinavian country.

If you don’t want to read the rest of the article, here’s our quick summary of the best VPNs to access Viafree.no:

While VPNs are prevalent all across the internet, don’t make the mistake of placing them all in the same basket. Our recommendation of the top 5 VPNs to stream Viafree.no hinges on the following factors:

Criteria for selecting the best VPNs to watch Viafree.no

ExpressVPN is our top choice to stream Viafree.no from anywhere. The provider has over 3,000 servers in 94 countries — Norway is included in the list. We tested three Norwegian locations and all of them handled Viafree.no without any problems.

ExpressVPN is able to help you to access many more streaming services including Netflix US, UK, and Canada, Amazon Prime Video, and more. Speeds are excellent — HD streaming is a breeze.

Customer support is available round the clock via online mediums. A single account allows access to three connections at a time. Apps are available for Windows, MacOS, Linux, Android, and iOS.

BEST VPN FOR VIAFREE.NO:ExpressVPN is our top pick. It guarantees you a fast, stable connection to stream Viafree.no from anywhere in the world. Try it risk-free with a 30-day money-back guarantee.

NordVPN hosts a gigantic server network which 5,000 locations across 60 countries. Norway hosts 64 servers so you’re pretty much guaranteed a Norwegian IP address whenever you click connect.

Apps for Windows, MacOS, Linux, Android, and iOS are available. One paid account allows for six devices to connect simultaneously, and there’s 24/7 live chat support if anything goes amiss.

BEST BUDGET OFFER:NordVPN comes with all the bells and whistles of a modern-day VPN at a price that’s extremely affordable. Try it with a 30-day money-back guarantee.

CyberGhost has 30 servers in Norway and offers over 3,700 more across the world with locations in a further 58 countries. CyberGhost is known for its blazing fast speeds, strong encryption, and intuitive design. It’ll do the job of unblocking Viafree.no easily.

It’s able to unblock services like Netflix, Hulu, and Amazon Prime Video. You can expect unlimited bandwidth and use of the 256-bit AES encryption protocol. Further security features include DNS leak protection, an internet kill switch, anti-malware defense, and an ad-blocker.

You’ll find apps for Windows, MacOS, Android, and iOS. A single account allows for seven simultaneous connections so you’re able to share with friends and family. Customer support is available 24/7.

CONSISTENT ALL-ROUNDER:CyberGhost has an extremely simple interface making it ideal for beginner users. Plenty of servers in Norway make it an easy task to stream Viafree.no. Try it with a 45-day money-back guarantee.

Surfshark’s recently emerged as a serious contender in the VPN industry due to its low cost, excellent unblocking capabilities, and premium speeds.

It currently has over 800 servers in 50 countries, with Norway included in the list. This provider offers unlimited data streaming, no bandwidth restrictions, as well as a robust ‘no-logs’ policy so you’ll be safe and secure on the web. What’s more, Surfshark allows an unlimited number of devices to connect with one plan.

Apps are available for MacOS, Windows, iOS, and Android.

GETS THE JOB DONE:Surfshark will meet all your streaming needs. Try it with a 30-day money-back guarantee.

IPVanish is headquartered in the US, but it’s an extremely secure and privacy-focused provider. What’s more, it allows 10 simultaneous connections with one account, making it cost-effective.

Norway has two servers in a global network of about 1,300. IPVanish sticks to a no-logs policy — similar to NordVPN — meaning there’s no user data stored. Plus, it owns and manages all its servers, putting it in control of said traffic and data.

256-bit AES encryption ships with all packages as well as protection from DNS leaks. Unstable VPN connections are safely dealt with by an internet kill switch. Plus, IPVanish can unlock several popular streaming services including Netflix US.

HARDY:IPVanish checks all the boxes  and streaming Viafree.no will be done hassle-free.Try it with a 7-day money-back guarantee.

PrivateVPN, based in fellow Scandinavian country, is an excellent choice for streaming. While it doesn’t have a massive server network, it’ll still do its job well with a focus on smaller, quality server connections.

The global server list includes about 150 options in 60 locations with one server in Norway. All servers are optimized for HD streaming and privacy — other than Viafree.no, PrivateVPN can also help you access Netflix US, Amazon Prime Video, BBC iPlayer, and more.

The service is easy to set up and will be a breeze for newcomers. Security features include 256-bit AES encryption, protection against DNS and IPv6 leaks, an internet kill switch, and more. It doesn’t store any user logs on its servers.

Apps are available for all the major streaming platforms — Android, Windows, iOS, and MacOS. Customer support isn’t 24/7 but it incorporates remote assistance to get the job done. A single account allows six devices to connect simultaneously.

UP AND COMER:PrivateVPN is a reliable performer with many geo-restricted media services. Try it with a 30-day money-back guarantee.

Should I use a free VPN to stream Viafree.no?

Free VPNs are undoubtedly a tempting recourse because of the lack of any upfront payment needed. But they’re usually a ruse to get you to upgrade to a paid plan or a racket designed to siphon money off you somehow.

Free providers lack several of the main features paid services do. For example:

Free VPNs usually have a handful of servers to choose from. That’s in stark contrast to paid providers that offer hundreds from around the world and unlimited server switching at will.

Free VPNs take on far more users than what their servers can support, resulting in network congestion and wait times to connect to a server. Plus, they don’t usually offer unlimited bandwidth for HD video streaming.

To make things worse, you’re putting yourself at serious risk of data theft or a malware attack by using a free VPN. Some unscrupulous providers have been caught mining user data to sell to third-party advertisers. Another unethical service piggybacked on idle bandwidth to build botnet armies. Plus, security researchers discovered how free VPN apps ship with inherent security risks — a 2016 survey found that over one-third contained malware.

Accessing Viafree.no can only be reliably done with a consistent provider that ensures top-tier speeds, reliable uptime, rigid encryption, and friendly customer support. These standards are only met by paid providers. We believe it’s in your best interests to shun free VPNs — all the ones recommended in this article have a money-back guarantee. That makes it possible for you to sign up and test the service — if it doesn’t suit you, simply ask for a refund.

Follow these simple steps to be able to stream Viafree.no outside Norway using a VPN:

What can I watch on Viafree.no?

Some of the most popular titles on Viafree.no are:

Viafree.no is a free video streaming service but is only contractually licensed to display content in the Nordic region. With lots of programming in drama, comedy, and sports, the channel is able to deliver this content via targeted advertisements that pop up while you stream. That’s part of the reason why Viafree.no is geo-restricted—it stands to lose its licensing deals if the platform were to open up to subscribers from around the world.

VPNs are capable of several tasks other than just streaming television shows and movies.

For example, the encrypted tunnel that VPN providers set up make it a hassle-free experience to access public wifi. These wifi networks are typically found at airports, hotels, malls, and coffee shops. Encryption means all hackers and snoopers are kept at an arm’s length, even your internet service provider won’t be able to figure out what you’re up to on the internet.

Furthermore, VPNs can also help you log in to your online bank account. This is particularly useful when you’re traveling — the last thing you want is for your funds to be frozen or your credit card to be temporarily blocked. It can take a long (and expensive) long-distance customer support call to resolve the matter.

If you use a VPN and connect to a server in your home country before logging in to your online bank account, it’ll appear as if you never left your country. This means no red flags or other compliance-related concerns. Plus, the encryption aspect means sensitive financial data is kept secure.