How to watch The Challenge: Double Agents (Season 36) online

Traveling abroad but want to continue watching The Challenge: Double Agents online? Although this show is region-locked, you’ll be able to unblock and live stream season 36 of The Challenge abroad using a VPN. Read on to find out how!
Mark Gill TECH JOURNALIST, VPN AND PRIVACY SPECIALIST 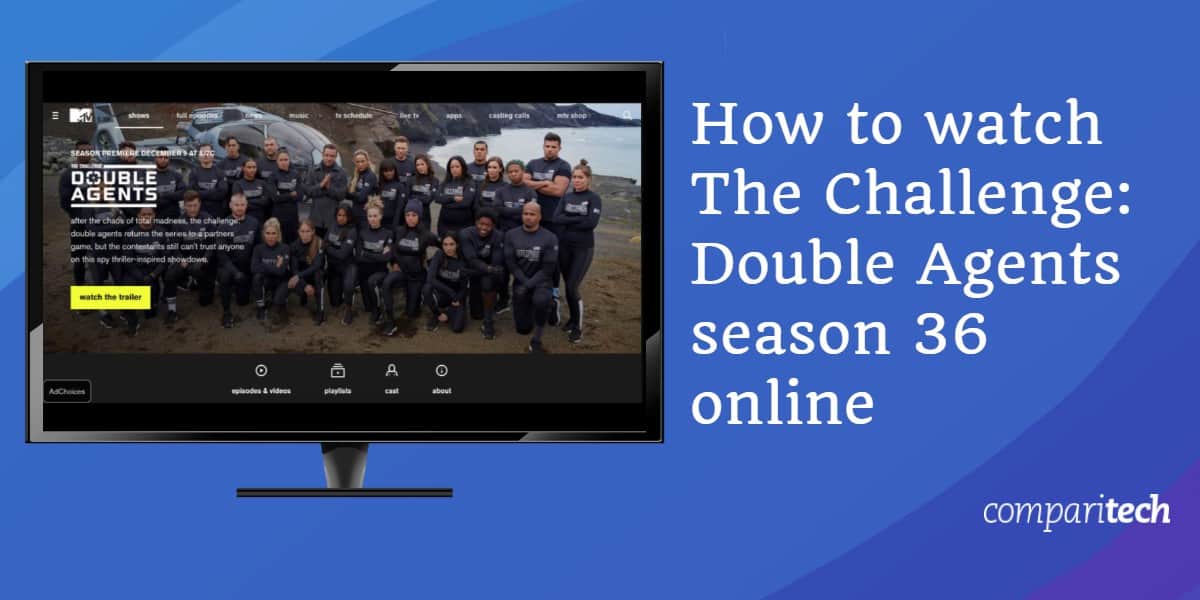 The Challenge: Double Agents (Season 36) is scheduled to premiere on Wednesday, December 9, at 8 PM EST (5 PM PST). The new season will feature past contestants from various reality shows including Big Brother and Shipwrecked as they compete for a $1 million USD prize. The US version of MTV is geo-blocked which means you’ll need a Virtual Private Network (VPN) to watch The Challenge: Double Agents abroad.

We’re only recommending official sources for watching The Challenge Season 36 online. While you may encounter unauthorized streams, they’re likely to be of inferior quality. Aside from low resolution and excessive buffering, unlicensed sources risk being taken offline for violating copyright. By sticking with the official sources listed in this post, you can be sure of the highest quality and that you won’t miss out on the season 36 premiere.

The Challenge: Double Agents will only be available on region-locked platforms. If you’re traveling abroad, you’ll need a VPN to continue watching via your regular streaming services from home.

How to watch The Challenge Season 36 online with a VPN

A VPN creates a secure, encrypted connection between your device and the internet. All of your internet traffic is routed to a server in the location of your choosing. By connecting to a VPN server in the United States, you can get a US IP address for unblocking MTV abroad.

Here’s how to watch The Challenge (season 36) abroad using a VPN:

The Challenge: Double Agents will broadcast live on MTV. By testing your VPN with MTV ahead of the season 36 premiere, you can avoid any last-minute hiccups. If you have any technical issues, it’s a good idea to contact your VPN’s customer support for assistance.

How to watch The Challenge Season 36 on US TV

With a US cable TV subscription, you can watch The Challenge: Double Agents (season 36) on MTV USA at no extra cost. All you need to do is go to the MTV website or app and sign in using your cable TV login details. This is usually an email address or username as well as a password. Once signed in, you’re all set.

If you don’t have cable, don’t worry. There are a couple of ways to watch MTV cable-free. First off, it’s worth knowing that MTV provides the option of a 24-hour pass. This means you can access all of its content without having to sign in with your TV provider. However, you still have to register your pass, providing your email address and date of birth.

NordVPN offers reliable unblocking of MTV and other major streaming services such as YouTube TV. It comes with a 30-day money-back guarantee which means you can try it risk-free. If you decide not to continue, all you need to do is request a refund for your money back.

Where else can I watch The Challenge?

You can also watch The Challenge: Double Agents with Amazon Prime Video. There you have the option of purchasing individual episodes for $1.99 (SD) and $2.99 (HD). Prices for full seasons vary from season to season but are typically priced at $19.99 (SD) and $24.99 (HD).

While Amazon Prime is available across many countries, CBS All Access is limited to the US. For this reason, you’ll need to use a VPN and get a US IP address to watch it abroad.

What can we expect from The Challenge: Double Agents?

The Challenge: Double Agents is the thirty-sixth season of The Challenge, an MTV reality competition that first aired in 1998. Filmed amid the COVID-19 pandemic, season 36 takes the 30 contestants (15 male and 15 female) to Iceland where they will be competing for a share of a $1 million prize. According to MTV, it will have an “espionage thriller” theme as well as a return to the partner format.

We can expect to see plenty of familiar faces because, aside from the return of several fan favorites from The Challenge, season 36 will also feature alumni from other popular reality shows. This includes contestants from Big Brother, Geordie Shore, Survivor, and The Amazing Race.

Who are the cast of The Challenge: Double Agents?