How to watch The Hunt online from anywhere

Not sure where you can watch The Hunt online? Read on to find out exactly where you can find the 2020 horror thriller movie and how a VPN lets you stream it from any location.
Mark Gill TECH JOURNALIST, VPN AND PRIVACY SPECIALIST 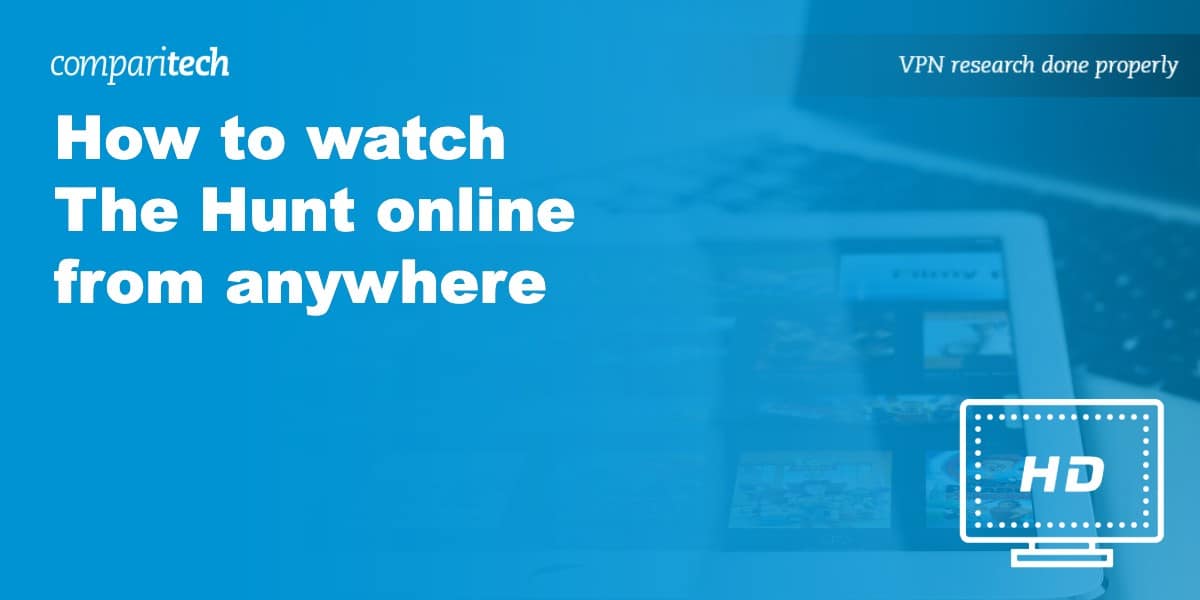 The Hunt was originally scheduled for release in August 2019, but was delayed to March 2020 when the onset of the Covid-19 pandemic resulted in the closure of most theaters. According to The Hunt’s marketing: “The most talked about movie of the year is one that no one’s actually seen”. Another reason for this is that the American horror thriller is region locked in many countries. Fortunately there’s a solution, and it comes in the form of a Virtual Private Network (VPN).

We’re only recommending official sources for watching The Hunt online. While there are unlicensed streams, they suffer from a number of issues. Most notably, they’re often of poor quality with low resolution and a lot of lag and buffering. Furthermore, many of these unauthorized streams are quickly taken offline for violating copyright. Besides, there are multiple official sources for watching The Hunt online and a VPN lets you access them all.

The Hunt is streaming on region-locked platforms. Traveling abroad? To continue watching via your usual home streaming service, you’ll need to connect to a VPN.

How to watch The Hunt online with a VPN

You can use a VPN to connect to a server in another country. This changes your IP address and makes it look as if you’re streaming from that location. Aside from numerous security and privacy benefits, this allows you to access geo-blocked content such as The Hunt.

Here’s how to live stream The Hunt from abroad using a VPN:

NordVPN is offering a fully-featured risk-free 30 day trial if you sign up at this page. You can use the VPN rated #1 for Netflix with no restrictions for a month—ideal if you’re traveling abroad and The Hunt is region-locked in your location.

How to watch The Hunt online

The Hunt is available to stream on Netflix in the following countries: the UK, Australia, Israel, Sweden, and Ukraine. Netflix subscription prices vary by country but, as an example, plans start from GBP £5.99 in the UK ($7.85). However, it’s important to keep in mind that Netflix has a reputation for being particularly tricky to access from abroad. This is due to geographic restrictions on content and anti-VPN measures in place to enforce this.

The good news is that the top VPNs continue to work with Netflix. Furthermore, watching The Hunt on Netflix while traveling abroad is quick and easy. It involves connecting to a VPN server in one of the countries listed above. For example, a server in Australia. You’ll then be automatically assigned an Australian IP address for accessing Netflix Australia as normal. NordVPN works well with Netflix and includes a risk-free 30-day money-back guarantee.

Where else can I watch The Hunt online?

The Hunt is also available to stream at no extra cost on Amazon Prime Video in select countries. This includes (but is not limited to) Australia, Germany, and, Italy, and Spain. However, it’s not available in countries such as Canada, France, the UK or US. To watch, you’ll need an Amazon Prime subscription. Like Netflix, the cost of Amazon Prime Video varies from country to country.

If The Hunt is not available in your country for free as part of your Amazon Prime subscription, you’ll almost certainly have the option to buy or rent the title. For example, it costs $3.99 to rent the title in the US and $14.99 to purchase it outright. In the UK, it’s much cheaper to buy (GBP £5.49) while the rental price is similar to the US at GBP £3.49.

Remember that if you’re traveling abroad, you’ll likely need a VPN to watch The Hunt online. In this case, connect to a server in a country such as Australia or Germany to change your IP address. The content should then be unblocked and available to stream in your location!

What should I know about The Hunt?

The Hunt is a 2020 American horror thriller movie that courted some controversy upon release, particularly in conservative media for its portrayal of Trump supporters being hunted by liberals. Indeed, the plot revolves around twelve strangers who wake up in a clearing without knowing where they are or how they got there. They also don’t yet know that they’ve been chosen for a specific purpose—to be hunted for sport.

Who is in the cast of The Hunt?

The Hunt of the cast includes Betty Gilpin as Crystal May Creasey, Hilary Swank as Athena Stone, Wayne Duvall as Don, Ethan Suplee as Gary, and Ike Barinholtz as Moses. The film is directed by Craig Zobel.