Atlas VPN not working with Amazon Prime Video? Try this!

Want to watch Amazon Prime Video while connected to Atlas VPN? This VPN successfully unblocks Prime Video but if it’s not working, there are a few quick and easy things you can try.
Mark Gill TECH JOURNALIST, VPN AND PRIVACY SPECIALIST 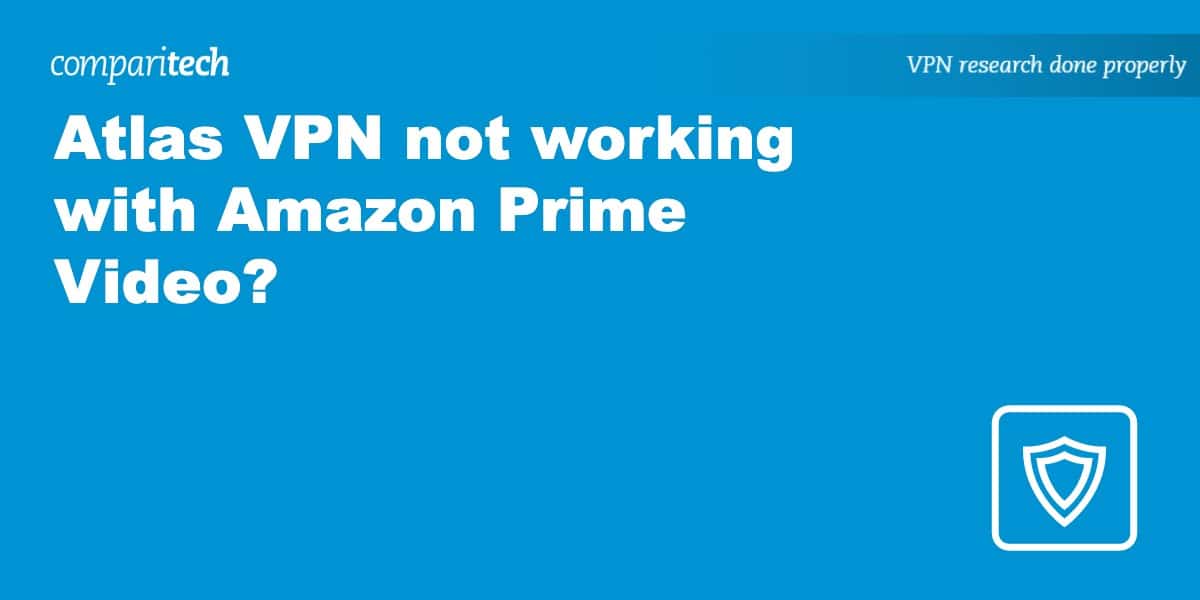 If you’re on vacation, you may find that you can no longer stream Amazon Prime Video. Most TV shows and movies alike are subject to many different licensing agreements. So while Prime Video may hold the rights to a particular title in one country, it might not in another. Amazon Prime Video adheres to these agreements by ensuring the content in question is region-locked. That’s why you’ll likely encounter an error such as:

“This video isn’t available due to geographical licensing restrictions.”

A VPN like Atlas VPN can help you bypass geographic restrictions. This is achieved by connecting to a server in your home country, changing your IP address, and spoofing your location. We’ve found that Atlas VPN usually lets you access your country’s Prime Video library from abroad. Unfortunately, no VPN is immune from the occasional unblocking issue. Below, we explain why Atlas VPN isn’t working with Amazon Prime Video and what you can do to get it working again.

There are a few reasons why Atlas VPN isn’t working with Amazon Prime Video. The good news is that these are minor issues that can usually be fixed in a minute or two.

So how are you supposed to know which of the above is causing your issue? And how do you go about fixing it?

Here’s how to fix Atlas VPN not working with Amazon Prime Video:

On the off-chance that Atlas VPN still can’t unblock Prime Video, try contacting Atlas VPN’s customer support. It’s worth asking if they can recommend a specific server that works with Prime Video. Alternatively, you can always try some of the other best VPNs for Prime Video such as NordVPN or Surfshark.

How to sign in to Amazon Prime Video with Atlas VPN

Not familiar with how to use a VPN? The good news is that Atlas VPN provides beginner-friendly apps and comes with 24/7 live chat support.

Here’s how you can sign in to Amazon Prime Video using Atlas VPN:

NEED AN ALTERNATIVE? TRY THE BEST VPN FOR PRIME RISK-FREE

NordVPN is offering a fully-featured risk-free 30-day trial if you sign up at this page. You can use the VPN rated #1 for Amazon Prime Video with no restrictions for a month—great if you want to binge your favorite show or are going on a short trip.

Streaming services such as Amazon Prime Video don’t own exclusive streaming rights to all of the TV shows and movies on their platforms. Indeed, many titles can be found on different platforms across different countries. Amazon Prime Video must respect existing licensing agreements and ensure that if it doesn’t knowingly show a title in a particular country. The content is region-locked to make sure it’s inaccessible.

The geographic restrictions imposed by Amazon Prime Video will impact you even if you’re only traveling abroad for a short vacation. This is understandably frustrating if you want to continue accessing your paid Prime Video subscription as normal. It’s for this reason that you may wish to use a VPN. Not only can you continue watching your favorite TV shows, you’ll be able to do so more securely.

What can I watch on Amazon Prime Video?

You can find Amazon Originals across most country versions of Prime Video. However, titles from third party studios and TV networks vary by country. Here are some of the more popular titles you can find:

How does Amazon Prime Video know if I’m using a VPN?

Each device you use to browse the web has a unique identifying number known as an IP address. It’s not difficult to find out the country from which the IP address originates. Prime Video looks at this and, if it sees that you’re located where a particular title isn’t available, region-locks the content. A VPN can be used to evade detection. However, if multiple users access Prime Video from the same IP address, it’s likely to be identified as belonging to a VPN. Amazon will also block connections from IP addresses known to belong to data centers instead of residences. Known VPN IP addresses are added to a blacklist and no longer work with Prime Video.

Are there any free VPNs that work with Amazon Prime Video?

You’re unlikely to find a free VPN that works with Prime Video. Most free VPNs only offer servers in a select few locations. There aren’t many IP addresses to go around and with so many users, they quickly become blacklisted by streaming services such as Prime Video. Besides, servers are very heavily populated and the average free VPN throttles bandwidth in an attempt to manage this. As a result, the slow speeds make streaming a challenge. Even if you are able to access Prime Video, you can expect low resolution, lag-filled video.