Looking for a VPN to use with Stremio? We reveal the best VPNs for Stremio that offer fast speeds and protect your privacy while streaming online.
Sam Cook Data journalist, privacy advocate and cord-cutting expert 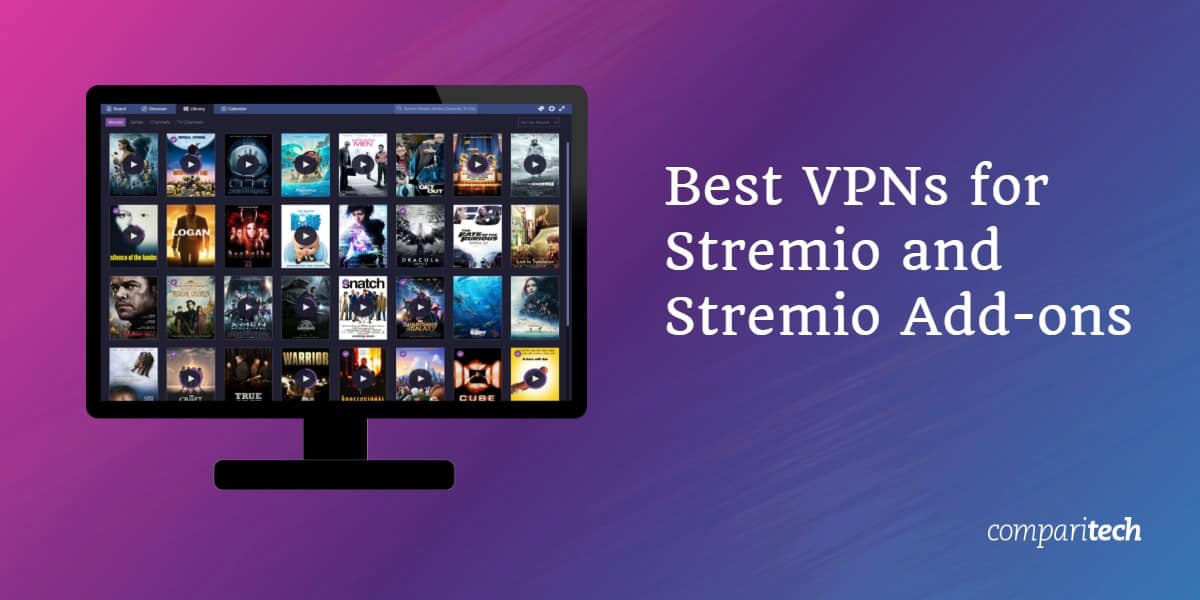 The Stremio media player is an excellent way to watch TV shows and movies, either locally from your computer or streamed online. Stremio operates much like other popular media players, such as Kodi. While you can play videos and music files locally from your computer, the primary draw to the program is its ability to play streaming videos directly through the application using plugins known as “addons.”

Stremio has a handful of addons available for free. Most of the addons available for the service are for common and free streaming services, such as Twitch and YouTube. And while Stremio is very limited in the number of plugins it has on offer, it is one of the only media players of its kind with a fully functional Netflix addon.

Outside of that, there are a few unconventional Stremio addons specifically designed around pirating online content. These addons, such as Popcorn Time and Juan Carlos 2, are all third-party plugins and ones we do not endorse for Stremio users. That said, regardless of what Stremio addons you’re using, you’ll want to consider your privacy and security concerns when streaming videos online.

Because Stremio primarily focuses on streaming online videos, there’s a good chance you’ll want to avoid speed throttling from your ISP. You may also want to bypass geographic content blocking while using Stremio. Whether you’re watching YouTube or Netflix through the media player, there are several virtual private networks (VPNs) that can ensure your privacy, avoid ISP speed throttling, and bypass geographic content restrictions.

The following VPNs are the best for those who want to guarantee their privacy while streaming through Stremio. In the rest of this post, we get into the details of each VPN that made this list, but if you are short of time, here is a summary list of the best VPNs for Stremio:

When looking for the best VPNs for Stremio, there are a few important criteria you’ll likely want:

The best VPNs for Stremio

With these criteria in mind, here are the best VPN options for Stremio and its available addons.

NordVPN our top pick for a Stremio VPN. Not only does it work to help bypass Netflix geographic content restrictions, but users can also connect up to six devices simultaneously. NordVPN is the fastest service we’ve tested and operates a larger network than most providers, with over 5,100 servers.

High-level encryption, fast servers, multiple server options, and a no-logs policy are all standard with this service. It’s also one of the only VPN providers that offer a variety of server types, including Onion over VPN, VPNs designed for P2P, obfuscated servers, and anti-DDoS. And thankfully, NordVPN is among the cheapest VPN services you’ll find, usually offering deep discounts on different plans. Positively, you can try NordVPN for 30 days before making any final decisions.

NordVPN can be installed on Windows, Mac, iOS, Android, Chrome OS, Linux, and almost any other operating system you can think of. You can also install the software on routers running DD-WRT, Tomato, and other router firmware systems.

BEST VPN FOR STREMIO:NordVPN is our top choice. It’s incredibly fast and works well with Stremio and other sites. It offers strong security features and accommodates up to 6 devices. A 30-day money back guarantee makes it risk-free.

Surfshark is a budget-conscious service that’s starting to make a name for itself as a result of its excellent unblocking abilities. As well as working with Stremio, it unblocks services like Netflix and Amazon Prime Video. Better still, with 1,700+ servers in 63 countries, no connection limit, and generally solid speeds, users can watch a huge range of content, in the highest possible quality, wherever they are.

Security is one of this service’s strongest areas. Your data is kept safe with a customizable kill switch, 256-bit encryption, and protection against DNS and IPv6 leaks, but that’s not all. There’s also a built-in malware-scanner, multi-hop servers, and a NoBorders mode that can even let you browse freely in places like China. Surfshark doesn’t keep any logs and operates a 24/7 live chat service in case you should run into any problems.

BEST BUDGET VPN:Surfshark is a great low-cost option. Its steady speeds and top-notch security features also make it a strong choice for torrenting or even just browsing anonymously. This no-logs VPN comes with a 30-day money-back guarantee.

ExpressVPN is another solid choice for a Stremio VPN. The service has a strict no-logs policy and 24-hour customer support, and supports simultaneous logins from multiple devices.

Additionally, you’ll find that ExpressVPN has an expansive network. With over 3,000 servers across 94 countries, you’ll easily find a fast server with good bandwidth. And thanks to a large number of servers, you can easily geo-hop into any almost any region you want and access regionally-specific content through Netflix.

Combine all of those features with the service’s military-grade encryption (AES-256, the same standard used by the U.S. government) and ExpressVPN becomes a great option to pair with Stremio.

Stremio currently works on Windows, Mac, Linux, iOS, and Android. ExpressVPN works on all of these operating systems, as well as through a browser plugin for Chrome, Firefox, and Safari. You can also install ExpressVPN on routers, making it a good option for those with Stremio installed in multiple locations.

FAST AND RELIABLE:ExpressVPN operates a vast server network that can unblock Stremio and other streaming content. It has user-friendly apps for all operating systems and strong security and privacy features. Plans include a 30-day money-back guarantee.

Although it’s not among the better-known options on our list, CyberGhost makes a great pairing with Stremio. As we’ve found, it’s one of the few VPNs that can bypass Netflix geographic content restrictions, making it easy to enjoy Netflix on Stremio. Additionally, because CyberGhost uses top-level VPN technology, its speeds and server quality match those of the more well-known services. And because CyberGhost has a smaller pool of users, you’re also less likely to experience server congestion when compared to competing services like ExpressVPN and NordVPN.

All of the necessary criteria for a Stremio VPN are met here. The company offers a no-logs policy, AES-256 encryption, multiple device logins, and comes at a low cost when purchasing their 2-year subscription (less than $4 per month).

Like NordVPN, CyberGhost has servers in 60 countries. CyberGhost also offers over 3,700 servers, with a total bandwidth across all servers at about 50 Gigabits/second.

CyberGhost is available for all operating systems you may be using for Stremio, including Windows, MacOS, iOS, and Android. There are also options for Linux and some routers.


If you’re looking for something a bit smaller, PrivateVPN might be a good option for you. For Stremio users, PrivateVPN mostly hits all of the criteria that we look for. It has fast servers, a low cost, a no-logs policy, unlimited bandwidth, and bypasses geographic content restrictions. PrivateVPN also has servers in over 50 countries, making it easy to access a large number of Netflix regions through Stremio.

The only downside to PrivateVPN is that it has far fewer VPN servers than most competitors, at only 100. However, that may not be as bad as it sounds. Given its smaller size and fewer users, PrivateVPN can offer equally fast speeds through its servers due to much less server congestion.

Unlike the other options on the list, PrivateVPN gives a very generous 30-day money-back guarantee. This makes PrivateVPN the best option for Stremio VPN users who want to try before they commit.

PrivateVPN has apps available for Android and iOS devices, as well as Windows and Mac computers.

GREAT SPEED:PrivateVPN is a good family choice. Works with Stremio and allows up to 6 devices on the same account. Not as many servers to chose from as other providers on this list. 30-day money back guarantee.

IPVanish is one of the most popular VPN providers you’ll find. However, it bottoms out our list because it’s lacking in one significant feature: bypassing the Netflix proxy ban. IPVanish excels in all other areas important for a Stremio VPN, however. The service has military-grade encryption, a no-logs policy, and comes in at a very low cost for users.

Additionally, you’ll find that IPVanish boasts more than 1,000 fast servers in over 60 countries, IPVanish offers up a large amount of choice for Stremio users.

IPVanish is available on any device you might be using, including Windows, Macs, Android devices, iOS devices, routers, and more. It’s also one of the only VPN services with a native app for the Amazon Firestick.

LARGE SERVER NETWORK:IPVanish works with up to 10 connected devices. Fast connections, lightweight easy to use apps, good multi-platform support. Reliable with Stremio but can’t unblock as many streaming sites as some of its rivals. 30-day money-back guarantee.

Stremio vs Kodi vs Plex: What’s the difference?

Although it has a clear competitive advantage thanks to its functional Netflix plugin, Stremio is admittedly a rather small and limited option compared to other media players. Its primary competition is the Kodi media player and the Plex media server. While all three options allow for plugin-based streaming, each operates differently in the media player space.

Stremio operates primarily as a web browser. You can install plugins and run those plugins from the app, but Stremio is most useful for browsing for new content. This is why you’ll find a lot of movie and TV show information available by default through your Stremio application.

Kodi is a media player that comes with no plugins installed and no native integrations for any other services. Instead, you can install authorized and legal plugins from the official Kodi addon repository (which is available upon install), or download third-party addons and addon repositories. You’ll find Kodi is a bit more versatile than Stremio, and because Kodi has been around for far longer, it has a much larger library of plugins and a far larger user base as well. It also provides a clearer, more refined viewing experience thanks to having been refined over the course of more than a decade with a large team of developers.

Plex is a different application than the other two. Plex is less a media player and more a “media server,” as the name indicates. Plex is designed to allow you to stream all of your media, from movies to music, from any device. The primary focus of Plex is creating an online connection to your stored media so that you can access it from anywhere, on the go. However, Plex does serve as a media player, can be installed on a large number of devices, and has a large library of third-party and official addons you can utilize. Like Stremio, Plex has a smaller user base, so its plugin database is much smaller, but it does offer more options on that end than Stremio.

For more on these media players, check out our beginner’s guides on Kodi and Plex.