Does CyberGhost work with Netflix? We put it to the test 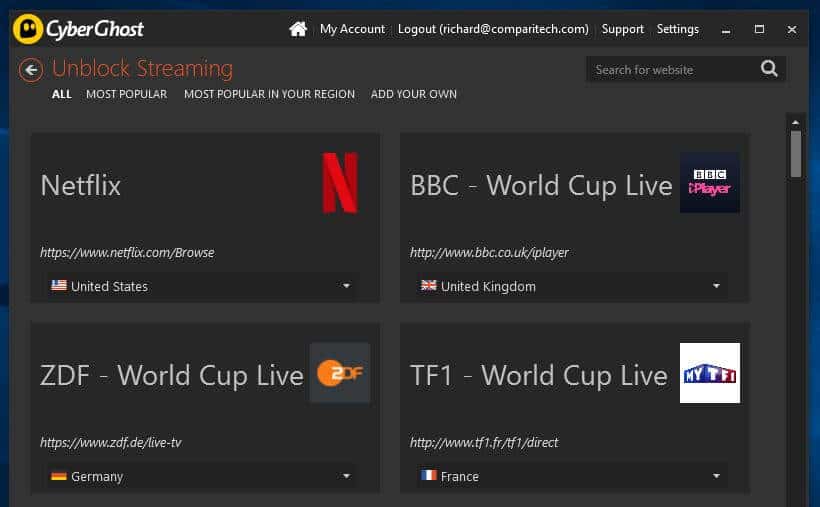 With Netflix cracking down on VPN usage, many providers are unable to reliably unblock Netflix. CyberGhost claims it can though, so we’re putting it to the test to find out if those claims are true.

To cut to the chase, CyberGhost does indeed unblock Netflix. Although it has struggled with Netflix’s VPN ban in the past, over the last year it has focused on providing access to at least the US and UK Netflix libraries through its desktop and mobile apps. Read on to find out more.

READER DEAL: You can save over 70% when you sign up for a two-year CyberGhost plan.

One of the primary reasons users opt to use a Virtual Private Network (VPN) is to unblock geo-restricted content, particularly streaming video from Netflix, Hulu, HBO, and BBC iPlayer. Netflix is particularly popular due it’s huge library of shows and movies, including a ton of high-quality original content. And although Netflix is available in more than 200 countries, each country’s library is different due to licensing restrictions. US Netflix is the most popular library, but other countries have plenty to offer, including Netflix UK, Netflix Japan, and Netflix Brazil.

By connecting to a VPN, you can access any of these libraries from anywhere in the world. The VPN will mask your IP address and replace it with one form a country of your choice. What’s more, a VPN encrypts all of your traffic, keeping it away from the prying eyes of snoopers, including your ISP.

We test a range of VPN providers on a regular basis to check that they’re working with popular streaming sites. Let’s see how CyberGhost fares with Netflix.

We’ll explain the process and results in more detail, but for a quick reference, the table below shows some of our main findings.

Do the CyberGhost desktop clients work with US Netflix?

We’ve tested CyberGhost with US Netflix many times in the past. While this provider did have issues unblocking the service last year, it has since focused on providing users seamless access to a few core Netflix libraries. In recent months, we’ve had no issues. But today we’re going to explore a little further to show you what to expect.

If you’re familiar with the CyberGhost desktop client, you’ll know that there are certain servers specifically optimized for streaming. However, to save you from having to scroll through all of these looking for the right one, you can simply type “Netflix” into the search bar and find exactly what you need.

So did these servers work? Yes, seamlessly! It should be noted that you may also be able to unblock these Netflix libraries using specific regular (i.e. not streaming) servers, but this is a bit hit or miss.

One thing to note is that when you use a NoSpy or streaming-optimized server, you don’t get to choose the city where the server is located, just the country. Some users with a particularly slow internet connection might want to use a server as geographically close to them as possible to minimize the risk of lag or buffering during streaming. In this case, you can simply click the arrow beside your desired country in the All Servers view.

Additionally, while we tried unblocking serveral other libraries including Netflix Australian, Canada, and Japan, we were unsuccessful.

So clearly some servers work to unblock Netflix while others don’t. This is certainly not a black mark against CyberGhost and many other top providers only offer a handful of servers that can unblock Netflix at a given time. What’s more, for many competitors, you have to contact customer support to ask which server can unblock Netflix because, unlike CyberGhost, they aren’t clearly labeled.

Do the CyberGhost mobile apps work with US Netflix?

We tested the CyberGhost iOS and Android apps to see if the results are similar. We simply logged in, picked a streaming server from the list and…

Success! We had no issues unblocking Netflix. 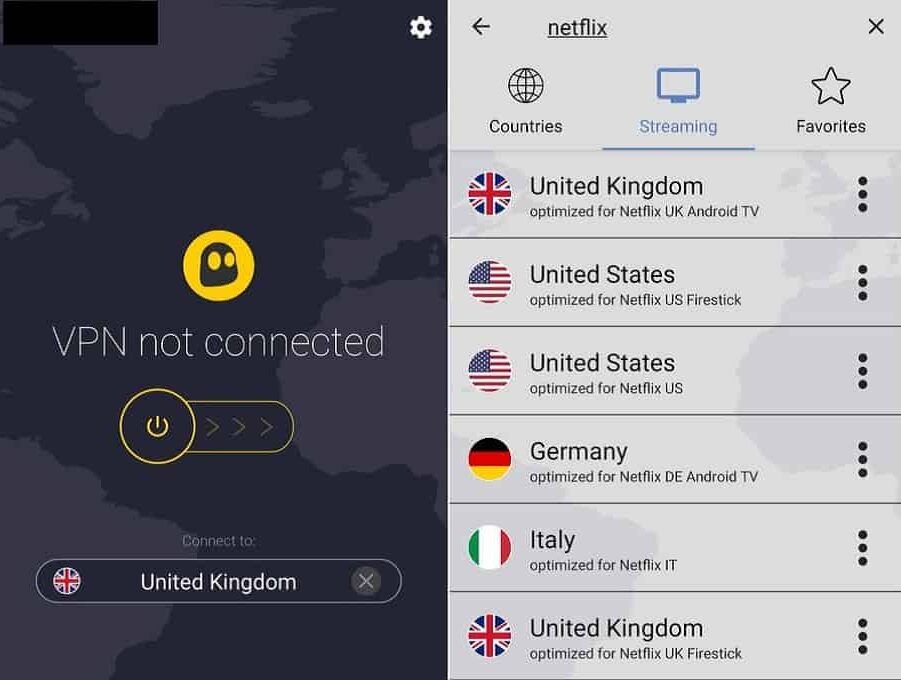 Next, we tried a server that didn’t have the streaming label, this time located in Los Angeles. This delivered a network error.

We tried a few more servers, some that had the streaming label and some that didn’t, and got similar results. Servers labelled as streaming worked to unblock Netflix while servers without the label didn’t work.

The server labeling does make it easier to find an appropriate server in a specific city. But if you still need help, again, you can simply contact customer support.

Netflix is now available in most countries, but because of licensing issues, each region’s catalog will be different. The Netflix US library is one of the biggest and most popular, but you may want access to other catalogs.

CyberGhost actually offers specific servers designed for unblocking Netflix UK, France, Italy, and Germany. Simply connect to these and you’ll be able to access the respective library without any problems. That said, we weren’t able to unblock any other libaries.

Bear in mind, with Netflix cracking down on VPN usage to access its services, a lot of resources go into enabling access. As such, many providers, including CyberGhost, need to prioritize. With the US library being so popular, it needs to be the primary focus.

For gaining access to Netflix in other regions, you can take a look at our dedicated articles for Netflix Japan, Netflix Spain, and Netflix Brazil.

Does CyberGhost work with other streaming sites?

Our latest tests show that CyberGhost can be used to unblock plenty of other streaming sites. This is just a sample list of sites we’ve tested recently:

Bear in mind, we can only test a few random servers, so there’s no guarantee all servers in the relevant region will work to unblock a streaming site. If you run into issues, it’s best to contact customer support. CyberGhost has live chat support during European business hours and a ticket submission system for the off hours.

The verdict on whether or not CyberGhost works with Netflix

In short, we had no issues accessing Netflix with the clearly-marked streaming servers. These work both in a browser and in the Netflix app, so you shouldn’t have any problems streaming on the go. Remember, if you run into any issues, CyberGhost offers 24/7support over live chat.