Are you looking to watch Netflix US from France? We'll show you how to access the American Netflix library from France and which VPNs are best for the job.
Paul Bischoff TECH WRITER, PRIVACY ADVOCATE AND VPN EXPERT 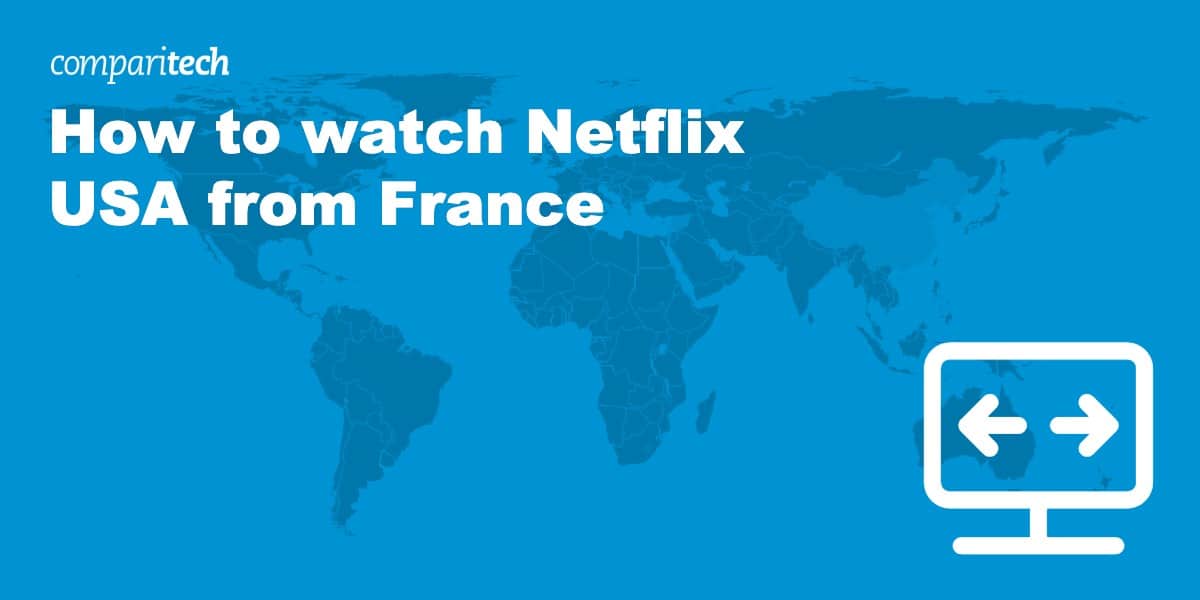 Netflix subscribers in France pay more for a monthly Netflix subscription and get fewer TV shows and movies than their American counterparts. Although Netflix has expanded its French library over the past few years, you can’t deny that there’s a lot of content that’s simply not available. So if you are currently traveling in France but don’t want to miss out on your favorite shows you’ll need the help of a Virtual Private Network (VPN) to access your home Netflix library.

A handful of VPNs can still securely access Netflix. We’ve gathered five of the best VPNs to watch US Netflix while traveling abroad in France or anywhere else in the world. If you don’t want to read the rest of the article, here’s a summary:

If you want to access Netflix’s American library while in France, you’ll need a VPN. A VPN encrypts your device’s internet connection and routes it through an intermediary server in a location of your choosing. In this case, you would connect to a VPN server in the US, which makes it seem as though you’re accessing Netflix from back home in the USA. Netflix will, therefore, grant you access to the larger catalog of TV shows and movies.

Not every server from a particular provider will watch Netflix. Typically a VPN provider operates a few Netflix-optimized servers, and these might not be apparent in the apps. You might need to contact customer support or consult your provider’s website in order to find out which server to connect to. All of the VPNs we recommend include live chat support that can walk you through what you need to do.

Best VPNs for US Netflix from France – at a glance

We’ve compared the most important features for the top VPNs here. Prefer to read the in-depth reviews? Start with NordVPN – our #1 choice for US Netflix from France.

NordVPN is our favorite VPN to stream US Netflix from France. It’s one of the most popular providers in the world, and there’s good reason for that. Almost every server works with Netflix. It can also securely access Netflix libraries in several other countries, including France, Australia, Canada, Japan, the Netherlands, and the UK. Not only that, it works with Hulu, Amazon Prime Video, and BBC iPlayer, among many other popular streaming sites.

NordVPN is among the fastest VPNs we’ve tested, so you can stream HD and 4K video without buffering. You also get beefy security and data leak protection, plus a kill switch that halts internet traffic if the VPN connection drops.

BEST VPN FOR NETFLIX USA:NordVPN is our #1 choice, with all the speed and server access you need to stream Netflix USA from France. It comes with a risk-free, 30-day, money-back guarantee.

Surfshark allows you to connect an unlimited number of devices on a single account, making it a great option for a family or group of housemates. Almost every server works with Netflix US; even connecting to servers in other countries will redirect you to US Netflix. That means there’s no anxiety about choosing the correct server to stream from.

Apps are available for Windows, MacOS, Linux, iOS, and Android.

BUDGET OPTION:Surfshark lets you watch Netflix on as many devices as you want and comes with a 30-day money-back guarantee.

ExpressVPN lets users watch American Netflix from abroad by connecting to any of its US locations. ExpressVPN is one of our top VPNs for speed, so you should have no problems streaming high-quality video from France. It also works with other geo-blocked content including that from BBC iPlayer, Hulu, HBO, and Amazon Prime Video.

Apps are available for Windows, MacOS, iOS, Android, Linux, Amazon Fire TV, and certain wifi routers. You can connect any five devices at one time on a single plan.

WATCH NETFLIX AND MORE:ExpressVPN is a great all-round VPN that works with US Netflix from abroad. You can try it risk-free with a 30-day money-back guarantee.

CyberGhost is one of the fastest and most secure VPNs we’ve tested. In addition to the traditional list of server locations, CyberGhost’s apps let you choose which streaming service you want to access. US Netflix is listed at the top along with several other streaming channels including Amazon Prime Video and BBC iPlayer. It will even open Netflix in a browser window for you, making it one of the most reliable Netflix VPNs around.

Apps are available for Windows, Linux, MacOS, iOS, and Android. You may connect up to seven devices at once on a standard plan.

SUPERB ACCESSIBILITY:CyberGhost makes watching US Netflix a breeze, and it comes with a 45-day money-back guarantee.

PrivateVPN excels at securely accessing international services like US Netflix and has fast servers to make streaming a breeze. Although its server network is smaller than the others on this list, PrivateVPN has a wide range of locations to choose from. The interface is simple and streaming servers are clearly labeled in the apps. PrivateVPN also works to stream Hulu and BBC iPlayer, among other services.

Apps are available for Windows, MacOS, iOS, and Android. You can connect up to 10 devices at a time.

SIMPLE AND EFFECTIVE:PrivateVPN gets the job done and works with US Netflix without hassle. Comes with a 30-day money-back guarantee.

Can I use a free VPN to watch US Netflix from France?

Paid VPNs have the resources and business incentive to keep Netflix-optimised servers maintained and available at all times for customers. We recommend you stick to paid VPNs and stay away from free alternatives.

French Netflix has a total of 6,413 titles at time of writing, according to our latest research:

Comparitech relies on real-world tests to ensure our recommendations are reliable.  Our team of international testers are instructed to connect to the VPN, open Netflix US, and attempt to watch a show. If the show plays, the tester records a positive result. And if the proxy error is returned instead, the result is negative.

This is done as a part of our wider Netflix VPN testing in which we test each VPN’s access to Netflix libraries in 20 countries on both the Netflix mobile app and the Netflix website in a desktop web browser. As of this year, we’ve conducted about 3,000 individual tests on 37 VPNs.

To ensure the VPN is not just redirecting to the US version of Netflix—many VPNs do this—we check each library for country-exclusive shows. This ensures we are connected to the intended country version of Netflix.

Is it legal to watch American Netflix from France?

Yes it's legal to access your home Netflix library with a VPN. VPNs are a great way to keep your data private and secure, and they're also a great way to bypass geographic restrictions on content. So as long as you're using a VPN that's based in the US, you should be able to watch all of the American Netflix content that you want. Enjoy!

Can I watch American Netflix without a VPN?

Yes, you can watch American Netflix without a VPN, but it's not the easiest option. Your best bet is to use a VPN because it will allow you to access the US version of Netflix without changing your DNS settings or installing any additional software.

Do I need a U.S. IP address to watch Netflix from France?

Why does Netflix have different shows in different countries?

Most streaming services (including Netflix) keep their costs down by only buying the rights to show TV shows in specific countries. For instance, they might offer more French-language content in France, without having to pay for global broadcasting rights.

As part of these agreements, broadcasters have to do their best to prevent anyone outside of these regions from watching. That's why streaming services tend to block VPN users, proxy servers, and so on. Unfortunately, this means that people traveling abroad may find themselves unable to keep watching their favorite shows until they get back home.

Netflix has gotten very good at detecting VPN usage in the last few years. Usually, if it realizes you're connected to one, it'll display an error such as the infamous "you seem to be using an unblocker or proxy" message. You might also find that you're only able to stream Netflix Original content, or that you're unable to log in with a VPN active.

The good news is that all of these problems will go away once you disconnect from the VPN. Here's something that should give you a little more peace of mind: we've been testing VPNs against Netflix for years -- some work, some don't, but we've never had an account banned and have never heard of any other user being banned simply for using a VPN either.