How to watch Canadian Netflix from anywhere

Looking to browse Netflix Canada while abroad? We explain how a Virtual Private Network (VPN) can help you unblock and watch Canadian Netflix from anywhere, and let you know the best VPNs to use.
Ian Garland Streaming, Kodi and VPN Expert 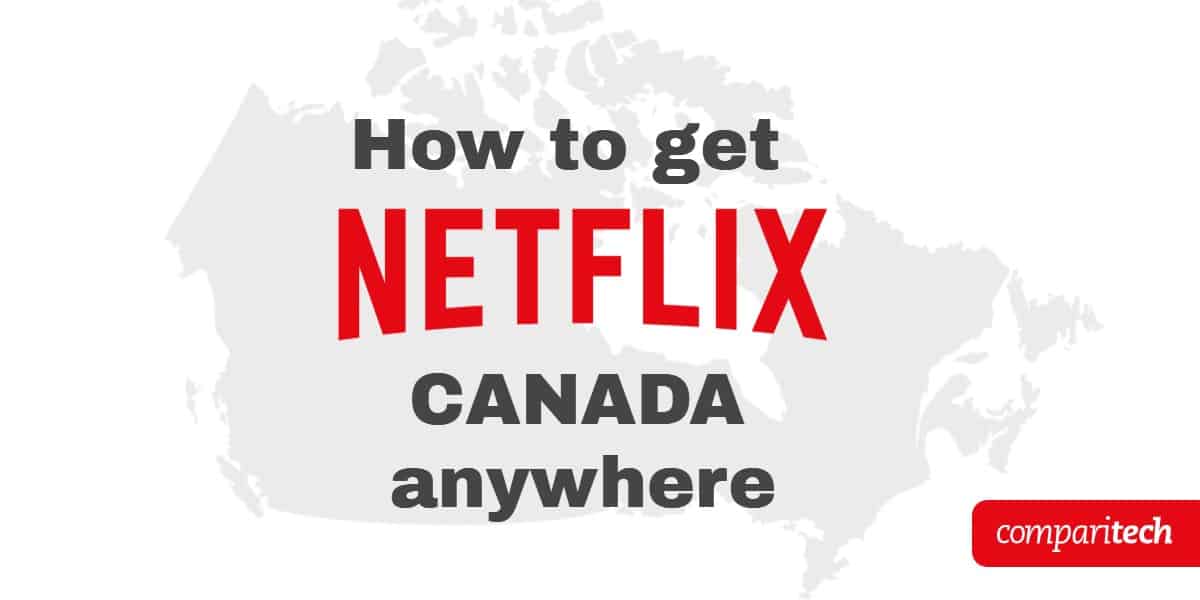 Netflix might be available almost everywhere, but there are often significant differences between what people in neighboring countries can actually watch. This platform is subject to complex international licensing laws, and as such, region-locks its content to prevent you from streaming certain titles outside of permitted locations.

Unfortunately, this means that if you’re traveling outside of Canada, you might not be able to stay up-to-date with whatever shows you’ve been watching. However, as Netflix uses your IP address to determine your location, you can unblock Canadian Netflix simply by connecting to a VPN server in Canada. Better still, this will encrypt your traffic, preventing your Internet Service Provider (ISP), employer, or other snoopers from seeing what you do online.

How to access Canadian Netflix from anywhere in the world

Setting up a VPN is simple and should only take a few minutes. Follow these steps below to unblock and stream Netflix Canada anywhere.

Here’s how to get Canadian Netflix from anywhere:

New VPN users certainly have plenty of choice. The problem is that every service is different and not all of them are able to unblock Canadian Netflix abroad. To make sure you get a reliable, versatile service that rises to any occasion, we decided to only recommend VPNs that fit all of the criteria below:

Read on for a quick look at the best VPNs for Netflix Canada. Alternatively, scroll down for a more detailed review of each.

Below, you’ll find short reviews of the best VPNs for Canadian Netflix:

ExpressVPN users have access to 3,000+ servers in 94 countries, which means you can use it to unblock not just Netflix Canada but plenty of other streaming services from around the world. Speeds are reliable and fast enough for you to watch without any noticeable buffering. Up to five simultaneous connections are permitted, so you can protect all of your favorite devices at once.

This service comes packed with security features like 256-bit AES encryption and protection against DNS and IPv6 leaks. You can also take advantage of a kill switch that immediately halts data transfer if you lose connection to the VPN. ExpressVPN clearly takes your privacy seriously; it accepts Bitcoin and doesn’t log any data that could be traced back to you. Customer support can be reached day or night over live chat.

ExpressVPN users can install Android, iOS, Windows, MacOS, or Linux apps. Additionally, you can use this service’s custom firmware to install it directly on your home router.

Find out more by reading the full ExpressVPN review.

NordVPN has more than 5,300 servers in 59 countries, with over 400 in Canada alone. Better still, it offers steady speeds, reliable connections, and strong unblocking ability, making it a natural choice for streaming Netflix abroad. Six simultaneous connections are permitted per account, so users can watch anywhere, without having to leave their other devices unprotected.

When it comes to security, NordVPN is one of the best around. It keeps you safe with 256-bit encryption, an app-specific kill switch, and protection against WebRTC, DNS, and IPv6 leaks, as well as automatic ad-blocking and malware-scanning. NordVPN doesn’t store any logs at all. Further, users can connect to obfuscated servers and pay in cryptocurrency for even greater privacy. Live chat is available around the clock should you run into difficulties.

NordVPN provides apps for Windows, Linux, MacOS, iOS, and Android devices. It can also be manually configured for use with supported network routers.

Surfshark is a reliable VPN with speedy connections and the ability to unblock Canadian Netflix from anywhere. In fact, with a network of 1,700+ servers in 63 countries, you’ll be able to access all kinds of platforms including BBC iPlayer and Hulu. This service differentiates itself from its rivals by allowing users to connect any number of devices. As such, it’s a low-cost, high-value VPN that’s particularly well-suited to large families.

This VPN offers IPv6 and DNS leak protection and 256-bit encryption, as well as a kill switch to protect your traffic from snoopers. That’s not all, though: it also comes with a hybrid malware-scanner and ad-blocker, plus a NoBorders mode that can help you get around country-wide internet restrictions. Surfshark is a zero-logs provider, so your privacy is all but guaranteed. Need help? This service operates a 24/7 live chat help desk.

PRIVACY GUARANTEED:Surfshark keeps no logs and uses cutting-edge security features, allowing you to stream safely anywhere. It has no problems with Netflix Canada or similar services and comes with a 30-day money-back guarantee.

Take a look at the complete Surfshark review.

IPVanish has over 30 servers to choose from in Canada, plus another 1,500 in 60+ other countries. With very high speeds, no bandwidth caps, and no limit on the number of devices you can connect, this service ensures you never have to stream, browse, or torrent without protection. Further, it unblocks several regional libraries including Netflix US, UK, and Japan.

This service offers a surprising number of security features considering how lightweight its apps are. There’s 256-bit encryption, a kill switch, and DNS leak protection, as well as the option to block LAN traffic or scramble your data, hiding the fact that you’re using a VPN at all. Further, IPVanish follows a strict no-logging policy and can’t divulge details of your activities under any circumstances. If you’re having trouble, its support team can be reached 24/7 over live chat.

IPVanish apps are available for Android, Windows, iOS, and MacOS. You can follow manual setup instructions to get it working with Linux systems or internet routers.

STREAM WITHOUT LIMITS:IPVanish offers high speeds and strong security, removing any barriers between you and Netflix Canada. Further, this VPN allows you to connect as many devices as you like. There’s also a 30-day money-back guarantee included.

Why not check out our in-depth review of IPVanish?

PrivateVPN doesn’t have the most servers, with roughly 150 in 60 countries, Canada included. However, what it lacks in network size, it makes up for in speed: this service is fast enough for flawless live streaming and can even handle 4K content with no lag or buffering. Better still, it can reliably unblock tricky platforms like Netflix, Amazon Prime Video, and BBC iPlayer.

It’s strong on the security front too. Your data is kept private using a combination of DNS and IPv6 leak protection, a customizable kill switch, 256-bit encryption, and automatic wifi protection. You can also enable the stealth mode to access services and networks that usually block VPN users by default. PrivateVPN does not keep any logs, so there’s no need to worry about your activities being revealed after the fact. This VPN’s support team is available at most times during the day via email or live chat.

SECURITY-FIRST VPN:PrivateVPN is extremely fast, which makes it ideal for streaming. It also excels in the areas of security and privacy, giving you peace of mind. PrivateVPN includes a 30-day money-back guarantee.

VyprVPN has around 700 servers in over 60 countries, including Canada. It’s more than fast enough for Netflix, and can reliably unblock many other stubborn services like BBC iPlayer, TSN, and HBO Go. There are no bandwidth limits and users can secure up to five devices simultaneously, giving you the freedom to watch both at home and on-the-move.

Thanks to this VPN’s 256-bit encryption, kill switch, and DNS leak protection, your activities are hidden from snoopers at all times. If you’d like, you can even enable a feature that connects automatically whenever you use a public wifi network. Further, VyprVPN keeps no logs and offers its own privacy-focused Chameleon protocol that’s designed for use in countries with strict online censorship. If you’re having problems, just contact customer support; staff are on-hand 24/7 over live chat.

SPEEDY AND SECURE:VyprVPN provides consistent speeds and the ability to watch Canadian Netflix from outside Canada. It also offers a 30-day money-back guarantee, a strict no-logging policy, and a wealth of advanced security tools.

Check out our full VyprVPN review.

Can I unblock Netflix Canada with a free VPN?

It’s important to note that while you may be able to stream Canadian Netflix with a free VPN, we strongly advise against doing so. There are several reasons for this, not least that free services tend to struggle with unblocking major streaming platforms. With fewer servers yet more users than their paid rivals, free VPNs usually only offer very slow speeds, which makes for laggy, choppy video.

There are security concerns too. Hackers love to disguise malware as free VPN apps since they know there’s huge demand. In fact, a recent survey of over 200 such apps found that almost one-in-four contained a virus. Equally troubling, nearly 20 percent of the seemingly safe apps failed to encrypt user data, meaning they were effectively useless from a privacy standpoint. For the best protection, we recommend using a reputable no-logs VPN instead of a free service.

What can I watch on Canadian Netflix?

Canadian Netflix subscribers have access to nearly 6,000 titles and a surprisingly large selection of content that’s not available in any other regional Netflix libraries. Here are a few of the TV shows and movies that are exclusive to Netflix Canada:

Technically, Netflix has the right to ban you for any reason. However, there haven’t been reports of Netflix banning people for using a VPN. It’s also worth noting it’s not illegal to use a VPN in most countries. The worst that’s likely to happen is you’ll be asked to disconnect the VPN before streaming.