The 2020-2021 NFL season is underway! This year, you can watch NFL games live without cable in the US and abroad through a handful of paid and free streaming options.
Sam Cook Data journalist, privacy advocate and cord-cutting expert

The first month of the 2020-2021 season was canceled, but NFL is back on the menu! Even as controversies are swirling and a national pandemic lockdown has fans blocked out stadiums, options to live stream 2020-2021 NFL games are still readily available. You can stream every 2020-2021 NFL game while in the US or traveling abroad this year using a few key sources and a VPN.

Note that this guide only recommends official sources for the 2020-2021 NFL season. American football is increasingly popular both inside and outside the US, but access while traveling is not always easy. Many fans turn to illegitimate streaming sources each year. However, most legitimate options can be unblocked with a VPN and allow fans to easily catch most games without turning to websites that may pose a security risk.

You may need a VPN to live stream the 2020-2021 NFL season on your usual home services while traveling abroad.

How to watch NFL games without cable using a VPN

If you’re in the US, you won’t need to worry; you can easily stream NFL games live, with many free options available. But if you’re connecting from abroad, you’ll need to consider a few additional options, some of which may require the use of a VPN to bypass geographic content restrictions.

Here’s how to stream NFL games without cable from anywhere:

Once you’re ready to stream NFL games live this year, consider one (or more) of the following services:

We’ll dive into more detail for each of these options, including costs and specific coverage details. 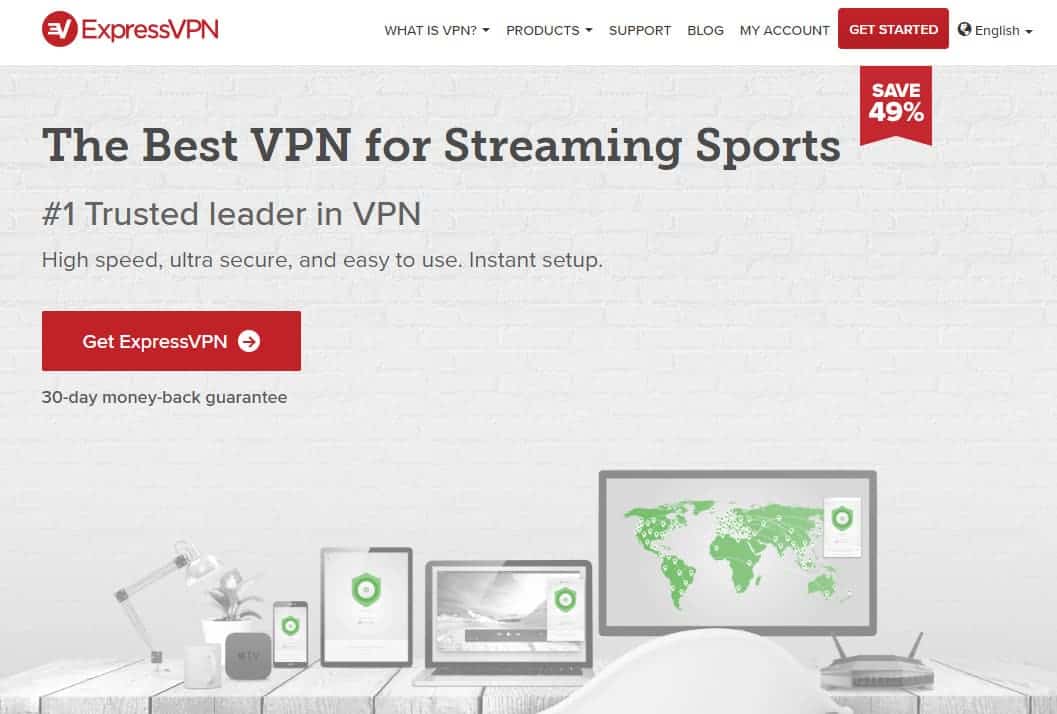 Streaming online comes with a number of risks, but for NFL fans the biggest single concern is geographic content blocking. Strict broadcast rights mean that even in the US, you won’t have access to every game due to regional blackouts. And if you’re outside the US, access is always an on-going problem, as you may just lack services that carry NFL games abroad.

If you’re hoping to access free or exclusive NFL content abroad, you can use a virtual private network, or VPN, to bypass geographic content restrictions. VPNs mask your real identity and allow you to connect to a server in the US or elsewhere where NFL streams are available.

The best option we’ve tested for NFL games and most sports is ExpressVPN. We’ve’ found it maintains among the fastest servers and gets around geographic content blocks commonly employed by the NFL’s broadcast partners. You’ll be able to enjoy the HD NFL streams you’re paying for without interruption.

We highly recommend connecting to an ExpressVPN German server to open up all games and bypass blackouts for NFL Game Pass.

How to watch NFL live anywhere in the world

NFL broadcast rights vary, but your best option to watch live games anywhere in the world is to use NFL Game Pass. In the US, NFL Game Pass only offers on-demand streaming of games after they air, while in the UK and Ireland some games are blacked out. But in many other countries, including Germany, Switzerland, and Austria, NFL Game Pass carries all available NFL 2020 games live without restrictions.

Here’s how to live stream NFL games on NFL Game Pass with a VPN:

How to watch the NFL without cable for free

Although many games were canceled, the 2020-2021 NFL still will still deliver over 200 games played in stadiums across the US. You can watch most, if not all, of these games through paid streaming services worldwide. However, there are a few free options you can avail yourself of anywhere in the world.

While not an entirely FREE option, if you already have an Amazon account, you can get Thursday Night Football without any additional cost. As of the 2020 season, Amazon Prime Video will also have sole international broadcast rights for one Saturday game. And if you’re abroad, a VPN will work to bypass Amazon’s content blocking, so you can stream select NFL games through Prime Video anywhere in the world.

According to Yahoo! Sports, its app carries “all local and primetime regular games” for 2020-2021. You can only stream via the smartphone or tablet app. And a select few games will only work when you’re connected to a mobile internet connection (.e.g, no WiFi). Those games include:

lf you can manage to download this app, you can watch these games for free. You may be able to download and stream Yahoo! Sports outside the US with a VPN. You’ll need to change your Google Play Store country first.

The Australian free-to-air network 7mate had a 4-year deal in place with the NFL that expired in 2019. Then the deal was extended for at least one year for the 2019-2020 season. It appears the deal remained in place for the 2020-2021 season as well.

7mate broadcasts both Sunday and Monday games. Anyone outside of Australia can access 7mate streams with a VPN.

USTV Now carries two key US-based broadcast channels: FOX and CBS. Coverage is fairly limited, however, as the service only offers one local FOX affiliate, and national FOX and CBS broadcasts which black out content for many games.

How to watch NFL games in the US

In the US, several broadcasters share the rights to the NFL. Currently, NFL broadcast rights are shared by:

To gain access to many of these options without cable, you’ll need one of several different streaming services. Currently, the best single-service option that provides the most number of games is stateside is fuboTV. At $54.99/month, fuboTV carries CBS, FOX, NBC, NFL RedZone, NFL Network, and ESPN. That means you’ll get AFC, NFC, Sunday Night, and Monday Night Football. Combine that with an Amazon Prime Video account ($8.99 per month separate, although Prime Video comes with a regular Amazon account as well), and you’ll have complete coverage to watch the 2020-2021 NFL season without cable.

If you want to keep everything under one roof, however, you may want to consider NFL Game Pass. This service offers every US game on-demand after it airs, with no blackouts. But if you want to watch everything live, you can sign up for NFL Game Pass and connect to your account through a VPN to a country where every live game is available through the service (including Germany, Switzerland, Spain, and other Eurozone countries).

There are some slightly more complex mix-and-matching options you can employ to get fairly wide coverage. For example, one method is to get Amazon Prime Video for Thursday Night Football. From there, you can add the CBS All Access as a Prime channel to get AFC games.

With those options, you’ll have almost every NFL channel, with the exception of ESPN and NBC, and your overall costs will be as follows:

From our research, this combination is the single best option to get the most number of NFL games without cable in the US for the least expense. However, if having multiple services is not up your alley, we strongly recommend you consider fuboTV, YouTube TV, or Hulu + Live TV.

Finally, don’t count out DAZN in the US. DAZN costs $20 per month in the US (or $99 per year). While the service does not carry NFL in the US market, we’ve found a VPN (including ExpressVPN) works with DAZN Canada (which does have live NFL games via NFL Game Pass). Using that combo, you can get NFL games live and at a much lower cost.

NFL fans in Canada have a few options to watch the NFL in 2020. Fans can purchase access to NFL Game Pass as a one-time payment for $74.99 to watch full live games and replays of every season game. Canadian NFL fans can also watch NFL games without cable using two other sources:

If you want to see every NFL game, DAZN is your best option. Not only does DAZN have streaming rights for most NFL games in Canada, but it also offers NFL Game Pass. And unlike in the US, where Game Pass only offers NFL replays, in Canada, Game Pass offers the games live and in HD.

DAZN is more expensive in Canada than in many other locations where it’s available but provides a large number of sport and options that help to justify the higher price. TSN is another option. The service has a standalone streaming app. TSN will carry most NFL games in Canada as well.

How to watch NFL games in the UK

Outside of the US, the UK is the third most popular place for American Football. There are a few easy-to-access options for UK NFL fans as well. Your best options for NFL in the UK include:

Now TV may be the best option for those who want access to Sky TV and Sky Sports without having to get any equipment. You can get a Now TV Entertainment Pass at a minimum, then add on Sky Sports Mobile. The total cost is just under £13 per month, making it far cheaper than signing up to Sky TV directly, which can be comparatively expensive.

How to watch NFL games in Australia

There are two cable-free options for NFL in Australia:

NFL Game Pass is the best route for Australia NFL fans, as it carries most games live, and every other game on-demand with full replays. It’s also easy to download and stream on a large number of devices. For those that want a free route, 7mate will have a select few games throughout the season (two per week, Sundays and Mondays). As it’s a free, over-the-air TV option, you can also tune in with an antenna. Foxtel Now is also a viable option, although the price may not be the best at $69 per month for access.

A few options exist for European countries outside of the UK. For those in Europe, some NFL streaming options include:

If available, DAZN is a great option. Not only does it offer NFL Game Pass, but it also provides a load of other sports options. Its low cost makes it a solid entry for European NFL fans.

For European countries where DAZN is not available, NFL Game Pass is the option to go with, where available. Prices will vary from country to country, so you’ll want to check what those prices are after logging into the NFL Game Pass website from your country. While NFL Game Pass offers every US NFL game live in many countries, it may only offer replays in some countries.

Even with a delayed season, there will be well over 200 NFL games happening this season. You may have a hard time catching every game if you stick to just one service, or don’t plan out how to get full coverage.

We suggest you mix live streaming options with on-demand replays to get the full experience. There are several sources you can use to look up the entire schedule of upcoming games.

You may also be able to find schedules from individual broadcasters that detail what games are available on their networks, and when. Check the “NFL” section for those sites to see if broadcast schedules are available.