Having trouble accessing Eurosport's live stream content outside of Europe? Find out how to gain access from anywhere with our round-up of the top VPNs for Eurosport.
Aimee O'Driscoll 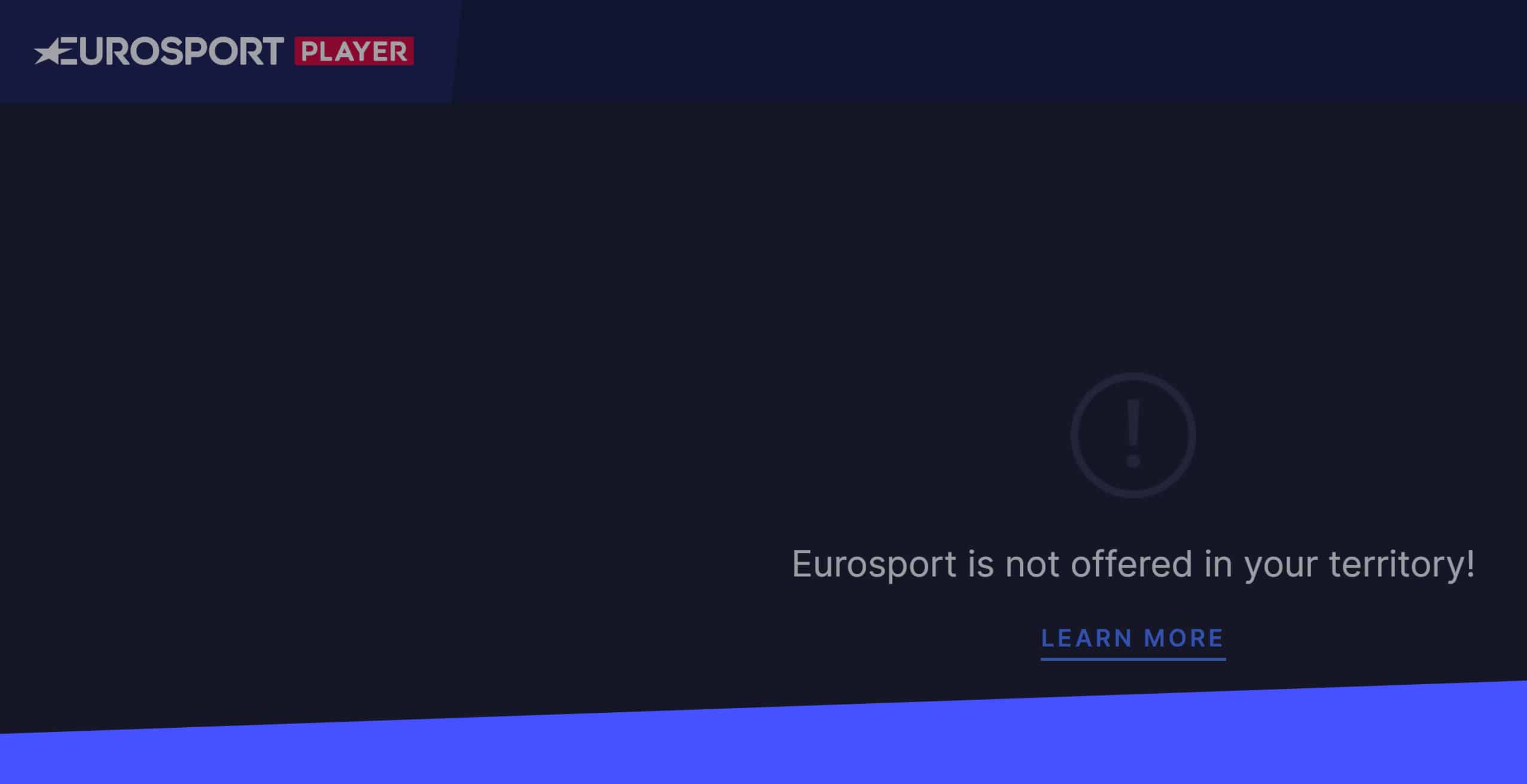 Eurosport is a European television channel with an online streaming service. On its website, you can watch videos and live stream content. However, the live content is only available through Eurosport Player, a paid subscription service that can only be accessed from within Europe. Trying to access it from outside Europe will deliver an error message: “Sorry, Eurosport Player is not available in this country.” If you want to watch this content while outside of Europe, your best bet is to use a Virtual Private Network (VPN).

A VPN can mask your location to make it appear you’re somewhere else. The VPN works by encrypting all of your internet traffic and tunneling it through an intermediary server in a location of your choice. So, by choosing a European server, you can watch Eurosport Player in the US, Canada, Australia, and anywhere else in the world. Note that it still requires a subscription which needs to be associated with a European billing address.

Now, although many VPN providers can help you access Eurosport, not all of them offer comparable services. Some are better at unblocking streaming platforms than others and may offer better speeds, security, and customer service than their competitors can provide.

We get into plenty of detail on each of the VPNs below, but if you are short of time, here’s a summary list of the top VPNs for Eurosport Player:

The best VPNs for Eurosport

To help you decide between them, we’ve compiled a list of the best VPNs for Eurosport based on the following criteria:

Here is our list of the best VPNs for Eurosport:

ExpressVPN’s large server network of more than 3,000 servers covers 94 countries, including many in Europe. Aside from accessing Eurosport, you can view other sports channels, including ESPN, BT Sport, and beIN SPORTS. Plus, for non-sports content, you can unblock sites like Netflix, Hulu, Amazon Prime Video, BBC iPlayer, and many more.

All of ExpressVPN’s servers are optimized for speed, making them ideal for streaming and downloading content. If you ever have trouble finding a server that can access the channel you want to watch, you can simply ping customer support for help. They should be able to point you to the right server and have you watching in no time.

With ExpressVPN, you can always be sure your online activity is secure and private. It uses 256-bit AES encryption along with perfect forward secrecy. A kill switch and DNS leak protection are built into the apps, so there’s no chance of your information ever leaving the encrypted tunnel. A no-logs policy means that ExpressVPN doesn’t monitor any of your activity and doesn’t record your IP address.

Plans allow for up to three simultaneous connections. Apps are available for Windows, MacOS, Linux, iOS, and Android. The VPN can be configured on some routers.

BEST VPN FOR EUROSPORT:ExpressVPN is our #1 Choice. A super fast and reliable choice for watching the Eurosport matches. Also unblocks all major streaming services including Netflix, Amazon Prime, BBC iPlayer, Sky Go and many more. Best-in-class security and privacy with 256-bit AES encryption, keep no browser logs, kill switch and leak protection. Try it risk-free with the 30-day money back guarantee.

Another top provider with a service that’s ideal for streaming is NordVPN. It pegs some great speeds and has a very impressive server network of more than 5,200 in over 60 countries, including over 2,400 servers in the UK and Europe. Many of these are optimized for specific purposes, such as P2P, double VPN, and anti-DDoS. You can get access to Eurosport, as well as other sports streaming sites, and can view content from popular sites like Hulu, Netflix, BBC iPlayer, HBO, and Amazon Prime Video.

NordVPN has you covered on the security and privacy front with 256-bit AES encryption, perfect forward secrecy, DNS leak protection, and a built-in kill switch. A strict no-logs policy ensures that no personally identifiable information or data regarding your online activity is ever tracked or stored.

Apps are available for Windows, MacOS, iOS, and Android, and the VPN can be configured manually with Linux and some routers. NordVPN allows you to connect up to six devices simultaneously on a basic plan, which is one up from the industry standard.

BEST BUDGET OPTION:NordVPN is a good value choice. A great value option which can unblock Eurosport matches. Connects up to 6 devices simultaneously. Good on privacy and security. 30-day money back guarantee.

Read our in-depth review of NordVPN.

With a growing network of almost 5,800 servers in 90 countries, CyberGhost is focusing on providing its users with access to a full range of streaming services. With hundreds of European servers, you should have no issues streaming Eurosport and other geo-restricted sports content. You’ll also be able to watch content from Netflix, Hulu, Amazon Prime Video, and more.

CyberGhost is ideal for traveling, especially when it comes to security. It provides automatic wifi protection on familiar networks, so you don’t have to deal with settings every time you connect to your hotel or other wifi network. Aside from that, CyberGhost has other strong security features. It uses 256-bit encryption with SHA256 authentication and perfect forward secrecy. This is backed by a kill switch and DNS leak protection. It keeps no traffic logs and minimal connection logs, but nothing that can be tied to an individual user.

VPN desktop clients are available for Windows, MacOS and Linux. Mobile apps can be downloaded for iOS and Android. CyberGhost can be configured with certain routers. You can connect up to seven devices at a given time.

VALUE AND PERFORMANCE:CyberGhost is easy to use. A well priced solid performer. Good at unblocking Eurosport and most other streaming sites. Comes with a 45-day money back guarantee.

Read our in-depth review of CyberGhost.

IPVanish has a decent server network of over 1,300 servers in more than 75 global locations. In Europe, it has over 450 servers, so accessing Eurosport won’t be an issue at all. Other sports channels also become available, including ESPN, beIN SPORTS, and BT Sport. IPVanish is particularly popular with Kodi users and torrenters and has some of the fastest speeds we’ve seen.

This provider doesn’t disappoint from a security and privacy standpoint. It uses 256-bit AES encryption, which is the gold-standard in the industry and is considered “military-grade.” This is in conjunction with SHA512 for authentication as well as perfect forward secrecy. A kill switch is built in and will kill the internet connection in case the VPN happens to drop. IPVanish keeps no logs whatsoever.

You can download apps for Windows, MacOS, iOS, and Android, and connect up to five devices with a basic plan. IPVanish can be configured manually with Linux and certain routers.

FAST AND RELIABLE:IPVanish has a large network of servers. Uncongested network achieves good speeds. Strong security and privacy features. Won’t unblock Netflix and could do with having live support. 7-day money back guarantee.

Although it has a much smaller network than many of its rivals, PrivateVPN does brilliantly in speed testing, making it ideal for streaming. Many of its servers are located in Europe, so unblocking Eurosport will be a breeze. PrivateVPN lets you access plenty of popular streaming sites, including Netflix, Amazon Prime Video, and BBC iPlayer, among others.

When it comes to security, PrivateVPN uses 128-bit CBC encryption for TAP and 256-bit AES for TUN on the default OpenVPN protocol. Both of these are considered un-crackable, although 256-bit is stronger. You get additional protection in the form of perfect forward secrecy, a kill switch, and DNS leak protection. PrivateVPN maintains no logs at all, so you can be sure your information won’t be available to any third parties.

Like NordVPN, PrivateVPN allows a generous six simultaneous connections per subscription. Apps are available for Windows, MacOS, iOS, and Android, with Linux and router configuration possible, too.

GREAT SPEED:PrivateVPN is a good family choice. Unblocks Eurosport. Also good for secure and private browsing and torrenting. Could do with having more servers and lacks 24/7 support. 30-day money back guarantee.

Can I use a free VPN with Eurosport?

When deciding which VPN to go with, the free options can be very tempting. However, using a free VPN simply won’t give you the same experience you’d get with a top-rated paid option, such as one of those listed above.

First, there’s the practical side of things. While a free VPN might unblock Eurosport, it’s unlikely to work with a lot of other popular streaming sites such as Netflix, Hulu, and BBC iPlayer. To make things even more frustrating, you might have to wait for an available server and endure slow, unreliable connections.

Then, you have problems on privacy side of things. Free VPN providers are known for using some questionable tactics in order to keep their businesses afloat. These include logging user activity, injecting ads, and even carrying malware. You could even find yourself caught up in a massive botnet scheme.

How to watch live content on Eurosport with a VPN

Due to licensing rights, the live content is geo-restricted. To watch live streams, you need to use Eurosport Player. If you try to access the player while connected to a non-European server, you’ll get the following error: “Sorry, Eurosport Player is not available in this country.”

That’s where a VPN comes in.

Here’s how to watch Eurosport abroad:

Note that different versions of Eurosport Player are available in different regions in Europe, the UK one being the most popular.

No matter where you sign in from, you’ll need to enter credentials. 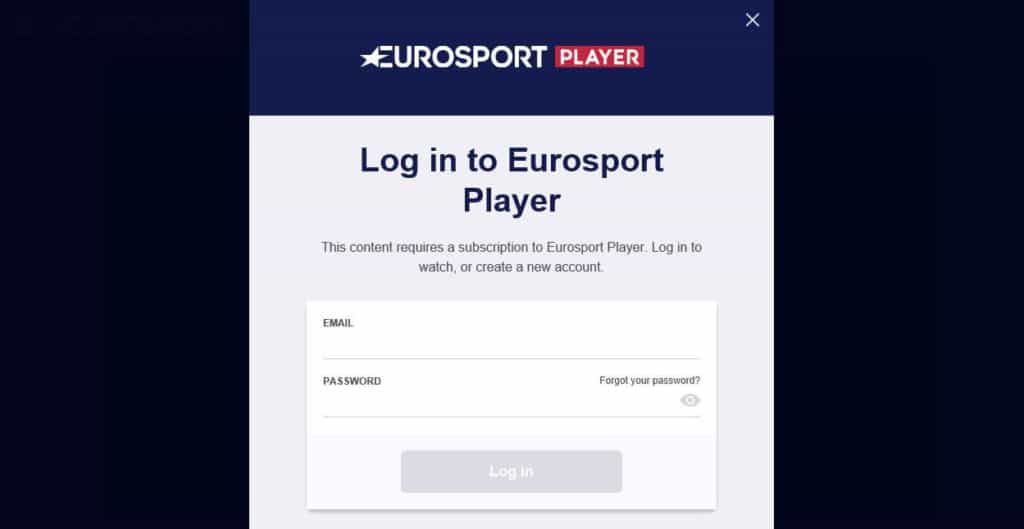 This means you need to have a paid subscription. Subscription options for UK residents are monthly or annual passes. However, there is a seven-day free trial, which is ideal if you just want to watch one event or several taking place in close succession. 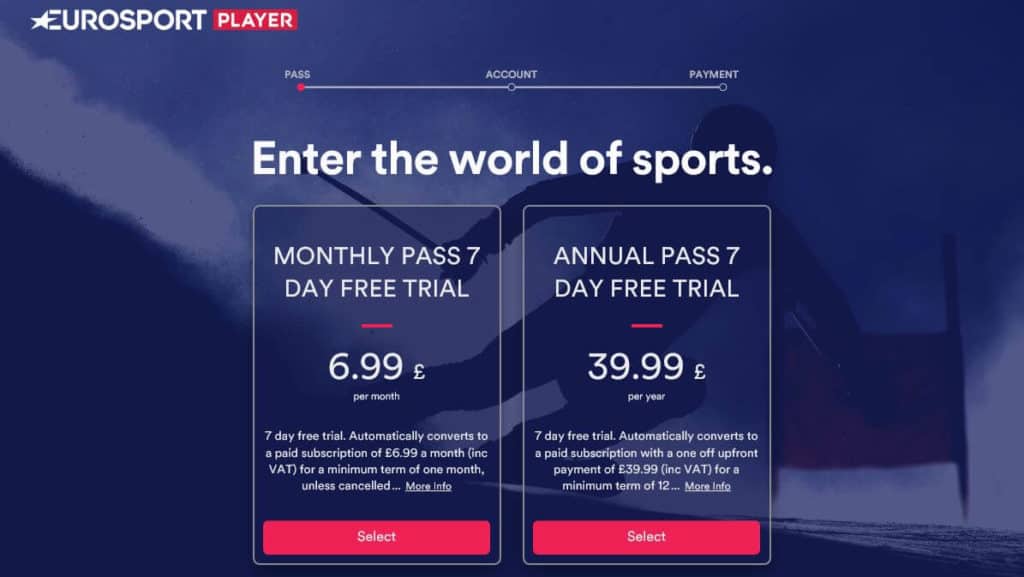 Other countries have different prices and plans available, such as France, where prices are much higher (using current GBP / EUR rates) but you can pay for an annual pass in monthly installments. 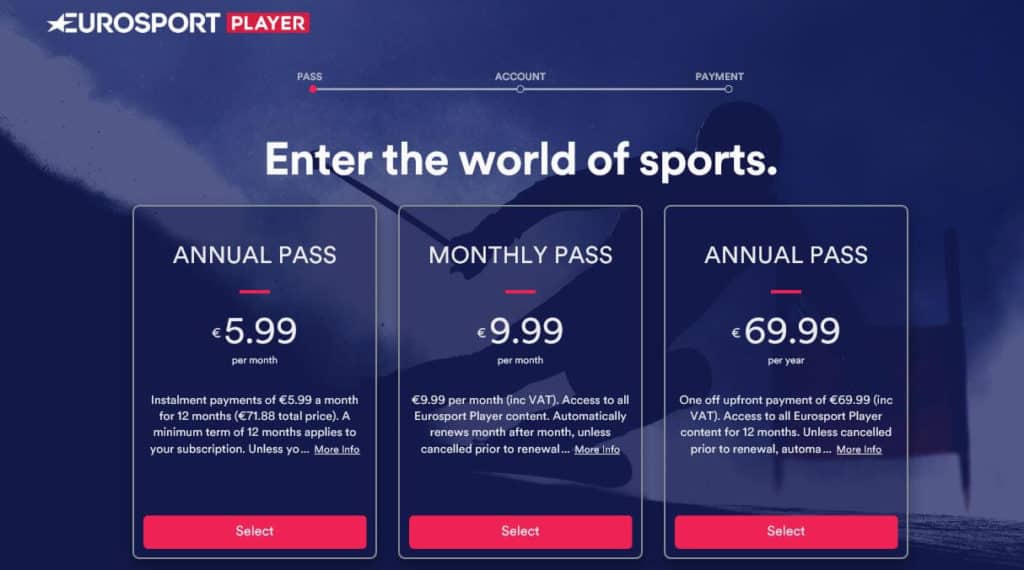 The one problem is, you’ll need to sign up using a European address. If you try to use a non-European address, you’ll get an error: “We encountered a problem processing your order.”

This won’t be an issue for residents of Europe who are simply watching while abroad, but it will pose a problem for those who do not have a European billing address. One way around this might be to use a virtual credit card such as those available from Entropay.

Eurosport has rights to a vast number of Europe’s top sporting events ,as well as many outside of Europe.

Here’s just a taste of what it has to offer: