How to watch Univision online abroad (outside US) with a VPN

Unable to watch Univision? That’s because it’s only available in the US. We’ll explain how you can live stream Univision from abroad using a Virtual Private Network (VPN).
Mark Gill TECH JOURNALIST, VPN AND PRIVACY SPECIALIST 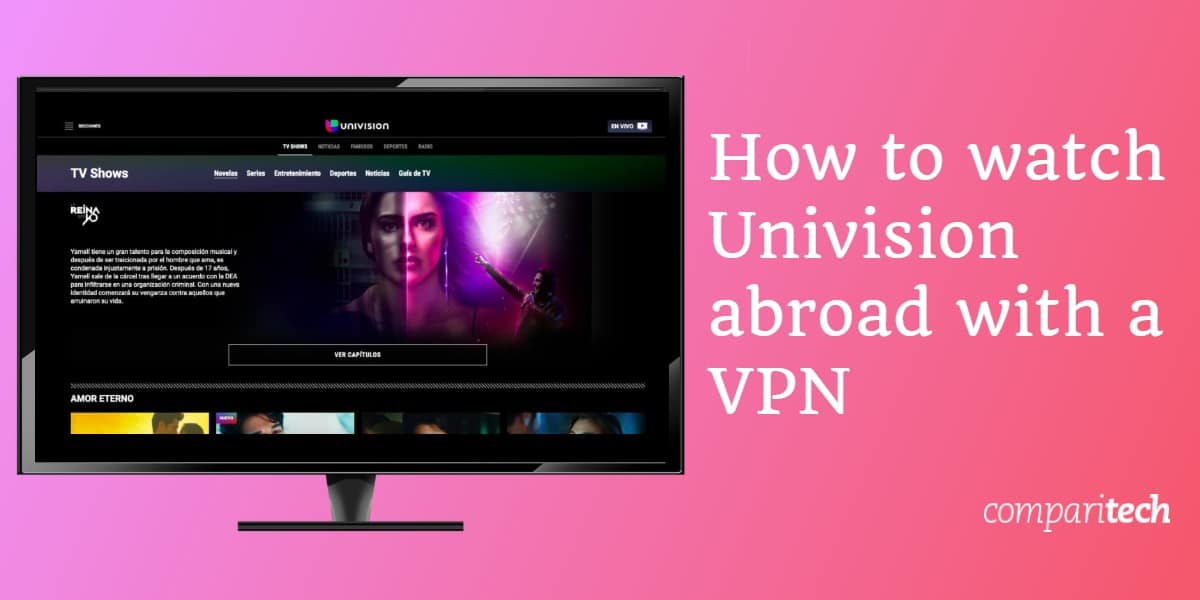 If you’re struggling to watch Univision abroad, you’re not alone. This American Spanish-language network is region-locked and only available in the United States. Try to watch an episode outside of the US and you’ll come across the following message:

This roughly translates as “Sorry, this content is not available in your country”. 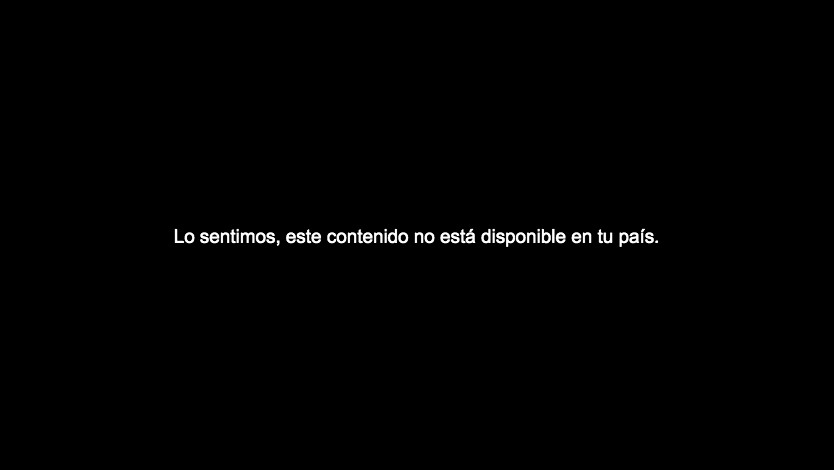 Fortunately, you can watch Univision abroad with the help of VPN. Short for Virtual Private Network, a VPN encrypts your internet traffic, routing it to one of its servers. By connecting to a server in the US, you’ll receive a US IP address, allowing you to unblock the likes of Univision as if located in the country.

How to watch Univision from anywhere with a VPN

You could be watching Univision outside the US in a matter of minutes. We’ve made things simple by explaining what you’ll need to do, step-by-step, below.

Here’s how to watch Univision from anywhere:

If you’re not sure where to begin in terms of finding a VPN, we’ve got you covered. We’ve selected the best VPNs for Univision based on their meeting the following criteria:

Don’t have time to read the full article just yet? Here’s a quick summary of the best VPNs for Univision:

Here’s our list of the best VPNs for watching Univision outside the US:

NordVPN is great for unblocking region-locked US content thanks to its network of over 1,800 servers in the United States. With servers across 19 US cities, you have your pick of locations for the best possible connection speed. Better still, NordVPN offers a variety of specialty servers. For instance, double VPN servers offer you extra security while dedicated IP servers allow you to bypass blacklists. Aside from working well with Univision, NordVPN unblocks Netflix, Amazon Prime Video, and HBO Go, among other popular streaming services.

If you have lots of devices, you’ll be happy to hear that you can protect up to six devices simultaneously with this VPN. NordVPN is an easy service to use, offering beginner-friendly apps and browser extensions as well as 24/7 support. This VPN is headquartered in Panama where it isn’t subject to mandatory data retention laws. What’s more, it’s a no-logs service that uses 256-bit AES encryption, protection from DNS and IPv6 leaks, and a kill switch. to keep your data secure.

You can use NordVPN via the apps for Windows, Mac, Linux, Android, iOS, and Android TV. Chrome and Firefox browser extensions are also available to download. Manual installation is required for use with routers.

BEST VPN FOR UNIVISION:NordVPN is our top choice because of its high speeds and impressive network of 1,900 US servers. Watch Univision and Netflix abroad. Connect up to six devices simultaneously. Includes 24/7 live chat support and a strict no-logs policy. Try it risk-free thanks to its 30-day money-back guarantee.

NordVPN Coupon
SAVE 72% on the 2-year plan

Surfshark has servers in over two dozen US cities — far more than most VPNs on the market. This means it’s easy to find a high-speed, low-latency server that suits your needs. This VPN is able to unblock Univision as well as the likes of Netflix and Amazon Prime Video. What’s particularly noteworthy about Surfshark is that it allows you to connect an unlimited number of devices simultaneously.

This VPN includes many useful features. For example, it blocks ads, trackers, and malware, plus it lets users choose which websites and apps can bypass the VPN. Surfshark offers strong security and privacy protections with its strict no-logs policy, 256-bit AES encryption, DNS leak protection, and a kill switch. You can even choose to pay in cryptocurrency for added privacy.

Surfshark apps are available for Windows, Mac, Android, iOS, Linux, and Amazon Fire TV/Fire Stick. You can also use browser extensions for Chrome and Firefox. Select routers can be configured manually.

BEST BUDGET OPTION:Surfshark lets you connect an unlimited number of devices simultaneously. Use it to watch Univision abroad without breaking the bank. Also unblocks Netflix. Very easy to use thanks to user-friendly apps. There’s even a 30-day money-back guarantee.

Surfshark Coupon
Get 3 Months FREE with a 2-year plan

ExpressVPN has servers in over a dozen US cities including Chicago, Los Angeles, and New York, making it easy to unblock Univision from anywhere. Additionally, this service can unblock other popular US streaming services including Netflix, Amazon Prime Video, and Hulu. With unlimited bandwidth and a wide network spanning 94 countries, ExpressVPN is an excellent choice for anyone looking to torrent or stream safely.

This VPN has plenty of attractive features including 24/7 live chat support, split tunneling, and the option to secure up to five devices simultaneously. Those new to VPNs will appreciate how easy ExpressVPN’s apps are to use. This service has excellent security; your data is protected with 256-bit AES encryption, DNS and IPv6 leak protection, and a kill switch. Just as important, ExpressVPN doesn’t log any personally identifiable information. What’s more, it even lets you pay in Bitcoin for greater privacy.

Signing up with ExpressVPN means you can download its apps for Windows, Mac, Linux, Android, and iOS. You’ll also find Chrome and Firefox browser extensions, as well as custom firmware for routers.

GREAT EVERYDAY VPN:ExpressVPN can handle almost anything thanks to its fast and reliable servers. Unblocks Univision, Netflix, and Amazon Prime Video. Highly secure with powerful encryption. 24/7 support. Comes with a 30-day money-back guarantee.

ExpressVPN Coupon
SAVE: 49% plus 3 months Free!

CyberGhost has approximately 6,800 servers, some 1,100 of which are in the US. What makes this VPN stand out from many of its rivals are its impressive speeds. With unlimited bandwidth and the ability to unblock major platforms like Univision and Netflix US, CyberGhost is ideal for those looking to stream frequently. You can even use CyberGhost on up to seven devices at once – more simultaneous connections than most VPNs allow.

This VPN is user-friendly but provides 24/7 support over email and live chat all the same. It uses 256-bit AES encryption, DNS and IPv6 leak protection, and an automatic kill switch to keep your activities private at all times. CyberGhost doesn’t keep any logs and publishes an annual transparency report, revealing details such as how many legal requests it receives.

CyberGhost apps are available for Windows, Mac, Android, Linux, iOS, Amazon Fire Stick/Fire TV, and Android TV. You can also use browser extensions for Chrome and Firefox. Manual configuration is needed for use with supported routers.

PROTECTS YOUR PRIVACY:CyberGhost offers excellent security with encryption and a strict no-logs policy. Use it to watch Univision outside the US. Also unblocks Netflix US. Beginner-friendly apps and 24/7 support. Up to seven simultaneous connections. 45-day money-back guarantee.

IPVanish stands out by allowing each user to connect as many devices as they like. For this reason, it’s a great VPN to share with family. Further, with servers in dozens of countries (and 19 US cities), IPVanish makes it easy to unblock sites and services from all over the world. This service allows a high level of user freedom. For instance, there’s no limit on how many times you can switch servers, and no need to worry about bandwidth throttling.

IPVanish takes the security of its users seriously, as evidenced by its strict no-logs policy and use of 256-bit AES encryption. Once connected, you’re also protected from data leaks thanks to this service’s kill switch and DNS and IPv6 leak protection. 24/7 support is available via live chat in case of any issues.

IPVanish provides apps for Windows, Mac, Android, iOS, and Amazon Fire TV/Fire Stick. It can be manually configured for use with Linux systems and routers.

UNLIMITED CONNECTIONS:IPVanish has hundreds of US servers for unblocking Univision. Offers good speeds for streaming and 24/7 live chat support. Can be used on any number of devices simultaneously. Security features include encryption and a no-logs policy. 30-day money-back guarantee.

IPVanish Coupon
SAVE 73% on the two-year plan

PrivateVPN lets you stream Univision without being interrupted by frequent buffering or lag. That’s because it has hundreds of high-speed servers and offers unlimited bandwidth. Its US servers are located across cities including Los Angeles and New York. Aside from allowing you to watch Univision outside the US, PrivateVPN is able to unblock platforms like Netflix and Hulu among others. This VPN permits up to six simultaneous connections.

This VPN’s apps are simple and intuitive, making it as easy as possible to get connected. You even have the option of simple and advanced menus based on your needs. Support is available over live chat 24 hours a day, and remote help is available, should you need it. Most importantly, PrivateVPN includes strong security features including 256-bit AES encryption, a kill switch, and DNS leak protection. PrivateVPN states that it has a zero-data logging policy.

It’s possible to use PrivateVPN with the following operating systems: Windows, Mac, Android, and iOS. Manual installation is required for Linux and routers.

Can I use a free VPN to watch Univision?

Many people have a similar experience when it comes to using free VPNs. For the most part, you can expect slow browsing speeds and even slower streaming. What’s worse, free VPNs are terrible at unblocking geo-restricted content, be it on Univision, Netflix, or DAZN. While it’s possible to use a free VPN to watch Univision, the reality is that many such services won’t work or will perform so poorly that they aren’t worth your time.

It’s also worth knowing some of the risks that come with using free VPNs. Very few services are truly free and some free VPNs make their money by spamming you with ads or selling your browsing history. Just as discouraging is the fact that many free VPNs simply lack the security to keep you safe online. In contrast, the best VPNs use encryption to keep your data secure and protect your privacy with a strict no-logs policy.

What can I watch on Univision?

Univision programming largely consists of TV series, particularly telenovelas. However, the network also operates a news division as well as sports, children’s programming and specials. Here are a few examples of some of the content you can watch on Univision:

What’s the difference between Univision and Univision NOW?

The Univision network’s main website is Univision.com. This offers a range of news and sports coverage as well as full episodes of TV shows. In 2015, Univision launched Univision NOW, an over-the-top streaming service featuring content (TV shows and movies) from Univision and UniMás.

Unable to watch Univision? That’s because it’s only available in the US. We’ll explain how you can live stream Univision from anywhere (even abroad) using a Virtual Private Network (VPN).

In which countries is Univision available?

Univision is available in the following countries (note that programming varies from country to country):