How to get American Netflix in Norway with a VPN

Looking to stream American Netflix from Norway? In this post, we’ll let you know what’s available on American Netflix and explain how to watch Netflix USA in Norway with a Virtual Private Network (VPN).
Ian Garland Streaming, Kodi and VPN Expert 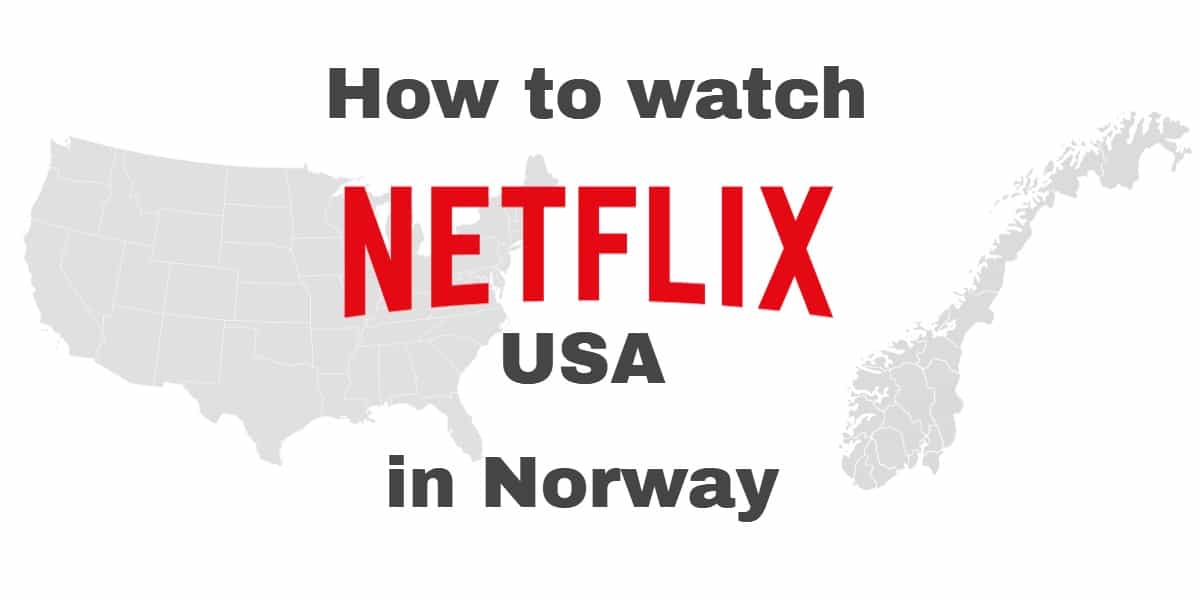 Netflix is available almost everywhere in the world, but the library of content changes based on the country you’re in. However, there is a way to bypass these restrictions and access another region’s Netflix library from abroad. Whenever you connect to a VPN, you’re given a temporary IP address from the country your chosen server is in. As such, when you connect to an American server, Netflix will think you’re in the US and allow you to browse the American library.

VPNs are good for more than just unblocking streaming sites. They also encrypt your network traffic, preventing your employer, Internet Service Provider (ISP), or government from monitoring your activities. Additionally, since your data is being routed through servers in another country, VPNs easily bypass country-wide blocking, allowing you to visit sites that are usually inaccessible from your current location.

We’ll be covering each of our recommended VPNs in more detail below However, if you’re in a rush, you might want to read a brief summary of the best VPNs for streaming Netflix US in Norway instead:

How to watch American Netflix in Norway with a VPN

With the right VPN, it’s easy to use region-locked streaming services abroad. Follow the steps below to unblock Netflix US from Norway or anywhere else:

Although there are a myriad of VPNs out there, choosing one doesn’t have to be difficult. Instead of searching for a VPN that’s able to unblock American Netflix in Norway, we recommend using a secure, well-rounded VPN so that you’re covered whatever you choose to do online. You’ll find the criteria we used to find the best VPNs for Netflix US in Norway below:

Best VPNs for Netflix US in Norway

Read on to find our reviews of the best VPNs for streaming Netflix US in Norway:

ExpressVPN has over 3,000 high-speed servers in 94 countries around the world. This service allows up to three simultaneous connections and doesn’t throttle its users’ bandwidth, so it’s great for streaming. Also, ExpressVPN even reliably unblocks stubborn services like Amazon Prime Video, Hulu, BBC iPlayer, and Netflix US abroad.

This VPN takes your online security seriously. It secures your data with 256-bit AES encryption, a kill switch which automatically stops all traffic when you lose your connection suddenly, and protection against IPv6 and DNS leaks. ExpressVPN doesn’t log any data which could identify you, but if you’d like another layer of anonymity, you can pay with Bitcoin and use a throwaway email address. Need help? You can reach customer support 24/7 over live chat.

ExpressVPN apps are available for Windows, MacOS, Linux, iOS, and Android devices. There’s also custom firmware to make installing it on a router as simple as possible.

BEST VPN FOR NETFLIX US:ExpressVPN is our top choice for Netflix US in Norway. It boasts strong security features, fast servers, and the ability to unblock some of the most popular streaming services abroad. It also comes with a risk-free 30-day money-back guarantee.

Take a look at the complete ExpressVPN review.

NordVPN has the largest network of any major VPN, with over 5,000 in total and 1,600+ in the US alone. It also offers consistently high speeds and better-than-average unblocking, making it ideal for watching American Netflix abroad. Better still, with unlimited bandwidth and up to six simultaneous connections permitted, you can stream wherever you are, without any noticeable lag or buffering.

Few services have as many security features as NordVPN. For instance, there’s 256-bit encryption, an ad-blocker, a malware-scanner, a customizable kill switch, DNS, WebRTC, and IPv6 leak protection, and specialized servers for use in countries with strict digital censorship. NordVPN doesn’t keep any logs whatsoever, so there’s no chance of your activities being traced back to you. Live-chat support is available 24/7.

NordVPN has Windows, Linux, MacOS, Android, and iOS apps. Manual configuration is required for use with network routers.

BEST BUDGET VPN:NordVPN is a versatile service with a very attractive price tag. It has over 5,000 high-speed servers, excellent unblocking ability, and several powerful security features. It includes a 30-day money-back guarantee.

CyberGhost is popular with novices thanks to its versatility and ease of use. This VPN has over 4,500 servers in 60 countries, around 1,000 of which are in the US. Further, it provides reliable, high-speed connections, one-click unblocking for popular services like Netflix US, and unlimited bandwidth, meaning it’s a strong choice for everyday usage. CyberGhost allows up to seven connections at once.

This VPN requires very little configuration as its security features are all enabled by default. These include 256-bit encryption, an ad-blocker, a malware-scanner, a kill switch (in every version of the software), automatic wifi protection, and DNS and IPv6 leak protection. Further, this service doesn’t log any personally identifiable information. Despite being very user-friendly, CyberGhost provides 24/7 support via live chat.

CyberGhost has apps for MacOS, iOS, Windows, and Android. This VPN works with Linux-based systems and internet routers via manual configuration.

COMPREHENSIVE SECURITY:CyberGhost has pre-configured security features and a network of over 4,500 high-speed servers in 59 countries. It allows you to unblock services like Netflix USA from Norway in a single click. This VPN has a 45-day money-back guarantee.

PrivateVPN doesn’t have as large a network as some other services (with around 150 servers in 60 countries), but it does offer faster speeds and unlimited bandwidth. Further, PrivateVPN unblocks more Netflix catalogs than any other VPN we tested. With up to six simultaneous connections allowed, you’re free to stream whatever you like, whether you’re at home or on the go.

This service keeps your activities private at all times with 256-bit encryption, a kill switch, protection against DNS and IPv6 leaks, and strict adherence to a no-logs policy. Users have the option to pay with Bitcoin for added anonymity. Support is available via live chat between 3 PM–1 PM PST, and staff can even remotely install the software for you if you’d like.

PrivateVPN provides iOS, Android, MacOS, and Windows apps. It can be manually installed on Linux systems and home routers too.

UNBLOCK NETFLIX ANYWHERE:PrivateVPN is faster than most, and unblocks more than a dozen Netflix libraries abroad. It also boasts a strong commitment to your online security and privacy. This service comes with a 30-day money-back guarantee.

Check out our full review of PrivateVPN.

Surfshark provides fast speeds, unlimited bandwidth, and access to 800+ servers in 50 countries. Additionally, it’s capable of unblocking popular streaming services like Netflix US, Amazon Prime Video, and Hulu abroad, and as this VPN has no connection limit, you can browse and stream safely on every device you own.

This service ensures your privacy with 256-bit encryption, a kill switch (on all platforms), and protection against DNS, WebRTC, and IPv6 leaks. You can sign up anonymously using Bitcoin and a disposable email address but as Surfshark has a no-logging policy, you can’t be tracked either way. The customer support team is on hand 24/7 over live chat in case you need any assistance.

Surfshark offers apps for Windows, Android, MacOS, iOS, and Amazon Fire. It must be manually installed on Linux-based platforms and wireless routers.

UNLIMITED CONNECTIONS:Surfshark has no connection limit, strong security, fast speeds, and excellent unblocking ability, meaning you can safely stream American Netflix wherever you are, and on whichever device you like. A 30-day money-back guarantee is included.

Can I stream Netflix USA in Norway using a free VPN?

You might be tempted to use a free VPN to watch Netflix USA abroad, but we advise against it. To begin with, these services tend to have too many users for their (often very limited) networks to support. This leads to major network slowdowns, which manifest as lengthy periods of buffering whenever you try to stream. Additionally, free VPNs are usually the first to be blocked by popular streaming services, so there’s no guarantee you’ll even be able to unblock Netflix US in the first place.

Unfortunately, there are people looking to take advantage of your desire to stay safe online. One recent study examined over 280 free VPNs and found that almost 40% contained malware. Further, 18% used no encryption, meaning their users are no safer than when browsing without a VPN. These problems aren’t limited to smaller companies, though: we’ve even seen major providers like Hola make money from selling its users’ bandwidth to help run a botnet.

Using a well-established VPN with a history of standing up for its users’ privacy is the best way to stay safe online.

What else can I use a VPN for in Norway?

The Norwegian government doesn’t block many kinds of online content, but like many other countries, it has ordered local ISPs to restrict access to file-sharing sites like The Pirate Bay. However, these blocks are widely considered ineffective as they can be bypassed simply by connecting to a VPN server in another country.

Have you ever tried to log in to your online banking service abroad? Usually, these systems can’t tell the difference between a hijacking attempt and a user who’s on vacation, so they automatically lock the account down until you’re able to verify your identity. If you connect to a server in your home country before logging in, you can avoid this kind of automated security feature and use your accounts as normal, wherever you are.

Public wifi is convenient, especially if you’re in a foreign country. Despite how popular these networks are, they’re rarely secured as well as they should be, which makes them an attractive target for hackers. Additionally, the hotspot owner may be monitoring network activity. When you use a VPN, your traffic is encrypted and completely unreadable to anyone looking in from the outside.

What can I watch on Netflix US?

Netflix USA has around 6,000 titles to choose from, so there’s sure to be something you want to watch. Below, we’ll list a few of the most popular shows available on American Netflix right now:

Related: How to change Netflix country