How to watch DC Titans season 2 online from anywhere

Want to watch Titans season 2 online? We’ll explain which networks are broadcasting this show, what to expect from the upcoming season, and how you can watch Titans Season 2 from anywhere using a Virtual Private Network (VPN).
Ian Garland Streaming, Kodi and VPN Expert 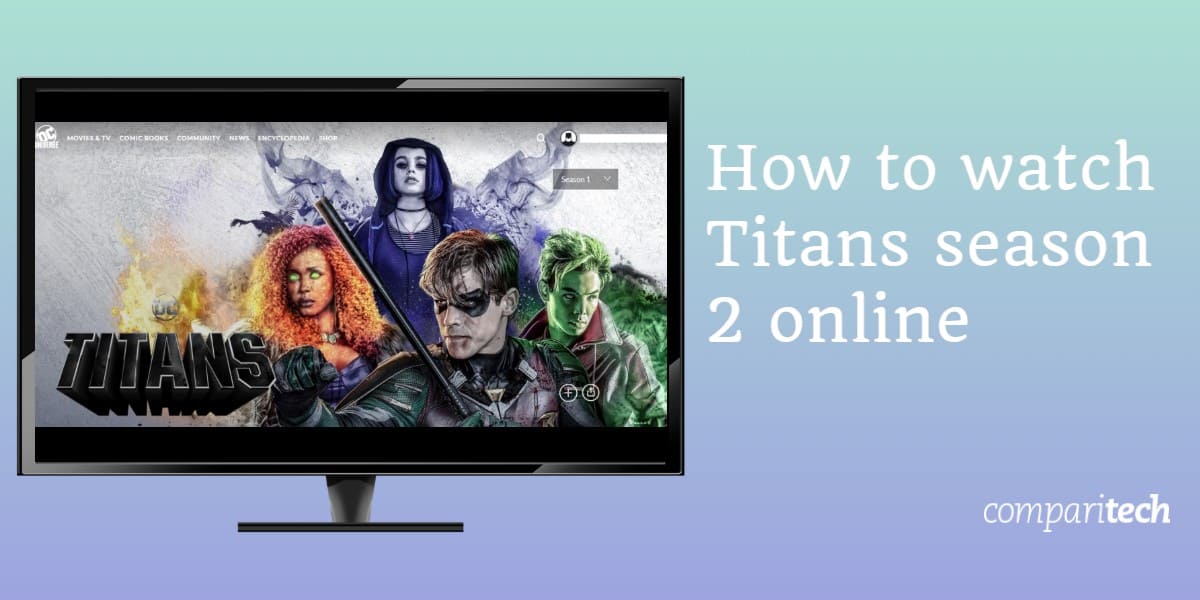 Titans season 2 will premiere on Friday September 6 on DC Universe. The first season consisted of 11 episodes, so assuming DC sticks to a weekly schedule, we can expect season 2 to finish on November 15. Read on to find out how to watch Titans Season 2 online, and don’t worry if you’re outside of the US, since we’ll also explain how to watch from abroad.

It’s important to note that we’ll only be recommending official sources. Titans is one of DC’s most-popular shows, and accordingly, will likely be available on shady streaming sites. However, we advise against using unlicensed streams. They’re often very low quality, and to make matters worse, they can be taken offline at any moment for copyright violation. With official broadcasters in several countries, there’s no need to resort to unreliable third-party streams.

Titans will only be shown on region-locked platforms, so if you live in an unsupported country, you’ll need a VPN to watch.

How to watch Titans season 2 abroad using a VPN

Unblocking and streaming Titans abroad is actually quite simple with the right VPN. Below, we’ll walk you through the process step-by-step.

Here’s how to watch Titans season 2 from anywhere with a VPN:

How to watch Titans season 2 on US TV

Predictably, in the US, Titans Season 2 will air exclusively on DC Universe. This service costs $7.99 USD per month or $74.99 per year, plus tax. There’s a seven-day free trial, meaning you can register, watch the first season of Titans free of charge, and cancel if you decide this show isn’t for you. Unfortunately, as new episodes will be released weekly, you won’t be able to stream the entire second season for free in this way (unless you’re willing to wait until it’s finished).

While we don’t know the exact time that episodes will be uploaded, we can speculate. Episodes of other DC Universe shows like Doom Patrol and Swamp Thing went live at 6 AM PST (9 AM EST) each week, so we can reasonably assume Titans season 2 will follow the same schedule.

DC Universe is region-locked and currently only available in the US. However, you can sign up and watch Titans season 2 abroad using an American VPN server and a PayPal account. Don’t have a VPN yet? ExpressVPN offers a 30-day money-back guarantee, allowing you to try it and claim a full refund if unsatisfied.

Where else can I watch Titans season 2 online?

Netflix will be broadcasting Titans season 2 internationally, just like it did with the first series. However, there’s no official release date yet. Given that season 1 was added to international Netflix libraries three months after it premiered in the US, fans in other countries could be in for a substantial wait.

There is a silver lining, though: Netflix will release every episode at once, instead of one per week. This service has a one-month free trial meaning fans can sign up, watch both seasons of Titans online for free, and cancel before the trial ends to avoid being charged.

So which countries will be able to watch Titans season 2 on Netflix? Currently, season 1 is included in over a dozen regional libraries including Netflix UK, Canada, France, Japan, Australia, and Mexico. In the absence of any further information, it seems likely that season 2 will be added to these libraries as well.

If your home Netflix library doesn’t include Titans, you can use a VPN to access one that does.

What to expect from Titans season 2

The trailer for season 2 is a couple of minutes long but has a few hints as to what we can expect to see. The show’s signature fight scenes make a return, but there’s also more interpersonal drama, most notably between Dick Grayson and Jason Todd. Despite having destroyed his Robin suit in season 1, circumstances look set to force Grayson’s return to the role.

Of course, there are two main reveals in this trailer. The first is that Iain Glen (Jorah from Game of Thrones) will be playing Bruce Wayne. The second is that notorious DC villain Deathstroke (last seen in 2016’s Suicide Squad) will be making an appearance. Without going into spoiler territory, this character has significant ties to Robin, and fans have a wild ride ahead.