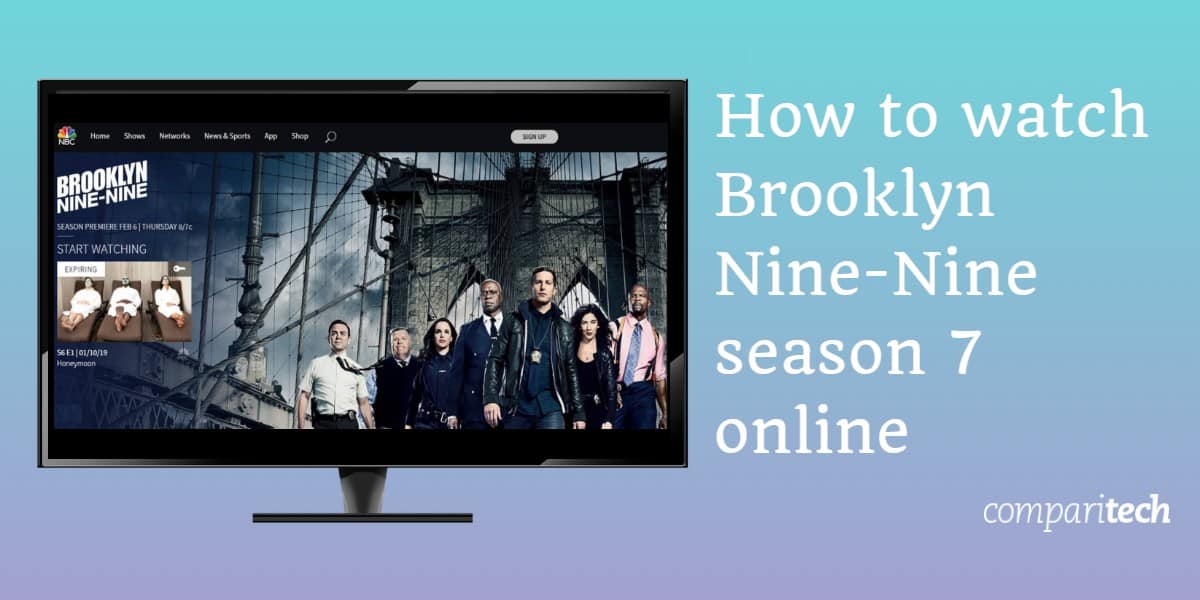 Season 7 of Brooklyn Nine-Nine will premiere on February 6 at 8 PM EST (5 PM PST / 1 AM GMT). Better yet, the new series will begin with two episodes being released back-to-back, before reverting to its traditional one-per-week schedule. Out of the country at the moment? Don’t panic; we’re about to explain how you can live stream Brooklyn Nine-Nine on your usual streaming services, even if you’re abroad.

We only recommend using official sources for Brooklyn Nine-Nine. This is an exceptionally popular show, which means that third-party streams are all but inevitable, however, we advise against their use. Not only do such streams often have laggy, low-resolution video, but they’re usually taken down quite quickly too. With several legitimate ways to watch Brooklyn Nine-Nine online (many of them free), there’s no benefit to watching shady unlicensed streams.

Brooklyn Nine-Nine season 7 will be broadcast exclusively on geo-restricted streaming platforms. As such, if you’re traveling abroad and would prefer to watch on your usual services, you’ll need a Virtual Private Network (VPN).

How to watch Brooklyn Nine-Nine online abroad with a VPN

Most streaming services are region-locked, meaning they only work in certain countries. However, by connecting to a VPN, you can spoof your location and access your usual services from anywhere.

Here’s how to watch Brooklyn Nine-Nine season 7 online from anywhere:

New episodes of Brooklyn Nine-Nine will air live. For this reason, we recommend spending a couple of minutes making sure your VPN works as expected ahead of time. If not, you can simply contact customer support for assistance, and won’t have to miss any of the show.

How to watch Brooklyn Nine-Nine season 7 on US TV

If you live in America, streaming Brooklyn Nine-Nine is easy. NBC will show new episodes live every Thursday night at 8 PM. If this channel is included as part of your cable TV package, you can just sign in to the website and watch the whole series at no added cost.

Looking to watch Brooklyn Nine-Nine without cable? Luckily, NBC offers plenty of other ways to sign in. Users can log in using a fuboTV, AT&T TV Now, YouTube TV, Sling TV, or Hulu with Live TV account. Although all of these services offer a free trial period, even when combined, these aren’t long enough to watch all of Brooklyn Nine-Nine season 7 for free. You can, however, watch the latest episodes on-demand without having to sign in.

All of the services above are region-locked, meaning they’re usually only available in the US. However, with a VPN, Americans who are in other countries can access their favorite services as normal. Don’t have a VPN yet? ExpressVPN includes a 30-day money-back guarantee, letting you watch Brooklyn Nine-Nine risk-free. If you’re unimpressed, you can just cancel to receive a full refund, no questions asked.

Where else can I stream Brooklyn Nine-Nine season 7 online?

Brooklyn Nine-Nine is being released in several countries outside of the US. Below, we’ll explain how to live stream season 7 wherever you are:

CityTV will show new episodes in Canada at the same time that they air in the US (8 PM EST). Now, while you can watch the live stream for free, you won’t be able to watch older episodes on-demand unless you can sign in with your cable provider details.

If you’d prefer to catch up before the new season begins, you can find series 1–6 on Netflix Canada. At present, there’s no indication as to when season 7 will arrive on the platform but if history is anything to go by, we can expect it to be sometime next year.

CityTV and Netflix Canada are both region-locked. To securely stream Brooklyn Nine-Nine on either platform while abroad on vacation, you’ll need a VPN.

Australian fans can stream Brooklyn Nine-Nine season 7 on SBS from February 7. There’ll be a new episode every Friday night at 8:30 PM AEDT, and while the SBS website doesn’t have a live stream, you can watch free of charge on Freeview. If you miss an episode, SBS will allow you to stream it on-demand shortly after it finishes airing, though you’ll have to create a free account first.

Not quite caught up yet? Netflix Australia currently offers the first six seasons of Brooklyn Nine-Nine. This service usually costs $9.99 AUD per month but it comes with a one-month free trial.

SBS, Freeview, and Netflix are all geo-restricted platforms. As such, you’ll need a VPN if you’d like to securely access them from abroad.

If you live in the UK, we have a bit of bad news: there’s no concrete information regarding season 7’s release date just yet. However, we know that season 6 will arrive on Netflix UK on March 28. Previously, new seasons have aired on E4 in March, and there’s no reason to expect anything to be different this time around. This would mean that it’d be possible to stream the entire seventh season of Brooklyn Nine-Nine for free on All 4.

Both of the platforms mentioned above are geo-restricted, but if you’re outside of the UK, you can access them as normal using a British VPN server.

The big change in season 7 is that Holt will now be going on patrol with the rest of the team, having been demoted after the events of season 6. The latest trailer hints at a buddy-cop movie feel for the series, with Holt and Peralta partnering up to track down an assassin. The other difference is that Gina is no longer around as actress Chelsea Peretti left the show last year.