Traveling abroad and finding TikTok is banned? We'll show you how to unblock TikTok from anywhere, and the best VPNs for the job.
Paul Bischoff TECH WRITER, PRIVACY ADVOCATE AND VPN EXPERT 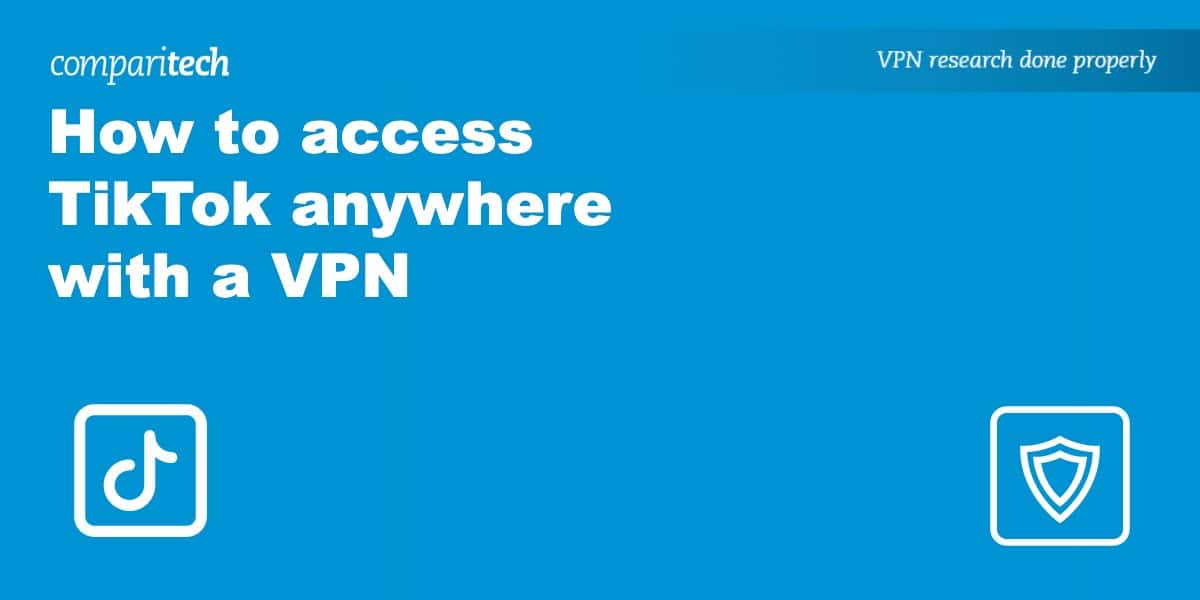 TikTok is now banned in India, and other countries, including the US, Australia, Pakistan, and Japan have considered similar bans. Despite its parent company being from China, TikTok is unavailable in the country, and a Chinese version called Douyin is used instead.

We’ve covered the potential risks to cybersecurity that TikTok users face and why some authorities are eager to ban it in a separate article, so we won’t rehash those arguments here. Instead, we’ll focus on how to access TikTok from any country with a VPN.

Short for Virtual Private Network, a VPN is a service that encrypts your internet connection and routes it through an intermediary server. This server acts as a middleman between your device and the content you want to access; in this case, TikTok. By connecting to a VPN server in another country, you can access apps, websites, and services that are otherwise unavailable in your own country.

How do I unblock TikTok with a VPN?

There are a couple of ways that a country might ban TikTok. In China, for example, internet service providers block access to TikTok servers, making the app unusable. In India, app stores are required to remove TikTok, so unblocking it means you must access another country’s version of Google Play or the Apple App Store.

Here’s how to unblock TikTok if your ISP is blocking access:

If TikTok is unavailable in your app store, see sections further down on how to change app store locations on iOS and Android.

NordVPN is offering a fully-featured risk-free 30-day trial if you sign up at this page. You can use the VPN rated #1 for TikTok with no restrictions for a full month. This is great if you wanted to keep using the service while vacationing in places like China.

Not all VPNs are equal. To unblock TikTok in India (or any other country where it’s blocked), you’ll want a VPN that meets the following criteria:

If you just want a quick VPN recommendation, here’s a summary of our top picks:

Here’s a detailed list of the best VPNs to unblock TikTok from India, China, or any other country:

NordVPN is our top recommendation. One of the fastest VPN’s we’ve tested, it’s perfect for streaming endless TikTok videos no matter where you are in the world. It even works in China. NordVPN’s strict zero-logs policy and airtight security mean your online activities are always protected. 24/7 customer support is available via live chat if you need it.

Apps are available for Windows, MacOS, iOS, Android, Amazon Fire TV, and Linux. You can connect up to six devices at once.

BUDGET CHOICE:NordVPN offers one of the best user experiences for a fraction of the price, plus it comes with a 30-day money-back guarantee.

Surfshark was made to unblock region-locked content, and TikTok is no different. With more than 3,200 servers in 60 countries, you can access a wealth of content from around the globe. Everything you do online is protected by strong encryption and a no-logs policy.

Apps are available for Windows, MacOS, iOS, Android, and Linux. There’s no connection limit, which makes it a great choice for a family or group of housemates to share.

ACCESS TIKTOK ANONYMOUSLY:Surfshark lets you stream video from TikTok and other sites safely and privately. It comes with a 30-day money-back guarantee.

With servers in 94 countries, ExpressVPN makes unblocking TikTok is easy. It’s among the fastest VPNs we’ve tested to date. Every connection is secured with the latest in VPN encryption and privacy standards, and every server is optimized for speed. Customer support is available around the clock if you run into any issues. ExpressVPN can unblock TikTok from inside mainland China.

In addition to TikTok, ExpressVPN works with a huge range of region-locked services, including popular streaming services like BBC iPlayer, Amazon Prime Video, and Hulu.

BEST VPN FOR TIKTOK:ExpressVPN lets you access TikTok from any country with ease. If you’re not satisfied, take advantage of the risk-free, 30-day, money-back guarantee.

Read our full ExpressVPN review to find out more.

CyberGhost prides itself on its ability to unblock just about anything so TikTok bans are no match for this VPN. You can choose your favorite streaming service right from the app and access it in seconds from anywhere in the world. Speeds are fast and consistent, and there’s no data cap, so you can unblock TikTok and watch videos to your heart’s content.

Security is strong, too, and CyberGhost doesn’t store any identifying user logs.

UNBLOCK TIKTOK:CyberGhost lets you access TikTok from anywhere without a hitch. It comes with a generous 45-day money-back guarantee.

IPVanish is a VPN that emphasizes privacy and security above all else. It includes the latest, strongest encryption without sacrificing speed or ease of use. Users can safely access TikTok from any country.

IPVanish allows an unlimited number of simultaneous connections on a single plan, so it’s a good option if you want to share with family or friends. It also works with a fair number of streaming sites including Netflix.

GOOD VALUE:IPVanish secures your connection and unblocks TikTok without a hassle. It comes with a 30-day money-back guarantee.

Can I unblock TikTok with a free VPN?

We don’t recommend using free VPNs. They lack the performance and security of paid VPNs, and offer far fewer locations to connect to. Many free VPNs monitor your online activity and collect personal data to sell for advertising revenue. They typically impose data caps or bandwidth limits, which can prevent you from using TikTok. This is why we recommend either making the most of free-trials or choosing a low-cost paid VPN provider with a privacy-first policy.

Choosing the best VPNs for TikTok: our methodology

Not every VPN is suitable for TikTok. For instance, some might not be fast enough to stream HD video, and others may not be able to unblock the service in countries where it’s unavailable. That’s why we thinned the list of contenders with a strict set of must-have criteria. Below, you’ll find the characteristics that all of our top VPNs for TikTok share:

If you’d like to learn more, we have a whole post detailing the different stages of our VPN testing process.

How do I change my Google Play country?

If TikTok has been removed from Google Play in your country, here's how to switch to another country's version of Google Play so you can download it:

Note that you can only change your Google Play country once per year, and you may lose access to your account balance and previous purchases.

How do I change my Apple App Store country?

If TikTok has been removed from the App Store in your country, the easiest way to get TikTok is to create a new Apple ID. This will let you choose a new country without being physically present or entering a local payment method.

Alternatively, here's how to change an existing Apple ID to a new country:

Note that you might lose your existing store credit and purchases when switching countries.

Is it safe to use TikTok?

Is it legal to access TikTok with a VPN from a country where it's banned?

It is probably not illegal to access TikTok even in countries where it's banned. Those bans typically apply to internet service providers and app stores, not individual users.

Disclaimer: we are not legal experts and every country's laws are different. Nothing we've said above should be considered legal advice. You should check your local laws before using TikTok in a banned country.

Is TikTok banned in India?

Yes, TikTok is among hundreds of popular apps banned in India due to their affiliation with China. Fortunately, using a VPN will help to bypass the ban.