Virgin Media not working with your VPN? These 6 still do.

Many popular VPNs are blocked by Virgin Media. We take a look at 6 VPNs that still work with Virgin Media so you can watch you favorite content from anywhere.
Mark Gill TECH JOURNALIST, VPN AND PRIVACY SPECIALIST 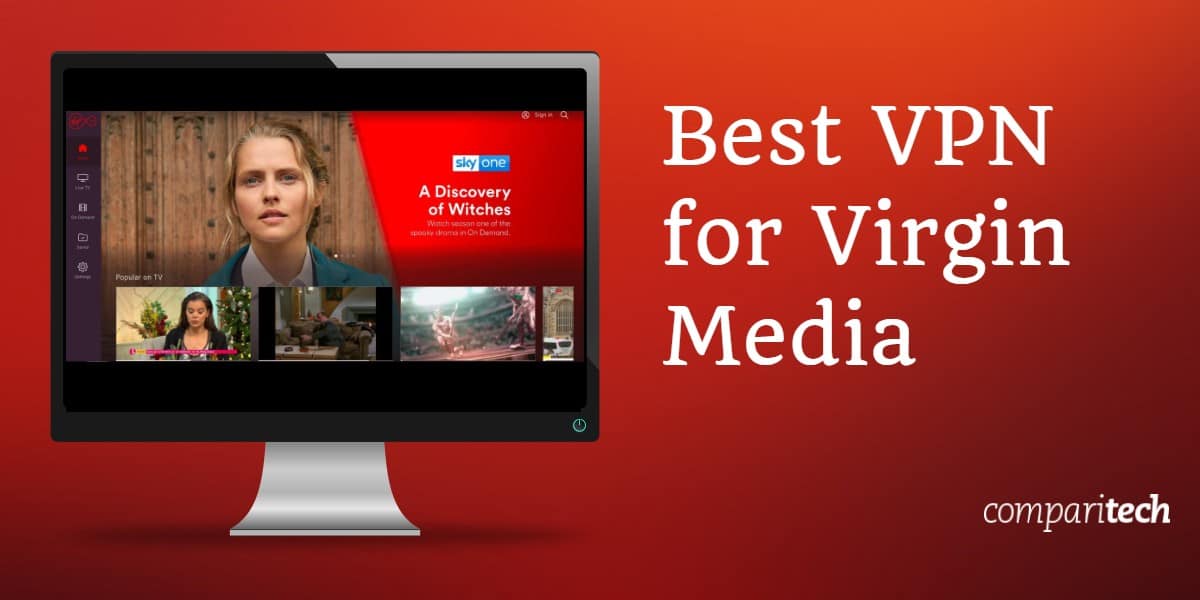 Many websites and services have geo-restrictions in place due to licensing issues, such as the Virgin Media streaming service: Virgin TV Go, Netflix and Amazon Prime Video. However, it’s worth knowing that you can download TV shows and movies on Virgin TV Go while in the UK, allowing you to watch them offline. So if you’re currently in the UK and due to go abroad, this may be an option worth considering. Your second option is finding the best VPN for Virgin Media.

If you’re outside the UK for quite some time or simply don’t want to download Virgin Media content, a VPN can help. A VPN is a “virtual private network”. It works by routing your internet traffic to another server (in this case one in the UK). This hides your IP address which, combined with additional security features such as encryption, enhances your online privacy.

Note that in order to be able to watch Virgin Media TV online on Virgin TV Go, you’ll need to be a customer of Virgin. This means signing up for Virgin TV, Virgin Broadband or both if you haven’t already.

In order to watch Virgin Media TV anywhere, you’ll need a UK IP address. You can get this by connecting to a UK server with a VPN. Many streaming sites have implemented anti-VPN measures, which means only the best-paid VPNs are able to bypass geo-restrictions. We’ve tested a lot of VPNs in order to determine the best VPN for Virgin Media so you can watch it online, outside the UK. In order to qualify, a VPN had to meet the following criteria:

Criteria for selecting the best VPN for Virgin Media

Here is our list of the 5 best Virgin Media VPNs that are still working at the time of writing:

ExpressVPN successfully unblocks Virgin Media content online as well as many other popular streaming sites including Netflix. We’ve found ExpressVPN’s performance to be among the very best thanks to the unlimited bandwidth on offer. Aside from offering very fast speeds, this is a reliable VPN, promising 99.9% uptime. ExpressVPN has more servers than most VPNs with 2,000 servers in 148 VPN server locations in 94 countries. Most of its UK servers are located in London.

Another reason why ExpressVPN is so popular is its user-friendly apps. It’s quick and easy to select a server while ExpressVPN’s Smart Location feature can automatically pick the best VPN server location for you. This is a VPN that provides more apps than most, even offering apps for Linux and routers. Browser extensions add to the convenience of using ExpressVPN. We tested the 24/7 live chat support offered by ExpressVPN and received a reply within seconds, which was impressive.

Your VPN should not only unblock Virgin TV Go outside the UK but also keep you safe. ExpressVPN certainly does this with its use of 256-bit AES encryption. Based in the British Virgin Islands, ExpressVPN isn’t subject to data retention laws and keeps no traffic logs. When you combine this with DNS leak protection, split tunneling and a kill switch feature, ExpressVPN is undoubtedly one of the most secure VPNs on the market.

BEST VPN FOR VIRGIN MEDIA:ExpressVPN is our #1 choice. Lots of high speed servers, 24/7 live chat support and a high level of security. Offers plenty of apps and browser extensions.

NordVPN leads the way when it comes to the sheer quantity of servers on offer. If you’re looking for a VPN with plenty of UK servers, NordVPN certainly ticks that box with well over 600. Overall, NordVPN has more than 2,000 servers across 62 countries. In our experience, NordVPN is excellent at bypassing geo-restrictions on streaming service websites such as Virgin TV Go, Netflix and Amazon Prime Video. What’s more, NordVPN is fast. Featuring unlimited bandwidth, streaming is smooth and uninterrupted.

You can use NordVPN on up to six devices simultaneously, allowing you to secure everything from your computer and smartphone to your router. NordVPN is one of the few VPNs to offer browser extensions, which does make using the VPN quicker and easier. The apps are also very easy to navigate. NordVPN offers excellent security features including 256-bit AES encryption, DNS leak protection and an automatic kill switch. If you’re seeking even greater security, you can choose double VPN and onion over VPN servers. Last but not least, NordVPN has a strict no logs policy, protecting your private data.

NordVPN apps can be downloaded for Windows, Mac, Android, iOS and Linux. There’s also an app for Android TV as well as browser extensions for Chrome and Firefox.

BEST BUDGET VPN:NordVPN has a huge network of servers , offers fast speeds and lets you connect up to 6 devices simultaneously.

Surfshark is ideal for streaming live TV, and not only because it unblocks popular platforms like Netflix, Amazon Prime Video, and BBC iPlayer. This service offers access to more than 1,000 servers in 60+ countries, and its connections are fast enough to watch live HD video without any noticeable lag. Best of all, there’s no connection limit, which means you can watch whatever you like, whenever you like, wherever you are.

This service comes with several powerful security features including a kill switch (in all versions), protection against IPv6, DNS, and WebRTC leaks, and 256-bit AES encryption. There’s also a NoBorders feature that lets you access the internet freely from countries with strict online censorship. Surfshark follows a strict no-logs policy and as such, your activities cannot be traced back to you. There is the option to pay in cryptocurrency for another layer of protection, though. Live chat-based support is available 24/7 in case of any issues.

Surfshark has apps for Android, iOS, Windows, Linux, and MacOS devices. It can be manually installed on supported internet routers.

PRIVACY-FIRST SERVICE:Surfshark has exceptional unblocking ability and allows as many connections as you need, but it puts your privacy first, with numerous powerful security and privacy features. As if that wasn’t enough, this service even offers a 30-day money-back guarantee.

CyberGhost has over 480 servers in the UK, most of which are located in the cities of London and Manchester. In total, CyberGhost’s network consists of more than 5,700 servers in 90 countries, which makes this VPN ideal for unblocking content worldwide. This is a VPN that offers unlimited bandwidth and traffic and is known to offer particularly fast speeds. This makes it ideal for streaming HD Virgin Media TV shows. Our testing of CyberGhost was very positive with no annoying buffering or lag to speak of.

We like the CyberGhost apps, which are easy to use and very responsive, making them suitable if you’re new to using a VPN. CyberGhost offers particularly good value since it allows simultaneous connections on up to 7 devices, which is great for families. This is one of the safer VPNs you can use since it has a wide range of security features. These include DNS and IP leak protection, a kill switch, a no logs policy and of course, 256-bit AES encryption.

Easy to use:CyberGhost has over 480 servers in the UK, offers fast Virgin Media streaming speeds and offers user-friendly apps.

IPVanish is one of the best value VPNs on the market. What we really like about this VPN is that you can have up to 10 connections at once. Aside from this, IPVanish has a good network of servers with 1,100 worldwide in 60 countries. With around 100 servers in the UK (London, Manchester, Glasgow and Nottingham), you won’t be short of options when it comes to unblocking Virgin TV Go. This is a fast and stable VPN so you’re unlikely to have any performance problems.

When it comes to the IPVanish apps, they’re all very easy to follow. You’re presented with a choice of servers by country and city, as well as the option of ‘Best Available Server’. IPVanish is one of the few VPNs to offer an app for Amazon Fire TV. You can enjoy peace of mind with the high level of security of IPVanish. It uses 256-bit AES encryption and has DNS leak protection built in while a kill switch ensures that traffic is cut should your VPN connection drop. It’s also worth knowing that IPVanish states that it keeps no traffic logs.

UP TO 10 DEVICES:Use a single IPVanish account on up to 10 devices. Offers user-friendly apps as well as fast and stable connections.

PrivateVPN has 8 servers in the UK (London and Manchester) and approximately 100 worldwide in 57 countries. While it’s not a particularly big server network, it’s the quality of servers that counts with PrivateVPN. This is one of the fastest VPNs we’ve tried thanks to the unlimited bandwidth and speed on offer. You’ll be able to stream Virgin Media TV anywhere, in high definition, with no problem. What’s more, you can use one PrivateVPN account to secure up to 6 devices simultaneously.

This is an easy VPN that is particularly user-friendly. The apps are simple to use and responsive which makes connecting to a server very quick. A stealth VPN option disguises your VPN’s traffic as regular web traffic, allowing you to bypass deep packet inspection and unblock even more content. 256-bit AES encryption, DNS leak protection and a kill switch are some of the security features. PrivateVPN states that it has a zero data logging policy and doesn’t even know what its users are doing online.

PrivateVPN apps can be downloaded for Windows, Mac, Android and iOS while Linux can be set up manually.

GREAT FOR STREAMING:PrivateVPN offers very fast speeds and can be used on up to 6 devices simultaneously. Has a zero data logging policy.

How to watch Virgin Media online abroad with a VPN

It isn’t difficult to use Virgin TV Go abroad with a VPN. Here’s what you need to do in 5 simple steps:

Can I use a free VPN with Virgin TV Go?

While you may find a free VPN that works with Virgin TV Go, we wouldn’t recommend it for a few reasons. First off, free VPNs tend to suffer from poor performance. This is understandable since they have too few servers and too many users. You’ll, therefore, experience buffering and lag when trying to use a free Virgin Media VPN outside the UK.

A good quality VPN should be able to unblock services like Virgin TV Go. However, VPNs should also provide you with improved online privacy. Unfortunately, this is not the case with many free VPNs, which spam users with inappropriate and annoying ads and infect devices with malware. What’s more, some free VPNs actually log your data and activity and sell it to third parties. Poor performance and poor privacy are the reasons why free VPNs simply aren’t worth it.

What can I watch on Virgin TV Go?

Virgin Media TV offers a wide range of live TV as well as on-demand TV shows and movies. Here are some of the channels you can watch on Virgin TV Go:

You can also use Virgin TV Go to watch the following titles on demand: