How to watch the Harry Potter Movies online from anywhere 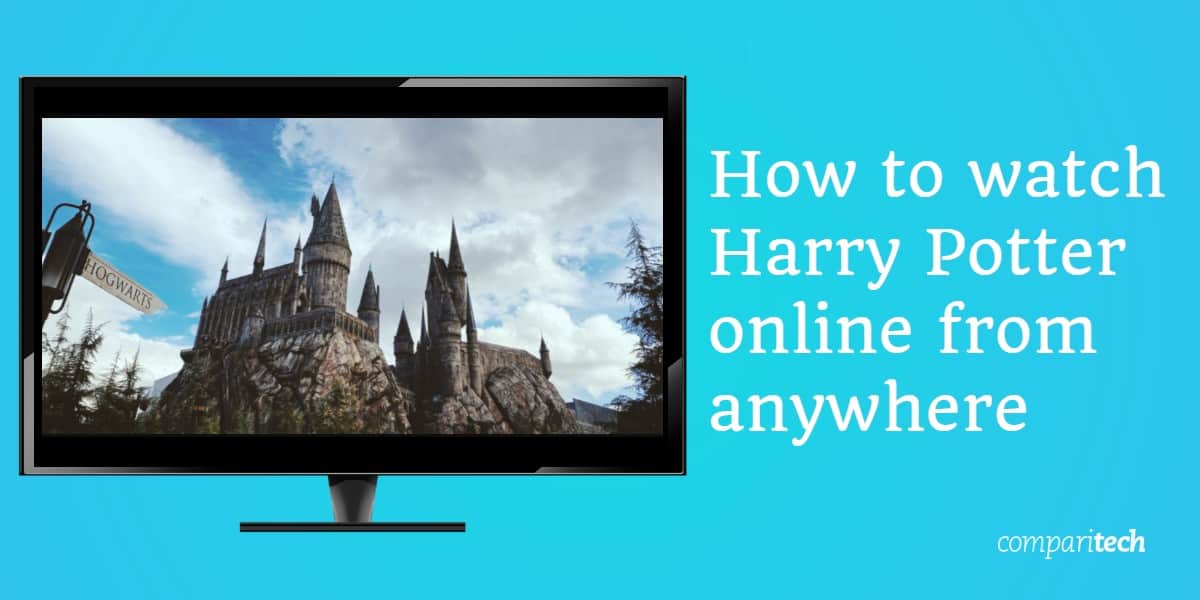 It’s important to note that we only recommend watching on official sources. These guarantee you the best possible experience, with high-resolution video and accurate, professionally-created subtitles. Also, there’s no need to worry about your stream being taken down for copyright violation. With plenty of legitimate ways to watch the Harry Potter series online (many of which offer a free trial), there’s no reason to resort to shady third-party sources.

The Harry Potter movie franchise is only on geo-restricted streaming sites. This means that if you want to watch using your usual services while traveling abroad, you’ll have to use a Virtual Private Network (VPN). A VPN spoofs your location by routing your internet traffic through a server abroad, which gives you a different IP address and makes it appear as though you are in another country. This is also useful for increasing your online security and hiding your real IP address so you can browse anonymously online. Don’t worry if this sounds complicated, it’s actually very simple and we’ll go into more detail about how to set up a VPN below.

How to watch Harry Potter movies online using a VPN

The good news is that VPNs are easier to use than you might expect. Just follow these steps to unblock and stream Harry Potter from anywhere in the world.

Here’s how to watch Harry Potter online from anywhere:

NordVPN is offering a fully-featured risk-free 30-day trial if you sign up at this page. You can use the VPN rated #1 for watching Harry Potter with no restrictions for a month—great if you want to binge the movies or are going on a trip abroad.

How to watch Harry Potter films online in the US

You can watch most of the Harry Potter movies on Sling TV. This service costs $30 USD per month and comes with a three-day free trial. If you’re just looking to stream a couple of the movies, you can cancel afterward to avoid being charged, but given the length of these films, this trial likely won’t be long enough to marathon the whole series.

Frustratingly, this service doesn’t have the second film, Harry Potter and the Chamber of Secrets. In fact, no major US streaming platform does; you’ll have to rent it from a service like Amazon Prime Video, Vudu, or Fandango. This isn’t too expensive, at around $3.99 USD, but it is a little annoying.

USA Network’s website claims that you can watch all of these movies, but this is a little misleading. The network does show them semi-regularly, but they aren’t available for on-demand viewing. If you’d like, you can sign in to the website with your cable TV details or supported over-the-top service (Sling TV, Hulu, YouTube TV, fuboTV) and watch whenever the movies are broadcast live.

The services above are all region-locked and only available in the US. If you’re currently traveling in another country, you can still access them by using an American VPN server. Don’t have a VPN yet? No problem: NordVPN comes with a 30-day money-back guarantee, which means you can try it risk-free and simply claim a refund if it fails to meet your expectations.

Where else can I stream the Harry Potter series online?

The Harry Potter franchise has fans all over the world, so it’s only natural that it’d be available for streaming in dozens of countries. Below, we explain exactly how to watch the Harry Potter movies online where you are:

If you’re a Sky TV customer, you can just sign into Sky Go and stream all eight Harry Potter films at no added cost. If not, don’t panic: there’s an easy way to watch without cable. You’ll just have to visit Now TV and sign up for a Sky Cinema pass. These cost £11.99 per month (or €15 if you’re in Ireland) and include a seven-day free trial. In other words, if you’re quick, it’s possible to sign up, watch the movies, and cancel before the trial ends.

Sky Go and Now TV can usually only be accessed in the UK and Ireland. However, those traveling abroad can use these services as normal once connected to a VPN server in either country.

It’s really quite easy to watch Harry Potter in India. Every film in the series is on Amazon Prime Video, which is included with your existing Amazon Prime subscription. Not signed up yet? Unfortunately, this service no longer offers a free trial, but at ₹129 per month or ₹999 per year, it’s not too expensive.

Currently, Amazon Prime Video India offers a choice of English or Hindi audio on every Harry Potter movie. Additionally, you can choose to use English, Hindi, Tamil, or Telugu subtitles. The first Fantastic Beasts movie is on this service too, but you’ll have to turn to Netflix (₹199 per month) to see the second.

The above services are geo-restricted, so you’ll need a VPN to watch Harry Potter on them while traveling outside of India.

Unfortunately, these films aren’t in the library of any major Australian streaming service. This means that the only way to watch them online is to rent them. Quickflix is the least expensive option at $3.99 AUD per movie, but it only lets you stream Harry Potter and the Order of the Phoenix — the others have to be mailed to you on DVD. Save yourself time and effort by paying around $4.99 per title on Fetch or Amazon Prime Video instead.

Fetch, Amazon Prime Video, and Quickflix are all geo-restricted. In other words, you’ll need a VPN to stream Harry Potter from abroad.

For a while, Netflix Canada had the full catalog of Harry Potter movies. However, this library now only includes the final four. To watch the first half of the series, Canadian fans now have to rent each film individually from services like Cineplex or ILLICO. This usually costs around $3.99 CAD per title, although prices vary slightly from one platform to another.

Cineplex and ILLICO are geo-restricted, which means you’ll have to either be in Canada or connected to a Canadian VPN server in order to access them.

There are still a few countries where you can watch every Harry Potter movie on Netflix. These are Spain, Poland, the Czech Republic, Hungary, and Portugal. Even if you don’t live in one of these countries, there’s a good chance you’ll be able to find another way to watch online. If none of your local networks allow you to stream Harry Potter films, check your regional online video rental services — it’s almost certain that they’ll carry this franchise.

How to watch Harry Potter FAQs

Can I watch Harry Potter online for free?

This really depends on where you live and how quickly you plan to watch eight movies. There are countries like the US and UK, where you can take advantage of a streaming service’s free trial to watch the movies without being charged, but for a series like Harry Potter, this approach will take some serious dedication. After all, free trials usually last a week at most, and there’s almost 20 hours of content to watch in that time.

Are the Fantastic Beasts films on Netflix?

The Fantastic Beasts spinoffs might not be quite as popular as the main series, but they still have a considerable following. Here’s a quick explainer of how to stream Fantastic Beasts films on Netflix:

Fantastic Beasts and Where to Find Them

Fantastic Beasts: The Crimes of Grindelwald

Particularly observant readers may have noticed that there are just two countries in the world where you can stream the entire Wizarding World franchise (Harry Potter and Fantastic Beasts) on Netflix: the Czech Republic and Hungary.

Which Harry Potter movie should I start with?

Generally, it’s best to watch the Harry Potter movies in release order. That is:

The Fantastic Beasts movies are spinoffs set long before the events of the main Harry Potter series, so they can be watched either before or after (although there are a handful of nods to the main series that you’ll miss if you watch Fantastic Beasts first). They do have a different vibe to Harry Potter but you won’t miss out on any crucial information if you decide not to watch, so there’s no pressure.