How to watch The Sinner season 3 online from anywhere

Would you like to watch The Sinner season 3 online? To live stream this region-locked content while traveling abroad (outside the US), you’ll need to use a Virtual Private Network (VPN). We’ll explain exactly how to watch The Sinner from anywhere.
Mark Gill TECH JOURNALIST, VPN AND PRIVACY SPECIALIST 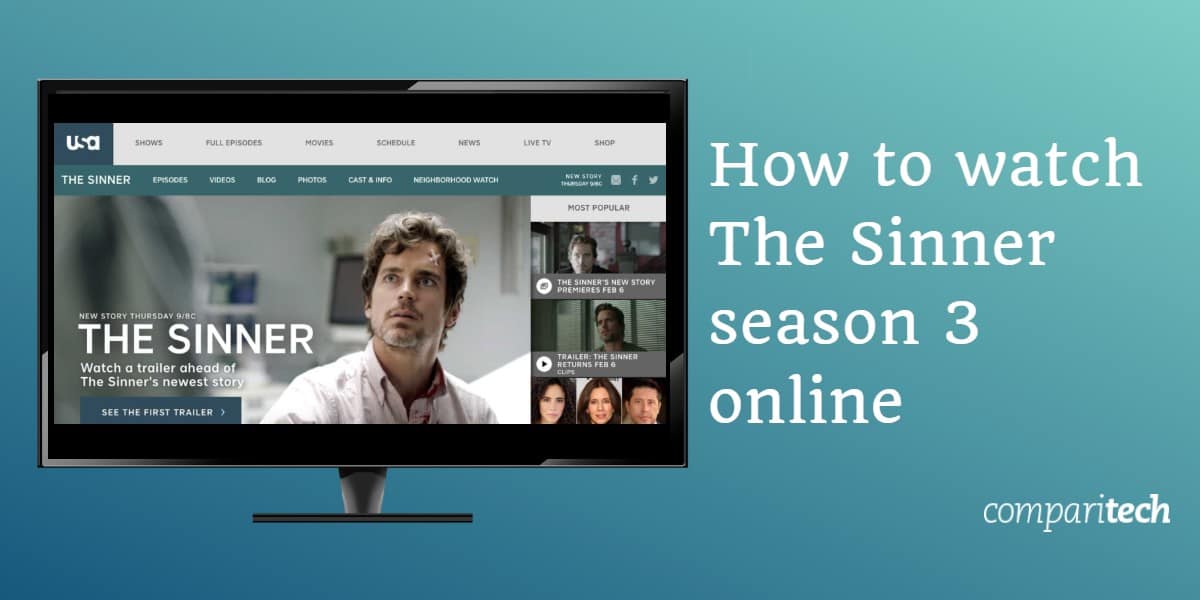 The Sinner season 3 will premiere on Thursday, February 6 at 9 PM EST (6 PM PST). There will be eight new weekly episodes to enjoy as Detective Harry Ambrose investigates a car accident in upstate New York, uncovering a sinister new case in the process. Read on to find out how you can watch The Sinner season 3 from anywhere in the world with a VPN.

In this article, we’ll only be recommending official sources for watching The Sinner season 3. One reason we don’t recommend unlicensed streams is that they may be taken offline for copyright infringement. What’s more, they’re often of inferior quality with low resolution and excessive buffering and lag. Using official sources means you don’t need to run the risk of missing out on the premiere of The Sinner season 3.

Note that The Sinner season 3 will only be shown on region-locked platforms. To continue watching your favorite streaming services abroad, you’ll need a VPN.

How to watch The Sinner season 3 online with a VPN

By connecting to a server in the US, you’ll receive an American IP address. This makes it appear as if you’re browsing the web from the US, even if you’re on the other side of the world. As such, you’ll be able to unblock geo-restricted content such as The Sinner season 3 from abroad.

Here’s how to watch The Sinner season 3 online abroad (outside of the US):

The Sinner season 3 will air live on USA Network. That’s why we recommend you test your VPN ahead of the premiere. If you have any trouble, you’ll then have plenty of time to contact the customer support of your VPN for further assistance.

How to watch The Sinner season 3 on US TV

To watch The Sinner season 3 on USA Network from outside the US, you’ll need a VPN. The reason for this is that USA Network and the rest of the above streaming services are region-locked. By connecting to a server in the US and obtaining a US IP address, you’ll be able to bypass these restrictions when traveling abroad. ExpressVPN includes a 30-day money-back guarantee which means you can try it risk-free and claim a full refund if unsatisfied.

Where else can I watch The Sinner season 3?

The Sinner season 3 will also be broadcast on Showcase in Canada. If you have a Canadian cable TV subscription, you’ll be able to watch at no extra cost. However, Showcase is also available through the StackTV addon for Amazon Prime Video Channels. This costs $12.99 CDN per month while an Amazon Prime Video subscription is also required ($7.99 monthly). In order for this to work abroad, you’ll need to connect to a VPN server in Canada for a Canadian IP address.

Where can I watch The Sinner seasons 1 and 2?

Seasons 1 and 2 are available to stream in various international Netflix libraries. As such, we can be confident that season 3 will come to Netflix in the near future — possibly later this year. Netflix US plans start from $8.99 USD a month and include a 30-day free trial.

Aside from streaming, there’s also the option to purchase individual episodes and full seasons of The Sinner on the likes of Amazon Prime, Vudu, and YouTube TV. Single episodes are typically priced between $1.99–$2.99 while a season costs $14.99 in SD and $19.99 HD. Only seasons 1 and 2 are available as yet though The Sinner season 3 will surely be available in the near future. Content on the above streaming services is geo-restricted but you can unblock it abroad (outside the US) with the help of a VPN.

What can we expect from The Sinner season 3?

Season 3 of USA Network’s anthology crime series will feature eight 45–50-minute episodes with one new episode airing each week. As in previous seasons, The Sinner’s narrative will focus on the ‘why’ of the crime rather than the ‘who’ of traditional crime shows. The new season sees Detective Harry Ambrose investigate a car accident on the outskirts of Dorchester in upstate New York. In doing so, he uncovers an entirely new and disturbing case.

Who are the cast members of The Sinner season 3?