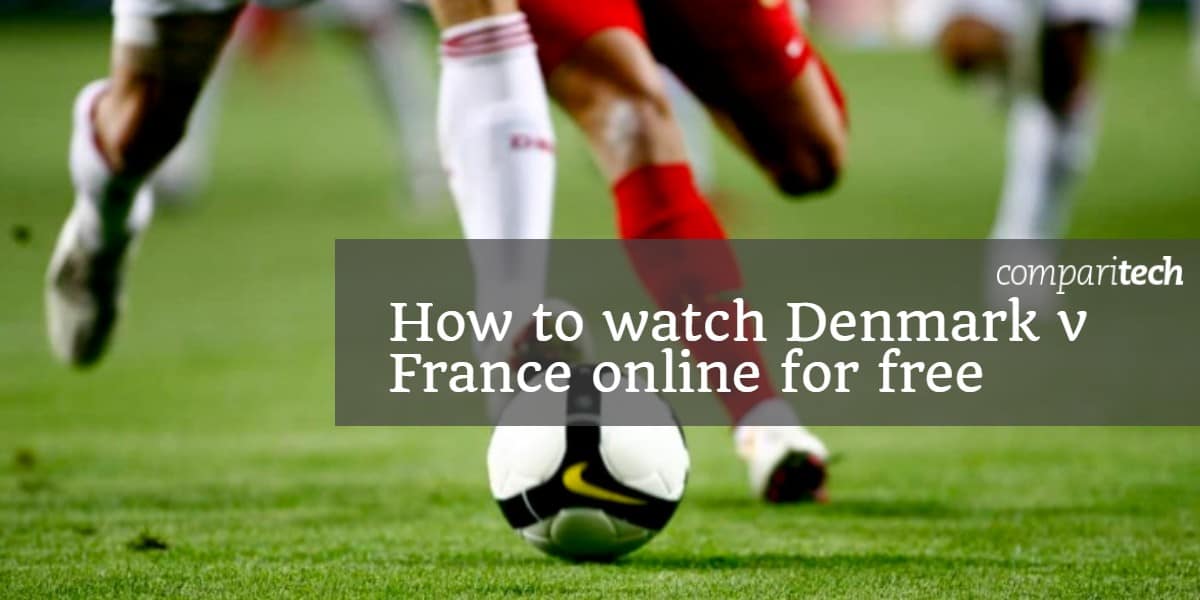 Interested in watching Denmark vs. France online? In this post, we’ll explain where you can live stream this game, and every other World Cup match, live and free of charge. What’s more, we’ll show you how a Virtual Private Network (VPN) enables you to beat geo-restrictions so you can watch on whichever streaming platform you prefer. This will unlock 2018 World Cup streams from the UK, the US, Canada, Denmark, France, and really, any country in the world.

Denmark are set to face France at Luzhniki Stadium in Moscow on June 26. The match will start at 3PM BST (7AM PST/ 10AM EST), so there’s plenty of time to find a suitable source. Both teams will progress to the knockout stage regardless of who wins, but national pride means each squad is going to try their hardest to reach the top of the table.

The good news is that the FIFA World Cup is being broadcast on TV and online by major networks in more than 120 different countries. As a result, it’s easy to find a reliable source in your native language, meaning you don’t have to miss a single moment of the action.

How to stream the 2018 World Cup live

While there are often only a handful of sources for each foreign language, English speakers have access to a far wider range. Below, you’ll find some of the official broadcasters for the major English-speaking countries:

It’s worth noting that most countries have at least one source that’s showing World Cup matches for free. However, these are usually only licensed to show a small number of games, and you might need to register for a premium service to watch every match. Try to find a service with no long-term commitments and a trial period, if possible.

The best VPN for the World Cup: ExpressVPN

We recommend streaming the 2018 World Cup with ExpressVPN. This service is fast enough for live, HD streams, and has servers in 54 different countries. It’s user-friendly, but includes a suite of security options designed to keep you and your private information safe. One great perk is that it’s one of the few remaining VPNs that can reliably bypass BBC iPlayer’s regional restrictions.

Signing up for ExpressVPN takes just a few minutes. Simply select your subscription period (one month, six months, or a year), and submit payment. There’s a 30-day money back guarantee, so you can watch the whole World Cup, and if you’re not impressed by the service, you can cancel and get your money back.

EXCLUSIVE DISCOUNT: Get three months extra for free by signing up to ExpressVPN’s one-year plan.

The 2018 FIFA World Cup broadcasting rights are shared by two networks in the UK: ITV and the BBC. Each will show half of the tournament’s games, meaning British fans can catch every single fixture for free online on either ITV Hub or BBC iPlayer. You can also watch on TVPlayer.com since this hosts live streams of ITV and BBC1.

To watch live TV in the UK, you’ll need a TV License. Of the sources above, only BBC iPlayer asks whether you have one or not, and there are no further verification measures.

The US has just one English-language World Cup broadcaster: Fox Sports. This service will be showing every game live and in HD. You can watch for free but you’ll have to be subscribed to either a cable package or one of the supported over-the-top services in the list below:

To sign up for Fox Sports, your payment method has to be registered to an American address. This means if you’re a US citizen vacationing elsewhere, you can gain access Fox Sports, but for those who reside outside of the US, this will prove almost impossible.

Fox Sports has an official Kodi addon, in case you’d prefer to watch through your home media center. Be sure to avoid third-party sports addons, though, as these tend to use unlicensed, unreliable streams. As there are so many legitimate World Cup sources, there’s nothing to be gained by resorting to unofficial streams.

Canada has three broadcasters all offering very similar World Cup coverage. CTV, RDS, and TSN will all be showing every single match, but they all ask you to log in with your cable provider’s details before you can watch anything.

If you don’t have cable, you can subscribe to TSN or RDS for $24.99 (CAD) per month. This might seem a little expensive, but it’s close to what you can expect to pay for an event pass on a sports streaming platform. You can always cancel once the World Cup has ended, if you don’t want to keep the service.

All three of these networks have their own mobile app (CTV Go, RDS GO, and TSN Go) that allows you to stay up-to-date and watch games live while away from home.

RDS will have French-language World Cup coverage, while CTV and TSN will be in English.

SBS’ The World Game site is showing 26 World Cup games, including every one the Australian team play in. The World Game is showing the Denmark vs. France match as well as every other group stage game, but if you’d like to watch the full tournament,  Australian viewers just one source: Optus Sport.

This service costs $15 (AUD) per month, but you may be able to watch for free if you have an Optus mobile or broadband plan. You can sign up for a two-week free trial, which gives you access to live streams of every game, but you’ll have to either commit or find a different source when the trial period ends.

How to watch Denmark vs. France from a competing country

DR and TV2 share the rights to show World Cup games in Denmark, similar to how BBC and ITV share in the UK. DR is showing the Denmark vs. France match, as well as every other fixture for free on June 26. TV2 requires a subscription to watch, but at 39kr, it’s reasonably priced, especially when you consider that it offers 4K streams.

TF1 is showing 28 of the World Cup’s 64 games for free, but unfortunately, this doesn’t include Denmark vs. France (although it is showing Serbia vs. Brazil the same evening). As such, the only French service streaming this match is beIN Sports Connect. Packages start at €14 but we’d recommend the €15 plan since it allows you to cancel at any time.

Canal+ is making its coverage available to various African countries including Senegal, Nigeria, Cameroon, Ghana, and Angola. There are several subscription options, but to gain access to the World Cup coverage, you’ll have to pay 10,000 FCFA per month.

2018 World Cup: How to watch from other countries

The 2018 World Cup is being broadcast the world over, in many different languages. We’ve compiled a brief rundown of free foreign-language sources below, but if your country isn’t included, you can find local sources in the official World Cup broadcasters list.

Bear in mind that free streams still employ geo-restriction measures. You’ll still have to connect to one of your VPN’s servers in the appropriate location before you can start streaming. We recommend testing your VPN before the game starts so you can identify and address any issues ahead of time.