Going on holiday? We’ll explain how to watch Eir Sport online abroad using a VPN (Virtual Private Network). This will allow you to live stream Eir Sport outside Ireland and avoid missing out on any of the action.
Mark Gill TECH JOURNALIST, VPN AND PRIVACY SPECIALIST 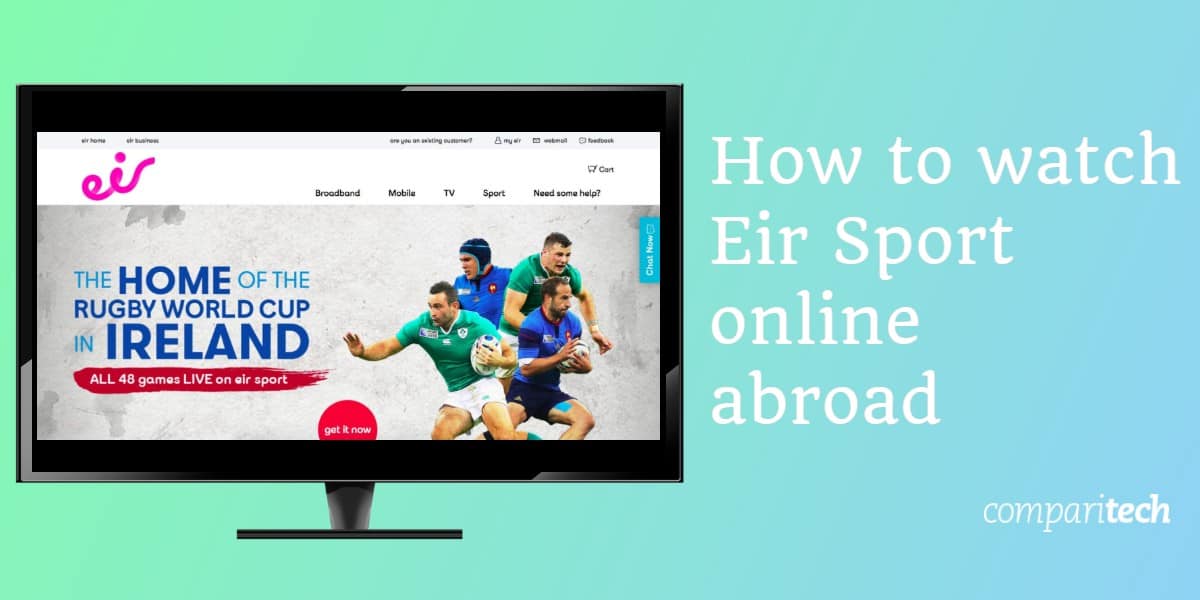 If you’ve encountered streaming errors when trying to watch Eir Sport online abroad, you’re not alone. Unfortunately, this service is geo-blocked and inaccessible outside Ireland. However, there is a way around this. By connecting to a VPN, you can obtain an Irish IP address and trick Eir Sport into thinking you’re connecting from Ireland, even when you’re traveling elsewhere.

A VPN works by routing your internet traffic through an encrypted tunnel to one of its own servers. The benefits of this are twofold: first, encryption serves to keep your data secure, protecting your privacy and anonymity in the process. Second, changing your IP address allows you to unblock geo-restricted content from anywhere in the world, including Eir Sport.

How to watch Eir Sport online abroad (outside Ireland)

Not sure where to start? You can watch Eir Sport online abroad by following these simple steps below.

Here’s how to watch Eir Sport online from anywhere with a VPN:

If you’re new to VPNs, you might find the sheer variety of options overwhelming. There are plenty of free and paid VPNs on the market. What’s more, features vary from service to service. To make things easier, we’ve only selected VPNs that meet the criteria below:

We’ll explore each of the best VPNs to watch Eir Sport outside Ireland in depth, but if you’re short on time, here’s a quick summary:

Here’s our list of the best VPNs for watching Eir Sport online abroad (outside Ireland):

ExpressVPN is your best bet for watching Eir Sport online abroad, thanks to its reliable high-speed servers. In fact, you can use this VPN to access region-locked content worldwide as it offers access to more than 3,000 servers in 94 countries. Aside from Eir Sport, ExpressVPN works well with the likes of Netflix, BBC iPlayer, Aertv, and RTÉ Player. There’s also unlimited bandwidth which means you can live stream without any noticeable lag or buffering.

This is a particularly good choice if you’re new to using a VPN. The reason for this is that the ExpressVPN apps are very simple to navigate plus 24/7 live chat support is available in case you have any difficulty. You can use this VPN to secure up to five devices simultaneously. Encryption ensures the safety of your data while there’s also DNS, IPv6, and WebRTC leak protection and a kill switch. Furthermore, ExpressVPN keeps no identifying logs of its users, allowing you to stay anonymous online.

Choosing ExpressVPN means you can access the easy-to-use apps for desktop (Windows, Mac, and Linux) and mobile (Android and iOS). Chrome and Firefox browser extensions are also available as is custom firmware for routers.

CyberGhost is a high-speed VPN service with around 20 servers in Ireland and more than 5,000 more across another 90 countries. Unlike some ISPs and free VPNs, it doesn’t throttle your connection. Instead, there’s unlimited bandwidth for uninterrupted streaming and torrenting. It’s a safe choice for watching Irish TV, be it Eir Sport, RTÉ, or TG4 while it’s also able to unblock Netflix US and Hulu.

A CyberGhost account allows up to seven simultaneous connections, meaning you can secure all of your devices. While there’s also 24/7 chat and email support, one of the highlights of CyberGhost is its range of security features. This includes 256-bit AES encryption, automatic kill switch, and protection from DNS and IPv6 leaks. What’s more, it’s a no-logs VPN headquartered in Romania — outside of the 5, 9, and 14 Eyes intelligence alliances.

You can access CyberGhost via the apps for Windows, Mac, Linux, Android, and iOS. There’s even apps for Amazon Fire Stick and Android TV. Chrome and Firefox browser extensions are also available, though routers require manual configuration.

NordVPN has one of the largest server networks of any VPN with well over 5,000 servers. Overall, it has approximately 45 servers in Ireland, some of which are optimized for P2P sharing. As such, NordVPN is certainly a convenient choice for watching Eir Sport online from abroad. With so many US servers, it’s also great for unblocking Netflix and Amazon Prime Video. It’s also worth knowing that this service lets you connect up to six devices simultaneously.

The many security features offered by NordVPN help it stand out from much of the competition. In particular, specialty Double VPN and Onion Over VPN servers provide an extra layer of protection. A strict no-logs VPN, this VPN uses 256-bit AES protection, DNS leak protection, and a kill switch to keep you safe online. NordVPN offers particularly capable customer support which can be contacted via live chat and email, 24/7.

NordVPN provides apps for the following operating systems: Windows, Mac, Android, iOS, Linux, and Android TV. You can also download Chrome and Firefox browser extensions. Manual installation is required for use with routers.

IPVanish is able to unblock Eir Sport outside Ireland thanks to its Dublin-based servers. It has a global network of servers in dozens of countries, including the US. This means that IPVanish is ideal for streaming, whether you’re looking to watch Eir Sport, Netflix, or BBC iPlayer. Streaming speeds are good which means you don’t have to worry about lag and buffering interrupting your favorite sporting events. Better still, you can have up to 10 simultaneous connections with IPVanish.

This VPN offers user-friendly apps that allow you to connect to a server in a matter of seconds. 256-bit AES encryption helps keep your data safe while you’re also protected from DNS leaks. Further security features include a kill switch and no-logs policy. Interestingly, while many VPNs choose to rent their servers, IPVanish owns its servers outright. As such, it has more control over who accesses the servers and can guarantee that no third party ever has access to your data.

Connect to servers in Ireland via the IPVanish apps for Windows, Mac, Android, iOS, and Amazon Fire TV. However, you’ll need to follow manual setup instructions for Linux and routers.

PrivateVPN is a smaller VPN service with servers in 60 countries. This includes servers in Dublin, Ireland which make it ideal for live streaming Eir Sport online from abroad. What’s particularly attractive about this VPN is that it offers excellent speeds for streaming. Indeed, its unblocking abilities allow you to access the likes of Netflix, HBO, and Hulu from anywhere. You can also share PrivateVPN with family as it allows up to six simultaneous connections per account.

While the PrivateVPN desktop and mobile apps are particularly beginner-friendly, live chat, email, and remote desktop help are all available if desired. Your data is kept private thanks to PrivateVPN’s no-logs policy. There’s also 256-bit AES encryption, DNS leak protection, and a kill switch, all of which serve to protect your online privacy. In fact, you can even pay for the service in Bitcoin in order to sign up almost completely anonymously.

Surfshark is unique in that it lets you secure an unlimited number of devices simultaneously via a single account. Furthermore, it has a growing network of over 1,000 servers in roughly 60 countries at the time of writing. Its exceptional unblocking ability means you can stream Eir Sport as well as RTÉ, BBC iPlayer, and Now TV. This service offers respectable speeds and consistent connections, both of which make for stress-free streaming and torrenting.

The Surfshark apps stand out for being particularly well-designed. In particular, they’re easy to navigate and highly responsive. A variety of specialty servers are available including P2P and MultiHop (Double VPN). There’s no shortage of security features either. Surfshark uses 256-bit AES encryption and offers DNS leak protection and a kill switch. This is a no-logs VPN that also offers a CleanWeb feature for blocking ads, trackers, and malware.

A Surfshark account includes access to apps for Windows, Linux, Mac, Android, iOS, and Amazon Fire TV. You can also use browser extensions for Chrome and Firefox. It must be manually installed on routers.

Hotspot Shield lets you unblock geo-restricted websites and services all over the world. It has a network of more than 3,000 servers in 70 countries, Ireland included. While you can use this VPN to watch Eir Sport, it also works well with RTÉ Player and BBC iPlayer. Streaming speeds are good and mean you shouldn’t have to contend with lag or buffering. Furthermore, you’ll be able to use Hotspot Shield on as many as five devices at once.

While 24/7 live chat support is available, you’re unlikely to need it too often with Hotspot Shield. The apps make things very simple and offer a one-click connection. When you use this service, you’re protected from hackers thanks to 256-bit AES encryption. There’s also DNS leak protection and a kill switch which cuts your internet traffic in the event of the VPN connection unexpectedly dropping. Hotspot Shield doesn’t keep any personally identifiable information after you disconnect.

Hotspot shield apps are available for the following: Windows, Mac, Android, and iOS. There’s also a browser extension for Chrome. Unfortunately, no support is offered for Linux or routers.

Can I use a free VPN to watch Eir Sport?

Many free VPNs are unable to unblock Eir Sport outside Ireland. Even if you find a free VPN that does work, we don’t recommend it for a number of reasons. For starters, free VPNs tend to have poor unblocking ability. So while it may work with Eir Sport, it may not work with Netflix or DAZN, for example.

Free VPNs have only a small number of servers which means you’ll be unable to unblock websites and services in many countries. Combine this with the many users and the result is heavy server load and poor performance. This is particularly problematic during live streaming when lag and buffering may make you miss out on much of the action.

Unfortunately, free VPNs suffer from more than just performance issues. Some free VPNs lack even the most basic security features such as encryption. This means your data is vulnerable to hackers, snoopers, and the like. Worse still, you may find that the free VPN you use logs your data (including your browsing history!), selling it to third parties.

Which sports events can I watch on Eir Sport?

Eir Sport offers a wide range of sporting content. As of August 2019, Virgin Media Sport was added to the Eir Sport pack. This includes every UEFA Champions League and UEFA Europa League game live. Here’s a list of some of the sports events you can watch on Eir Sport: