Looking to stream Syfy online? In this article, we’ll discuss how to unblock Syfy so you can watch it abroad (outside the US) and the best VPNs for the purpose.
Osman Husain Tech journalist, VPN and streaming expert 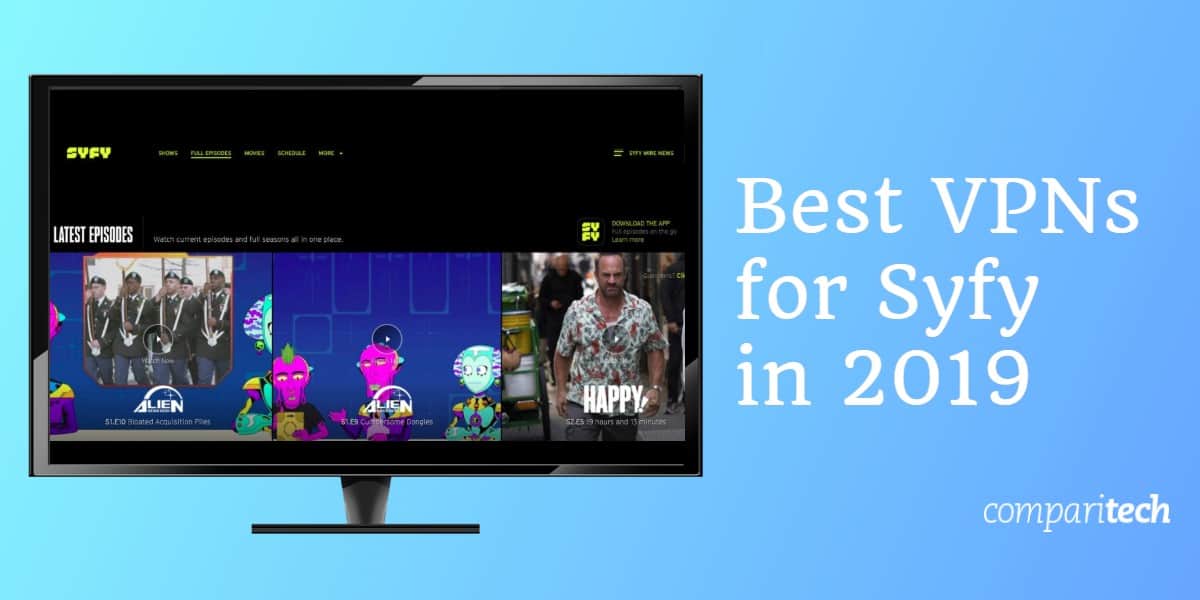 American streaming site Syfy isn’t geo-restricted per se. The only way you can log in to stream the content on the platform is if you have a subscription with a US Cable provider such as Xfinity, DirecTV, or Verizon.

Since all the compliant cable providers are US-based, you will need both a US IP address and a local subscription or you simply won’t be able to proceed further. Assuming you already have a cable subscription, the best way to overcome geo-restrictions is to use a Virtual Private Network (VPN).

A VPN will encrypt your internet connection by routing it via a server in a remote location. Encryption restricts your ISP from monitoring your digital footprint, and the server will obfuscate your real IP address, so any host sites can’t figure out where you’re located. This means you can access Syfy from Canada, the UK, Australia or any other location worldwide.

Best VPNs for watching Syfy outside the US

The top VPNs for Syfy have been recommended on the following factors:

ExpressVPN is at the top of the list due to its superior service, military-grade encryption, and ease of use.

It offers a server network of over 3,000 servers around the globe, with plentiful options in the United States. Its unblocking capabilities extend across Netflix, Hulu, BBC iPlayer, ESPN, and Fox, so you accessing Syfy should pose no issues.

There are no logs stored that could potentially identify a user. A sliver of information pertaining to popular servers and time of connection is recorded but used to improve service levels.

Apps for both Android and iOS are available, as are desktop clients for Windows and MacOS. This provider can be configured to some wifi routers and allows five devices to connect with one account.

BEST VPN FOR SYFY:ExpressVPN is our top choice for Syfy due to its robust, fast speeds and unrivaled unblocking capabilities. Try it risk-free with a 30-day money-back guarantee.

NordVPN makes use of unhackable encryption in addition to a firm no-logs policy which signify its position as an experienced player in the VPN space. It will work very well for an HD connection to stream Syfy.

With over 5,000 servers in 60 countries around the world and dozens of options in the US, NordVPN has you covered. It’s also proven to work with a host of streaming providers, including US Netflix and more. You’re also allowed to choose a server that’s specifically for your intent – HD streaming, double encryption, Tor over VPN, and more.

As we mentioned, NordVPN is known as a completely logless VPN service — the company doesn’t store any user data.

Apps for both Android and iOS are available, along with desktop clients for Windows and MacOS. A single subscription grants access to six devices at the same time.

AFFORDABLE OPTION:NordVPN is great for the budget conscious. It unblocks Syfy, Netflix, and Amazon Prime Video. Apps are easy to use and provide numerous advanced security and privacy features. Plans come with a 30-day money-back guarantee.

CyberGhost is a solid all-rounder, scoring points on both safety and speed so it should definitely occupy a place on your list. It delivers the full package with strong encryption, DNS leak protection, and an internet kill switch to ensure your connection is well-protected.

Currently this provider offers access to more than 3,500 servers in 60 countries including plentiful options in the United States. It’s able to unblock several streaming services such as Netflix, Hulu, and BBC iPlayer.

It performs very well from a video streaming perspective – with quick speeds and no logs. Plus, additional security features such as an adblocker, anti-malware defense, and anti-tracking ensure that your connection is protected at all times.

A paid subscription grants access for seven devices at the same time. You’ll find apps for both Android and iOS, along with desktop support for Windows and MacOS.

IDEAL FOR NEWCOMERS:CyberGhost is fast, intuitive, and excellent for streaming. It comes with a 45-day money-back guarantee.

IPVanish has been around for several years and offers speedy, robust connections around the globe. Its encryption capabilities are among the best in the business.

At the time of writing, this provider gives you an option of more than 1,200 servers spread across 60 countries. There are hundreds of servers located in the US. Some of the streaming services it unblocks are HBO Now, Sling TV, and BBC iPlayer.

IPVanish is another ‘no-logs’ provider, as it follows a policy of not storing any data that could identify a user. It owns all the servers it operates rather than outsourcing to third parties, giving it much more control over user traffic.

IPVanish also allows for 10 devices to connect at the same time — that’s the most generous offering on this list.

This provider is quite popular with Kodi users for a couple of reasons. Firstly, it enables them to download the Android APK directly to their device. Secondly, the interface is remote control-friendly for Kodi devices that don’t have a keyboard and mouse.

STREAMING VPN:IPVanish is ultra-secure, quick, and has all the facets of a modern-day VPN. It comes armed with a 7-day money-back guarantee.

PrivateVPN is one of the younger providers on our list, but it does the job very well. The service is optimized for both speed and location-evading tech.

At the moment, there are over 100 servers in 60 countries. The server network isn’t as extensive as some of the other providers we’ve recommended, but there are options in the United States. What’s more, PrivateVPN does a really good job of unblocking geo-restricted media sites.

Some of the sites it unblocks easily are Netflix, BBC iPlayer, and ITV Hub. It’ll do the job for Syfy without breaking a sweat.

UPCOMING:PrivateVPN is fast, stable, and unblocks a large number of streaming sites. All plans come with a 30-day money-back guarantee.

Should I use a free VPN to access Syfy?

Free VPNs exist in droves across the interwebs but they’re a poor fit if your aim is to stream HD video. Such services normally only offer a few choices of server locations (with no guarantee that the US will be included), engage in bandwidth throttling, and go to extreme lengths to make money off you. Yes, they’re tempting because of the lack of any upfront payment but you’ll probably end up regretting your decision to use them.

If you’re trying to access Syfy from a location outside the United States, your best bet is to use a paid VPN that has servers optimized for speed as well as hardy, location-evading technology in-built. Customer support is also preferred so you can talk to a specialist in case your attempts to connect are hitting a brick wall. However, free VPNs usually have non-existent customer support and will likely interrupt your experience with a ton of invasive advertisements.

It’s in your best interests to use a paid VPN as a free offering is significantly underwhelming.

Provided you have a US cable subscription, you can access Syfy from anywhere with a VPN. Here’s how to get started:

To watch Syfy outside the US:

Some of the popular titles on Syfy are:

Why is Syfy only available through cable operators?

Syfy is a cable affiliate, meaning it doesn’t cost customers extra to stream the service as long as they have an existing cable connection. Unfortunately, what that also means is that there’s no separate livestream that cord cutters can pay for, bypassing the need to get a cable subscription first.

Syfy’s status as a cable affiliate means that’s how it generates the bulk of its revenue. Cable providers pay it a certain amount of money to provide the service to their customers. There’s also some additional advertising that it permits on the platform to earn more money.

Other than PCs, Macs, iOS devices, and Android devices, Syfy is also compatible with Apple TV, Android TV, Xbox One, Amazon Fire TV, and some smart TV apps. It also has its own Android and iOS app that you can use for streaming.

These devices don’t offer native support for VPN apps, so it’s not a question of simply downloading VPN software and following the step-by-step instructions. However, there are workarounds.

One way to leverage a VPN for the devices in question is to use a virtual router. In this situation, a PC equipped with a wifi card is able to transmit its own wifi signals – just like how smartphones set up wifi hotspots.

You can read our tutorials on how to set up a VPN on a virtual router for Windows and Mac devices.

You can also set up a VPN on a physical router if the firmware supports it.

One such firmware is DD-WRT, a free and open source option that works on a wide range of router models. Paid VPN providers also offer tutorials on how you can set up their individual apps on routers; check individual sites for more detail.