How to watch Rugby World Cup 2019 online free from anywhere

Looking to watch the Rugby World Cup 2019 online, for free? We’ll let you know which teams are taking part, when each game is, and how to live stream the Rugby World Cup in Japan from abroad using a Virtual Private Network (VPN).
Ian Garland Streaming, Kodi and VPN Expert 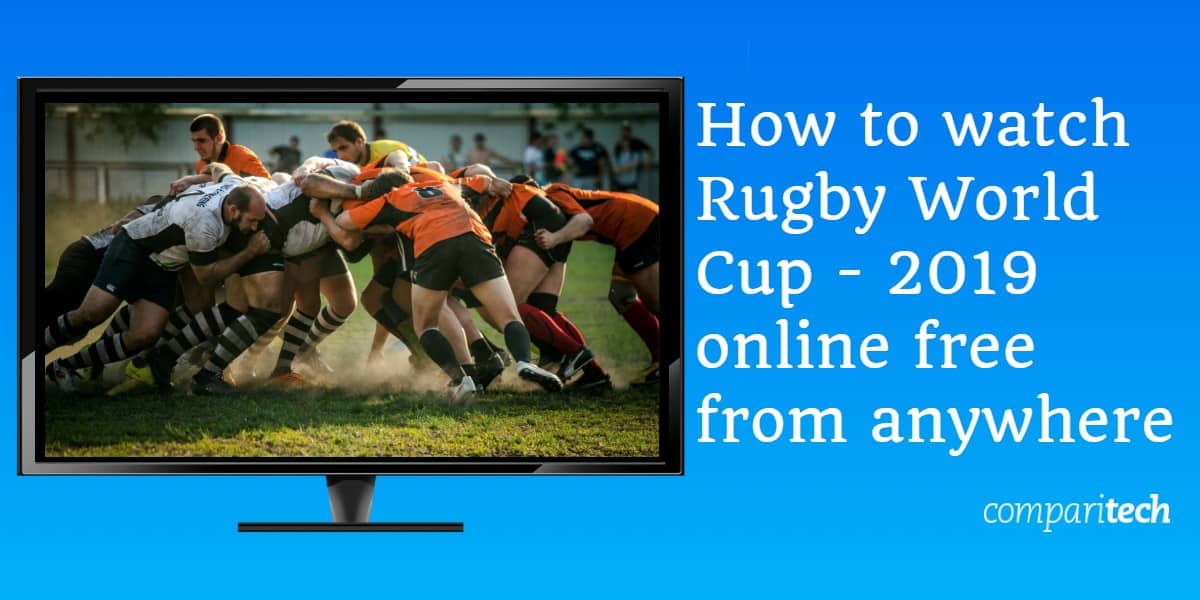 The Rugby World Cup 2019 will take place in Japan from September 20 until November 2. There’ll be 48 games in total, with 20 countries taking part, so there’s certainly a lot to look forward to. The good news is that you can easily live stream the Rugby World Cup abroad since there are official broadcasters in dozens of countries (although depending on where you live, matches might air late at night or early in the morning).

You should note that we’ll only be recommending official sources. While there are often third-party streams for major sporting events like the Rugby World Cup, we advise against using them. To begin with, the video tends to be laggy and low-resolution. To make matters worse, unlicensed streams can be taken offline at any moment for copyright violation. On the other hand, since you can watch the Rugby World Cup 2019 for free, there’s no need to use unauthorized, unreliable streams in the first place.

This event will only be broadcast on region-locked services. As such, you’ll need a VPN to stream the Rugby World Cup abroad.

New to VPNs and not sure how to get started? Don’t worry; it’s easy to access geo-restricted services abroad. Follow the steps below to stream the Rugby World Cup from anywhere.

Here’s how to watch the Rugby World Cup 2019 online from anywhere with a VPN:

Rugby World Cup games will be broadcast live. For this reason, we recommend making sure your VPN works (using the steps above) well before matches are due to begin. This approach ensures you’ll have time to get help from your VPN’s customer support team in the event of unexpected technical problems, and makes it less likely you’ll miss part of the game.

ITV is the main broadcaster of the Rugby World Cup in the UK. This network will show every game of the tournament on either ITV or ITV4, channels that can be watched live and for free online via ITV Hub (or STV Player, if you’re in Scotland). Games featuring the Welsh squad will also be shown on S4C. This Welsh-language channel can be watched free of charge on BBC iPlayer.

Due to the time difference, most matches will be broadcast early in the morning, although once they’re finished, they’ll be added to ITV Hub’s on-demand library. You’ll have 30 days to watch before each is taken down, so there’s no need to worry if you miss a game or two.

Signing up for ITV Hub is free and only takes a minute. All you have to do is enter some basic information (name, email address, and so on). Note that while this service asks for your postal code, it doesn’t actually verify whether or not you live there, so any valid British postal code will work.

ITV Hub and BBC iPlayer are both geo-restricted and only available in the UK. However, if you connect to a British VPN server, you can use either service from abroad. Don’t have a VPN yet? ExpressVPN comes with a risk-free 30-day money-back guarantee, allowing you to stream the Rugby World Cup from abroad and claim a refund if you’re unsatisfied.

Where else can I watch the Rugby World Cup online?

NBC has exclusive broadcasting rights for this event in the US. If your cable TV package already includes NBC (or if you subscribe to a supported over-the-top service like Sling TV or PlayStation Vue), you can log in and watch a handful of matches for free.

However, if you’d like to stream every match, you’ll have to purchase the Rugby World Cup pass on NBC Sports Gold. This costs $199.99 USD and allows you to stream every game live or later, on-demand. This is a fairly expensive way to watch, though, especially given that the same content is being broadcast for free in other countries.

NBC, Sling TV, and PlayStation Vue are geo-restricted, so you’ll need a VPN to access them from outside the US.

Canadian fans can stream every game of the tournament live on TSN. If you already have TSN channels as part of your cable package, you can just sign in and start streaming right away. If not, there is a way to watch the 2019 Rugby World Cup without cable.

Just sign up for TSN Direct instead. This costs $4.99 CAD per day or $19.99 per month (unfortunately, there’s no trial period). You will need a payment method linked to a Canadian address, so it’s near-impossible for foreign users to register.

TSN is region-locked, meaning you’ll have to either be in Canada or connected to a Canadian VPN server to access it.

Wallabies fans can follow the Australian national team for free as every one of the squad’s matches will air live on 10Play. The remaining matches will be on Fox Sports, so if you already have an Optus or Foxtel TV subscription, you can log in and watch these matches at no added cost using the Optus website or Foxtel Go app, respectively.

Don’t have cable? In that case, you can watch on Foxtel Now instead. This is more expensive (the required channel packs cost $40 AUD per month) but there is a 10-day free trial, during which you’ll be able to watch any channel you like.

Foxtel and Optus services are only available in Australia. Additionally, Foxtel requires a local phone number when signing up, making it difficult to register unless you usually live in Australia. Current subscribers can use these services as normal from abroad by connecting to a VPN.

Japanese coverage will be split between three broadcasters: NHK, Nippon TV, and J Sports. However, Nippon TV has no online live stream and NHK only offers an internationally-available stream, which won’t show live sports.

This just leaves J Sports. For ¥1,800 (around $17 USD), you can purchase a one-month rugby pass which allows you to watch each match of the Rugby World Cup live (or on-demand if you’d prefer). However, this service only offers Japanese commentary, and you’ll need a payment method linked to a Japanese address to register, so it’s not an ideal way to watch unless you usually live in Japan.

J Sports is only available in Japan, although subscribers can watch from abroad by connecting to a Japanese VPN server.

Even if we haven’t mentioned your country above, there’s still a good chance you’ll be able to watch. Just check out the list of international Rugby World Cup broadcasters to find out which networks are showing the tournament in your country. Even if your country doesn’t have full coverage (or if you’re not subscribed to the required service), you can often watch your national team play on free-to-air networks.

Which countries are taking part in the 2019 Rugby World Cup?

Every year, 20 countries go head-to-head in the Rugby World Cup. The participating nations this time around are: