Looking to watch the 2020 Australian Open Men’s final online? We’ll explain how to live stream Thiem vs. Djokovic for free, so you won’t have to miss a second of the action. Currently away from home? We’ll also let you know how to unblock your usual streaming services abroad with a Virtual Private Network (VPN).
Ian Garland Streaming, Kodi and VPN Expert 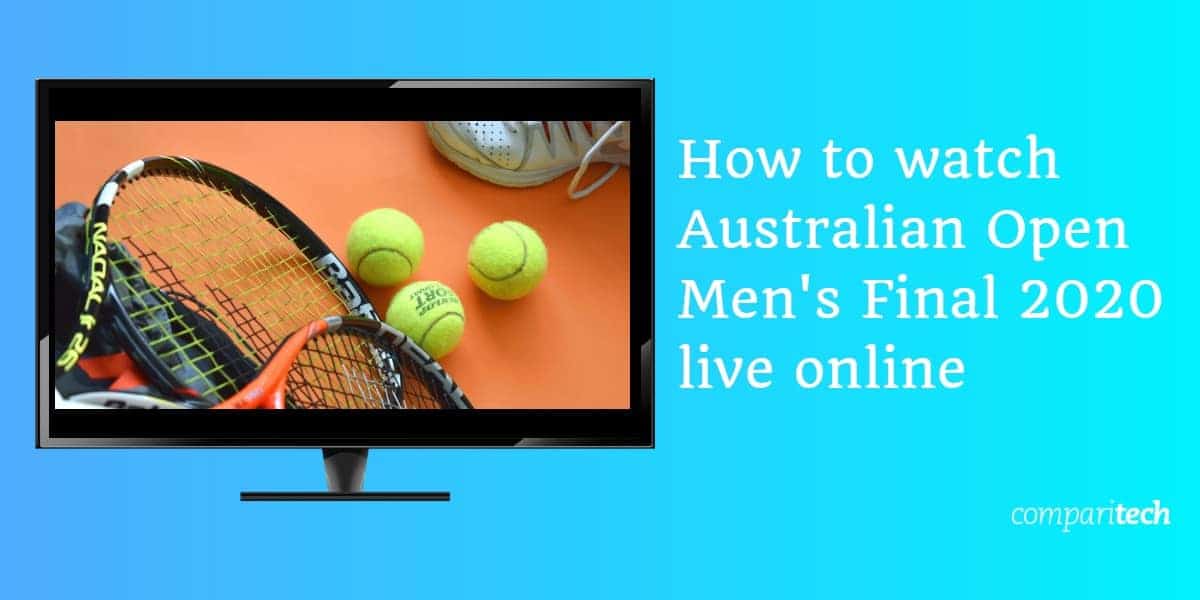 The Men’s singles final match between Dominic Thiem and Novak Djokovic will take place on February 2, sometime after 7:30 PM AEDT (3:30 PM EST / 8:30 AM GMT). There’s a lot on the line here, and luckily, plenty of ways to live stream Thiem vs. Djokovic for free, even if you’re abroad (outside of Australia). Read on to find out how to watch the 2020 Australian Open live, wherever you are in the world.

You should note that we’ll only be recommending official Australian Open broadcasters. Unauthorized streams will likely be available but we’d advise against using them, partly because of their laggy, low-resolution video, and partly because of how frequently unlicensed streams are taken offline by the copyright holder. The Men’s singles final match will be broadcast for free in several countries anyway, so there’s no reason to use third-party streams.

Thiem vs. Djokovic will be broadcast exclusively on region-locked streaming platforms. If you’re abroad at the moment and would prefer to watch on your usual services, you’ll need a VPN.

How to watch Thiem vs. Djokovic online from abroad

VPNs work by routing your internet traffic through a server elsewhere in the world. This changes your IP address, which most region-locked services use to find your location, and allows you to use geo-blocked platforms in countries where they’re usually inaccessible. Here’s a brief guide to unblocking services from back home while in another country:

Given how important this match is, and the fact that it’ll be broadcast live, we recommend testing your VPN ahead of time. This ensures that you won’t be caught off-guard by any last-minute technical problems since there’ll be plenty of time to get help from your VPN’s customer support team.

How to live stream Thiem vs. Djokovic for free on Australian TV

Channel 9 is showing every Australian Open match live, including the Men’s singles final between Thiem and Djokovic. This means that you’ll be able to watch online for free via 9Now. There’ll be live coverage from 2:30 until 5 PM AEDT, and again from 6:30 PM until the early hours.

9Now is completely free-to-use but before you can stream anything, you’ll have to create an account. This is pretty straightforward and simply requires you to verify your email address. Also, this service is region-locked, so if you’re an Australian who’s out of the country, you’ll need a VPN to access it. ExpressVPN comes with a 30-day money-back guarantee so you can watch Thiem vs. Djokovic risk-free. If you’re not satisfied, you can simply cancel within 30 days to claim a full refund, no questions asked.

Where else can I watch the Australian Open Men’s finals online?

The Australian Open is one of the most prestigious tennis tournaments in the world, so it should be no surprise that there’s strong international interest. Below, we’ll let you know how to live stream Thiem vs. Djokovic from abroad:

The final match of the 2020 Australian Open will be broadcast live at 3:30 AM EST on ESPN and The Tennis Channel. If your cable TV package already includes these channels, you can just sign in to the respective website and begin streaming right away at no extra cost.

Luckily, it’s also possible to stream Thiem vs. Djokovic without cable. ESPN’s website allows you to log in using a YouTube TV, Hulu with Live TV, or Sling TV account. Better yet, each of these services offers a free trial period, so if you’d like, you could register, watch the Men’s singles final, and cancel to avoid being charged.

It’s worth mentioning that all of the above services are geo-blocked, so if you’re outside of the US, you’ll need a VPN to use them.

British tennis fans can stream the Thiem vs. Djokovic match live at 8:30 AM on Eurosport. If that’s a little early for you, don’t worry; you can just watch the replay at 6 PM instead. Here’s the bad news: if you’re already subscribed to Eurosport through your cable provider, you’ll have to pay more to watch online.

Eurosport’s streaming platform is called Eurosport Player, and it costs £6.99 per month (or £33.99 per year). This service doesn’t offer any kind of trial period, either, unfortunately. Further, as its content is geo-blocked, you’ll have to use a British VPN server to watch the Australian Open on Eurosport.

Canada actually has separate broadcasters for English and French coverage. TSN will be showing the Thiem vs. Djokovic match with English commentary, while French speakers can follow along on RDS. There are no differences between the live streams or pricing, though, so you won’t be penalized for choosing one platform over the other.

Fans can actually watch for free online if they receive either of these channels as part of their existing cable TV package. If you don’t, though (or if you don’t have cable), you can pay $4.99 CAD for a one-day pass. Monthly passes are also available for $19.99, although as this is the final game of the tournament, there’s really no need to purchase one.

TSN and RDS are region-locked and usually only available in Canada. If you’re abroad on vacation, though, you can access these services as normal by connecting to a Canadian VPN server.

Well, the final match of a Grand Slam tournament is never boring but this looks to be one of the most memorable fixtures in recent years. Dominic Thiem is the heavy underdog here, looking for his first Australian Open victory against tried-and-tested seven-time champion Novak Djokovic.

There is a glint of hope, however. Thiem has come out on top in two of the last three games these pair have played and has a good record of winning tie-breakers. On the other hand, Djokovic is used to this court, this level of pressure, and the toll that a length tournament can take, so it’s difficult to see him losing. Ultimately, whoever wins, we’re in for an extremely exciting match.