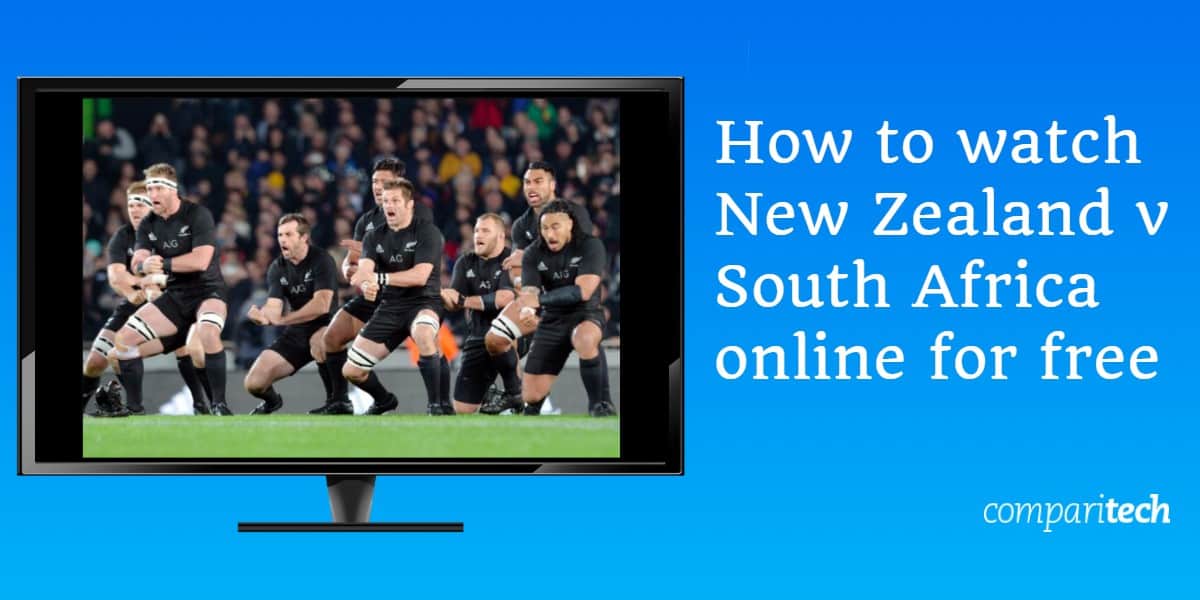 Please note that we’ll only be recommending official sources for watching the New Zealand v South Africa Rugby World Cup 2019 match. Unlicensed streams are commonplace with popular sporting events. However, they typically offer low resolution while the buffering and lag may result in you missing out on the action. Worse still, many of these unauthorized streams are taken down during the game. Fortunately, there’s no need to be left without a stream of New Zealand v South Africa because you can watch it online for free.

You can watch New Zealand v South Africa live on ITV. If you want to watch online from abroad, you’ll need a VPN. That’s because ITV Hub is region-locked and only available in the UK.

With the help of a VPN, you can live stream New Zealand v South Africa from anywhere in the world. All you have to do is follow these simple steps.

It’s very easy to watch New Zealand v South Africa online free on UK TV. That’s because ITV secured the broadcasting rights and will be airing all 48 matches of the 2019 Rugby World Cup. If you’re in the UK, you can watch live on regular TV (most games will be broadcast on ITV1) or live stream the action via ITV Hub.

You can also watch ITV Hub abroad but you’ll need a VPN with servers in the UK in order to do so. ExpressVPN offers a 30-day money-back guarantee, allowing you to watch this match risk-free. Note that you’ll also need to sign up for a free account in order to use ITV Hub. Fortunately, it only takes a few seconds. While you’ll be asked for a UK postcode, any UK postcode will do.

Where else can I watch New Zealand v South Africa live online?

While you can watch New Zealand v South Africa live online for free on ITV, there are a number of other options available in other countries:

Eir Sport holds the Rugby World Cup 2019 broadcasting rights in Ireland. It will be broadcasting all 48 games live on TV as well as online via the Eir Sport apps. However, Eir Sport is not available to watch for free. You can get Eir Sport by having an Eir broadband subscription or by purchasing a monthly (€29.99) or annual (€299) Eir Sport subscription if you’re a Sky TV customer.

It’s worth knowing that RTÉ will be showing 14 matches on free-to-air channel RTÉ2. These include all of Ireland’s games as well as the knockout stages but unfortunately, not New Zealand v South Africa.

Both Eir Sport and RTÉ are region-locked, meaning you’ll have to connect to a server in Ireland via a VPN if you’re watching from abroad.

All Rugby World Cup 2019 matches will be available to stream on NBC Sports Gold, including New Zealand v South Africa. If you don’t have a cable TV subscription, you can purchase a Rugby World Cup Pass for $199.99 USD. Alternatively, passes for individual games are available for $29.99.

While there’s no free way to watch New Zealand v South Africa on US TV, many matches will be available on cable TV on NBC’s NBCSN (NBC Sports Network) channel. However, you don’t need cable TV in order to watch NBCSN. Indeed, the channel is available via the following streaming services: FuboTV (from $54.99 USD/month), Hulu with Live TV ($44.99/month), PlayStation Vue (from $49.99/month), Sling TV ($25/month), and YouTube TV ($49.99/month). All of these services offer free trials but are only available in the US so a US IP address is required to watch from abroad.

Rugby fans in Australia can watch New Zealand v South Africa on Fox Sports which will be broadcasting all 48 games on two dedicated 24-hour channels. In order to watch, you’ll need a Foxtel Sports subscription which costs $4.99 AUD monthly or $49.99 yearly.

While Network Ten holds the free-to-air rights and will broadcast 10 games, this does not include the New Zealand v South Africa fixture. Both Fox Sports and Network Ten are region-locked so a VPN for Australia is required.

Can I use a free VPN to watch New Zealand v South Africa live online?

While you might come across a free VPN that works with ITV or one of the other broadcasters airing New Zealand v South Africa, it’s not a risk worth taking. For starters, free VPNs tend to have too many users on their limited number of servers. Many free VPNs then resort to throttling the bandwidth of users in an attempt to manage this. The result is that live streaming becomes a challenge with regular interruptions in the form of buffering and lag.

Unfortunately, you’ll have to contend with more than just performance issues when using a free VPN service. Security is a major concern with some free VPNs containing malware and others logging your browsing history and selling the data to third parties. When you use a free VPN, you miss out on the many perks offered by the best VPNs including multiple simultaneous connections and 24/7 live chat support.

What should I know about the New Zealand v South Africa Rugby World Cup match?

New Zealand and South Africa is one of the biggest rivalries in rugby. The two teams have met on 50 occasions with New Zealand winning 36 times and South Africa 14. The most recent match between these two sides was in July 2019 when they tied 16-16 in the 2019 Rugby Championship.