The Geico 500 is fast approaching and NASCAR fans around the world can watch the entire race live online. We'll show you how to livestream the Geico 500 whether you live in the US, Canada, or anywhere else.
Paul Bischoff TECH WRITER, PRIVACY ADVOCATE AND VPN EXPERT 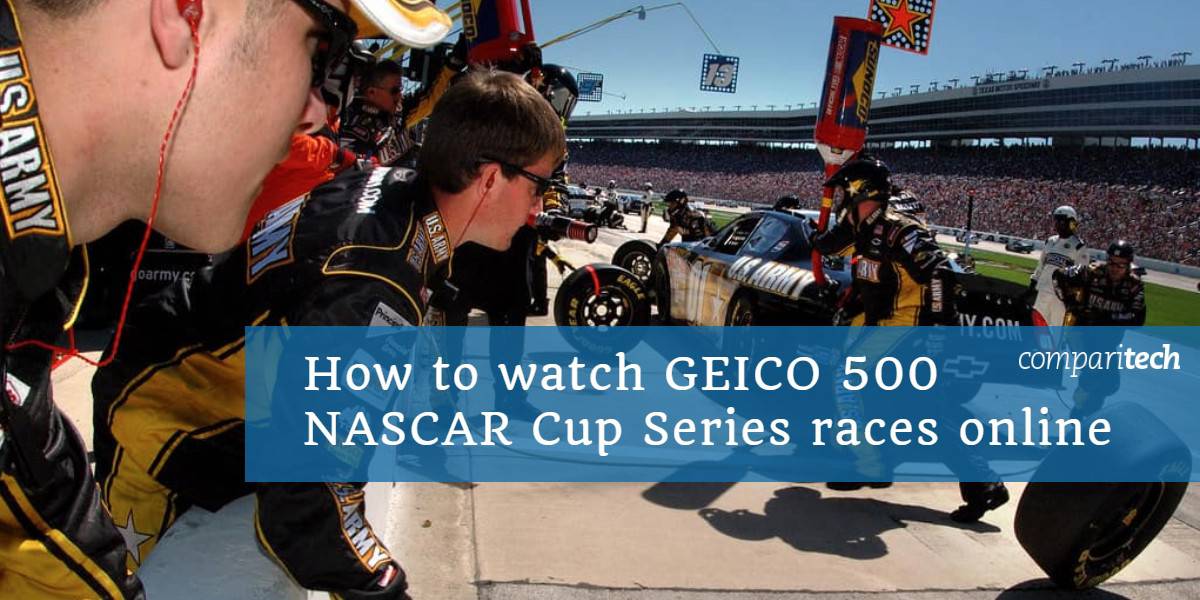 The 2019 Geico 500 is set to begin at 2 p.m. ET on April 28 at Talladega Superspeedway in Lincoln, Alabama. Joey Logano won last year’s Geico 500, which ultimately led to him winning his first NASCAR Cup Series championship.

Fox is the official TV broadcaster for the Geico 500. Although the live race will be shown online, the video streams will likely be restricted to viewers in the United States and Canada. If you’re abroad, the stream will probably be blocked. To get around this, we recommend using a VPN.

A VPN encrypts your internet connection and routes it through a server in another location. Connecting to a VPN in the US will allow you to unblock the stream and watch the Geico 500 as if you were in the country.

Our top recommendation is ExpressVPN. This VPN provider offers simple apps, fast speeds, and impeccable security so you can stream the race live in HD. 24/7 live chat support is available should you need it, and it works on Mac, PC, Android, iOS, Amazon Fire TV, Linux, and certain wifi routers.

BEST VPN FOR GEICO 500:ExpressVPN is our #1 choice ExpressVPN is a veteran provider with hardened security, fast speeds, and plenty of servers you can use to unblock NASCAR races from abroad. It comes with a 30-day risk-free money-back guarantee.

How to watch the Geico 500 abroad with a VPN

If you’re not in the United States, you’ll probably need a VPN to bypass any geographic restrictions on the video stream. Here’s how it’s done:

We recommend testing your VPN in advance to ensure a seamless experience on race day. Just go to the app or site where you plan to watch and give it a test run on some other live video. If it doesn’t work, trying clearing your cookies and cache, or contact your VPN’s customer support.

How to watch the Geico 500 live online

Fox owns exclusive rights to show the Geico 500 on TV in the US. With that in mind, you can subscribe to a TV streaming service that carries Fox to watch the race live online.

Note: This article only recommends official sources. You might be able to find unlicensed streams elsewhere online, but we advise against using them. The video quality is often poor and requires a lot of buffering, and the stream could get taken down at any second. Not to mention the websites that host these streams are full of invasive ads and even malware.

We’ve listed the internet TV services in the US and Canada where you can watch the Geico 500 live online. Keep in mind you will need to either be in the US or use a VPN to connect to an American server in order to bypass any location restrictions. Additionally, you might need a local form of payment to sign up.

If you haven’t signed up to Fubo.tv before, you can get a 7-day free trial to watch the Geico 500 online for free and cancel afterward. If you don’t cancel, subscriptions start at $54.99 per month.

When signing up, make sure you are in the US or connected to an American VPN server to ensure Fox is included in your package. Fubo.tv is available in many countries, and the channel bundles vary accordingly.

US subscribers to Fubo.tv also get access to all of the races on NBC, making this a suitable option to watch the full 2019 NASCAR Cup season.

A 7-day free trial is on offer if you want to watch the Geico 500 free of charge and then cancel afterward. The price is $25 per month after that.

Sling TV is only available in the US, so you’ll need to use a VPN if you’re abroad.

Apps are available for iOS, Android, Roku, Apple TV, Chromecast, game consoles, Amazon Fire TV, and many smart TVs. Or you can just watch in a web browser on your PC or Mac.

Hulu + Live TV is an internet TV streaming service with over 50 channels, including all the NBC and Fox channels you’ll need to watch NASCAR online. It costs $40 per month and comes with a 30-day free trial.

It’s only available in the US, so use a VPN if you’re abroad.

Apps are available for iOS, Android, Apple TV, Chromecast, Fire TV, game consoles, Roku, and smart TV. You can also watch in a web browser on PC or MacOS.

YouTube TV is another live internet TV service that includes unlimited DVR storage. So if you prefer to record the Geico 500 and watch it later, this is a great option.

The price is $49.99 per month and comes with a 30-day money-back guarantee, so you can give it a try and cancel after the race is over.

You can watch in a web browser on a PC or Mac, or get the app for Android, iOS, Chromecast, Roku, PS4, Xbox, Apple TV, Amazon Fire TV, smart TVs, and more.

Youtube TV is limited to the US for now, so you’ll need a VPN if you’re abroad.

PlayStation Vue (PS Vue) doesn’t require a PlayStation to subscribe and comes with Fox and NBC bundled into the basic package. After a 5-day free trial, the service costs $44.99 per month.

Watch in a web browser or get the app for iOS, Android, Chromecast, Apple TV, Fire TV, and Roku.

PS Vue is limited to US residents, so connect to an American VPN server if you want to watch from abroad.

DirecTV Now is a standalone service that doesn’t require a cable subscription to sign up. For $50 per month, you get access to Fox, NBC, and some 40 other channels.

Apps are available for Roku, Apple TV, Fire TV, Chromecast, iOS, Android, and Samsung Smart TVs. Or you can watch on the web through Chrome or Safari.

A 7-day free trial is on offer. DirecTV Now is restricted to US viewers, so use a VPN to watch when abroad.

TSN has broadcast rights for the Geico 500 in Canada. You can watch TSN online without a cable subscription with TSN Direct. One day of access costs CA$4.99, or get a monthly subscription for CA$19.99 per month. Unfortunately, there’s no free trial.

TSN Direct is only available to viewers in Canada. If you’re outside the country, use a VPN to connect to a server in Canada.

You can watch the Geico 500 live in a web browser or get the TSN Go app for iOS, Android, Samsung Smart TVs, Xbox One, and Apple TV.