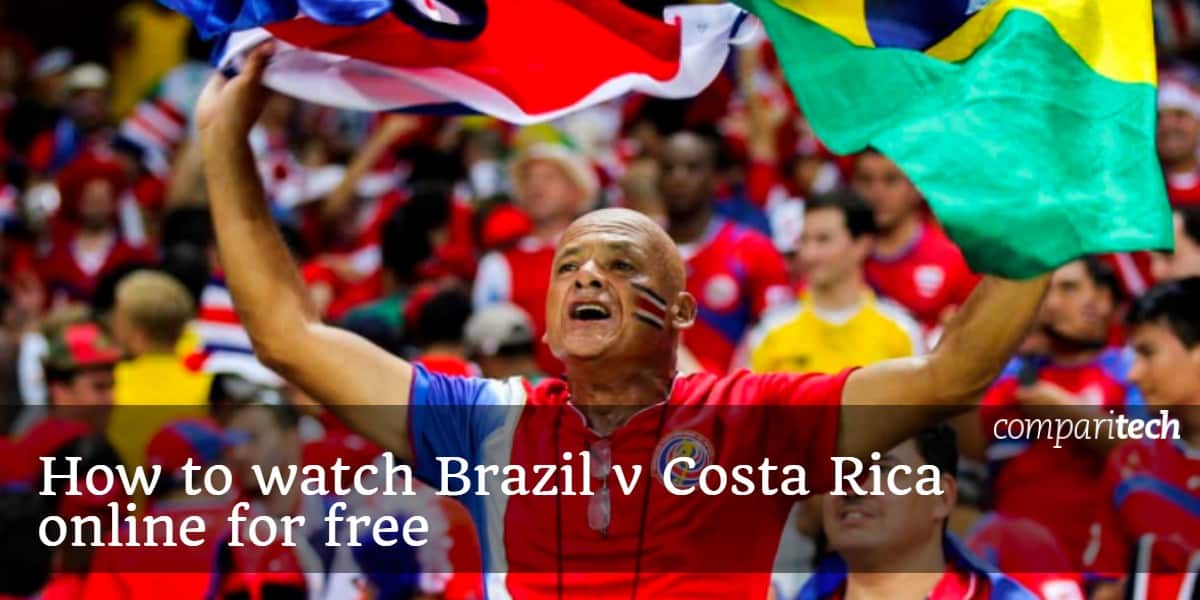 The FIFA World Cup 2018 group stages are heating up, with plenty of action still to come. On Friday June 22, the Group E game between Brazil and Costa Rica will be taking place at the Krestovsky Stadium in Saint Petersburg at 1PM BST (5AM PST / 8AM EST).

If you’re a fan of Brazil or Costa Rica, or simply want to see the clash between these two teams, you no doubt want to know how you can stream the action live. Thankfully, it’s possible to view every Russia World Cup game online and for free, if you know where to look. Multiple sources will be streaming the games in various languages. Some of these will be geo-restricted and blocked in certain regions.

Thankfully, a Virtual Private Network (VPN) can grant you access via a variety of sources covering multiple languages. The VPN will mask your IP address and spoof your location. This means you can watch Brazil v Costa Rica live online from the UK, the US, Australia, Canada, Thailand, Germany, or anywhere else in the world.

In this post, we’ll explain how you can stream this and other FIFA World Cup 2018 games in various languages across all your devices.

Many countries have at least one broadcaster that is showing some or all of the Russia World Cup 2018. Most of these will be broadcasting on TV and via live online streams. Commentary for the games will be in various languages depending on where the streaming source is located. If you’re looking for English commentary, you’re in luck as there will be a wealth of options, including:

For those wanting the Brazil v Costa Rica game, in particular, you might be looking for Portuguese or Spanish commentary.

For Spanish-language commentary, you actually have a quite a few options, including:

Other Spanish-speaking countries, including many Central and South American countries, will have Spanish-commentary streams available.

For Portuguese-language broadcasts, here are some of your options:

There are a ton of other streams available from broadcasters across the globe in a host of languages. You might be wondering how accessible all these streams are, depending on where you’re located. We’ll get into this in more detail in the next sections.

Many of the streams we’ve mentioned above are free while others require payment. You may have to subscribe directly to the streaming service or sign in using credentials from a cable provider or other subscription service. In this and later sections, we’ll cover both options.

If you want English commentary, one of the best places to catch World Cup matches for free is The World Game website. This is run by Australian broadcaster SBS. It only has rights to some of the matches, but the Brazil v Costa Rica game happens to be one of them.

If it’s Spanish or Portuguese commentary you’re after, you can use one of the streams listed above. If you’re located outside of the streaming source region, a VPN can be used to spoof your location.

ExpressVPN is a top-notch provider and is definitely the best VPN for streaming FIFA World Cup 2018 matches. It’s inexpensive, has a generous trial period, and is super simple to use. ExpressVPN boasts a more-than-ample network of high-speed servers spanning 94 countries. It’s renown for its ability to unblock streaming services, including heavily restricted sites like BBC iPlayer and Netflix.

This provider has apps for all popular operating systems, including MacOS, Windows, Linux iOS, and Android, and can be configured with routers. You can always be sure your data is safe with military-grade 256-bit encryption and a strict privacy policy means no logs of personally identifiable information are ever retained.

ExpressVPN is ideal for beginners and it easy to set up and use. Plus, if you do happen to run into issues, the live chat customer support is always available. Signing up is as simple as choosing a plan (1, 6, or 12 months) and entering your payment information. A 30-day money-back guarantee means that you can try it risk-free. You could even watch the entire 2018 World Cup tournament during this time and get your money back at the end.

EXCLUSIVE OFFER: Opt for an ExpressVPN annual subscription, and you’ll get three months extra for free.

ExpressVPN is our top recommendation, but there are certainly other providers worthy of a second look. Low-cost and easy-to-use options for VPNs that can help you stream the World Cup 2018 matches include NordVPN and CyberGhost.

Once you’ve selected a provider, here’s how to stream the Brazil v Costa Rica match with a VPN:

For this and any other World Cup match, it’s always a good idea to test access to the streaming source well before the game starts so you have time to address any issues.

If you’re watching the Brazil v Costa Rica game or any other World Cup match from Costa Rica, then you should have simple access to streams with Spanish commentary.

The same goes if you’re in Spain, Mexico, or another Spanish-speaking country. For those countries you can access the streams we listed earlier. For countries we didn’t cover you may want to check out the full list of official World Cup broadcasters.

Viewers in the US can access live streams with Spanish commentary through Telemundo Deportes via NBC Sports.

If you want to access any of these streams while traveling outside of the source region, you can use a VPN to spoof your location.

In Portugal, only a few select games are available for free on RTP and SIC. Sport TV will be showing the entire tournament but requires a paid plan (starting at €9.99 per month). All games on RTP, SIC, and Sport TV will be in Portuguese.

If you want to access these streams from outside the source region, you can do so using a VPN.

For those in the UK, access to live streams will be completely free. The BBC and ITV are sharing broadcasting rights so all games will be available on one or the other channel. The Brazil v Costa Rica game will be aired on ITV and online through the ITV Hub streaming service.

Both services are free to watch but you’ll be required to sign up for a free account. This involves inputting a postal code which should be located in the UK for it to work. Although, neither service verifies that this is, in fact, your actual postal code. Another stipulation to use BBC iPlayer or ITV Hub is that you have a UK TV license, but this does not appear to be enforced. As such, it is possible to access both services via a VPN.

The BBC has been getting strict about the use of VPNs to access its services so not all of them will work. ExpressVPN reliably unblocks BBC iPlayer making it an ideal option.

Coverage on both BBC and ITV Hub will have English commentary.

US broadcasting rights for the World Cup 2018 are limited to just two sources. English-commentary streams will be provided through FOX Sports and Spanish streams can be viewed through Telemundo Deportes.

FOX Sports is accessible using login credentials from other subscription services, including fuboTV, DirecTV Now, and Sling TV. Another option is to purchase a FOX Sports soccer match pass for $19.99.

If you happen to be in the US during the World Cup and don’t have a cable subscription, then your best bet is to use a VPN and tune into a free non-US stream.

For residents of Canada, streaming the Russia World Cup games will pose no issue, as long as you have a cable subscription. English-commentary games can be viewed on TSN or CTV, while French commentary will be provided through RDS.

If you don’t have cable subscription, you can access TSN or RDS by signing up for individual subscriptions priced at CAD 24.99 per month for each service.

If you’d prefer to watch the Brazil v Costa Rica game for free, a good option would The World Game website. All you need to do is sign up for a VPN and connect to an Australian server.

We just mentioned The World Game website and indeed this is one of the best options for Australian residents wanting to watch FIFA World Cup matches for free. This site, run by SBS, will be streaming 25 of the total number of matches.

Optus Sport, on the other hand, will be streaming all matches. This broadcaster does require a paid account starting at AUD 15 per month. However, there’s a 14-day free trial so you could watch most of the tournament without paying a thing.

If you’d prefer to find commentary in a language other than those we’ve covered so far, here are some of your options:

If you’re outside of the source region for any of these channels, you’ll need to use a VPN to mask your IP address. Just be sure that your chosen provider has servers in the appropriate region before you sign up. Loads on the servers may be particularly high during World Cup matches, so ideally the provider should have multiple servers in a given location. This will help ensure that servers don’t get overloaded and you get to watch a seamless stream.