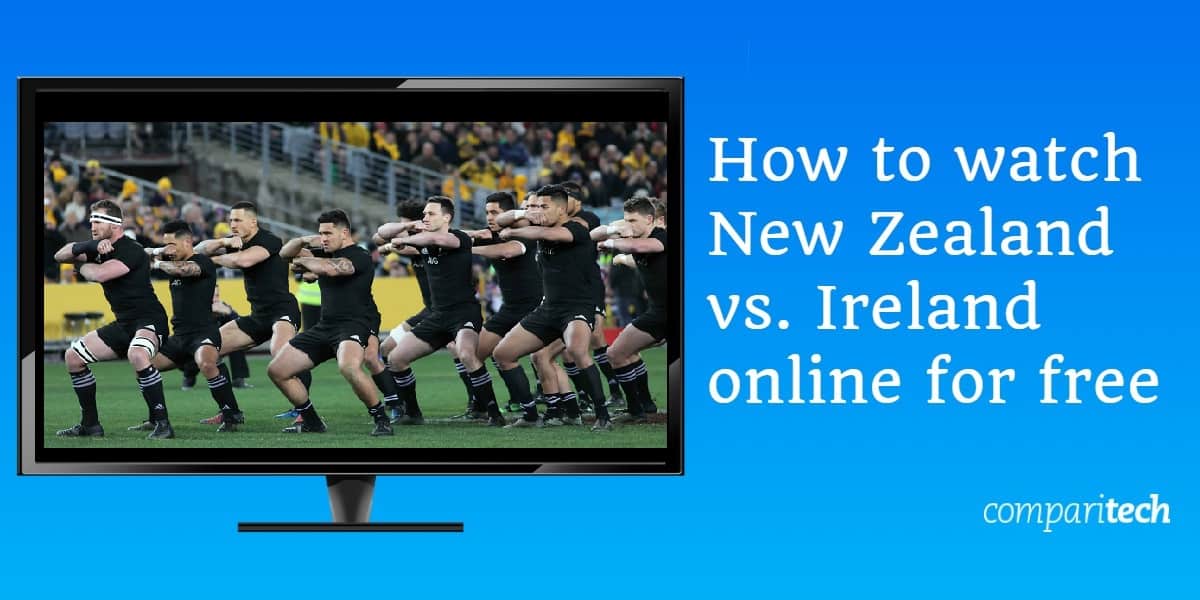 The New Zealand vs. Ireland match will be held at Tokyo Stadium and is scheduled to begin at 11:15 AM BST (6:15 AM EST / 7:15 PM JST) on Saturday, October 19. If this is a little too early for you, don’t worry; most of the official Rugby World Cup broadcasters will also allow you to watch on-demand at a time that suits you better. Take a look below to find out how you can live stream the New Zealand vs. Ireland fixture from abroad.

It’s worth bearing in mind that we’ll only be recommending official sources for this match. Although major sporting events like this one often have unofficial streams available, these tend to be laggy, with very low-resolution video. Further, third-party streams can be taken offline at a moment’s notice for copyright violation. Considering you can watch New Zealand vs. Ireland online for free anyway, there’s no need to use shady, unreliable sources.

This match will only be shown on geo-restricted streaming platforms. As such, you’ll need a VPN to watch New Zealand vs. Ireland abroad.

How to watch New Zealand vs. Ireland abroad with a VPN

VPNs work by sending your traffic through a secondary server elsewhere in the world. This hides your true location and gives you a new, region-specific IP address, which tricks region-locked services into letting you use them abroad. Follow the steps below to watch the Rugby World Cup quarter-finals from anywhere:

As this match will be shown live, we strongly recommend running through the steps above well before it’s due to start. This way, you’re less likely to miss the beginning of the game due to unforeseen technical problems since you’ll have plenty of time to contact your VPN’s support team.

How to live stream New Zealand vs. Ireland for free on UK TV

British rugby fans can stream the New Zealand vs. Ireland match live and free of charge on ITV Hub. What’s more, Rugby World Cup games are available for 30 days after they air, so you don’t have to worry if you have other plans on match day. Note that you will have to create an account before you can watch anything, but this only takes a second.

If you want to watch this game live online, you’ll need a TV license. However, while ITV Hub occasionally tells the user this via a popup, it’s far from consistent and there aren’t any verification measures in place. Additionally, you won’t require a TV license if you only intend to stream New Zealand vs. Ireland on-demand.

ITV Hub is region-locked, meaning you’ll have to either be in the UK or connected to a British VPN server to access it. Still don’t have a VPN? No problem: ExpressVPN has a 30-day money-back guarantee that allows you to watch the Rugby World Cup risk-free. If you’re unimpressed, just cancel within 30 days to receive a full refund.

Where else can I stream the Rugby World Cup Quarter-finals online?

Looking to watch the Rugby World Cup match between New Zealand and France from abroad? Take a look below to find out which broadcasters are showing this game in your country:

This match will be shown on Spark Sport in New Zealand. This service has a monthly subscription plan, but this won’t actually let you stream the Rugby World Cup. Instead, you’ll have to purchase a match pass ($24.99 NZD each) or a tournament pass ($89.99).

As previous Spark Sport broadcasts have been plagued by technical problems, this match will be simulcast on TVNZ, a free-to-air channel. However, the New Zealand vs. Ireland game will not be available for streaming on TVNZ’s website.

Spark Sport is geo-restricted, so you’ll need a VPN to access it from abroad.

This match will air on RTÉ2 in Ireland. This platform is completely free, and you don’t even have to create an account.

If you’re already an Eircom TV subscriber, you might prefer to watch on Eir Sport. However, with no online-only pass available and TV packages starting at €49.98 per month, it’s not worth signing up just to stream the Rugby World Cup.

RTÉ Player and Eir Sport are only available in Ireland. However, you can still use these services from other countries by connecting to an Irish VPN server.

Unfortunately, there’s no free way to stream New Zealand vs. Ireland in the US. In fact, despite NBC Sports having exclusive broadcasting rights, even existing subscribers have to pay to watch. This is because NBC Sports Gold is selling Rugby World Cup passes at $24.99 USD per game or $199.99 for the remainder of the tournament. Given that these matches are being broadcast elsewhere for free, there’s little incentive to buy such an expensive pass.

NBC Sports Gold is region-locked, which means you’ll have to use a VPN to access it from outside the US.

TSN is showing every Rugby World Cup match (including New Zealand vs. Ireland) across Canada. If TSN is already included as part of your cable TV package, you can sign into the website and start watching right away at no added cost.

If you don’t have cable, you can just sign up for TSN Direct instead. This service costs $4.99 CAD for a one-day, online-only pass, or $19.99 for one month’s access. Unfortunately, there’s no free trial period, though, and you’ll need a payment method linked to a Canadian address to register.

TSN is geo-restricted, so if you’re outside Canada, you’ll have to use a VPN.

The New Zealand vs. Ireland match will be shown on Fox Sports in Australia. Existing Foxtel TV customers can log in to the Foxtel Go app and watch this (and every other 2019 Rugby World Cup game) live, at no added cost.

You can also sign up and watch via Foxtel Now if you don’t have cable TV. Although the required channel packs usually cost $40 AUD per month, this service includes a free 10-day trial, and during this time, you’ll have access to all of Foxtel’s channels. This means that you can sign up, watch most of the Rugby World Cup, and cancel to avoid being charged.

The above services are region-locked. As such, you’ll have to connect to an Australian VPN server to use them from other countries.

The 2019 Rugby World Cup is being shown in dozens of countries, all over the world. If we didn’t mention yours above, you’ll likely be able to find a suitable local source in the official list of Rugby World Cup international broadcasters. Bear in mind that some networks won’t allow you to watch live events online, so it pays to do a little research ahead of time.

New Zealand has had an excellent World Cup so far, marked by its emphatic victories over Canada and Namibia. Although the All-Blacks have won 90 percent of all games played against Ireland (that’s 28 wins, one draw, and two losses), the world’s number one squad could face some problems going into this match.

For one thing, both of Ireland’s victories have come in recent years. For another, despite putting on a poor show against Japan, the Irish squad crushed Scotland in its opening match, so it’s clearly still on form. Ireland tends to play very consistently, and if the stars align, perhaps it’ll pick up its third consecutive win against the current world champions.