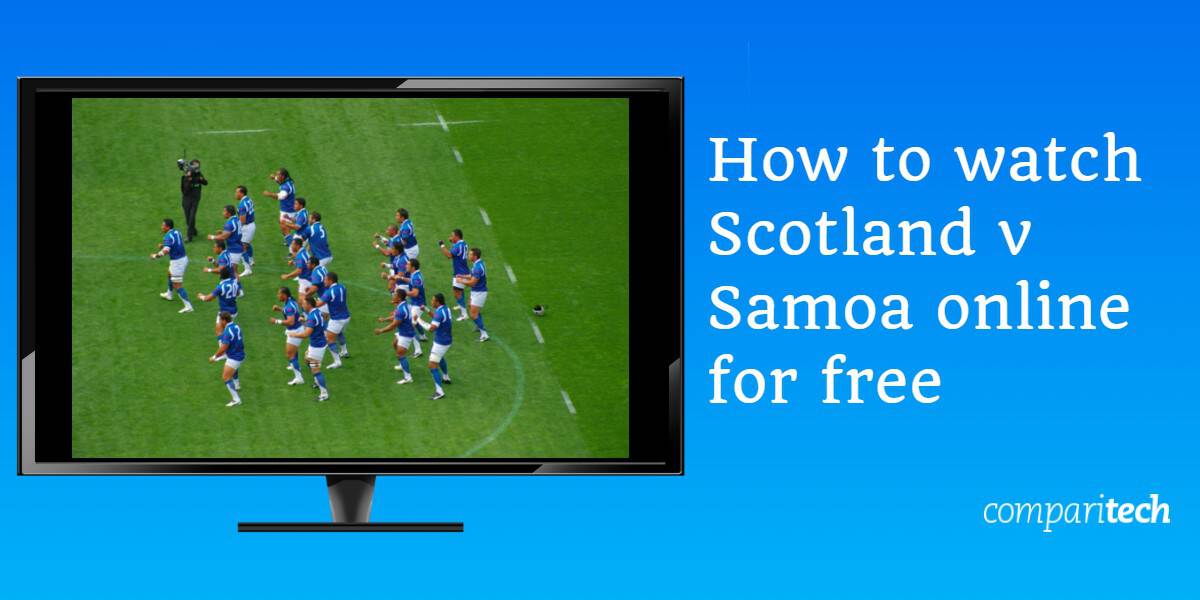 The Scotland v Samoa Rugby World Cup 2019 match will take place on Monday, September 30 at 11:15 AM BST (6:15 AM EST and 19:15 JST local time) at Kobe Misaki Stadium in Kobe, Japan. While the match will only be broadcast in certain countries, you can live stream Scotland v Samoa abroad by connecting to a Virtual Private Network (VPN). Better still, we’ll show you how to watch the game online for free.

Please note that we’re only recommending official sources for watching Scotland v Samoa. Unauthorized streams are prone to being taken offline, resulting in you missing out on the match. They also often offer low resolution as well as performance issues such as lag and buffering. Besides, there’s no need to risk the disappointment of a poor quality unlicensed stream because you can watch Scotland v Samoa online for free.

Scotland v Samoa is only available on region-locked platforms. This means that while you can watch the match online for free, you’ll need a VPN in order to live stream abroad.

Unsure where to start? Don’t worry! Here, we’ll take you through what you need to do in order to watch Scotland v Samoa live online for free.

Here’s how to watch Scotland v Samoa online for free from anywhere:

We recommend that you test your VPN with ITV Hub (ideally via one of the platform’s live streams) in advance of the Scotland v Samoa match. That gives you time to contact your VPN’s customer support service and resolve any potential issues.

All of the Rugby World Cup 2019 matches are available for free, live on ITV Hub. The Scotland v Samoa match will be shown on ITV with coverage starting at 10:30 AM BST. To watch online, you’ll have to create an ITV account. This doesn’t cost anything, though, and should only take a few seconds.

Keep in mind that ITV Hub is a region-locked platform and only available in the UK. This means you’ll need a UK IP address in order to watch it. By using a VPN to connect to a server in the UK, you’ll be able to unblock ITV Hub even if you’re abroad. In fact, ExpressVPN comes with a 30-day money-back guarantee. As such, you can try it out with ITV Hub risk-free and receive a full refund if you’re not satisfied.

Where else can I watch Scotland v Samoa live online?

Eir Sport holds the 2019 Rugby World Cup broadcasting rights in Ireland. It’s broadcasting all 48 games, including Scotland v Samoa. These are available to live stream via the Eir Sport app. If you’re already an Eir broadband customer, you can watch all of the matches for free at no extra cost. Unfortunately, the only other way to watch Eir Sport is to purchase an Eir Sport subscription via Sky TV for €29.99 monthly or €299 annually.

RTÉ is broadcasting some Rugby World Cup 2019 games online free via RTÉ Player but this doesn’t include Scotland v Samoa. However, RTÉ will be showing the knockout stages. Should Scotland or Samoa qualify for the knockout stages, you’ll, therefore, have another way to watch the games online for free. The content of both Eir Sport and RTÉ is geo-restricted so a VPN and Irish IP address is required if you’re trying to watch from abroad.

All 48 Rugby World Cup 2019 games including Scotland v Samoa will be available on NBC Sports Gold. You can watch the entire competition by purchasing a Rugby World Cup Pass for $199 USD. However, there’s also the option to buy this game on its own for $29.99. Regardless of which option you choose, you’ll need a VPN if you’re outside the US. The reason for this is that NBC Sports Gold is geo-blocked and requires you have a US IP address.

Fox Sports will be broadcasting the Scotland v Samoa match. If you already have a Foxtel TV subscription, you’ll be able to watch online via the Foxtel Go app. However, there’s also the option of Foxtel Now which is a standalone service that doesn’t require the commitment of a regular Foxtel subscription.

One advantage of Foxtel Now is that it comes with a 10-day free trial (after which it costs $25 AUD per month for the base subscription plus a further $29 monthly for the sports package. Foxtel is only available in Australia which means you’ll need to have an Australian IP address in order to live stream their content.

Can I use a free VPN to watch Scotland v Samoa online?

The trouble with free VPNs is that they’re notoriously unreliable at unblocking geo-restricted websites and services. We cannot guarantee that the free VPN you use will unblock ITV Hub. Furthermore, free VPN services tend to have very few servers. Too many users causes high server loads, resulting in lag and buffering when browsing and streaming. As such, there’s a real risk that using a free VPN will result in you missing out on Scotland v Samoa.

It’s also important to exercise caution when it comes to your online security. Many free VPNs simply don’t protect your privacy. They may lack encryption or protection from data leaks, for example. After all, free VPNs are a business. They often make money by logging your browsing data and selling the information without your knowledge. That’s why we recommend using a VPN that follows a strict no-logs policy.

What should I know about the Scotland v Samoa Rugby World Cup match?

Scotland and Samoa have played each other on a total of 11 occasions with Scotland winning nine times and Samoa once (there was one draw between the two teams). The last time Scotland and Samoa met was in November 2017 in the Autumn International. On that occasion, Scotland won 44-38.

While Scotland’s opening Rugby World Cup 2019 fixture was a heavy 27-3 loss to Ireland, they remain the favorites to win this game. However, Samoa have made a positive start to the competition, beating Russia 34-9. Scotland are ranked 8th in the world and progressed to the semi-finals of the Rugby World Cup in 1991. Samoa are ranked 16th and made it to the quarter-finals in 1991 and 1995.