How to watch Sosa vs. Rhodes live online from anywhere

Looking to live stream the Sosa vs. Rhodes fight online? We’ll explain when the match is, what happened to Frampton vs. Dominguez, and how to watch Sosa vs. Rhodes without cable, from abroad, using a Virtual Private Network (VPN).
Ian Garland Streaming, Kodi and VPN Expert 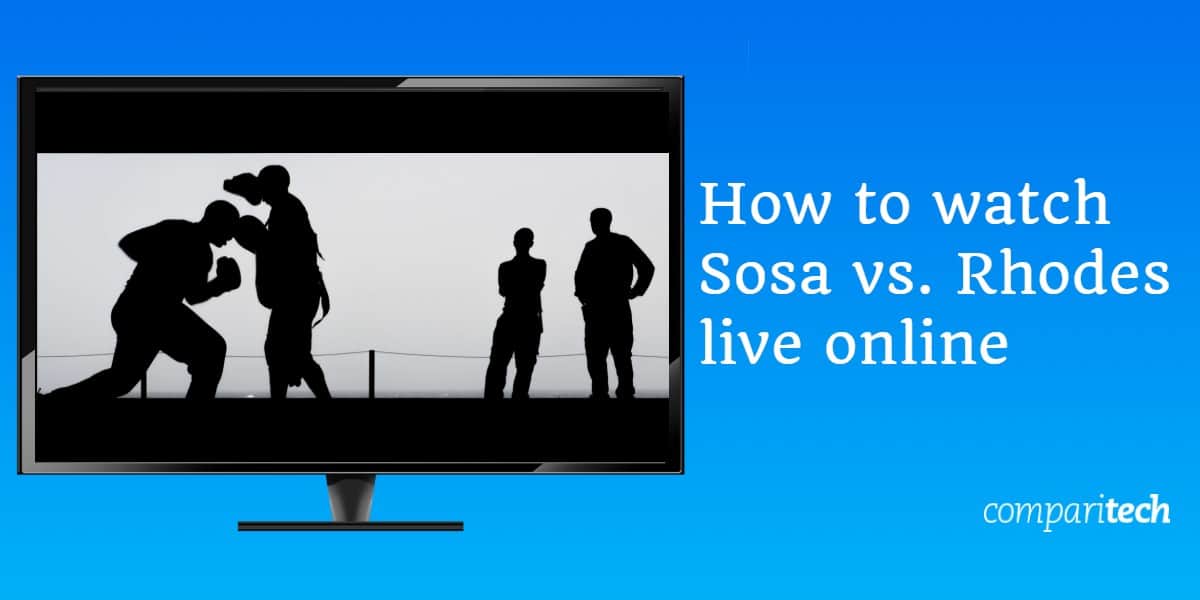 Jason Sosa will face Haskell Lydell Rhodes at the Liacouras Center in Pennsylvania on August 10. The preliminary fights will begin at 6:30 PM EST (3:30 PM PST / 11:30 PM BST) with the main event taking place at around 8 PM. This fight was originally intended to be between Carl Frampton and Emmanuel Dominguez, but Frampton had to withdraw after an ornament fell on him, breaking his hand. Nevertheless, there’s plenty for boxing fans to look forward to, and below, we’ll let you know how to stream Sosa vs. Rhodes online without cable.

Note that we’ll only be recommending official Sosa vs. Rhodes broadcasters. While unlicensed streams of high-profile boxing matches are often available, we don’t recommend using them. The video is often laggy and low-resolution, to begin with, and there’s always a chance that the stream could be taken offline for copyright violation partway through. It’s pretty simple to watch Sosa vs. Rhodes online, though, so there’s really no reason to use unreliable, unauthorized streams.

This fight will only be shown on geo-blocked platforms. As such, you’ll need a VPN to live stream Sosa vs. Rhodes if you’re outside of the US or the UK.

How to watch Sosa vs. Rhodes abroad with a VPN

With the right VPN, it’s very easy to access region-locked streaming services. Follow the steps below to unblock and stream Sosa vs. Rhodes online from abroad:

This event will be broadcast live so we strongly recommend making sure your VPN works well before the Sosa vs. Rhodes fight begins. This way, if you run into any problems, you’ll still have time to get help from your VPN’s customer support team.

VPNs encrypt your traffic, preventing your Internet Service Provider (or anyone else) from seeing what you get up to online. However, they also allow you to change your IP address and bypass regional restrictions so you can use geo-blocked services abroad. We recommend ExpressVPN: it’s a fast, security-conscious service with excellent unblocking ability and over 3,000 servers in 94 countries.

Getting started with ExpressVPN only takes a few minutes. All you have to do is choose your desired subscription length (one, six, or twelve months) and pay. You can even pay in Bitcoin if you’d like, although as ExpressVPN doesn’t log any personally identifiable information, you can’t be traced either way. ExpressVPN includes a risk-free 30-day money-back guarantee, so if you’re unsatisfied or only needed a VPN to watch Sosa vs. Rhodes abroad, you can just cancel and claim a full refund.

BEST VPN FOR STREAMING SPORTS:ExpressVPN is perfect for streaming Sosa vs. Rhodes abroad. It’s very fast, unblocks platforms like ESPN+ with ease, and puts major emphasis on your online security and privacy.

How to watch Sosa vs. Rhodes live on US TV

American fans can watch Sosa vs. Rhodes and all of the undercard fights exclusively on ESPN+. Unfortunately, there’s no way to watch this event for free as it won’t be shown on traditional TV and ESPN+ recently got rid of its trial period. However, a monthly ESPN+ subscription is only $4.99 USD, which is pretty good value considering passes for certain pay-per-view fights regularly cost $40 or more.

ESPN+ is region-locked and only available in the US. Additionally, this service requires your payment method to be linked to an American address, so it’s almost impossible for foreign users to sign up. Subscribers who are in other countries can still use the service as normal by connecting to a US VPN server, though.

How to live stream Sosa vs. Rhodes on UK TV

BT Sports is the only network showing this fight in the UK. If these channels are already included as part of your cable TV package, you can stream Sosa vs. Rhodes online at no added cost. As this broadcaster doesn’t offer any kind of online pass, it’s not possible to watch Sosa vs. Rhodes without cable in the UK.

Existing BT TV customers can add the sports channels for an extra £6 per month, but if you’re with a different cable provider, you can expect the price to increase dramatically: it’s £25 per month for Sky customers and £29.99 for TalkTalk customers, plus a £20 activation fee. Things are even worse if you’re with Virgin Media as BT Sports is only included in the more expensive channel packs, which start at £53 per month. To add insult to injury, whichever option you choose, you’ll be locked into a 12-month contract.

BT Sports is only available in the UK. If you’re abroad, you can still log in and use the service by connecting to a British VPN server first.

These fighters are pretty well-matched, so it’s anyone’s guess which of them will actually win. Rhodes has a slight reach advantage (69.5” vs. Sosa’s 67”) and a few more professional fights under his belt. On the other hand, Sosa is known for his ability to get in close and end fights in the early rounds. That’s not to say he can’t go the distance if required; in 2016, he beat the previous WBA Super Featherweight champion, Javier Fortuna, in the eleventh round.

We can expect Rhodes to fight defensively here, hitting from a distance and trying to stop Sosa from landing his famously powerful punches. However, this won’t be enough to score a win by decision, so he’ll likely have to close the gap sooner or later. Whoever wins, this is sure to be a hard-fought, memorable match.