How to watch AEW Full Gear 2020 live online from anywhere

Looking forward to the next All Elite Wrestling event? We’ll get you up to speed on everything you need to know about the upcoming Full Gear 2020 pay-per-view, including what time it starts, who’s fighting, and how you can watch AEW Full Gear online from anywhere.
Ian Garland Streaming, Kodi and VPN Expert 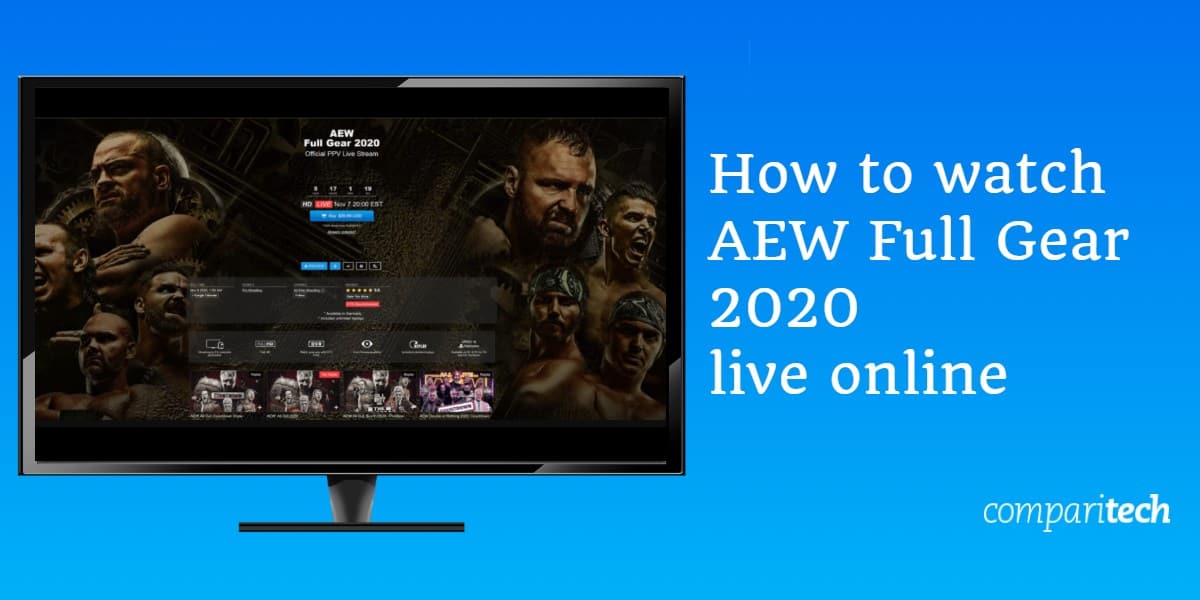 This year’s Full Gear event will take place on November 7 at 8 PM EST (5PM PST / 1 AM GMT). It’s set to be an incredible evening, with four championships on the line and a match that’ll decide whether Adam Page or Kenny Omega gets a shot at the World Championship. Below, we’ll let you know how to stream every Full Gear 2020 fight online, even if you’re abroad.

We strongly advise against using unofficial sources to stream Full Gear 2020. To begin with, these are extremely unreliable and could be taken offline at any moment, leaving you unsure of who actually won a given match. Further, third-party streams often only have laggy, low-quality video, so they’re far from the best way to watch. On the plus side, it’s actually quite easy to watch AEW Full Gear 2020 online, so there’s no need to use unauthorized streams.

All Elite Wrestling Full Gear will be shown exclusively on geo-restricted streaming platforms. As such, you’ll likely need a Virtual Private Network (VPN) to watch on your usual home services while traveling abroad.

How to stream AEW Full Gear from anywhere with a VPN

VPNs improve your digital security by encrypting your data, but they also route it through a server elsewhere in the world. This makes it easy to spoof your location and access region-locked platforms while traveling. It’s much less complicated than it sounds; just follow the steps below to unblock and stream AEW Full Gear abroad.

Here’s how to watch AEW Full Gear online from anywhere:

Streaming services update their VPN detection features all the time. Unfortunately, this adds a degree of uncertainty to any live event, since there’s no guarantee your VPN will actually work properly on the night. Given that this is a pay-per-view event, it’s a good idea to take a few minutes and make sure everything is running smoothly shortly before the event begins.

Where to watch AEW Full Gear live online in the US

B/R Live remains the only way to live stream AEW PPV events in the US. Its coverage will begin at 8 PM EST (5 PM PST) although replays will be available within 24 hours in case something comes up and you can’t watch Full Gear live. Although this service usually makes pay-per-view events free to watch eventually, this can take a couple of months.

Users can watch all of the action in either English or Spanish. However, there isn’t a toggle on the actual video itself; instead, you’ll have to purchase a pass that offers commentary in your preferred language. There’s no price difference at least, with each pass costing $49.99 USD.

B/R Live is region-locked and only available in North America. That said, you can access it while traveling abroad by connecting to a VPN server in the US or Canada. Don’t have a VPN yet? ExpressVPN comes with a 30-day money-back guarantee, meaning you can try it risk-free. If you’re unsatisfied or only needed it to watch this one event, just cancel to claim a full refund.

Can I live stream AEW Full Gear 2020 outside of the US?

As with previous AEW events, Fite will be airing Full Gear internationally. This service will allow you to watch in over a dozen countries including the UK, France, Germany, Spain, Japan, and Brazil. Commentary will be available in English, Spanish, French, and German, although you’ll have to make sure you purchase the event pass that offers coverage in your preferred language.

In most locations, you can expect to pay $19.99 USD for a Full Gear 2020 pass.This works out at around £15 or €17. While Canadian users used to be able to pay less on Fite than on B/R Live, this is no longer the case; if the service notices that your IP address appears to be coming from Canada, it’ll change the price to $49.99 USD.

Fite is geo-restricted and may not be available where you are. However, you can still access it from abroad by connecting to a VPN server in a supported country.

Well, where should we begin? This year’s Full Gear event is packed with interesting matchups! The obvious highlight is the final of the Eliminator Tournament. Once again, AEW poster boy Kenny Omega and Adam Page are butting heads, but this time, there are genuine stakes. Jon Moxley has a shot at the AEW World Championship, and his win over Omega at the 2019 Full Gear is still fresh in everyone’s minds; we could be in for a fantastic revenge storyline in the months to come if Eddie Kingston and Adam Page lose on November 7.

And then there’s MJF, the wrestler the fans all love to hate. He’s been trying week in, week out, to get into the Inner Circle stable and finally, has been given a shot. However, he’ll have to beat stable member Chris Jericho first. This is a true battle of old vs new. Jericho is an industry legend with more than a decade of WWE experience under his belt, while MJF debuted in 2015 and has really only seen widespread fame after his move to AEW. Whoever wins, it’s sure to be a match we won’t soon forget.