Looking to stream the 2021 Australian Open? We’ll let you know how to watch the men’s semi-finals match (Karatsev vs Djokovic) live online, for free, from anywhere in the world.
Ian Garland Streaming, Kodi and VPN Expert 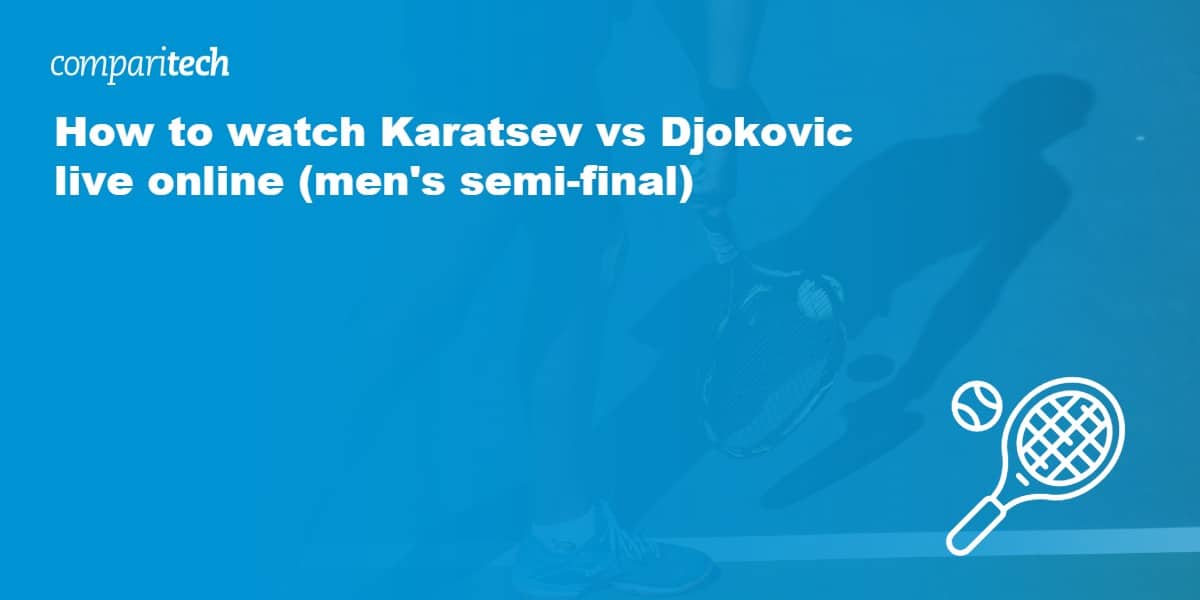 Aslan Karatsev and Novak Djokovic will go head-to-head in the men’s semi-finals on February 18. There’s no definitive start time as yet, but we know that it’ll be during the evening session, and as such, the match won’t begin before 6 PM AET (2 AM EST / 11 PM PST / 7 AM GMT). These are two of the most driven players in the sport, so we could well be in for a lengthy match. Take a look below to find out how you can follow all of the action online.

Although this event will almost certainly have third-party streams available, we strongly recommend sticking to official sources. First, this ensures the stream won’t be taken offline at a critical moment. Second, it guarantees you’re watching in the highest possible quality. Given that there are so many legitimate ways to watch the Australian Open online (many of them free), there’s no reason to resort to shady and unreliable sources.

The 2022 Australian Open will only be broadcast on geo-restricted streaming platforms. This means that if you’re traveling and hoping to watch on the same services you would back home, you’ll have to connect to a Virtual Private Network (VPN).

How to live stream Karatsev vs Djokovic online from anywhere

VPNs work by sending your data through servers in another country. This allows you to spoof your location and access your usual geo-blocked services while traveling abroad. Best of all, these services are easier to use than you might think.

Here’s how to watch the Australian Open (Men’s semi-final) online from anywhere:

Like every Australian Open fixture, Karatsev vs Djokovic will air live. For this reason, it’s a good idea to try your VPN out ahead of time and make sure that everything is working properly before the match actually begins. This way, if anything goes wrong, you’ll have plenty of time to get help from your VPN’s customer support team and won’t have to miss a second of the match.

There are two networks showing the Australian Open men’s semi-finals: ESPN and The Tennis Channel. However, The Tennis Channel charges $109.99 USD per year to watch online, and there’s no monthly payment option, making it a poor way to watch.

ESPN, on the other hand, allows you to sign in with your cable provider details and watch at no added cost. It also lets you log in with a Sling TV, fuboTV, Hulu, YouTube TV, or AT&T TV Now account. This is particularly helpful, since each of these services offers a free trial period (usually one week). As such, you can simply sign up, stream the remainder of the Australian Open for free, and cancel before your payment method is charged.

Unfortunately, ESPN and The Tennis Channel are only showing Karatsev vs Djokovic in the US. If you’re elsewhere in the world, you’ll have to connect to a VPN to use these services. Don’t have a VPN yet? NordVPN comes with a 30-day money-back guarantee, meaning you can try it completely risk-free. If you’re unsatisfied, just cancel at any time to receive a full refund.

How else can I watch Karatsev vs Djokovic live online?

The Australian Open is one of tennis’ most prestigious tournaments, so naturally, it’ll be broadcast live in several countries around the world. Below, we’ll let you know which networks are showing the men’s semi-finals where you are:

Eurosport has exclusive broadcasting rights to the Australian Open in the UK. In addition to showing each match live, it’ll allow you to switch between several cameras and stream the matches on-demand once they’ve ended.

Unfortunately, this service doesn’t offer any kind of trial period. Normally, a premium subscription would cost £6.99 per month. However, if you sign up before February 21 (which is when the tournament ends), you can get a month’s access for just £0.99. Just remember to cancel within 30 days, since this will automatically renew at the usual price.

Eurosport changes its content depending on your location. As such, if you’re outside of the UK, you’ll have to connect to a UK VPN server to stream the Australian Open on this service.

Australian tennis fans have it easy: every single fixture will be shown on Channel 9. This means that you can stream Karatsev vs Djokovic live or on-demand via 9Now. This service is completely free to use, although you will have to create an account before you can watch anything. Still, this only takes a second and just requires you to enter some basic information including your name and an Australian ZIP code (any will do).

9Now is usually only available in Australia. However, it’s possible to use it from abroad by connecting to VPN.

There are different Australian Open broadcasters in Canada, depending on which language you’d like to watch in. English speakers can stream every fixture on TSN, whereas those looking for French-language commentary can use RDS instead. There’s no need to worry about missing out based on your choice: both networks have the exact same coverage and price, at $7.99 CAD per day or $19.99 per month. Unfortunately, there’s no free trial available.

TSN and RDS are geo-restricted and should only be accessible to users in Canada. That said, a VPN allows you to use these services as normal, even while abroad.

Didn’t see your country above? Don’t worry: the 2021 Australian Open will be shown live in dozens of countries around the world. Luckily, the tournament’s website has a complete list of international broadcasters you can consult to see who’s showing the matches where you are.

Karatsev vs Djokovic: who is most likely to win?

This matchup is more difficult to call than you might expect, not least of all because these two have never gone head-to-head before. Karatsev is in uncharted waters here, having never come further than the second qualifying round at the Australian Open before.

In contrast, Djokovic is in his element, with eight wins at this tournament alone. However, he’s not in peak form this year. He’s currently suffering from an abdominal injury, and publicly acknowledged that his match against Zverev might make the problem even worse. Nevertheless, he’s a veteran of the sport, and should be able to hold his own against a relatively untested opponent. Then again, who knows? We’ll just have to tune in to see what happens.