Want to make sure you don't miss any of the Australian Open women's singles action? Find out how to watch Muchova vs Brady from abroad using a VPN.
Aimee O'Driscoll VPN AND CYBERSECURITY EXPERT 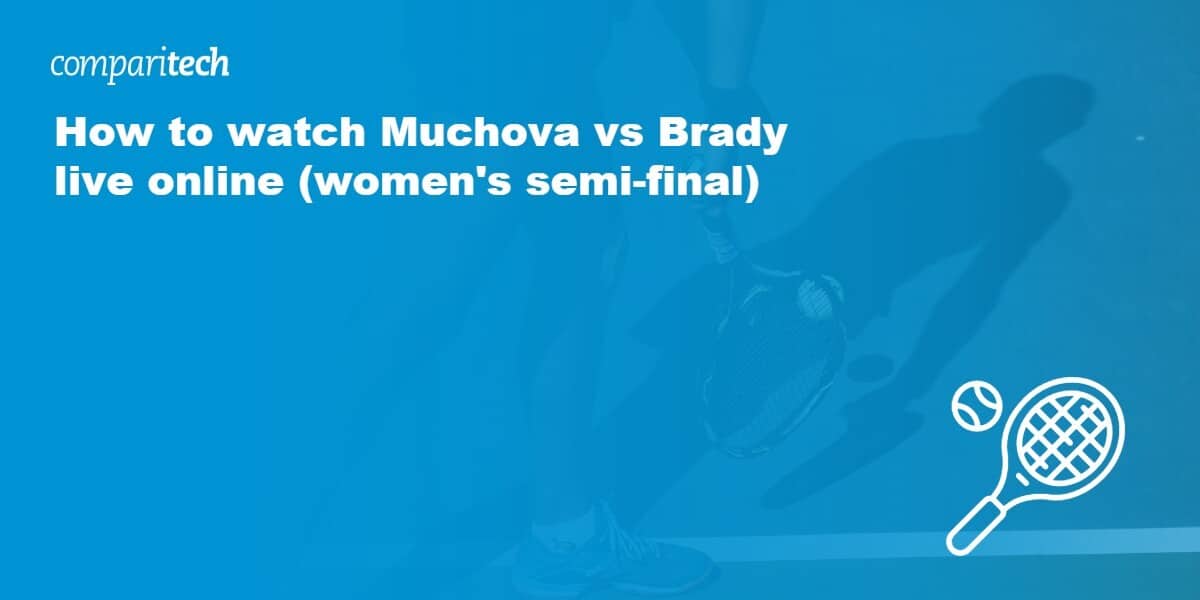 We’ve already seen lots of action from the Australian Open women’s singles tournament, but it’s not over yet. The second of the two matches will take place on February 18 (February 17 in some locations with the time difference) at 3:15 pm AEDT (4:15 am GMT / 11:15 pm EST). Note that time is subject to change. Of course, most people won’t be able to attend the match in person, but there are plenty of ways to watch from home. Below, we explain how to live stream Muchova vs Brady abroad from anywhere using a VPN.

We’ll only be recommending licensed broadcasts; unofficial streams are usually poor quality and likely to be taken down partway through the match. With ways to watch for free in many regions, your best bet is to opt for an official channel.

Online services broadcasting this match will likely be geo-restricted. As such, you’ll need a VPN to access your regular services while traveling abroad.

Streaming services often restrict content based on where you’re located, and they usually detect your location by examining your IP address. Connecting to a Virtual Private Network (VPN) sends your traffic through a secondary server, the location which is your choice. When you visit a website, it sees the VPN IP address instead of yours, enabling you to spoof your location and unblock restricted content.

While this sounds quite complicated, using a VPN is straightforward. See the simple steps below.

How to live stream Muchova vs Brady online free, from anywhere:

Ideally, this works seamlessly, but there are issues that can occur. As such, it’s a good idea to test the stream ahead of time so you can troubleshoot any issues.

Australians definitely won’t have to miss any action as all Australian Open matches can be streamed for free. Channel Nine has the rights to broadcast the tournament and will air them live online via 9Now. You’ll have to create an account which involves entering an Australian postal code, but any one will work.

However, 9Now is geo-restricted and only available to those with an Australian IP address. If you’re outside the country, you can use a VPN to make it look like you’re in Australia.

Need a VPN? NordVPN is our top choice for streaming as it’s extremely fast and unblocks a ton of content. Plus it comes with a 30-day no-fuss money-back guarantee. This means you can use NordVPN to live stream the remaining Australian Open matches and then ask for a refund if you don’t wish to continue using the service.

Where else can I watch Muchova vs Brady online?

With it being one of the few Grand Slam tournaments, you can expect global coverage. Here’s how to watch in various locations:

ESPN has rights to air Australian Open matches in the US. You can either stream them online through ESPN+ or via the ESPN mobile app. If ESPN is part of your cable package, you can just log in with your provider credentials.

ESPN is also available as a standalone service, costing $5.99 per month or $59.99 per year. Another option is to stream ESPN through an over-the-top service such as Sling TV or Fubo TV. These usually offer free trial periods so you can actually watch the remaining matches for free.

One more option is The Tennis Channel which will be covering all Australian Open matches. You can log into online streams using your cable provider credentials (if this channel is included in your plan).

The services mentioned above are geo-restricted to the US, but they’re accessible from abroad if you connect to a US VPN server.

Viewers in Canada can watch all Australian Open matches on TSN (English-language commentary) or RDS (French-language).  These channels both have online streams (through TSN Direct and RDS Direct) and mobile apps (TSN Go and RDS Go).

If you have one of these channels included in your cable plan, you can simply use your provider credentials to log in. If not, you can purchase a standalone plan. These cost $4.99 CAD for a day pass or $19.99 CAD for a month.

Both TSN and RDS are geo-restricted, which means you’ll need a Canadian IP address to access online content. If you’re traveling outside Canada, you can use a VPN.

Over in the UK, Eurosport has rights to broadcast Australian Open matches, including Muchova vs Brady. To view online, you can log into Eurosport Player using your cable provider credentials (assuming this channel is included in your plan).

If not, you can purchase Eurosport Player as a standalone service. It costs £6.99 per month or £39.99 per year. However, a current special offer means you can get a one-month trial for only £0.99.

You can only access Eurosport Player from a European country, unless you use a VPN to spoof your location.

While we can’t cover every region in this post, there are lots more Australian Open viewing options across the globe. To find out which broadcaster will be showing matches where you live, you can visit the official Australian Open site.

Muchova vs Brady: who will win?

This match is a tough one to call as both players have surprised fans by making it this far in the tournament. Plus they’re matched fairly evenly in terms of rankings with Muchova ranked at 27 and Brady at 24 in the current WTA ratings.

The Czech Republic’s Karolina Muchova caused the biggest upset by ousting number one seed Ashleigh Barty in the quarter-finals.  Barty had been suffering from a thigh injury which caused her to forfeit her second-round doubles match. Barty breezed through the first set beating Muchova 6-1, but Muchova came back with convincing 6-3 and 6-2 wins in the second and third. The set she lost to Barty was the first she dropped in the whole tournament.

The US’s Jennifer Brady had a similar road to the semi-finals, dropping the first set of her quarter-final match. Although, her opponent was the unseeded Jessica Pegula, so the win wasn’t a surprise.

Neither player has won a Grand Slam title, so both will be eager to make it to the final to test their skills against Naomi Osaka or Serena Williams. Whatever the outcome, this will no doubt be a hard-fought battle.