Want to catch all the action of the Australian Open women’s semi-final matches? We explain how to live stream Osaka vs Williams from anywhere using a VPN.
Aimee O'Driscoll VPN AND CYBERSECURITY EXPERT 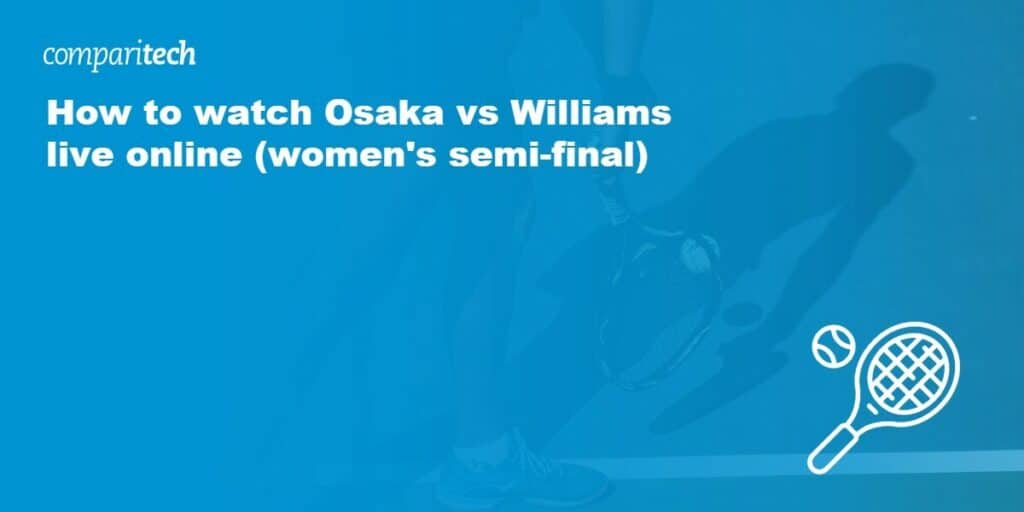 We’ve already seen a few upsets in the Australian Open women’s singles tournament, so the semi-finals are set to provide some excitement. The first of the two matches will take place on February 18 (February 17 in some countries due to the time difference) at 2:00 pm AEDT (3:00 am GMT / 10:00 pm EST). Note that the time is subject to change. World number three Naomi Osaka will take on 11th-ranked Serena Williams. Not to worry if you can’t be there to watch the match in person. Below, we explain how to live stream Osaka vs Williams online from anywhere in the world.

Note that we’ll only recommend official streams. There are typically lots of unlicensed broadcasts available for matches such as these, but they’re generally not good options. They are usually of poor quality and likely to be cut short partway through the match. With free streams available, it doesn’t make sense to go for the unofficial options anyway.

Most of the platforms broadcasting the Australian Open are geo-restricted. To gain access to your regular services while abroad, you’ll need to use a VPN.

How to watch Osaka vs Williams abroad for free

A Virtual Private Network (VPN) is a handy tool that encrypts all the information flowing to and from your device. Your internet traffic is sent through an intermediary server that you get to choose the location of. Your real IP address is replaced with that of the VPN server making it appear to websites that you’re in a different location. By spoofing your location, you can unblock your regular content from back home even while traveling abroad.

It all sounds a bit complex, but using a VPN is really very simple. Just follow the steps below.

How to watch Osaka vs Williams online (free) from anywhere:

We recommend testing your stream prior to the match start time in case of any problems. This way you’ll have time to contact your VPN customer support team to troubleshoot if needed.

In Australia, Channel Nine (The Nine Network) has the rights to show all Australian Open matches. Online streams are available on 9Now. You’ll need an account, but setting one up is free. You just have to provide an Australian postal code, but any will work.

9Now geo-restricts content so it’s only available in Australia. Anyone outside the country can watch by connecting to an Australian VPN server. If you’re not already subscribed to a VPN, we recommend NordVPN. It’s one of the best-performing providers in our speed tests and is great at unblocking restricted content. Plus it offers a 30-day money-back guarantee. This means you can use it watch the remaining Australian Open matches and then get your money back if you decide you don’t want to keep your subscription.

Where else can I watch Osaka vs Williams online?

The Australian Open is a hugely popular Grand Slam tournament with fans watching from across the globe. As such, you can expect coverage in most regions. Find out how to watch depending on where you are.

US tennis fans can tune in to ESPN to watch Osaka vs Williams. Live streams are available on ESPN+ or the ESPN mobile app. If you have ESPN included in your cable package, you can simply log in with your provider credentials.

If not, there are some over-the-top services that include ESPN in their plans, including Sling TV and Fubo TV. These often offer free trial periods, so you may be able to watch the remaining matches at no cost.

Your other option is to buy a standalone ESPN subscription. There’s no free trial, unfortunately, so you’ll need to pay $5.99 for a one-month pass or $59.99 for an annual subscription.

The services above are geo-restricted so are usually inaccessible from outside the US. If you’re traveling abroad, you can access them by connecting to a US VPN server first.

Looking to watch on Canadian services? TSN and RDS (French-language) have rights to broadcast Australian Open matches. You can view live streams online through TSN Direct and RDS Direct or via the TSN Go and RDS Go mobile apps.

If your chosen service is available in your cable package, you can log in online using your provider credentials. Alternatively, TSN and RDS are available as standalone services. They each cost $7.99 CAD for a day pass or $19.99 CAD for a monthly pass.

Both TSN and RDS are geo-restricted to Canada, but you can use a Canadian VPN server to access them from abroad.

Eurosport is showing Australian Open matches in the UK and other parts of Europe. To watch Osaka vs Williams online, you can use Eurosport Player. If this channel is included in your cable package, use your provider details to log in.

The other option is to purchase a pass. Monthly passes usually cost £6.99 while an annual pass will set you back £39.99. However, a current special offer lets you get your first month for just £0.99 if you sign up before February 21. Just remember to cancel before the trial period is up to avoid being charged the full price for subsequent months.

Eurosport Player is a restricted service and only available in Europe. You can use a VPN to access it from abroad.

The Australian Open is a hugely popular Grand Slam tournament, so it’s no surprise that fans from all over the world want to watch the action. If we haven’t covered your country above, you can check out the full list of broadcasters on the Australian Open site.

Naomi Osaka is currently ranked number three in the world. With Serena Williams ranked number 11, Osaka is the clear favorite to win. Indeed, Osaka has been tipped to win the entire tournament.

Osaka breezed into the semi-finals, beating Su-wei Hsieh in straight sets. That said, Williams performed similarly well, beating number two seed Simona Halep in two sets. In fact, she has only dropped a single set in the tournament so far, as has Osaka.

At the age of just 23, Osaka already has three Grand Slam titles under her belt. Although, she does lack the lengthy experience of Williams who has achieved the incredible feat of 23 singles titles. This pair has only met in a Grand Slam once before, with Osaka coming out on top to clinch the 2018 US Open title. But with Williams hungry for her elusive 24th Grand Slam win (which will see her breaking a record for the number of singles titles), this really could go either way.