Looking to stream the Women’s World Cup final live online? We’ll explain how watch the USA vs. the Netherlands for free, from anywhere in the world, using a Virtual Private Network (VPN).
Ian Garland Streaming, Kodi and VPN Expert 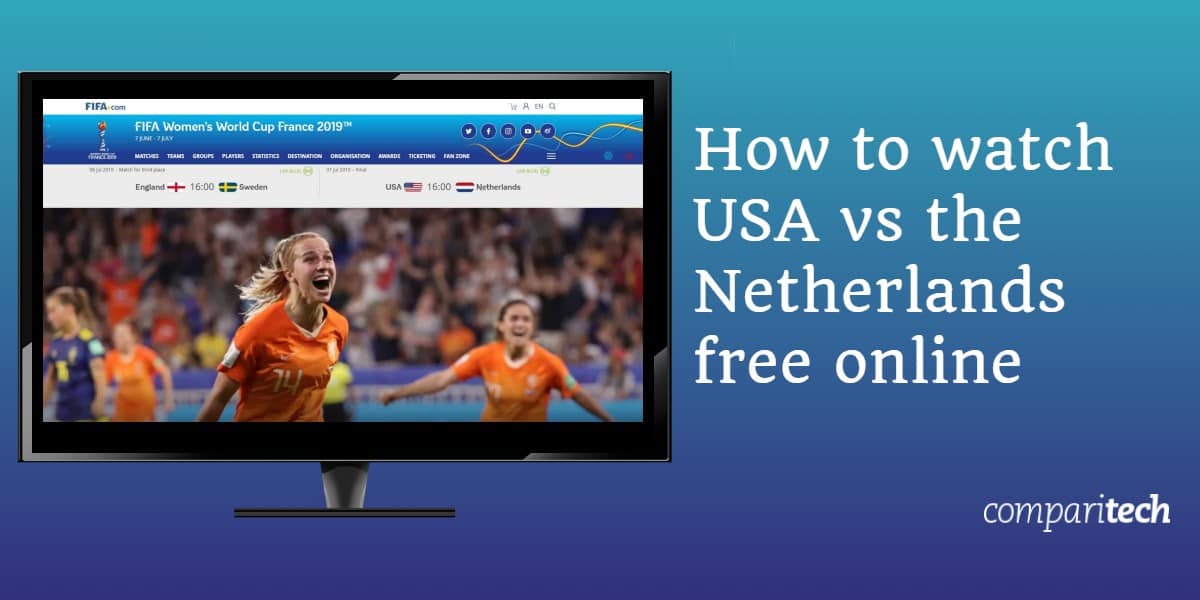 The 2019 Women’s World Cup final will take place on July 7 at 5 PM CEST (4 PM BST / 8 AM PST / 11 AM EST) in the famous Parc Olympique Lyonnais stadium. Will the USA team, the favorite, take home the trophy, or will we see the Dutch underdogs pull off a surprise upset? The only way to find out is to watch, and below, we’ll let you know exactly how to live stream the USA vs. Netherlands game free of charge.

It’s important to note that we’ll only be recommending official sources. This is a huge sporting event, and as such, there will likely be unauthorized live streams available. However, these tend to have laggy, low-resolution video, and can be taken down at any time for copyright violation. Numerous platforms around the world will allow you to watch the Women’s World Cup final for free anyway, so there’s no need to use shady, unreliable streams.

The USA vs. Netherlands match will only be shown on region-locked platforms. As such, you’ll need a VPN to watch it from abroad.

How to watch the USA vs. the Netherlands abroad with a VPN

Never used a VPN before? It’s actually pretty easy to unblock and stream the USA vs. the Netherlands abroad. Just follow the steps below:

The 2019 Women’s World Cup final will be broadcast live around the world, which is why it’s so important to make sure your VPN works well before kickoff. This approach ensures that if you run into any unexpected problems, you’ll still have time to get help from your VPN’s customer support team and might not have to miss the start of what’s sure to be a very exciting match.

How to live stream the USA vs. the Netherlands for free on UK TV

Soccer fans in the UK can watch the Women’s World Cup final between the USA and the Netherlands for free on BBC iPlayer. This streaming service is completely free to use, although you will have to create an account before you can watch anything. Note: while you’re asked to enter a postal code during registration, this isn’t used to verify your location, and you’re free to enter any British postal code.

As this match will be broadcast simultaneously online and on traditional TV, British law requires you to have a TV license in order to watch. However, BBC iPlayer doesn’t actually check whether you have a license or not, and instead, relies entirely on an honor system.

BBC iPlayer is region-locked, meaning you’ll have to be in the UK or connected to a British VPN server to use it. Still don’t have a VPN? ExpressVPN comes with a 30-day money-back guarantee, so you can stream the USA vs. Netherlands game risk-free. If you’re unsatisfied or don’t need a VPN afterwards, simply cancel and claim a full refund.

Where else can I stream the USA vs. the Netherlands match live online?

Understandably, there’s huge international interest in the Women’s World Cup final. Take a look below to find out which networks are showing USA vs. Netherlands in your country:

Fox Sports is the only network showing the USA vs. the Netherlands fixture in the US. If your cable TV package already includes these channels, you can simply sign in to the Fox Sports website and stream the final live at no added cost.

Don’t worry if you don’t have cable as there are plenty of over-the-top services that will allow you to stream this game for free. Currently, Hulu with Live TV, DirecTV Now, Sling TV, fuboTV, PlayStation Vue, and YouTube TV all let you watch Fox Sports live. Better still, each of these services comes with a free trial, meaning if you remember to cancel in time, you can effectively watch the Women’s World Cup final for free.

The streaming platforms above are only available within the US. However, you can still access them from abroad by connecting to an American VPN server.

Canadian fans can stream the USA vs. the Netherlands match on three separate channels. CTV and TSN are both showing the game in English, while RDS will provide French-language coverage. All three networks have their own online streaming service, so if any of these channels are included in your cable TV package, you’ll be able to log in to the respective website and watch this game for free.

You can also watch the FIFA Women’s World Cup final without cable. While neither TSN nor RDS offer a free trial, they do allow you to purchase a day pass instead of signing up for a full month. Daily passes cost $4.99 CAD each, and you can watch as many events as you like during this time.

CTV, RDS, and TSN are all geo-restricted. Canadians in other countries can access these services as normal when abroad by using a VPN.

It’s very easy to watch this match in Australia as SBS is broadcasting the Netherlands vs. the USA live and completely free. This live coverage will be available on both The World Game website and Freeview, neither of which require you to create an account.

Optus Sport will be showing the World Cup final, but as its monthly subscriptions cost $14.99 AUD each, and other networks are providing free coverage, there’s not really any point in signing up for this one event. Existing customers can log in and watch the game at no added cost, though.

Both SBS and Optus Sport are geo-restricted. As such, you’ll need a VPN to use them from outside of Australia.

The Women’s World Cup final will be available live on NPO1. This service is completely free and doesn’t require you to create an account, but only offers Dutch-language content. Further, there is no option to display foreign-language subtitles.

NPO is only available in the Netherlands. To access it abroad, you’ll have to connect to a Dutch VPN server.

The USA vs. Netherlands match will be shown live on both TF1 and Canal+. Canal+ costs €6.99 per month but comes with a one-month trial, but we’d recommend using TF1 instead, simply because it allows you to stream the match for free without worrying about cancelling your subscription in time. You’ll have to create a free TF1 account before you can watch anything, but this is straightforward and only takes a minute.

TF1 and Canal+ are both region-locked, so to watch them abroad, you’ll need a VPN.

Don’t worry if we haven’t covered your country above; the 2019 Women’s World Cup is showing in over 50 countries, so we can’t address each individually. You can, however, find your country’s official source in the following list of international Women’s World Cup broadcasters. If there’s no legitimate way to watch in your region, remember that you can access free streaming services from other countries (BBC iPlayer, for instance) by connecting to a VPN.

Can the Netherlands beat the USA?

This is sure to be a match for the ages: the American women’s squad are currently enjoying an 11-victory streak, while the Dutch have surprised everyone by defeating powerhouse teams like Italy, Japan, and Canada. So what can we tell about these two teams from their performance during the rest of the tournament?

The USA are the more aggressive squad by far. They have almost twice as many shots on target (49 versus the Netherlands’ 28), and seem to make better advantage of opportunities, since they have 24 goals in total, whereas the Dutch have scored just 11. The Americans also have a particularly fierce front line in Alex Morgan and Megan Rapinoe, who have 11 goals and six assists between them.

The Dutch team does have one big advantage, however: they currently have 12 players who’ve competed in every game so far. This could mean that the players have more experience working as a unit against world-class opponents. However, the US has been rotating squad members out, presumably hoping to keep everyone as well-rested as possible. Ultimately, there’s only one way to find out which approach is better, and that’s to watch the event live.