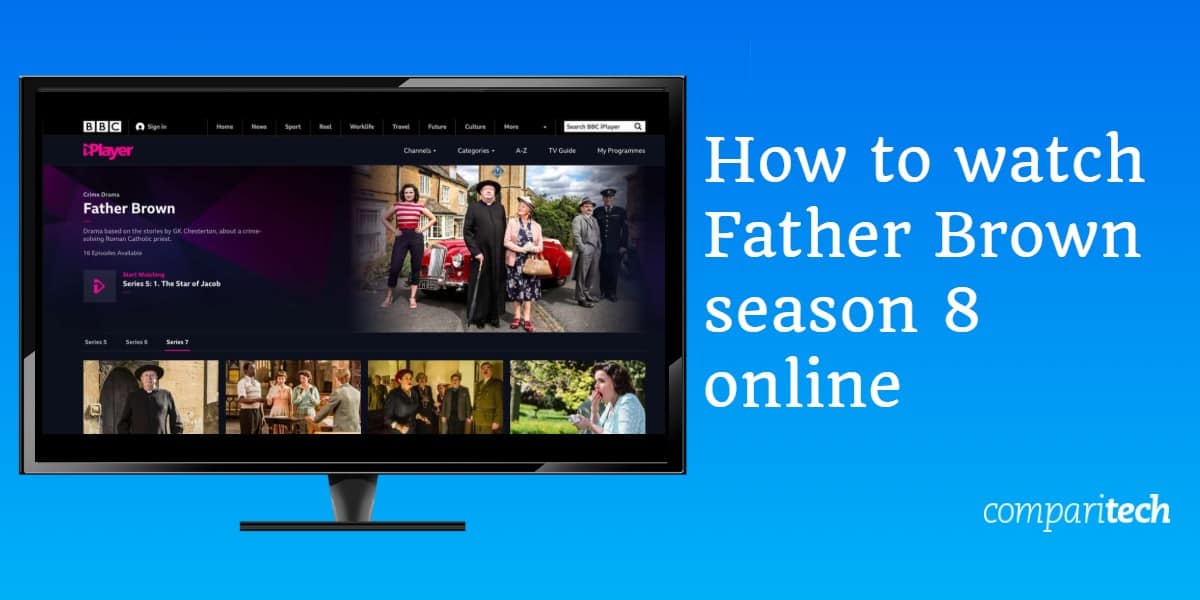 Father Brown season 8 will broadcast on January 6 at 2:15 PM GMT (9:15 AM EST / 6:15 AM PST) on BBC One and BBC iPlayer. Episodes will air every weekday for two weeks. However, it’s worth knowing that the BBC iPlayer platform is region-locked and only available in the UK. This means you’ll need a VPN in order to watch Father Brown season 8 (or any other BBC iPlayer content) abroad.

We’ll only be recommending official sources for watching Father Brown season 8. While there’s likely to be unlicensed streams, we advise against using them. In particular, unauthorized streams are typically of poor quality with low resolution and frequent lag and buffering. Furthermore, unofficial sources are often taken offline for copyright violation which may make you miss the season premiere entirely. Fortunately, you can watch Father Brown season 8 for free so you don’t need to risk such unreliable sources.

Father Brown season 8 will only be shown on geo-restricted platforms. As such, you’ll need a VPN in order to watch it if you are traveling abroad (outside the UK).

The good news is that by using a VPN, you can watch Father Brown season 8 online for free from anywhere in the world and connect you BBC iPlayer as you usually would from home. Just follow the steps below.

Father Brown season 8 will broadcast live on BBC iPlayer. By testing your VPN with BBC iPlayer in advance, you can avoid missing out due to unexpected technical problems. It also gives you enough time to contact your VPN’s customer support for further guidance if necessary.

How to live stream Father Brown season 8 on UK TV

You can live stream Father Brown season 8 on BBC iPlayer on January 6 at 2:15 PM GMT. What’s more, episodes are made available on-demand shortly following their initial broadcast. While BBC iPlayer is a free service, you will have to sign up for an account before you can watch. Contrary to popular belief, you are not asked to enter a TV license number although you will need to provide some basic personal details including your name, date of birth, and a UK postcode (any UK postal code will do).

BBC iPlayer content is region-locked and only accessible in the UK. However, the best VPNs for BBC iPlayer let you unblock its content from anywhere in the world. Simply connect to a server in the UK and you’ll get a UK IP address that lets you watch Father Brown season 8 abroad. ExpressVPN unblocks BBC iPlayer and comes with a 30-day money-back guarantee. This means you can try it risk-free and claim a full refund if you’re not satisfied

Where else can I watch Father Brown season 8 online?

While Father Brown season 8 will premiere on BBC iPlayer, we can expect episodes to come to various other streaming services in the near future. This is based on the fact that you can watch previous seasons of Father Brown in many countries worldwide. In particular, the first six seasons of Father Brown are available to watch on Netflix UK. This requires a paid subscription which is priced from £5.99 or $7.99 per month.

You can also purchase the first seven seasons of Father Brown on Amazon Prime with seasons priced from £3.99 to £7.99. This is much more cost-effective than purchasing individual episodes which are £2.49 each. Father Brown has also traditionally aired on PBS in the US and ABC in Australia. Needless to say, you’ll need a VPN to access any of these options abroad due to the geographic restrictions in place. For example, connecting to a server a server in Australia means you’ll have an Australian IP address for unblocking ABC.

What do we know about Father Brown season 8?

Season 8 of Father Brown will consist of 10 episodes, just like previous seasons. The first episode is titled “The Celestial Choir” and will air on January 6, 2020. Needless to say, we’ll see the Roman Catholic Priest Father Brown continue his crime-solving exploits. There’s more good news for fans, though; the BBC has already renewed Father Brown for a ninth season which is set to air in 2021.

Season 8 storylines will include Father Brown investigating the murder of an eccentric beekeeper and intervening when a fortune teller’s predictions threaten Mrs. McCarthy’s family reunion. Father Brown must also race to save Bunty from the hangman’s noose as she’s tried for murder.

Which cast members are returning for Father Brown season 8?