It’s been 30 years since the Banks family first appeared on our screens, and finally, they’re getting back together for a Fresh Prince of Bel-Air reunion episode. Below, we’ll explain how you can stream the Fresh Prince special online, from anywhere.
Ian Garland Streaming, Kodi and VPN Expert 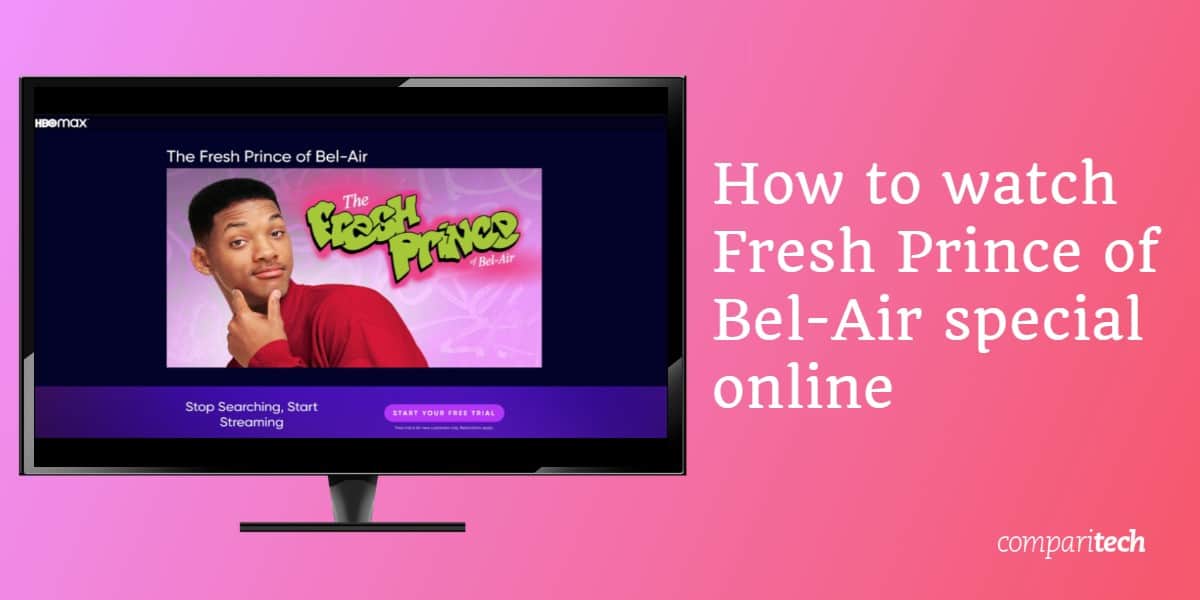 Understandably, there’s a huge amount of demand for this reunion. However, we don’t recommend watching anything other than official streams. There are several reasons for this, but here’s one of the most important: unauthorized streams are unreliable and usually have very poor video quality. Luckily, with plenty of legitimate ways to watch for free, there’s no need to compromise.

This special episode will only be shown on geo-restricted platforms. This means that if you’re traveling abroad at the moment and hoping to watch on your usual streaming services, you’ll need to use a Virtual Private Network (VPN).

Don’t be put off: using a VPN is actually far simpler than you might think.

Here’s how to watch the Fresh Prince of Bel-Air Reunion from anywhere:

If you’re in the US, it’s really quite easy to watch the Fresh Prince of Bel-Air special episode. That’s because it’ll be broadcast exclusively on HBO Max, a service that comes with a seven-day free trial. In other words, you’re free to sign up, stream the reunion, and cancel to avoid being charged. If you decide to keep using HBO Max afterwards, it’ll cost you $14.99 USD per month. Generally, this service adds new content at midnight, so you should be able to watch whenever suits you best from November 19 onwards.

It gets even better: HBO Max is the only American streaming service that currently offers all six seasons of Fresh Prince of Bel-Air. As such, you’re covered whether you’re looking to start from the beginning or just stream a few episodes when you’re finished with the reunion episode.

HBO Max is geo-restricted and currently only available in the US. If you’re abroad at the moment, you’ll need a VPN to unblock it. ExpressVPN offers a 30-day money-back guarantee that allows you to try it risk-free. If it doesn’t meet your expectations, simply cancel before the guarantee ends to claim a full refund, no questions asked.

Where else can I watch Fresh Prince of Bel-Air online?

The main character might be from Philadelphia, but the show itself has global appeal. In fact, it’s possible to stream Fresh Prince of Bel-Air in dozens of countries around the world. Here’s how:

Canadian fans can watch the Fresh Prince of Bel-Air reunion special on November 19 — the same day that it’s made available in the US. It’ll be shown exclusively on Crave, which costs $9.99 CAD per month after a seven-day free trial.

Unfortunately, there aren’t any older episodes on Crave. For these, you’ll have to turn to Netflix. The Canadian library currently includes all 148 previous episodes of Fresh Prince of Bel-Air. If you don’t already have a Netflix account, you’ll have to pay $14.99 CAD per month, since this service no longer offers a free trial in Canada.

Remember: both of these services are region-locked. If you’re traveling outside of Canada at the moment, you’ll need a VPN to access them.

Fresh Prince fans in Australia can stream the reunion special on Stan from November 19. Usually, this service costs $10 AUD per month but if you’re not already signed up, you can just take advantage of its seven-day trial to watch for free. As long as you cancel before the week is up, your payment method won’t be charged.

Again, Netflix is the best place to watch older episodes of Fresh Prince of Bel-Air. The Australian library offers all six seasons, just like the Canadian one. Basic subscriptions start at $10.99 per month, and unfortunately, there’s no trial period anymore.

Stan and Netflix are both geo-restricted. To stream the Fresh Prince reunion on these services from abroad, you’ll have to use a VPN.

Although there aren’t any other confirmed international broadcasters for the reunion special as yet, it’s likely a deal will be agreed at some point in the future. There’s one clear reason for this: the show remains extremely popular, 30 years after it first aired.

In many countries outside of the US, Netflix is your best bet for watching past seasons of the Fresh Prince of Bel-Air.

What do we know about the Fresh Prince of Bel-Air special?

The teaser trailer gives us a pretty good idea of what to expect from the upcoming reunion episode. Essentially, the cast of the show will meet up and reminisce about the show, the characters, and the atmosphere behind the scenes. It looks extremely nostalgic, but there’s one castmate who unfortunately won’t be able to attend: James Avery, who passed away in 2013.

On the other hand, the original Aunt Vivian, Janet Hubert, will be making an appearance. This is particularly surprising given the contentious history she’s had with Will Smith (in fact, their long-running feud is allegedly what led to her being replaced back in season 4).

Is the Fresh Prince of Bel-Air coming back?

For years, series star Will Smith has been inundated with questions about when Fresh Prince of Bel-Air would return. Until recently, though, he refused to entertain the idea. However, in 2019, he saw a fanmade YouTube video that reimagined the series in a darker light and decided to pursue this with the goal of making a one-off, hour-long drama.

The plan seems to have changed again, though. Smith recently announced that NBC’s new streaming service Peacock had ordered two seasons based entirely off of this pitch, something that simply does not happen in normal circumstances. In other words, it’s been a long wait but series fans may finally have something substantial to look forward to.