How to watch Katy Keene season 1 online from anywhere

Excited for the first season of Katy Keene? Read on to find out what this show is about, when it airs, and how to live stream Katy Keene from abroad using a Virtual Private Network (VPN).
Ian Garland Streaming, Kodi and VPN Expert 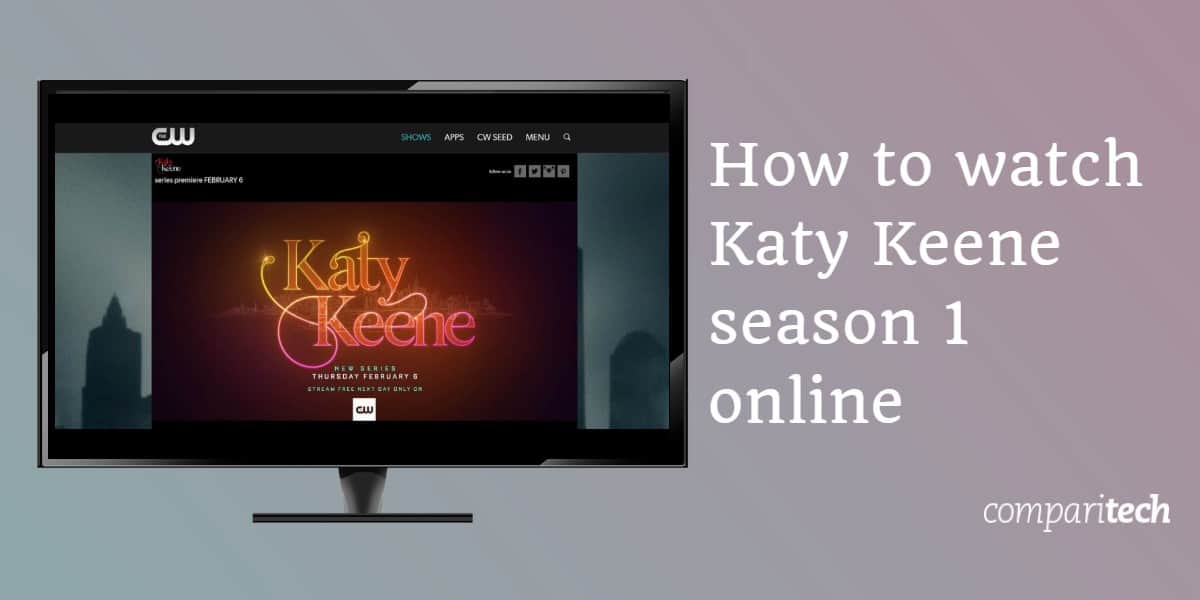 It’s been a long time coming but Katy Keene will finally premiere at 8 PM EST (5 PM PST / 1 AM GMT) on February 6. The CW has ordered fourteen episodes, to begin with, although this number could increase if Katy Keene turns out to be half as popular as Riverdale or The Chilling Adventures of Sabrina. Below, we’ll let you know how to live stream every episode of Katy Keene from abroad (outside of the US).

It’s important to note that we only recommend official sources. Although unauthorized streams will likely be available, these are a poor alternative because of their frequently laggy, low-resolution video, and their tendency to be taken offline for copyright violation. Katy Keene is being released almost simultaneously in several countries, so there’s really no reason to use unreliable, unlicensed streams.

Katy Keene season one will only air on region-locked platforms. If you’re abroad and looking to watch your usual streaming services, you’ll have to use a VPN.

How to watch Katy Keene online abroad (outside US)

Streaming services tend to find your location by checking your IP address. When you use a VPN, though, they can only see the IP address of your chosen server. This means that you can, for instance, connect to an American server to unblock US-based services from abroad. Below is a quick, step-by-step guide to setting up a VPN so you can start streaming Katy Keene.

Here’s how to watch Katy Keene online from anywhere:

As this show will air live, we strongly recommend taking a few minutes to test your VPN ahead of the premiere. This way, you won’t have to miss the beginning due to unexpected technical problems. If you need help, many VPN providers offer 24/7 support over email and live chat.

How to live stream Katy Keene season 1 on US TV

Just like Riverdale, Katy Keene will premiere on The CW. While this network’s website allows you to stream new episodes online for free, it doesn’t actually offer a live stream. The easiest way for most people to watch is simply to wait a few hours after airing, but if you can’t, don’t panic: there are a few over-the-top services that let you watch The CW online.

fuboTV, YouTube TV, AT&T TV Now, and Hulu with Live TV all carry The CW in select regions, and all offer a free trial (usually around a week).

There’s one significant difference between Katy Keene and other Archie Comics shows, though. Instead of moving to Netflix once the series is over, Katy Keene will be added to CBS All Access. Additionally, it won’t appear until 30 days before the next series begins (assuming a second season is greenlit at all).

The services above are all region-locked, so if you’d like to use them while traveling outside of the US, you’ll need a VPN. ExpressVPN comes with a 30-day money-back guarantee, allowing you to stream Katy Keene risk-free and claim a full refund if you’re unsatisfied.

Where else can I watch Katy Keene online?

There are already a couple of confirmed international Katy Keene broadcasters, and it’s likely more will be announced if the first season lives up to the hype. Take a look below to find out which networks are showing Katy Keene in your country:

In Canada, Katy Keene will air on W Network at the same time that it’s shown in the US. The problem is that this service doesn’t allow you to watch anything online. There is a workaround, however, as this channel is included in the Stack TV addon for Amazon Prime Video.

Stack TV costs $12.99 CAD per month after a one-week trial, and if you don’t already have an Amazon Prime account, you’ll have to pay an extra $7.99 per month to get one. On the plus side, your first month of Amazon Prime is free.

The above services are region-locked and only available in Canada. If you’re out of the country temporarily, you can still use them by connecting to one of your VPN’s Canadian servers.

From July 25, British fans can stream every episode of Katy Keene season one for free on BBC iPlayer. This service does require you to register before watching anything but this only takes a moment. Note that during signup, you’ll be asked to enter a British postcode; there’s no verification in place and any will be accepted.

BBC iPlayer is only available in the UK. That said, you can unblock it as normal from abroad by using a VPN.

Australian fans are used to waiting extended periods of time for shows to arrive from the US. The good news is that, when it comes to Katy Keene, they actually have quite an easy time of things. Episodes will be broadcast on FOX8 at 8:30 PM AEDT every Thursday (starting February 13). What’s more, existing Foxtel TV customers can sign into the Foxtel Go app and stream the show live at no added cost.

Don’t have cable? In that case, you can create a Foxtel Now account instead. This service costs $25 AUD per month and includes a ten-day free trial. Further, as FOX8 is included in the base subscription, you won’t have to pay for any of the extra channels.

Foxtel services are only available in Australia. That said, if you’re abroad, you should still be able to use them after connecting to an Australian VPN server.

What is Katy Keene about?

Katy Keene is another TV show based on an Archie Comics series. It follows the titular character, Katy, as she attempts to become a fashion designer in New York City. According to the lead actress, Lucy Hale, this show will have a very different tone to that of Riverdale. It promises to have a very upbeat, inspirational vibe and plenty of musical numbers (which have been slowly increasing in frequency across its sister shows, Riverdale and The Chilling Adventures of Sabrina).

Can we expect a Riverdale crossover?

Given that Katy’s roommate is Riverdale’s very own Josie McCoy, a crossover was always inevitable. However, few expected it to come so soon; Katy is set to make an appearance in an episode of Riverdale that’ll air on February 5. It’s worth noting that Katy Keene takes place five years after the events of Riverdale, though, so it’s likely that the landscape will have shifted pretty considerably.