How to watch Penny Dreadful: City of Angels online 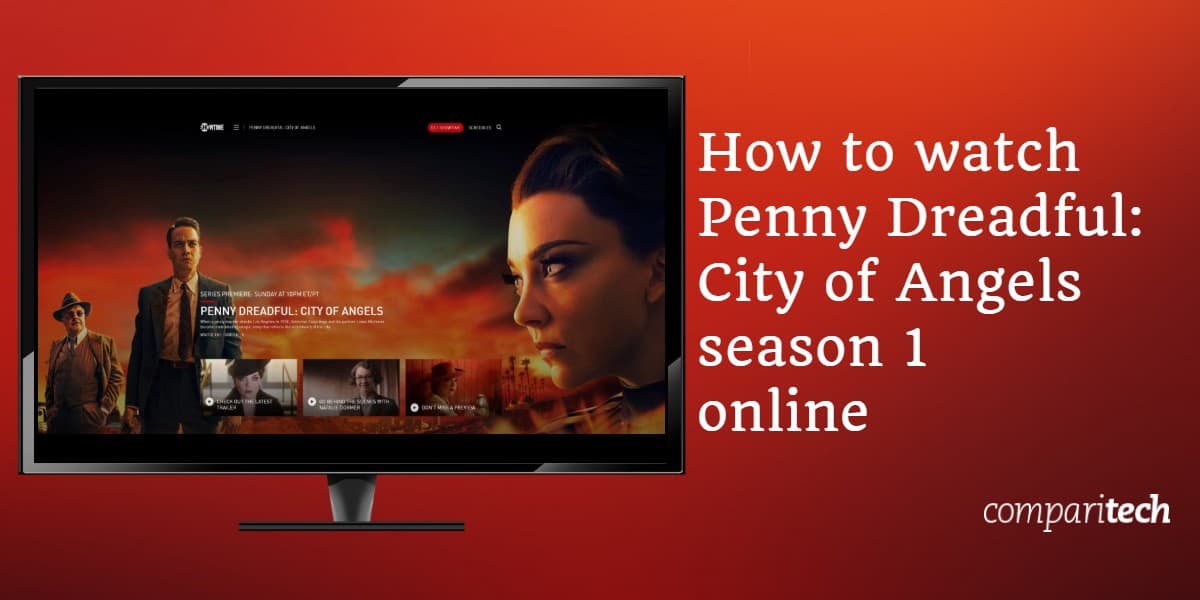 Season one of Penny Dreadful: City of Angels will premiere at 10 PM EST/PST on April 26. It will tell the story of a bitter war between the Devil and Santa Muerte set against the glitz and glamor of 1930’s Hollywood. There will be eight episodes all in all, and we’ll explain how you can watch them all live, from anywhere in the world, below.

Penny Dreadful was a fan favorite when it came out, which means that unlicensed streams will almost certainly be available for City of Angels. That said, we recommend sticking to official sources. This approach guarantees you the highest-quality stream, plus there’s no risk that the video will be taken down. Finally, Penny Dreadful: City of Angels actually has quite a strong international release, so it should be fairly easy for you to watch legitimately, wherever you are.

Note that this show will only air on region-locked streaming services. If you’d like to watch on your usual platforms while traveling abroad, you’ll have to use a Virtual Private Network (VPN).

How to watch Penny Dreadful: City of Angels abroad (outside the US)

New to VPNs? Not quite sure how they work? Don’t worry, they’re much simpler to use than you might think.

Here’s how to watch Penny Dreadful: City of Angels online from anywhere:

The first season of Penny Dreadful: City of Angels will be broadcast live, which is why we recommend testing your VPN well in advance. This reduces the chance of any last-minute technical problems and makes it far less likely that you’ll miss the start of the premiere. If you need help, most VPNs offer 24/7 support over live chat and email.

How to watch Penny Dreadful City of Angels on US TV

Showtime is the official Penny Dreadful broadcaster in the US and it’ll be showing City of Angels at 10 PM EST/PST on April 26. It gets even better: this service allows you to stream Penny Dreadful seasons 1–3 as well, making it ideal for anyone new to the series or existing fans who are looking to catch up.

Already have a cable TV package that includes Showtime? In that case, you can sign in to the website directly and watch online at no extra cost. Luckily, there are plenty of ways you can watch Penny Dreadful: City of Angels without cable too.

Showtime lets you log in with an AT&T WatchTV, fuboTV, Hulu, or YouTube TV account. The least expensive method is to sign up for Showtime Now: this costs $10.99 USD per month and comes with a 30-day free trial. You could also add this channel to your Amazon Prime TV or Hulu account but you’ll only get a seven-day trial this way.

The services above are only available in the US. If you’re currently abroad, you’ll have to use a VPN to access them. ExpressVPN offers a 30-day money-back guarantee that allows you to watch City of Angels risk-free. If you’re unimpressed, just cancel to receive a full refund.

Where else can I stream Penny Dreadful: City of Angels season 1?

The good news is that Penny Dreadful fans living outside of the US won’t have to wait too long to start watching. Take a look below to find out when and where you can live stream Penny Dreadful: City of Angels in your country:

City of Angels season one will be broadcast simultaneously in Canada and the US. Canadian viewers can stream it live from 10 PM EST on April 26, exclusively on Crave. If your existing cable TV plan includes Crave, you’re free to watch online at no added cost. Alternatively, you can sign up for an online membership; prices start at $9.99 CAD per month and only the base plan is required to stream all three seasons of Penny Dreadful and its spinoff.

Crave is geo-restricted and usually only accessible in Canada. However, if you’re abroad, you can use it as normal by connecting to one of your VPN’s Canadian servers.

For once, Australians will be able to watch a popular TV show without having to avoid spoilers for weeks after it premieres. That’s because Stan will be broadcasting Penny Dreadful: City of Angels from April 26 — the same day that it’s shown in the US. This service comes with a 30-day free trial, after which it costs $10 AUD per month. As a bonus, it also allows you to watch the first three seasons of Penny Dreadful.

Stan is region-locked, which means that if you’re outside of Australia, you’ll need a VPN to access it.

Unfortunately, City of Angels won’t be coming to the UK until some time in July. That said, we know that it’ll be airing on Sky Atlantic, just like Penny Dreadful did. This means that existing Sky TV customers can log in and watch via the Sky Go app.

Sky Go and Now TV are both geo-restricted, so if you’re outside the UK, you’ll need a VPN to watch.

What do we know about Penny Dreadful: City of Angels?

First off, City of Angels isn’t exactly a sequel to the original series. It’s set in the same universe, but the characters and settings are different. Considerably different, in fact: we’re swapping Victorian England for 1930’s Los Angeles, after all. The main focus will be on a battle between Santa Muerte and the Devil, although there will also be elements of historical fiction, which are near-unavoidable given the significance of this time period in American history.

The cast features quite a few recognizable faces, most notably Game of Thrones’ Natalie Dormer, who plays no less than four characters this time around. Daniel Zovatto (It Follows) stars as Tiago Vega, the first Mexican-American detective the LAPD has ever had, but the supporting cast is no less impressive and includes drama veterans Michael Gladis (Mad Men), Kerry Bishé (Argo), and Lorenzo Izzo (Once Upon a Time in Hollywood).