How to watch The Real Housewives of Atlanta season 12 online 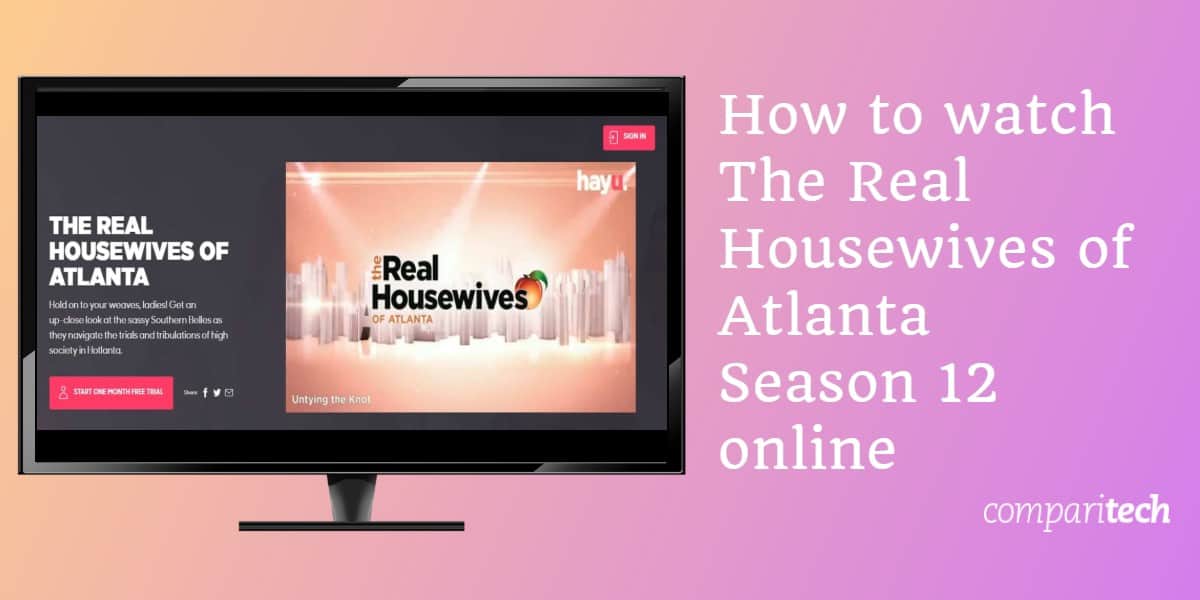 Season 12 of The Real Housewives of Atlanta will premiere on November 3 at 8 PM EST (5 PM PST / 1 AM GMT). While we don’t know how long season 12 will run for, there have been at least 20 episodes in each of the last eight series. With one new episode per week, it’s likely to run until at least March 2020. Below, we’ll explain how to watch The Real Housewives of Atlanta online from abroad, so you never have to worry about missing any of the action.

You should note that we’ll only be recommending official RHOA broadcasters. Unofficial streams will likely be available, but we advise against using these for several reasons. First, they often only offer laggy, low-resolution video. Additionally, unauthorized streams can be taken down for copyright violation at a moment’s notice. There are several legitimate ways to watch The Real Housewives of Atlanta abroad anyway, meaning there’s no need to resort to shady, unlicensed streams.

This show will only be broadcast on region-locked streaming services. As such, you’ll need a VPN to watch The Real Housewives of Atlanta season 12 abroad.

Most streaming platforms check the user’s IP address to see which country they’re in. However, VPNs allow you to spoof your location and use these services abroad by sending all of your traffic through a server elsewhere in the world. Don’t worry, this is easier than it sounds; just follow the steps below.

Here’s how to watch The Real Housewives of Atlanta online from anywhere :

New episodes of The Real Housewives of Atlanta will air live. For this reason, we strongly recommend taking a few minutes to make sure your VPN works before season 12 is due to begin. This ensures that you’ll have plenty of time to raise any technical problems with customer support and won’t have to miss the start of the premiere.

We’ve listed where The Real Housewives of Atlanta is shown by country. If you are abroad you will need a VPN to connect to your home country option.

How to watch The Real Housewives of Atlanta on US TV

American fans can stream new episodes of The Real Housewives of Atlanta live on Bravo. However, you’ll need a cable TV subscription to do so, regardless of whether you want to watch live or on-demand. On the plus side, episodes are available for at least a month after airing so it’s not a problem if you miss one.

Want to watch The Real Housewives of Atlanta season 12 without cable? Several major over-the-top services allow you to watch Bravo live, including fuboTV, Sling TV (blue package), Hulu with Live TV, AT&T TV NOW, YouTube TV, and PlayStation Vue. Most of these services come with a free trial, but we’d recommend using Sling TV. At $15 USD per month, it’s the least expensive way to watch in the long-term.

The above services are all region-locked and only available in the US. This means that you’ll need a VPN to access them abroad. ExpressVPN offers a risk-free 30-day money-back guarantee, allowing you to try the service out and claim a full refund if you’re unsatisfied.

Where else can I live stream The Real Housewives of Atlanta online?

This might be a pretty US-centric show, but it has fans all over the world. Take a look below to find out how you can watch RHOA in your country:

Hayu will be broadcasting The Real Housewives of Atlanta season 12 in Canada. This service costs $5.99 CAD per month (although your first month is free) and will upload new episodes every Monday, the day after they air in the US.

Looking to catch up on older episodes while you wait? Hayu’s Canadian library currently includes all eleven previous seasons. Note that Hayu’s available content changes based on your location, so you’ll likely need a VPN to watch RHOA from abroad.

It’s actually quite easy to stream The Real Housewives of Atlanta if you’re in Australia. New episodes from season 12 will air at 8:30 PM AEST on Fox Arena, starting November 4. That’s just one day after they air in the US; not bad considering Australian fans often have to wait months for shows to arrive.

If you’re already a Foxtel TV customer, you can just sign into the Foxtel Go app and watch live online at no added cost. Don’t have cable? In that case, you can just sign up for Foxtel Now instead. This service costs $25 AUD per month and includes a ten-day free trial. This is a pretty expensive way to watch, though, especially considering Hayu Australia will have the same content at the same time for just $6.99 per month (with a one-month trial).

Foxtel Now, Foxtel Go, and Hayu are all region-locked, so if you’re outside of a supported country, you’ll need a VPN to access them.

Currently, there’s no confirmed season 12 broadcaster in the UK. However, Hayu is releasing new episodes in several countries outside of the US. As such, it seems likely that British fans will be able to watch on Hayu, possibly as early as November 4.

Hayu costs £4.99 per month on its own but it can be added to your Now TV or Amazon Prime Video account for £3.99. You’ll have access to all eleven previous seasons regardless of which platform you use, although if you sign up directly, you’ll get a one-month trial instead of just seven days.

All of the above services are geo-restricted, so you’ll have to either be in the UK or connected to a British VPN server to access them.

What can fans expect from season 12 of The Real Housewives of Atlanta?

The trailer for season 12 of The Real Housewives of Atlanta shows tempers flaring, but also a few more real moments, including when NeNe raises the prospect of an open marriage with Gregg. It won’t be all drama, all the time, though, as the ladies have recently been spotted in Greece, making a mid-season vacation all but inevitable.