How to watch Schooled season 2 online free (from anywhere)

Not sure how to watch Schooled season 2 online? We’ll explain how connecting to a VPN allows you to unblock and live stream region-locked content such as Schooled online from abroad (for free!).
Mark Gill TECH JOURNALIST, VPN AND PRIVACY SPECIALIST 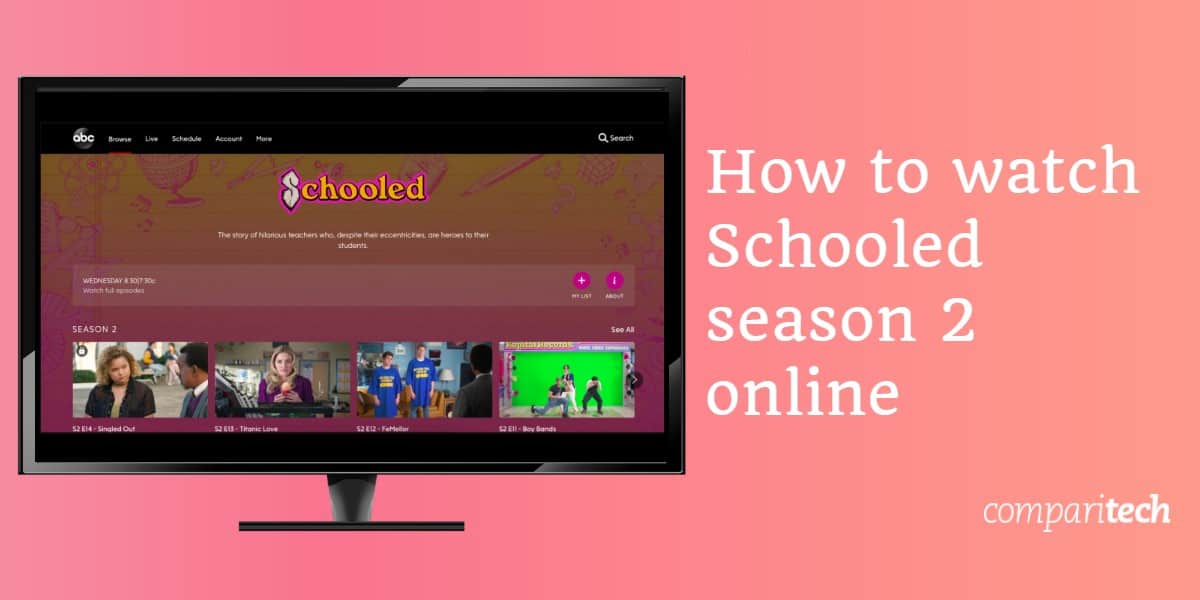 Schooled season 2 will make its UK premiere on Wednesday, February 19, at 8.30 PM GMT. This The Goldbergs spin-off has already been available in the US (on ABC) for some months. However, Schooled season 2 will finally be available to watch for free via Channel 4’s All 4 VoD service. Read on to find out how you can live stream every episode of Schooled, from anywhere (even abroad), using a Virtual Private Network (VPN).

Note that Schooled season 2 is only available on region-locked platforms. To watch it via your regular home streaming services while abroad, you’ll need the help of a VPN.

How to watch Schooled season 2 online with a VPN

When you connect to a VPN, websites can only see the IP address of your chosen server. As this is frequently used to find your location, you can easily access blocked content from abroad. VPNs also encrypt your data, so you’re not just hiding your location; you’re also increasing your online privacy.

Here’s how to watch Schooled season 2 online free (from anywhere):

Schooled Season 2 will air live on E4. To watch Schooled online, you should test your VPN with All 4 ahead of time. This gives you enough time to get in touch with your VPN’s customer support on the off chance you encounter an issue.

How to watch Schooled season 2 on UK TV

The best way to stream Schooled season 2 is on Channel 4’s All 4 video-on-demand service. That’s because All 4 content is free to watch. The first episode of Schooled season 2 will air on Wednesday, 19 February at 8.30 PM GMT. To watch online, you’ll need to create a free account, which requires you to provide your name, email address, date of birth, gender, and address. Although you’re asked to give a UK postcode, any UK postal code is accepted.

It’s also important to know that All 4 content is region-locked. To watch it when traveling abroad, you’ll need to use a VPN. By connecting to a server in the UK, you can get a British IP address. This will allow you to unblock All 4 from anywhere in the world. ExpressVPN works with All 4 and includes a 30-day money-back guarantee. This means you can try it out risk-free and claim a full refund if you’re unsatisfied.

Where else can I watch Schooled season 2?

There are multiple ways to watch Schooled season 2 (free and paid). Here you’ll find the best of them:

While Schooled season 2 is available on All 4 for free, it was first shown on ABC (its original network) in September 2019, with a new episode airing each week. As a result, if you have a US cable TV subscription, you can watch Schooled season 2 on ABC at no extra cost. All you need to do is sign in to ABC using the login details (a username or email address and password) you use with your TV provider.

Fortunately, it’s also possible to stream ABC cable-free. You can do this via the following streaming services: AT&T TV Now ($65 USD/month), Hulu with Live TV ($54.99/month), or YouTube TV ($49.99/month). These streaming services (along with ABC) are all geo-blocked which means a US IP address is required to unblock their content abroad. To do this, all you need to do is connect to a server in the US through a VPN service.

Schooled Season 2 is available on Global in Canada. You’ll need to sign in with a TV provider in order to watch live TV as well as most of this platform’s on-demand content. However, the good news is that new episodes are free to watch on-demand for the first seven days after airing — all without having to sign in. Global is only available in Canada. You can stream this geo-restricted content abroad by connecting to a VPN server in Canada for a Canadian IP address.

What should I know about Schooled season 2?

Schooled Season 2 consists of 15 20-minute episodes, and the first is titled “Dangerous Minds”. This 1990s spin-off of The Goldbergs continues to follow the eccentric faculty of William Penn Academy (which The Goldberg children all previously attended), all of whom have very different ideas on how to mentor their students.

Which cast members are returning for Schooled season 2?