How to watch Veep Season 7 outside the US

Would you like to stream Veep season seven live? Outside of the US? Don’t worry: we’ll let you know how to live stream Veep from anywhere with a Virtual Private Network (VPN).
Ian Garland Streaming, Kodi and VPN Expert 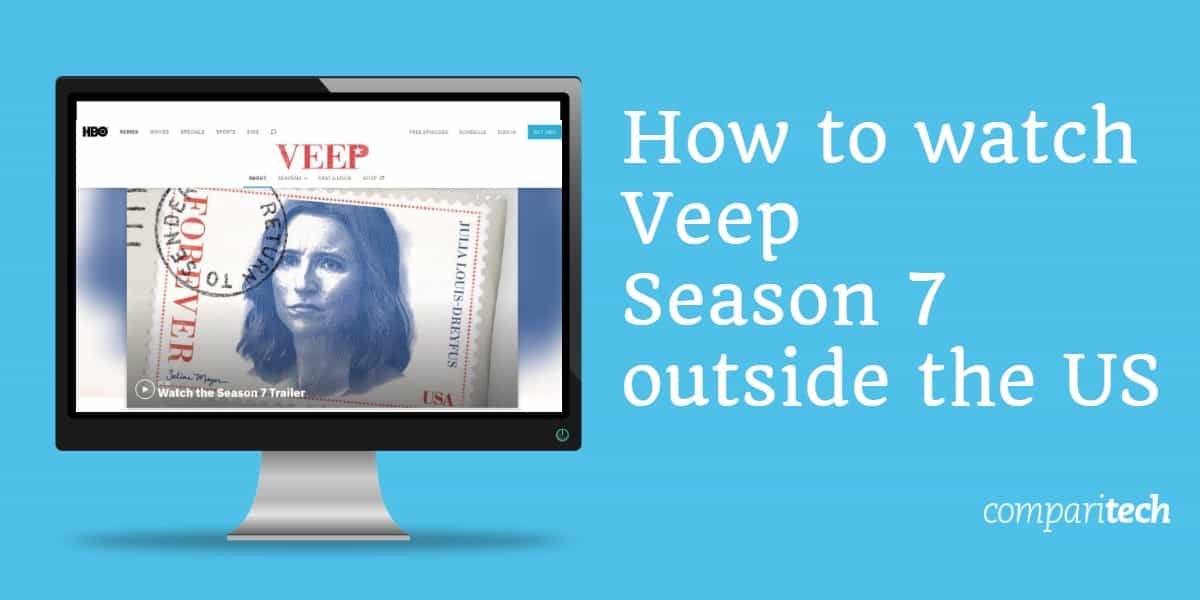 Veep’s seventh series started on March 31. Unlike previous seasons, this one will have just seven episodes instead of ten. A new episode will be released every Tuesday at 7:30 PM PST (10:30 PM EST / 3:30 AM BST). We might already be a few episodes in but there’s still plenty to look forward to and below, we’ll explain how you can stream Veep live, from the UK, Australia or anywhere else abroad (outside the USA).

This post will only recommend official sources. Veep is a hugely popular show, and as such, unlicensed streams are almost inevitable. However, we strongly advise against using them for several reasons. First, they often have laggy, low-resolution video. Unauthorized streams are also prone to being taken offline for copyright violation, so you might not even see the end of an episode, let alone the season. With so many legitimate ways to watch, there’s no need to resort to shady, unlicensed streaming sites.

Many of the platforms showing Veep are region-locked, so you’ll need a VPN to access them abroad.

VPNs encrypt your traffic, preventing it from being read by your employer, Internet Service Provider (ISP), or government. However, they’re also great for streaming since they enable you to change your IP address. This tricks streaming platforms into thinking you’re in another country and allows you to access geo-blocked services from outside of their intended broadcast area. We recommend ExpressVPN; it’s a fast, reliable, and secure service with excellent unblocking ability and a network of over 3,000 servers in 94 countries.

Signing up for ExpressVPN only takes a minute. Just choose your preferred subscription length (one, six, or twelve months) and complete the checkout process. Not sure if this VPN is right for you? ExpressVPN has a 30-day money-back guarantee so if you’re unsatisfied in any way, you can cancel and receive a full refund, no questions asked.

How to watch Veep abroad with a VPN

VPNs can seem a little intimidating at first, but they’re actually simple to use. Follow the steps below to unblock and stream Veep season seven from anywhere in the world:

If you’d like to watch Veep live, we strongly recommend running through the steps above before the show actually begins. This way, if you run into any problems, you should still have enough time to contact your VPN’s customer support team for help. Additionally, this lowers the chance of you missing the beginning of an episode due to technical difficulties.

How to stream Veep season 7 online

Veep has a massive international following, so it’s only natural that its final series should be broadcast in several regions worldwide. Below, we’ll let you know which networks are showing the seventh season of Veep in your country.

HBO has exclusive broadcasting rights to Veep in the US. If you have a cable TV subscription which includes HBO, you can sign into HBO Go and stream new episodes shortly after they’ve ended at no extra cost. Luckily, there are plenty of ways to watch, even if you don’t have cable.

You could sign up for HBO Now, for instance. This service costs $14.99 USD per month and includes a seven-day trial. While this isn’t long enough to stream the remainder of season seven, HBO Now’s on-demand library currently includes every prior episode of Veep, making it a great way to catch up for free.

If you’d prefer to watch live, you can purchase the HBO addon for Hulu, PlayStation Vue, or Amazon Prime Video ($14.99 per month). HBO is also included in DirecTV Now packages, and although these are more expensive (starting at $50), they come with a one-month trial, which is almost long enough to watch the remainder of the new season for free. While many of these platforms require a payment method linked to a US address, Hulu accepts gift cards, meaning you can technically sign up from anywhere.

The streaming services above are only available in the US. that said, you can still access them from abroad using an American VPN server.

Veep season seven premiered on April 3 in the UK. Sky Atlantic is airing a new episode every Wednesday night at 10:10 PM BST (2:10 PM PST / 5:10 PM EST). If you already have a Sky TV package, watching live is as simple as signing in to the Sky Go app. Additionally, Sky allows you to watch all six previous seasons for free on-demand.

Don’t have cable? No problem: Now TV lets you stream Sky Atlantic live, meaning you can watch Veep without waiting for it to be added to the service’s extensive on-demand catalog. Now TV costs £7.99 per month and comes with a seven-day free trial. It offers every single episode of Veep to date, and while each is available for a few months, they will disappear eventually. Episodes from season seven will remain on Now TV until July 30.

You should note that the law requires you to have a TV license in order to watch shows online as they’re broadcast on TV. Sky Go and Now TV don’t make this obvious, though, and as neither service actually checks, they essentially run on an honor system.

Sky Go and Now TV are region-locked. As such, you’ll have to either be in the UK or using a British VPN server to use them.

In Canada, only one network will show Veep’s seventh season: Crave. If you have a cable TV subscription, you’ll likely be able to log in and start streaming immediately. If not, you can sign up for an online-only pass. These cost $9.99 CAD per month, and include a one-month free trial. Additionally, Crave’s on-demand library includes every previous episode of Veep.

There is a way to watch the entire season for free, but it requires a little patience. If you wait until May 12, you can register, quickly stream the first few episodes of the new series on-demand, and watch the remainder live. Just remember to cancel your subscription after the final episode ends to avoid being charged.

Crave allows you to pay via gift card, though, so it’s possible to sign up from anywhere. The service is geo-restricted, however, so you’ll need a VPN to watch from outside of Canada.

Foxtel is the only broadcaster showing Veep’s final season in Australia. Episodes air every Tuesday at 7:30 PM AEST, and are available on-demand the following day. Already a Foxtel TV customer? If so, you can simply sign in to the Foxtel Go app and start streaming.

If you don’t have cable (or if you’re with a different provider), you can register for Foxtel Now instead. This service costs $25 AUD per month, and as Veep is included in the base channel pack, you won’t have to pay extra for any addons. There’s also a 10-day free trial, during which you’ll have access to every channel.

Foxtel Now requires you to enter an Australian phone number during registration, so it’s difficult for foreign users to gain access. Australians who are currently abroad can sign up and use the platform as normal with a VPN, however.

What do we know about Veep’s seventh season?

Details are scarce at the moment, but we do know a few things about season seven of Veep. First, this will be the show’s final series as Veep’s executive producer, David Mandel, wanted to avoid the all-too-common scenario wwherein a show outlives its welcome.

There are big changes coming for Selina (Julia Louis-Dreyfus). Season seven will see her officially launch her presidential bid while struggling with issues closer to home. Worse, she’ll be going up against Jonah Ryan, who, while a fairly annoying character, has real experience and influence in the political sphere.

In an interview with TV Guide, Louis-Dreyfus claimed that the show’s ending caught her by surprise, with Mandel cryptically claiming that it’s “the right ending for America”. We’re not quite sure what this means but with just a few months left until the series ends, we’re looking forward to finding out.