How to watch BBC iPlayer in the USA for free

Looking to watch the BBC iPlayer in the USA? Perhaps you’d like to watch Doctor Who live or catch up on Fleabag? Today, we’ll explain how to stream BBC for free in America or any other country using a Virtual Private Network (VPN).
Ian Garland Streaming, Kodi and VPN Expert 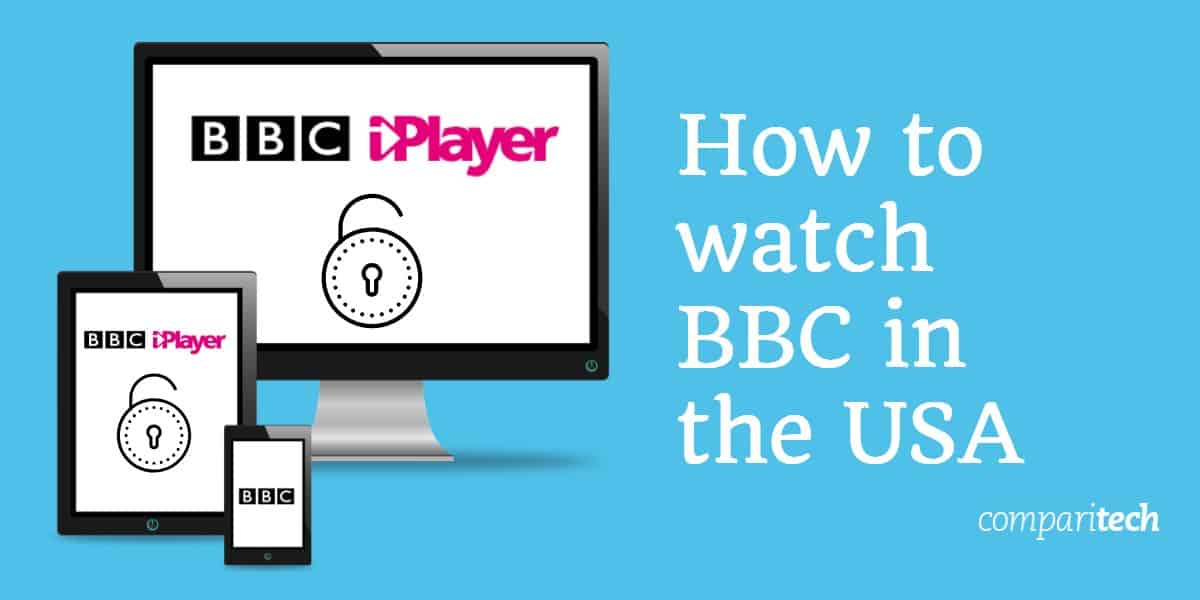 You can watch BBC iPlayer for free in the USA if you use a VPN, however many VPNs are blocked by the BBC. Read on to see which VPNs work and how to use them.

VPNs encrypt your traffic, preventing your activities from being monitored by hackers, your Internet Service Provider (ISP), your employer, or the government. However, they have another major benefit: they allow you to change your IP address. As streaming platforms often rely on the user’s IP address to verify their location, accessing geo-blocked services abroad is as simple as connecting to a server in the appropriate country.

BBC content is available online via BBC iPlayer, this includes content from BBC One and other BBC channels. The BBC invests a huge amount of resources into improving its geo-restriction measures, so not all VPNs can unblock the online streaming platform.

However, there are a select few VPNs that can reliably access BBC iPlayer in America and while we’ve reviewed each of these in greater detail further down, you can find a brief summary of each below:

How to watch BBC iPlayer in America

It’s actually very simple to bypass regional restrictions with a VPN. Below, we’ll explain how you can use BBC iPlayer and a VPN to stream the BBC live in the USA.

Here’s how to watch BBC iPlayer in USA:

GET A PAID VPN FREE: If you only need short-term VPN coverage, you can take advantage of ExpressVPN’s 30-day money-back guarantee. While you’ll have to pay upfront, you can cancel at any point during this period to claim a full refund, no questions asked. In practice, this means you can stream the BBC free for a month.

Choosing the right VPN for watching the BBC abroad

With so many different VPN providers all claiming to be the best, it can be difficult to decide which one to use. To find the best VPNs for streaming the BBC in the US, we chose to only recommend services with all of the following characteristics:

Best VPNs for watching BBC in the USA

Below, you’ll find our list of the best VPNs for watching the BBC in the USA:

ExpressVPN has more than 3,000 servers in 94 countries worldwide, including the UK. This service can reliably unblock streaming platforms that many other VPNs struggle with, including BBC iPlayer, ITV Hub, and Netflix UK. Best of all, it’s fast enough to stream live HD content with no noticeable stuttering or buffering whatsoever.

This VPN service includes 256-bit encryption, DNS and IPv6 leak protection, perfect forward secrecy, and a kill switch (which halts all traffic whenever you disconnect unexpectedly), to keep your activities private at all times. ExpressVPN doesn’t log any data that could identify you, but it’s possible to register almost completely anonymously with Bitcoin and a throwaway email address for an additional layer of privacy. Support is available 24/7 over live chat in case of any issues.

ExpressVPN apps are available for Windows, MacOS, Linux, Android, and iOS. Plans include access to custom router firmware to make protecting all of your devices as easy as possible.

BEST VPN FOR THE BBC:ExpressVPN is our #1 choice. It offers high-speed connections, powerful security and privacy features, and excellent unblocking ability. Further, with a 30-day money-back guarantee, you can try this service risk-free.

NordVPN has more than 5,400 high-speed servers spread over 62 countries, including 707 in the UK alone. It’s able to bypass even the most stubborn geo-blocking measures, meaning you’ll be able to access services like Amazon Prime Video, Netflix UK, and BBC iPlayer from anywhere in the world. NordVPN allows up to six simultaneous connections, so it’s ideal if you’re looking to protect all of your devices at once.

This service puts major emphasis on your security. Its features include 256-bit encryption, an app-specific kill switch, a malware scanner, an adblocker, and protection against DNS, IPv6, WebRTC, and port-forwarding leaks. Users can choose to access Tor over VPN or use multiple VPNs simultaneously for added protection. NordVPN has a strict no-logging policy so your privacy is in good hands. Customer support is available 24/7 via live chat.

NordVPN has apps for Linux, MacOS, Windows, iOS, and Android. Manual installation is required for use on home routers.

BEST BUDGET VPN:NordVPN is a fast, inexpensive, privacy-oriented service that takes your security seriously. Better still, its plans include a 30-day money-back guarantee.

CyberGhost offers access to 486 British servers, and more than 5,000 others in a further 88 countries. This service is extremely user-friendly; each server shows its current load and the streaming service it’s designed to unblock. With high speeds and up to seven simultaneous connections, CyberGhost ensures you’re free to stream the BBC flawlessly at home or on the go.

This VPN makes it as easy as possible to stay safe online. It protects your data using 256-bit encryption, an always-on kill switch, and protection against IPv6 and DNS leaks. That’s not all: it automatically blocks ads and scans for malware. CyberGhost logs no personally identifiable information but you can pay in Bitcoin for added anonymity. If you run into any issues, you can contact customer support over live chat, 24/7.

Easy-to-use apps:CyberGhost boasts high-speed connections, comprehensive security, and the ability to unblock the BBC anywhere. It comes with a 45-day money-back guarantee.

PrivateVPN has just 88 servers in 57 countries (six in the UK), but it makes up for its smaller network by providing faster speeds than many similar services. Additionally, PrivateVPN reliably unblocks not just the BBC iPlayer, but also Netflix UK, ITV Hub, and All 4. This service allows six devices to be connected at once.

With 256-bit encryption, DNS, WebRTC, and IPv6 leak protection, and a kill switch (Windows only), PrivateVPN guarantees your traffic is kept secure at all times. Your activities can’t be traced back to you (whether you pay in Bitcoin or not), thanks to this service’s zero-logs policy. Live chat is available for 22 hours each day (it’s offline from 1-3PM PST), and with your permission, the staff can remotely configure the software for you.

PrivateVPN has Windows, Android, MacOS, and iOS apps. It works on Linux-based platforms and wireless routers with manual configuration.

VyprVPN currently has more than 700 servers in 64 countries including the UK. This service offers consistently high speeds and can easily unblock popular streaming platforms including Netflix UK, ITV Hub, and of course, BBC iPlayer. Three simultaneous connections are permitted although this increases to five for premium subscribers.

This service uses 256-bit encryption, a kill switch (in desktop apps), perfect forward secrecy, and DNS leak protection by default. It can obfuscate your traffic using its proprietary Chameleon protocol, making it harder to detect that you’re using a VPN. VyprVPN does not log any personal information, making you almost complete anonymous online. Support is available via live chat, 24/7.

VyprVPN provides apps for Blackphone, Android, iOS, Windows, and MacOS. It can be manually installed on Linux devices and select internet routers.

ADVANCED SECURITY:VyprVPN is a security-focused provider with high speeds, strong unblocking potential, and a no-logs policy. It even offers a three-day free trial.

Can I watch the BBC abroad with a free VPN?

Free VPNs can be tempting, but we advise against using one for several reasons. The first is their performance; free VPNs rarely have enough servers to support all of their users, and this manifests as slow speeds. Streaming is fairly data-intensive, particularly at higher resolutions, and as such, it’s likely you’ll experience choppy playback, subpar video quality, and long buffering times. Further, the BBC regularly updates its geo-blocking measures so there’s a good chance you won’t be able to access BBC iPlayer at all with a free VPN.

These services might be free to use, but they are businesses and as such, exist to make money. Most use an ad-supported model or offer perks like higher speeds for a monthly fee, but some resort to shadier practices. Some services store tracking cookies on your device to see which sites you visit, and sell the resulting consumer profile to advertisers. This takes control over who sees your data out of your hands, which is the exact opposite of what a VPN is supposed to do.

Unfortunately, it’s difficult to even tell if you are using a safe VPN or not. Researchers recently tested 283 free VPN apps and found that almost 40% contained malware, 84% were vulnerable to IPv6 leaks, and 18% used no encryption whatsoever. Well-known services aren’t necessarily safer; in 2015, Hola was caught selling user bandwidth to help run a botnet.

Using a reputable VPN with a clear, customer-first privacy policy is the best way to stay safe online.

Creating a new BBC account is easy and only takes a few minutes. First, go to the login page and click Register Now. You’ll be asked to enter details including your date of birth, email address, and postal code. This last step isn’t much of a deterrent for overseas viewers, however, as any UK post code is accepted, and you don’t have to prove your location in any way. When you’re done, click Register, and verify your email address.

British law requires you to have a TV license to watch anything on the BBC iPlayer. While this service does sometimes show a popup making you aware of this, it doesn’t appear every time you try to watch something and as such, is easy to forget. The iPlayer doesn’t actually check whether you have a TV license or not and relies entirely on an honor system.

VPNs enable you to do more than just watch the BBC in the USA. Worried about having access to your RBS, Santander, or Halifax bank account limited because you logged in from another country? Just connect to a British VPN server first and it’s likely your bank’s automated system won’t even realize you’re actually somewhere else. You can also use this method to access betting sites like Ladbrokes and William Hill from outside of the UK.

As your traffic is often routed through a server in a completely different country, you can use a VPN to bypass any web filtering imposed by your workplace, or the government. Public wifi networks are often less secure than they should be, which means they’re a prime target for hackers. However, when connected to a VPN, you’ll know for certain that your activities are safe from prying eyes.

Which BBC channels and shows can I watch with a VPN?

The BBC offers a huge variety of content ranging from soap operas to gritty dramas. Below, we’ve listed the BBC channels you can stream live and some of the shows you can watch on the BBC iPlayer: